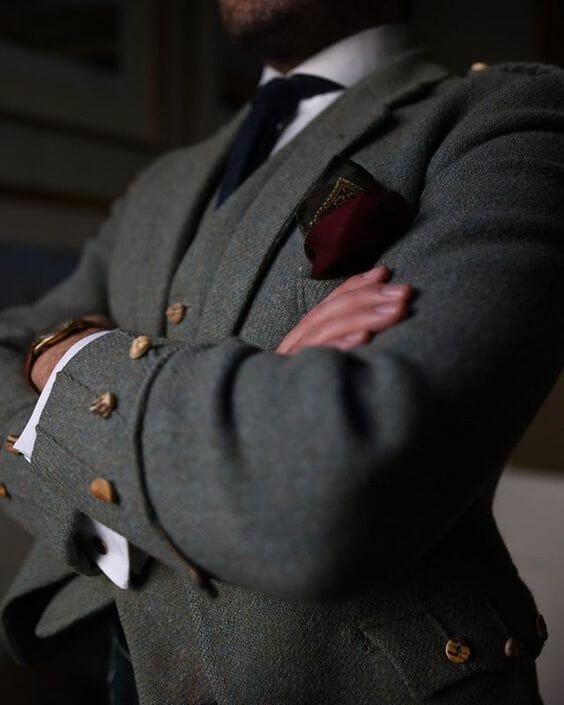 As weve just mentioned, buttons are (often) small objects that make a big difference. The mere presence of buttons on the collar of a button-down shirt, for example, make said shirt stand out from other styles. With that said, lets jump into the various ways that buttons can impact a garmentbeginning with quantity.

The Number of Buttons

The first way that buttons affect the appearance of clothes is by their sheer number. As mentioned above, their presence on a button-down collar has an immediate impact, making the shirt less formal while also placing your outfit in the realm of American Ivy style. Similarly, a single-button tailored jacket looks different than a two-button, three-button, or three-roll-two style of jacket, as the location of the buttoning point affects the length of the lapels and how long an open V youll have at the front. The change in appearance related to the number of buttons is perhaps even more obvious with double-breasted jackets and overcoats, which come in permutations of six buttons with two functional (62), four buttons with two functional (42), 63, 41, and various other configurations.

Various double-breasted jackets: a classic 62, a 41 and what looks like an 82.

A less obvious place where the number of buttons comes into play is on dress trousers, which usually have many buttons to close the waistband and/or the fly (or to affix suspenders/braces). Buttons on the back pockets are also mostly an ornamental detail to decorate your rear end and dont have much of a functional purpose (other than perhaps giving the slightest bit more protection to a wallet). 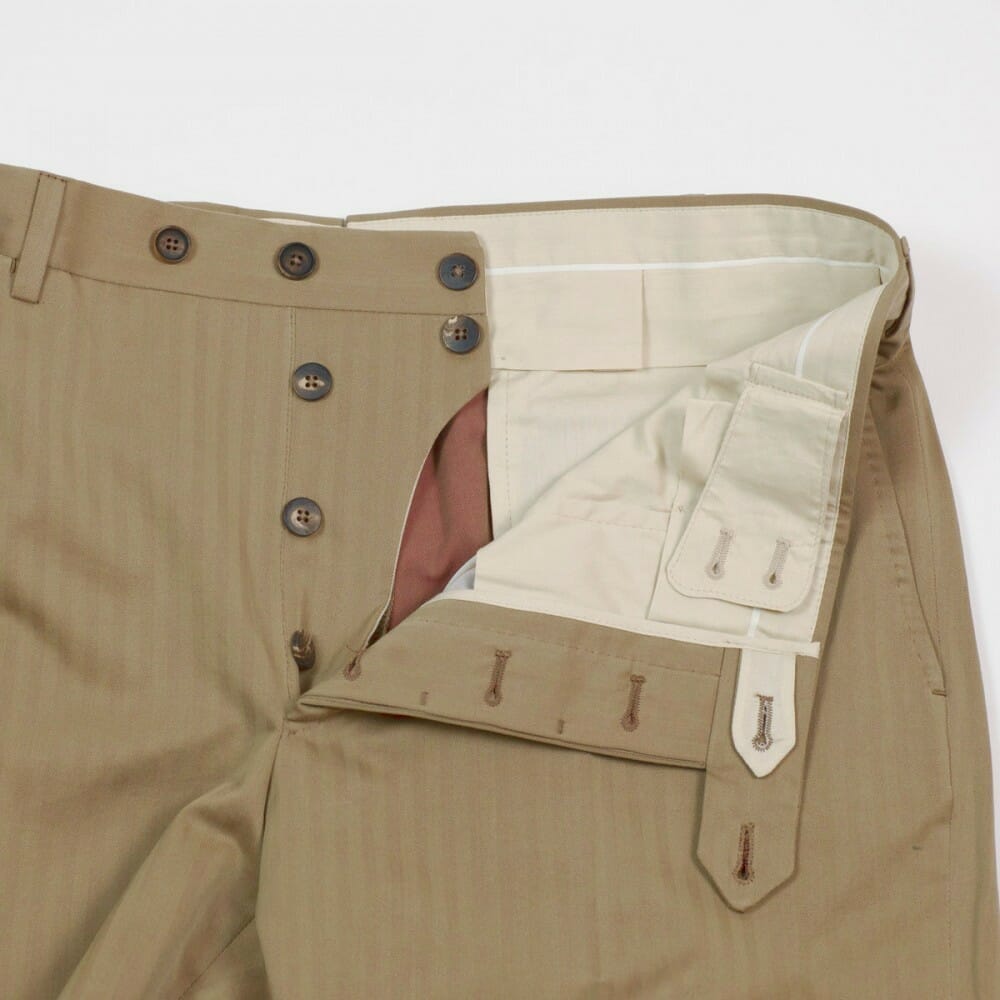 Multiple button closures on a pair of custom Luxire trousers

Aside from shirts, jackets, and trousers, buttons can appear on other garments, as well. Waistcoats have their own distinct buttoning rules, overcoats feature much the same button styling as jackets, and buttons can even be seen on such garments as gloves and traditional button boots (the latter now confined mostly to formal daywear). 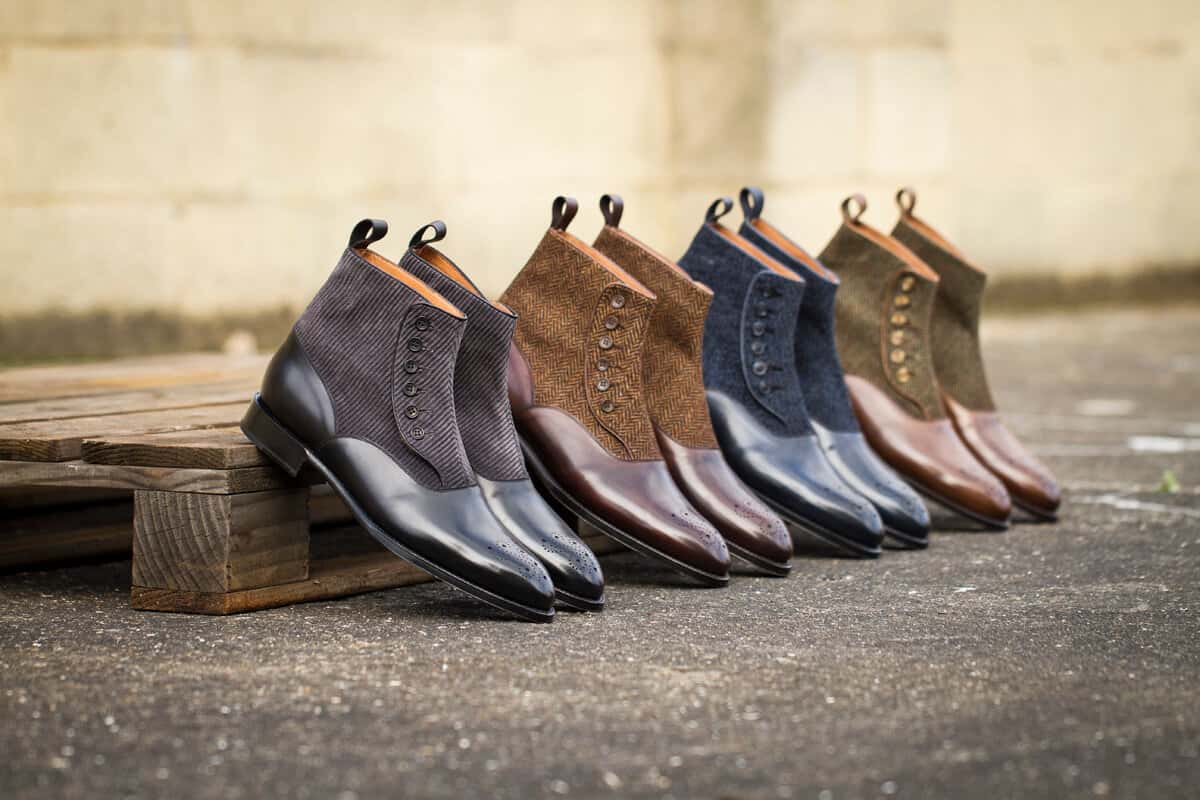 An array of button boots from JFitzpatrick

Unbuttoning always impacts your style by being more casual and, sometimes, showing a dash of that casual nonchalance called sprezzatura. Buttoning, on the other hand, always equals greater formalitywhen you wear a suit and are standing up, youre supposed to close some of the button(s) on the jacket. Not doing so flaunts the rules and shows a more relaxed attitude. The same applies if you have working buttons on the sleeves of a sport coat or suit jacket, also known as surgeons cuffs. Leaving one unbuttoned presents a rakish attitude. Ditto if you open the second button on your shirt collar or leave the buttons on a button-down shirt collar unfastened. We dont recommend leaving a button fly on your pants open, of course!

When you buy a dress shirt, most of the time the buttons will be an innocuous and unnoticeable off-white. On dark shirts, youll often see dark buttons for the same reason. However, buttons can strongly impact the style if you get them in a contrasting color and make them stand out. On a shirt, this means something like white buttons on a navy shirt or black ones on a white shirt. Be aware that as soon as you have contrasting buttons on a shirt, it immediately becomes informal, and therefore more appropriate for drinks after work than the workplace itself. 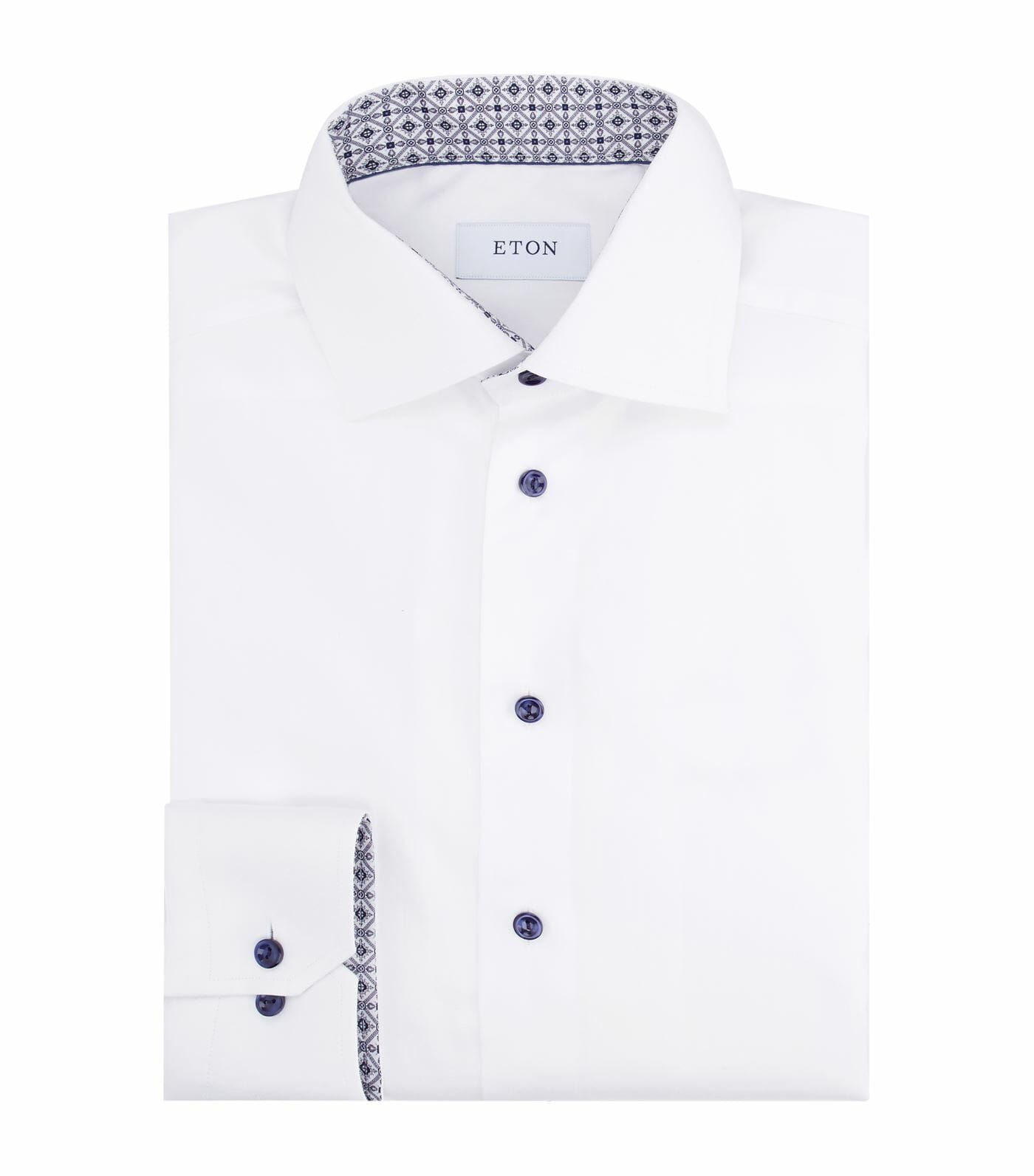 The same effect can be had with sport coats as well, with the contrast most suitable for fun summer jackets in fabrics such as wool hopsacks or linens, since they evoke a Neapolitan vibe more suited for hot sunny weather. However, contrasting buttons are most commonly seen on formal navy blazers, which generally have wider three-season use. In fact, contrasting buttons in either mother of pearl or embossed metal (brass, silver, or pewter) are actually one of the technical features that define what a blazer is. The term blazer is meant to capture the assertive boldness of the garment, and such buttons, which can also be embossed with anchors or other emblems, are a key part of that.

Most of the time, with suit jackets or sport coats, your buttons will not be the same color as the cloth, but neither will they be strongly contrasting. For example, you might have black buttons on a grey suit, or brown buttons on a navy one. Both colors are dark and subdued. In these cases, first of all, you have the ability to coordinate your outfit using the button colors. For instance, by wearing pants or a tie in the same color family as those brown buttons on your navy jacket, you can tie together the various parts of your ensemble. So, dont overlook the possibilities for coordination that buttons provide.

If you call attention to your buttons as a style feature, the quality of their make matters. Cheap buttons made in plastic come with cheaply tailored shirts and should be avoided as a general rule. The low quality will either be noticeable or, at the very least, will not enhance your style. Indeed, one of the big (and fun) decisions of getting bespoke items made is choosing the button material. Quality clothing comes with quality buttons made in natural materials. The added labor and cost involved make them more desirable, but the natural appearance is the true selling point. 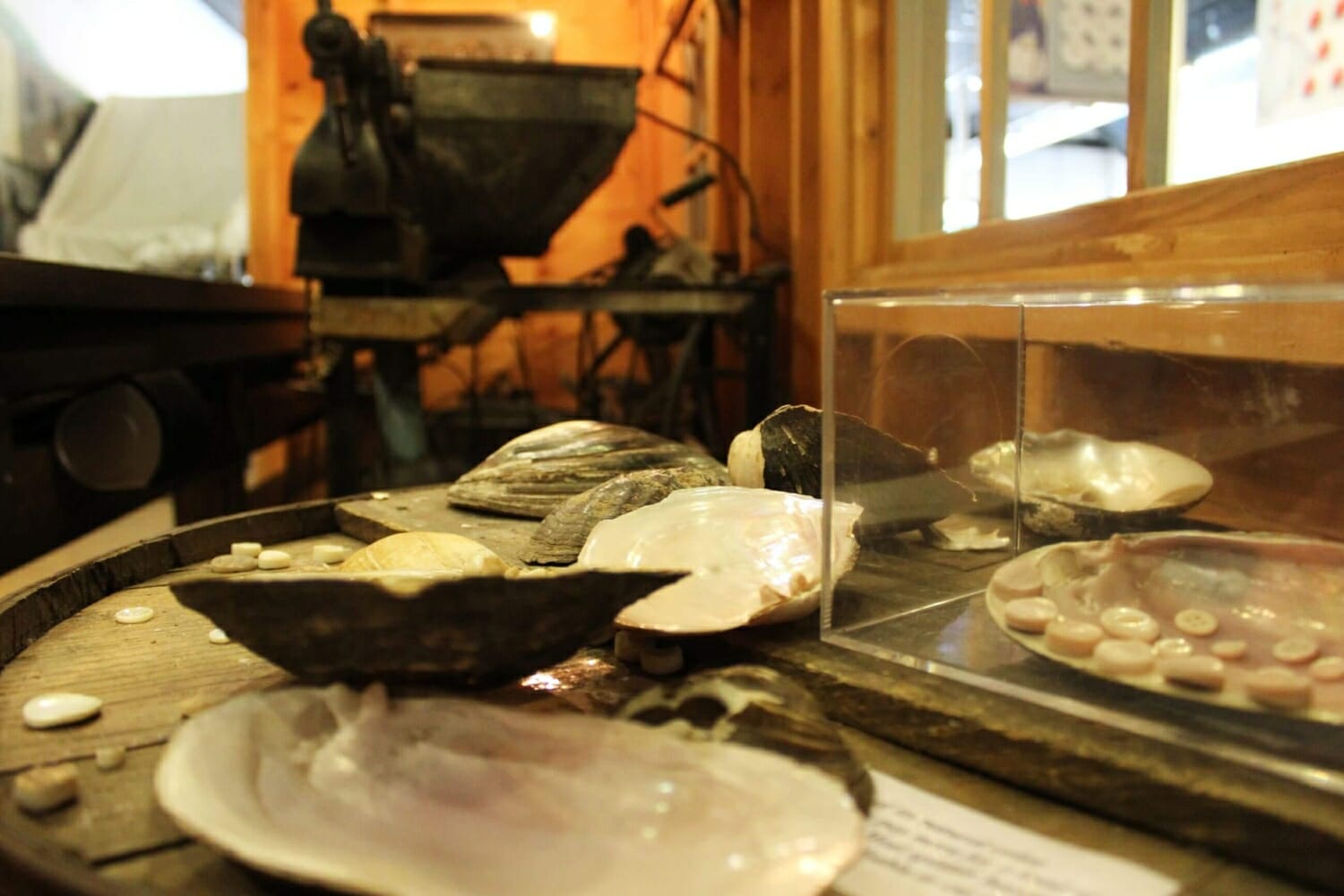 Shells and MOP Buttons at the National Pearl Button Museum in Muscatine, Iowa

A common feature of many blazers is their use of metallic buttons; most traditionally brass, but sometimes in other metals. This is largely to do with the blazers history being influenced by military attire. For more information on these types of buttons, visit our comprehensive Blazer Guide.

Weve already mentioned mother-of-pearl buttons (also known as nacre), which are punched from the inside lining of shells. Originally, they were produced on a grand scale in Iowa using freshwater mollusks from the Mississippi River, though today most of the global production comes from farms in Asia. You can tell true MOP by placing a button to your lips or cheekif its authentic MOP, the button will feel cooler. You can also tap the button against your front teeth; plastic produces a duller and lower-pitched sound than does shell. Mother-of-pearl is usually used for shirts because of its white color, which complements all but the darkest shirts. One thing you may notice when buying dress shirts with MOP buttons is that their thickness can vary more than that of a cheaper plastic button. 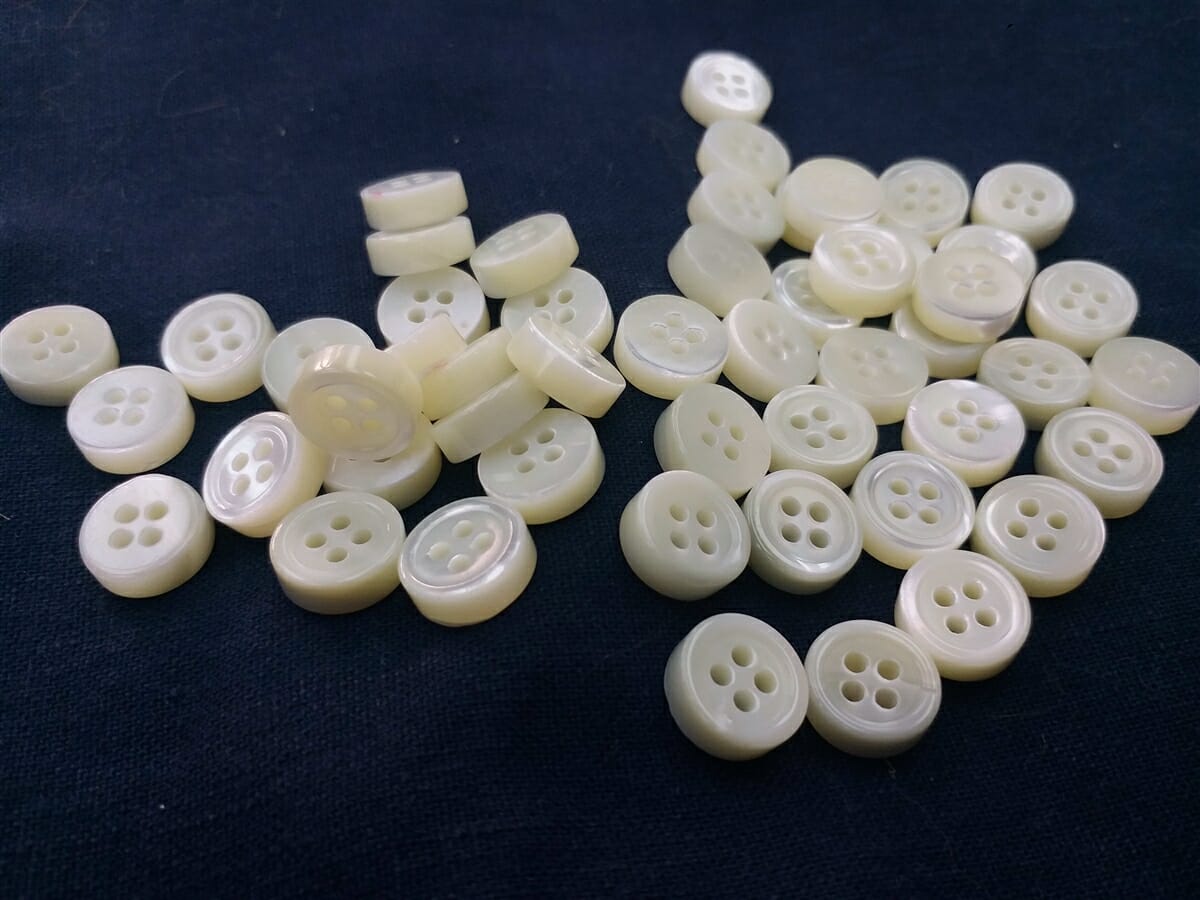 Southern Italian shirtmakers prefer to use thick buttons, probably because they think theyre more impressive; however, I personally prefer thinner ones because theyre easier to fasten and unfasten. Thick ones are more annoying to fit through shirt buttonholes. Some shirt buttons are made with trochus shells instead of MOP. These are sea snails rather than freshwater creatures, and the resulting buttons are more yellow and less iridescent, which some say brings them closer to looking like plastic. Theyre also less strong than MOP, and for these reasons, less desirable (though certainly better than plastic). 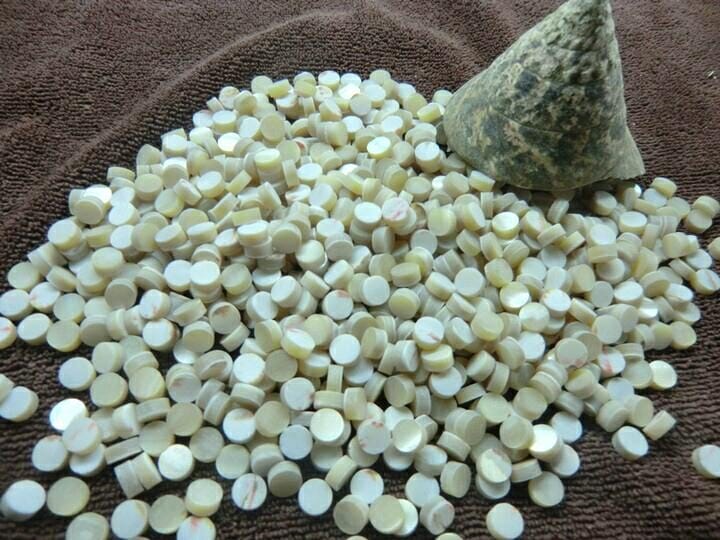 Another common button material is horn, which is used mainly for buttons on jackets and trousers. These buttons are made primarily from the horns and hooves of cows or water buffalo and are predominantly brown; however, their selling point is the variety of tones they can contain, including swirls and mottling in different colors ranging from nearly black to reddish-brown to beige. These neutrals pair well with a lot of other menswear colors, and their individual uniqueness adds to their appeal. 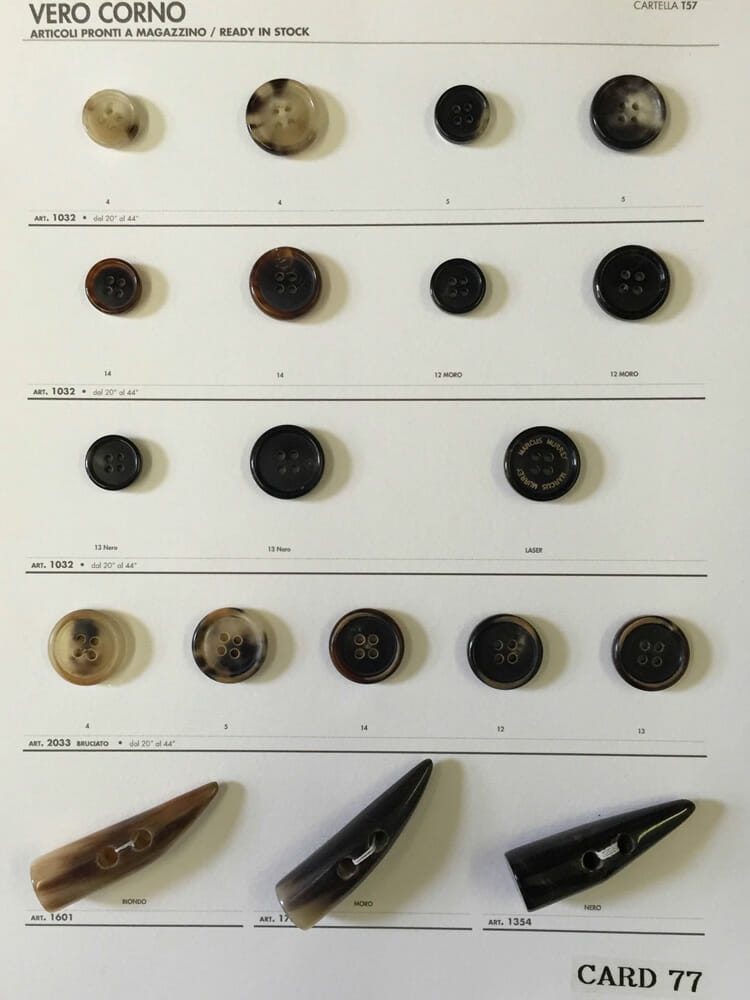 A sample of the color variety possible with horn buttons

A lesser-known choice in the button world is corozo, made from the tagua nut (in turn, from the tree known commonly as the ivory palm) native to South Americas tropical rainforests. The nuts were originally used as disposable ballast in the holds of ships during transatlantic journeys from South America to Europe during the 19th centuryuntil their ivory-like appearance was noticed, and they became desirable for carving and, eventually, for making into buttons. The interior of the tagua nut naturally has a white colorhence its moniker vegetable ivory, but corozo may be dyed to make a full range of colors.

An example of tagua nut (corozo) buttons on tailoring

If buttons hardly get any consideration from the average man, the ways in which buttons are stitched receive even less attention, except from true aficionados of menswear. The standard stitch for holding on a button is an X across the four holes; however, different stitches can add character.

The most famous of these alternate stitch styles is the zampa di gallina, or chickens foot stitch, supposedly created by the grandmother of Neapolitan shirtmaker Luigi Borelli as a method of avoiding sewing errors when she started losing her eyesight. Whether the legend is true or not, like the Milanese buttonhole, the zampa di gallina stitch has become a hallmark of quality craftsmanship, as buttons sewn on with this technique must be hand-stitched. Perhaps its slant presents an appeal similar to the asymmetrical nature of a four-in-hand tie knot, or maybe it lends a kind of energetic movement to the buttons.

Although they are common and primarily known as a functional part of clothes, buttons have an underappreciated impact on the overall appearance and style of an outfit. The simple features of buttons, like their color, number, material and stitching can add up to create the effect you want.