Ashley Pearce’s child was ready to start kindergarten last year in Maryland’s Montgomery County public school system. But when she learned the year would begin online, Pearce sent her daughter to a private Catholic school nearby. It was offering in-person classes. Now Pearce is debating whether her daughter should return to the local public school. She is unsure of moving after her daughter made friends at the Catholic school. She is also worried the school would go back online if coronavirus cases increase again. Pearce told The Associated Press, “It’s going to be fine if we stay where we are, and that stability for my family is probably the way we’re going to go.” Many school systems across the country lost students during the pandemic. And they hope when school starts again this fall, families will choose public schools. Some schools have made efforts to connect with families of young children. Some are placing signs all over communities. Others are reaching out to families with direct phone calls. There are early signs that enrollment may not recover, says a study by Chalkbeat and The Associated Press. With fewer students, public schools could receive less money to operate. But for now, money from pandemic support is keeping school budgets strong. Chris Cram is the director of communications for the Montgomery County Public School system where Pearce lives. He said the county has lost between 3,000 and 5,000 students since last year.   Drops in enrollment could also change the racial makeup of the country’s public schools. The AP/Chalkbeat study found that enrollment declines vary based on race. Enrollment in preschool to 12th grade dropped by 2.6 percent among 41 states last fall. But the decline was highest among white students, whose enrollment fell more than 4 percent. White families’ decisions seemed based mostly on whether their child’s public school offered in-person learning. States, where more students had online classes, saw larger declines among white students. The country’s Hispanic student population saw the biggest change in enrollment from before the pandemic. Enrollment dropped 1.5 percent among Hispanic students, a population that had been America’s fastest-growing student group. That could be because of the problems Hispanics faced during the pandemic. The group saw high rates of job losses and high rates of death and hospitalization from the pandemic. “As you can imagine, families (and their children) made a wide variety of decisions that were pandemic related,’ Cram said in an email to VOA. Cram said some students left Montgomery County to attend private school or home school. He said other families left for economic reasons, moving to less costly areas. “In the coming weeks we will be calling, mailing and door-knocking to engage and encourage these families to return,” Cram said. Richard Welsh is a professor at New York University who studies student enrollment. He said it could be difficult for schools to reconnect with families who left public schools for many reasons. Welsh said schools will have to find different ways to bring back students.  “ ‘We’re open for business and we’re committed to in-person learning' " could be targeted to white families. But for Black and Hispanic families, Welsh said, schools are talking about safety measures. One such effort is going on in San Antonio, Texas. There, the mostly Hispanic school district saw enrollment drop just over 5 percent. Officials there expect enrollment will rise this fall but not to pre-pandemic levels. To build trust with families worried about in-person learning, school officials have held town meetings with families. There, families can ask experts questions about the virus and COVID-19 vaccines. The school will also continue to offer fully online classes. San Antonio school officials are working to connect with every family who left or did not enroll their child in preschool or kindergarten. And Pedro Martinez, head of the school system, said they are contacting families by phone or with a home visit.   Martinez said he is centered on classes for younger students, where enrollment dropped the most. But he is also concerned about older students from poor families. Many got jobs to help their families during the pandemic. And they continued to attend online classes this spring so they could work, Martinez said. “It’s so easy for a 16- or 17-year-old to prioritize work over school,” he said. Cram said Montgomery County will also offer fully online school, in part to help working students. It is unclear exactly how many families left for private schools, like Pearce. Private school enrollment grew 5 percent or more this year in states like Delaware and New Hampshire. But in other states, including New York, Louisiana, Indiana and Colorado, private school enrollment fell by 3 percent or more. It was not just wealthy families that left public schools. There were large enrollment declines among students from both poor and rich families in the 35 states that provided data. Cram said, “some students will be coming back but not all.” I’m Dan Novak. And I'm Caty Weaver.   The Associated Press and Chalkbeat reported this story. Dan Novak adapted for VOA Learning English with additional reporting. Hai Do was the editor.   _________________________________________________________________________   Words in This Story   kindergarten — n. a school or class for very young children stability — n. the quality or state of something that is not easily changed or likely to change enrollment — n. the number of people at a school or college. makeup — n.  the way in which something is put together or arranged engage — v. to get and keep (someone's attention, interest, etc.) encourage — v. to make (someone) more determined, hopeful, or confident commit — n to say that (someone or something) will definitely do something : to make (someone or something) obligated to do something prioritize — v. to organize (things) so that the most important thing is done or dealt with first 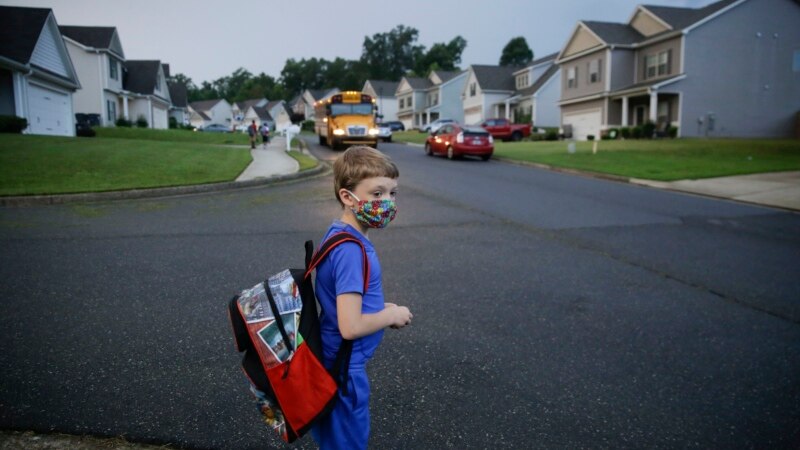