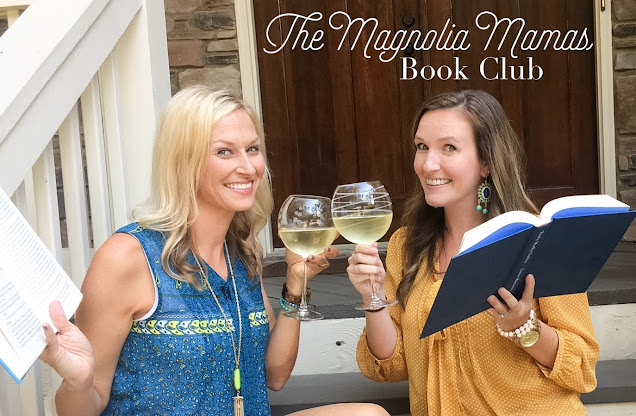 Hello August! How on earth is it already the end of Summer?! Anyone else feel like it just kind of flew by??

Well, it's official. All the Mini Magnolias are back in school.  It's a year of change for both of us because the youngest mini we sent off to kindergarten and the oldest mini started high school.

How did we even get here?

Excuse us if we skip the "book" part of this club, and just head straight for our wine and cry.

We would never skip out on Book Club. It is one of our favorite posts of the month!

I was able to squeeze in a lot of books over the summer. I really liked all of them and can't wait to share them with you today! 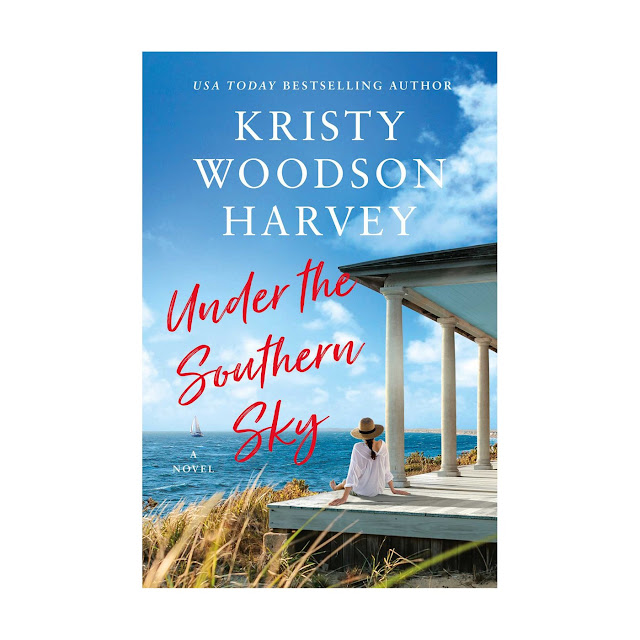 First up for me was UNDER THE SOUTHERN SKY by Kristy Woodson Harvey.  This might be my favorite title of hers so far!  I love the way she weaves southern coastal towns into her stories and this one was a love story that was years in the making.  Old friends reconnect after Amelia discovers something about her childhood friend and next door neighbor, Parker.  They are both dealing with a loss of their own and the twists this story took had me wishing and hoping for the outcome to make everyone happy again.  Definitely recommend it! 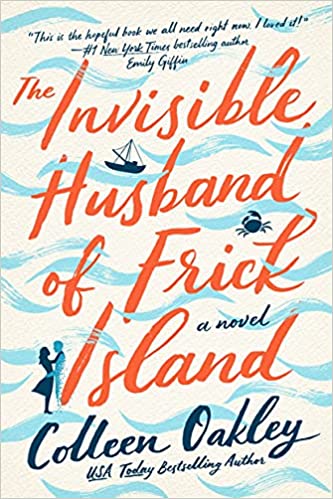 Next up was THE INVISIBLE HUSBAND OF FRICK ISLAND by Colleen Oakley.  When I started reading this I wasn't sure what to except, but it was such a different and clever plot that it sucked me right in.  The fictional Frick Island can only be reached by boat and is inhabited with a dwindling population...all of whom are stuck in their ways and live without the modern conveniences of cell phones, televisions, and WiFi.  A young widow on the island acts as if her husband is still alive and the entire town just goes along with it.  A reporter visits and ends up becoming a regular on the island so that he can produce a podcast about the quirky little island and its people.  What starts as a podcast project turns into so much more.  I really enjoyed this book and felt like it was so different than anything I had read in a while, so that was really refreshing! 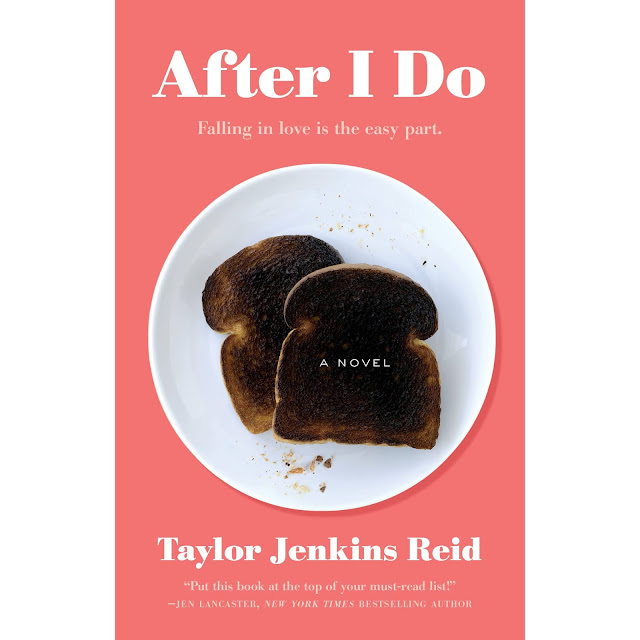 I've always loved Taylor Jenkins Reid novels and this one was no different.  AFTER I DO, was a story about a married couple who seem to have lost the love.  They are at each others throats, constantly annoyed with one another, and just in a bad place in their marriage.  They decide to take some time apart and this story follows their journey to reconnect and remember why they first fell in love with one another.  I think any married couple goes through ups and downs and this book put an honest spin on how that life can look. I loved the way it ended and would definitely recommend this one! 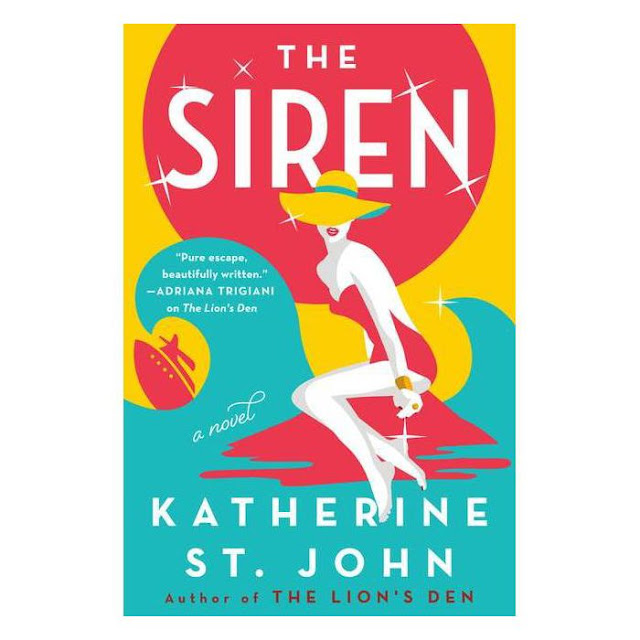 Last up this month was THE SIREN by Katherine St. John.  Jen suggested this book to me and told me it was full of Hollywood secrets and scandal.  She was right! It's set in the Caribbean for a new movie that is being shot and I loved getting to get a peek behind the scenes of what a movie set and production would be like.  It follows several different characters and their stories (the producer, an actress, and her assistant), but ends up bringing them all together for a thriller/mystery type of story towards the end. It was a really fun read!

My "to read" pile is officially taking over my night stand! I tried my best this month to read physical books, and not listen to as many. There was no rhyme or reason to what I would grab. Mostly, I would look at the cover and see if it looked summer-ish. :) While most of these covers look like light and fun, some of these reads have a little more depth and a little less beach to them... 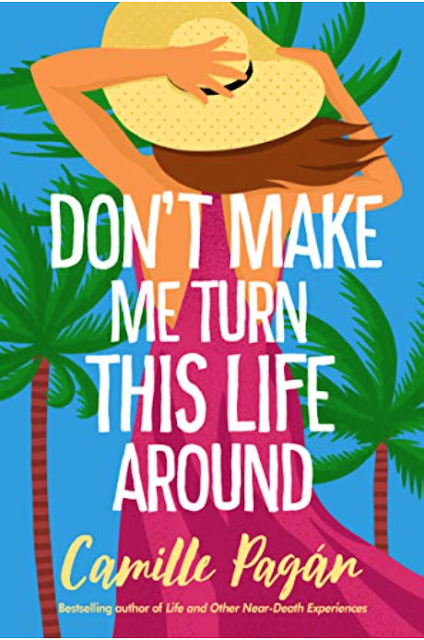 Camille Pagan knows how to tug at my heart strings while simultaneously making me laugh out loud. I discovered her novels a few years ago, and was so excited a new one came out. DON'T MAKE ME TURN THIS LIFE AROUND is the follow up novel to Libby’s story from LIFE AND OTHER NEAR DEATH EXPERIENCES.This can be read as a standalone, but LAONDE is the novel that hooked me onto Pagan, so I’d say read it if you haven’t!In this book we fast forward around 15 years in Libby’s life. And while she’s living her life cancer free and has everything she could ever want, something is off. She plans a trip back to Puerto Rico to recapture her magic, but one disaster after another and Libby begins to wonder if she’s not really meant to have it all.I loved this story and while I teared up at multiple parts, and there were several times I was annoyed by Libby in this one, I understood why her story needed to play out the way it did. The ending requires a tissue alert, and even though I didn’t get the closure in one character’s story that I wanted (book three??), I’m so glad I added this one to my poolside reading this Summer.And now to also book a trip to Puerto Rico. :) 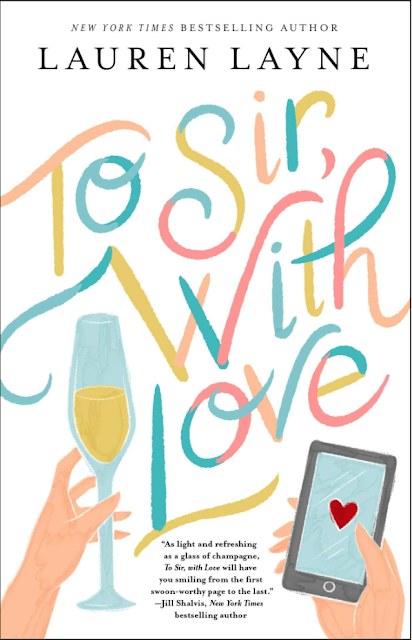 TO SIR, WITH LOVE might be the most adorable book I've read this year. This is a slow burn romance between two of the most lovable characters. Gracie Cooper is fulfilling her parents legacy by running their family champagne shop located off Central Park in NYC. Things are going well, but not great. Ever the one to believe in fairy tales, Gracie turns to "Sir", and accidental online dating app love interest for comfort. Only problem...they haven't met in real life yet.
The champagne shop's prime real estate brings nemesis/real estate mogul Sebastian Andrews to her doorstep. He's the character you want to dislike, but just can't bring yourself to do it. And neither can Gracie.
This story had me laughing out loud several times. The banter between all the main and secondary characters is excellent. This easy breezy romance did my soul some good, and I already look forward to seeing what else Lauren Layne does for her next novel because now I am a huge fan! 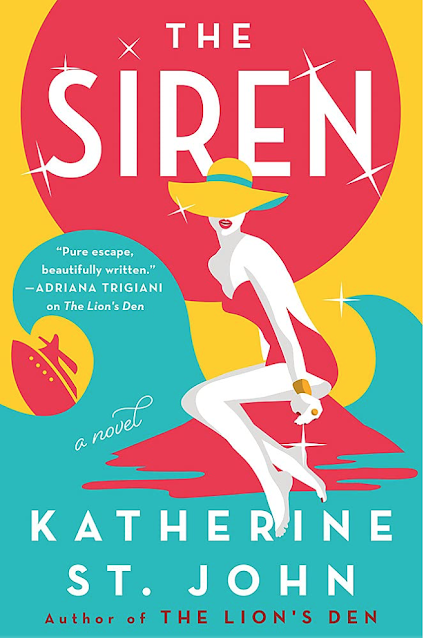 Oh my, if you are looking for a novel packed with Hollywood drama, exotic locations, interesting characters, and mystery - then THE SIREN has got you covered. I described this one as "juicy" to Carrie Beth, and told her to read it for a little something fun to throw in the mix.
Three women land on a private Caribbean island for the filming of a mega-anticipated movie. Little does anyone know, all three women have their own agendas and their own secrets they are hiding from the rest.
The story is told through their perspectives and with each page turn there is a new surprise. Love interests pop up. More secrets become unveiled. Murder. Mayhem. Lies. And even a hurricane. This book had a little bit of everything and I. could. not. stop. reading. 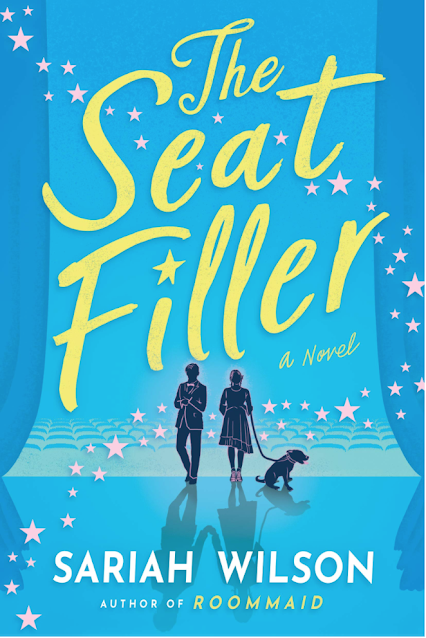 THE SEAT FILLER wrapped up my reading for the month. This is a fun "meet-cute" with charming banter between all the main characters.
A hollywood awards event turns into rom-com fun as one of the world's best actors stumbles upon a seat filler sitting in his date's seat during a break. There's more than meets the eye about either, and soon the pair begin running into each other off stage. But there's one problem - one doesn't date. Or at least is scared to, due to a rare phobia.
From there the story is a little bit predictable and a whole lot "cute". If you are looking for a light romance to read that is a little more on the G rated side - snag this fun, quick to read novel.

It's no secret that I'm a Twilight fan. I shared about my obsession with MIDNIGHT SUN earlier this year (see my review HERE) and when I saw LIFE AND DEATH - TWILIGHT REIMAGINED by Stephanie Meyer I quickly added it to my must-read list. 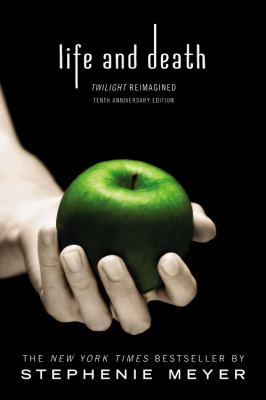 Yes, Twilight has been overdone and I really don't see how many more ways it could be spun, but I'm here for it and willing to give it a try! I'll report back next month. :-)

I'm going to do a little something different to kick off next month. I've share about Once Upon a Book Club before (and will again soon), but I ordered the Bridgerton Box and now that the kids are in school, can't wait to dig in! 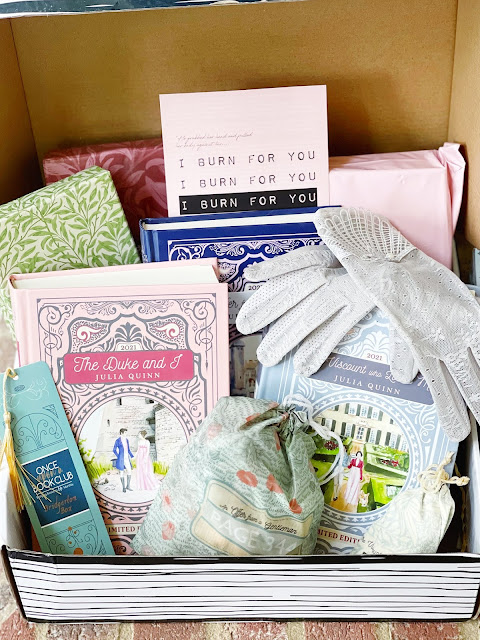 Like most Netflix subscribers, I loved the show! I have never read any of Julia Quinn's popular series, so I am looking forward to having a little reading fun with it before the second season comes out.

(Psst!!! Don't forget anything that you want to purchase on Once Upon a Book Club, you can use code MAGNOLIA10 to save 10% off! They have some great mini-sets available that would make for great gifts if you have a big reader in your life!)

Anything fun you've been reading lately that we need to put on our lists?

| January | February | March | April | May | June |
BEST BOOKS OF SUMMER 2021
Follow along with us on Goodreads!
HAPPY READING!