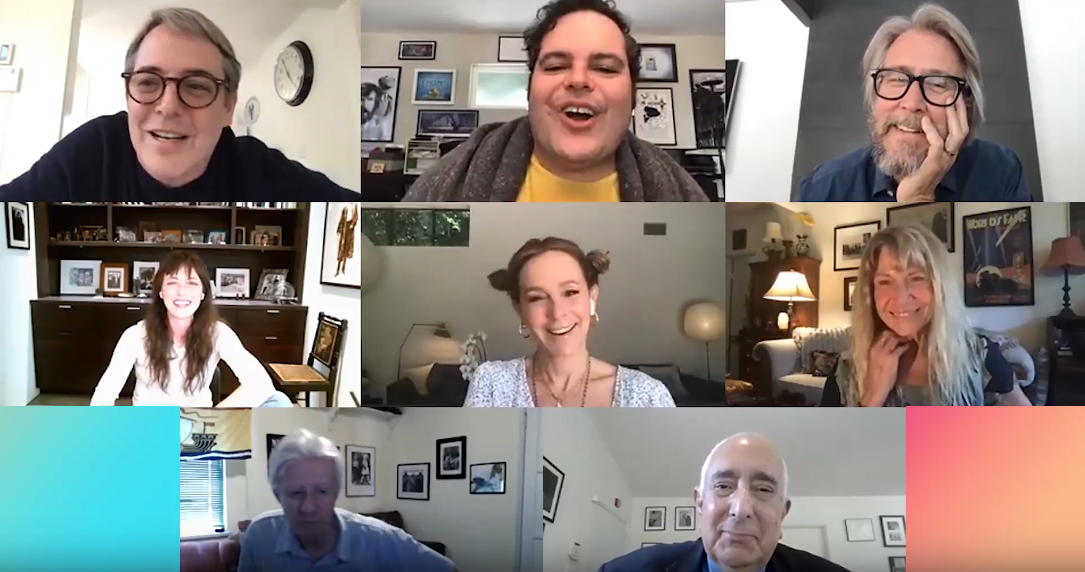 Josh Gad‘s web series Reunited Apart has allowed fans to pass some of their quarantine time by watching the cast and filmmakers behind their favorite movies reunite virtually online. The Goonies, Back to the Future, Splash, Lord of the Rings, and Ghostbusters have all been featured on the series. Now another beloved movie from the 1980s is taking the spotlight.

Ferris Bueller’s Day Off is one of the many classic teen comedies directed by the late John Hughes, and Josh Gad was able to round up Matthew Broderick, Alan Ruck, Mia Sara, and more.

The chemistry between Matthew Broderick and Alan Ruck as Ferris and Cameron is big part of Ferris Bueller’s Day Off works so well. That friendship is a result of having been friends and co-stars together for a little while before the movie, thanks to the two working on a stage production of Neil Simon’s Biloxi Blues. However, as the two recalled, a bad wardrobe test with the cast had John Hughes thinking that maybe things wouldn’t go very smoothly on set. But as we all know, everything turned out all right.

As a longtime fan of Ferris Bueller’s Day Off who has seen the movie countless times (my family had a recording of the movie from The Movie Channel that I watched over and over again as a kid), there’s not much that I don’t know about the movie. But one new detail came from Matthew Broderick, who revealed that be blew out his knee during production, and he was still recovering from the injury while shooting the famous parade sequence.

Jennifer Grey, who played Ferris Bueller’s sister Jeanie, told a story about how she created a little mischief during that parade sequence by donning a disguise and pretending to be an autograph hound, getting pictures with all the cast that was on set that day and trying to get into the movie. Apparently John Hughes was fooled, because he attempted to have security keep her away from filming.

Ferris Bueller’s parents, Lyman Ward and Cindy Pickett join in, and they mention the little trivia about the Bueller family having a couple more siblings that we never get to see. But there are remnants of their existence in the movie by way of some kindergarten-age drawings on the fridge and a family portrait in Ferris’ father’s office.

Josh Gad even got Ben Stein, the economics teacher who famously takes attendance in the most boring way possible, to come in for the reunion. Stein has become famous for his unique speaking style and cadence, and it’s all thanks to his part in Ferris Bueller’s Day Off,  a role was supposed to only be an off-camera voiceover role but expanded to much more thanks to an improvised scene.

As usual, the line-reading part of Reunited Apart is the most awkward part, mostly because they’re not the best readings, though there are some bright spots from Jennifer Grey and Ben Stein during this portion that stand out. But it’s followed by a little trivia section with special guest Jake Gyllenhaal asking questions to the cast.

Finally, make sure you stick around for the very end of the video, because it’s a montage of cast members from various John Hughes movies over the years reading some of their most famous lines. We won’t spoil who appears in the incredible line-up, because it’s kind of an amazing line-up, but fans of National Lampoon’s Vacation franchise, Uncle Buck, The Breakfast Club, Sixteen Candles, Pretty in Pink, Curly Sue, Mr. Mom, and Planes, Trains and Automobiles, will not be disappointed.

Also, in case you didn’t hear, this will be the last episode of Reunited Apart for a little while. Josh Gad posted on Twitter:

A lot of you have been reaching out to me to tell me how much #ReunitedApart has meant to you & how sad u are to see it end. I promise it is only for now. The #FerrisBueller ep airing this Sunday at 9:00 AM PT /12 PM EST is a perfect way to say goodbye. And 1 day, we will return! pic.twitter.com/WznZ2YkCw6

People ask me what it will take 4 me 2 do more #ReunitedApart – The truth is I only want to do it if it is raising lots of $ for those who need it so desperately right now. I hope people will consider donating 2 all of our charities and keep the numbers going up on @coregives ? pic.twitter.com/DjE37M3ZLB

That’s all from Reunited Apart for now, but hopefully Josh Gad will be back with more reunions in the future.

The post ‘Ferris Bueller’s Day Off’ Cast Gets Back Together for ‘Reunited Apart’, and the End is a John Hughes Bonanza appeared first on /Film.