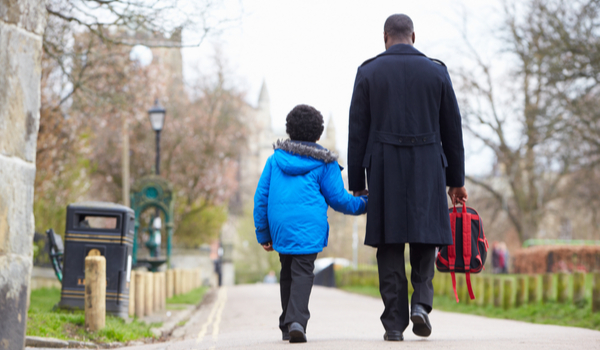 I was born in Chicago, and I’ve spent most of my life there. I’m writing these words there. But if there’s anything that ever makes me want to pack up and leave my hometown, it’s the weather.

I’m sick of the cold. The snow. The ice. All of it. At this point in my life, I want to live where people have no concept of “wind chill.” I want monotonously good weather. I want to go where I keep a jacket in the car just in case the temperature drops below 60 degrees. I want to visit the snow the same way I visit the sun now.

For lots of reasons, my family isn’t ready to move. Some days, though, I feel irrational enough to tell my wife that we should chuck it all and run, that we’ll figure out the details later. When we’re both grumbling about Chicago living at the same time, I think I could almost convince her.

I know what you’re thinking: “Isn’t keeping your child in the same school a pretty low bar?” And I don’t disagree.

But I know we can’t. Not yet, at least. My fifth-grade son has attended the same school since kindergarten, something I consider to be one of my greatest accomplishments as a parent — and I’m not about to end it.

I know what you’re thinking: Isn’t keeping your child in the same school a pretty low bar? And I don’t disagree. But I know the value of the stability I’ve given my son, the certainty he knows, and I know it’s a gift.

Because when I was a kid, I went to 11 grade schools. Eleven.

I’m the oldest of six children. My mother, a single parent, had a hard time settling down and often a harder time making the rent. So we moved around a lot, especially during the first decade of my life.

It’s always tough being the new kid in school. On average, I was that kid almost every single year. I don’t remember how many schools I attended. Perhaps it wasn’t 11 — maybe it was nine, or 12. But it was a lot for me to process as an adolescent; those are formative years, and uprooting your life multiple times doesn’t exactly aid development.

My grade school transcript read something like this: I briefly attended one school where the students threw C-cell batteries at a substitute teacher. Then I went to one that had a swimming pool! I went to a Catholic school for part of a year. Even though I wasn’t Catholic, I loved it because the family was required to attend Mass just once a month — for only 60 minutes, instead of the hours-long services of our Evangelical church.

At one school — this one in a small town — a kid my age ended his own life, and everyone pretended that it didn’t happened. (There wasn’t a lot of grief counseling in the 1980s.) At another, I took an ancient folding penknife to class. I’d found it tucked in the corner of our dated apartment, and wanted to scare off some kids who bullied me. A teacher took it from me and threw it in a drawer with the confiscated comic books and whoopee cushions, and that was about it. I went to several schools where teachers spent their own money to buy good coats and boots for students who were going without.

Not surprisingly, all those schools led to insecurities about not fitting in. I rarely got to stay in one place long enough to participate in after-school activities or sports. In a time when people are making lifelong friends, I learned not to get attached to anyone. I never let anyone become too important to me because I didn’t know when I might come home to a moving truck — or, more likely, a car stuffed with black garbage bags. There was rarely time to say goodbye and no Facebook or email to keep in touch.

Just: Now you see me, and now you don’t.

Even now, decades later, I have trouble maintaining relationships. My friends do way more than their share of the heavy lifting when it comes to keeping up with me. And it makes me feel guilty. I sometimes say, “If only I reached out to you as much as I thought about you.” But I never do.

My son’s life, though? His childhood couldn’t be more different from my own. He’s moved from grade to grade with mostly the same classmates and the same friends. I know their names and even some of their parents. He played an entire season of football with the same team, and his mom and dad never missed a game. At his age, I loved football but never even tried to play organized sports because I knew I couldn’t reliably get to practice. He gets shuttled to playdates with classmates. If we move, we do it in the daytime.

Take the most mundane thing imaginable: report card pickup day. On that day, he knows we’ll pick up his report card. Simple, right? Except it’s not. I had many a report card sent home weeks after the mandatory pickup date. Whether my mom could show up for any given parent-teacher night was a crapshoot.

That’s not to blame her or to praise myself. My son is an only child with two active parents; I was one of six kids, with only a single mother who had to do it all. Maybe that’s why partly why I get such satisfaction out of doing it: I can be there for my son in every way he needs me.

In a few years, my son will graduate from eighth grade. He and his classmates will exchange phone numbers, email addresses, and Instagram accounts (sigh) and promise to keep in touch before they head off to any of a half-dozen high schools in the area.

Such should be the natural order of things. And I won’t let this damn weather take that away from my son.

This post was previously published on LEVEL and is republished here with permission from the author.
—

The post I Went to 11 Schools as a Kid. My Son Shouldn’t Have To. appeared first on The Good Men Project.