When he was 5 years old, Carson Steele liked racing go-karts and playing outside, but he wasn't into sports.

However, Steele said he was naturally a bigger kid. His father encouraged him to play football, and his parents signed him up for flag football when he was in kindergarten.

"I really wasn't into sports - I was into doing outdoorsy stuff," Steele said. "I was always a big kid, and my dad asked me to try out."

When he first started playing youth football, Steele was too big and needed to meet the 115-pound weight limit to carry the ball, so he had to play offensive line and linebacker.

But, in second grade, Steele met the weight limit and could even move up and play with the third-graders. He then was able to carry the ball, and that is when he fell in love with the game.

"I didn't like it that much [at first]," Steele said. "I got to move up and play with the older guys, and I got to run the ball. That is when everything started to fall into place, and I kind of took a love for the sport."

Steele's mother, Angela Steele, said she and Carson would work out together, run drills and toss a football around before he would catch the bus to go to school in the mornings. She said football was something they would talk about at the dinner table and is what they "eat, breathe and live."

Steele went on to play for Center Grove High School in Greenwood, Indiana, which is when his football career started taking off. In 2020 - his senior year - Steele led the Trojans to a 14-0 season, helped Center Grove win the class 6A state title and was recognized as Indiana's "Mr. Football" by the Indianapolis Star.

In his first game, the Trojans were playing Warren Central High School. Steele was put in to start the second half and immediately ran for a 90-yard touchdown.

"It was like the most magical moment," Angela Steele said. "I remember bursting into tears and just being so happy for him. We didn't win the game, but it felt like we did."

Steele said his hard work comes from his family and the bond they have together, and the support he has received from his parents and sister has gone a long way in helping him succeed.

"My family [are my mentors]," Steele said. "They all took a role in football. My dad would help me work out, and my mom is a beast. She would run with me and work out with me as well. She does the same stuff that I do and is in great shape as well. My sister has been there to support me - she doesn't really do sports, but she was there every Friday."

Steele also credits his high school teammates for helping him succeed. He said he grew up with a lot of them, which made winning a title even more special .

"I am just thankful," Steele said. "I go out there and try to work hard every single day. Being able to go out there and win that state championship was an amazing feeling to me. I couldn't have done it without my team. The cool thing is, I grew up with a lot of these people, so being able to succeed with them was so cool."

With his success in high school, though, came adversity. During his junior year, he had a "freak accident" when he was throwing a football around with his father in his living room. He pulled his hamstring and only played in three games that season.

Steele finally got healthy for his senior season, but then the COVID-19 pandemic hit, which he said caused a lot of uncertainty about his future and the recruiting process. But one program stuck with him through everything, and it was Ball State.

In addition to Ball State, Steele also received offers from Indiana State, Illinois State, Southern Illinois and Western Illinois. He even got offered a preferred walk-on spot from Purdue. Angela Steele said while he didn't get a lot of offers, Ball State was the first to reach out and never left.

"We felt like we knew them," Angela Steele said. "No other school did that. Nobody else was Zoom-calling us and checking to see how we were. We never saw Ball State's campus or met the coach in person until I dropped him off at school. I just felt so comfortable because of how loyal they were to us. He wanted to go somewhere where he felt appreciated."

Steele said Ball State felt like home right away, despite not being able to visit until he moved in this past July.

"I saw Center Grove inside of Ball State," Steele said. "Coach Neu is a great coach. He is hard on you but still wants to see you succeed. That is how my coach at Center Grove was, a coach and a father figure."

Ball State head coach Mike Neu said there are more positives than negatives when the ball is in the freshman running back's hands and told him that if he practices how he plays, he will get more touches. He also said he loves the physical traits he brings to the table, which help him grind out extra yards.

"He's got great size," Neu said. "He's got good speed - he has all those things. When we were able to get him to commit to the Cardinals and we were able to get him here on campus, his work ethic is what stood out. His strength stood out. He put it out there on the practice field each and every day. He's going to get the ball more and more because he's earned those reps."

Ball State offensive coordinator Kevin Lynch said Steele's work ethic is what caught his attention. He said he practices like he plays and gives the same intensity in practice that he does in games.

"He's a great kid," Lynch said. "When he came here, he had it physically, and he was ready to go talent-wise. Sometimes, the challenge for freshmen is getting caught up to the speed of the game. He has been a guy that has really attacked that hard and has caught on really strong."

While Steele is only a freshman, he has scored three touchdowns in four games and is trying to make the most out of his touches.

"He is not one of those guys who says a whole lot," Neu said. "He is a freshman still trying to find his way - he does all of his talking with his work ethic. He is just working hard -  he is super early to meetings, sitting in the front of the class and a lot of things have been so positive." 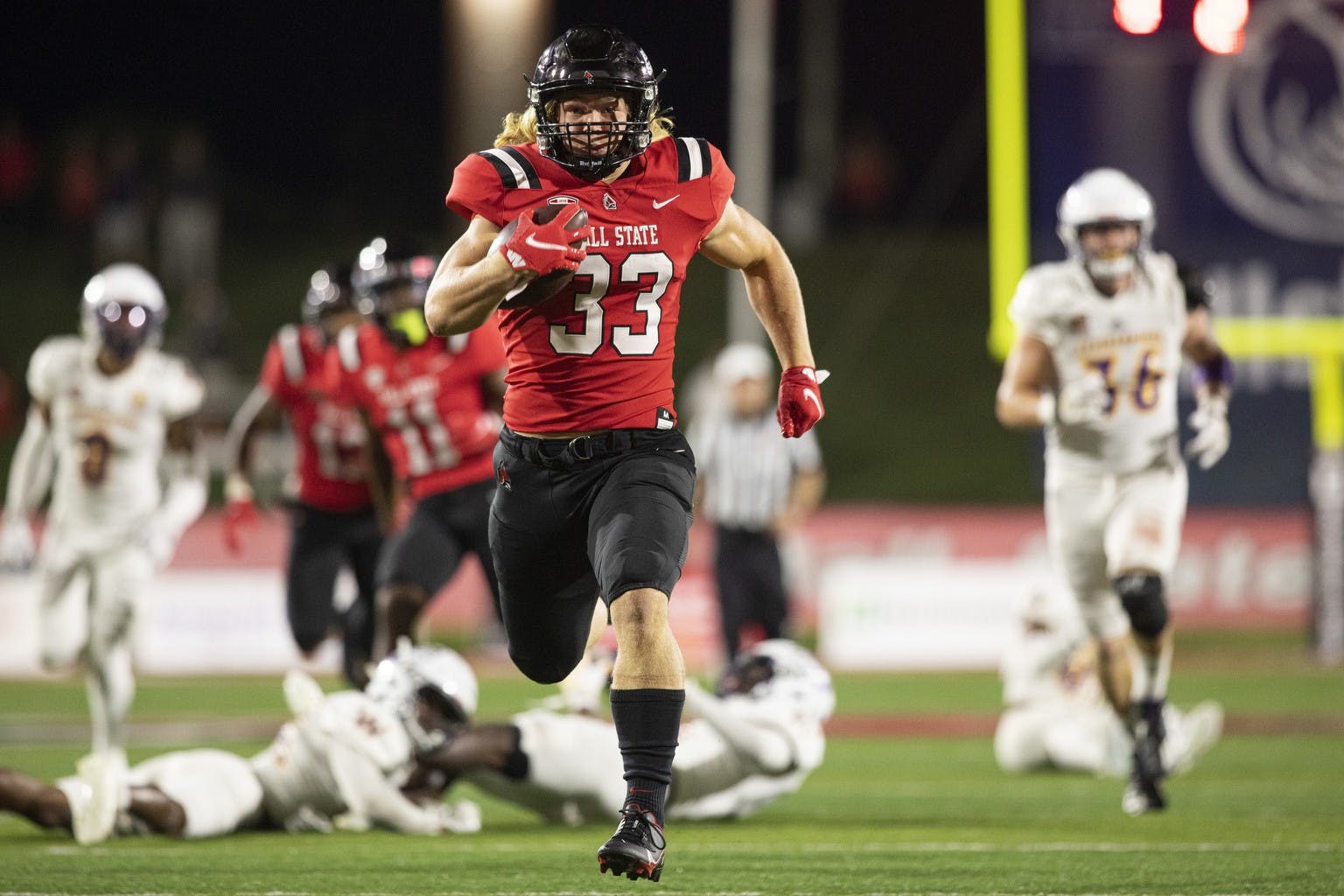