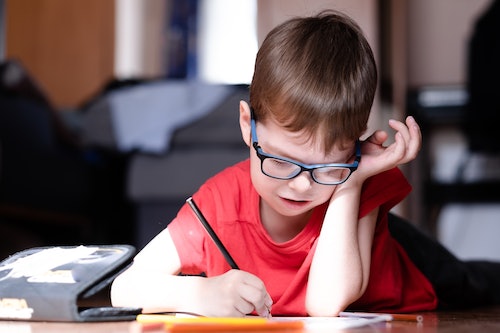 Jess’s decision to “redshirt” her youngest children — let them stay in preschool for another year and delay their entry into kindergarten — did not come easily. She had all four of her children (ages 8, 7, and twin 4-year-olds) in the span of three-and-a-half years, and wanted to keep her twins just two years behind her second oldest child. She liked the idea of keeping them together as a crew of some kind, protecting each other and sticking together. “From the beginning, I didn’t want to hold them back,” she says.

Jess’s stance changed when she went to a first grade parent-teacher conference for her 7-year-old. “Because he’s a year behind my first, he was doing everything my first would do. He was reading when he started kindergarten. He could color in the lines when he was three. Then, the teacher told me he was average. I’m pretty sure my jaw hit the floor. I was like, ‘Are you kidding me? The child can read! He’s average!?’”

She looked at her twins — born premature and small for their age — and saw two lovable 4-year-olds (who would turn 5 in May, just making the cut-off for kindergarten entry) who could barely write their name and couldn’t color inside the lines. How could they sit, for eight hours a day, in a classroom and stay on task? She didn’t want them to struggle. So, she decided to have them repeat pre-school.

“Redshirting,” as it’s known, is most often discussed in the context of college sports. “Redshirted” freshman can participate in practices, but don’t get on the field to play until their Sophomore year, This gives these young athletes an extra year of preparation to ensure they’re as ready for the field as possible. That this practice trickled down to 5-year-olds speaks to the pressures of early education and what parents do to give their kids a fair shot.

Redshirting has become a solution to this growing concern. But there’s the question of whether or not it does, in fact, help children as well as the issue that it’s only a solution available to those who can afford it in the first place.

As Elia, a mom of six from Pennsylvania who recently decided to hold back her youngest, put it, “Kindergarten is the new first grade.” The rise of redshirting has coincided with what parents and experts refer to as the “academization of kindergarten.” No longer a place for unstructured play and nap time, many kindergartens have shifted into a real classroom, where kids are expected to learn cursive and already know how to read. That leaves parents whose children just make that age cut-off face the decision of sending them into a tougher, more academically kindergarten.

Developmentally, the difference between a child who just turned 5 and one who turned 5 a year ago is massive. The near-6-year-old has 20% more life experience than the just-turned-5-year-old. They can functionally be two different types of children. Parents see that and, understandably, wonder if they can hold their child back until they’re “ready” — ready to learn cursive, ready to count numbers, ready to write their name over and over. Older kids perform better on tests, are more likely to stay on task, and have higher test scores for quite some time than younger kids.

Elia, who has six children, the oldest of whom is 13 and the youngest two-years-old, had to make a hard choice. She sent her fourth child to a private kindergarten which, she says, “was a disaster.”

“They were doing poems, everything was in cursive. It sounds cute — but he wasn’t getting anything out of it,” she says. Her son, she felt, was too young, struggled to stay focused, and fell behind the other kids. It was hard for Elia to watch. She realized that she didn’t want to make the same mistake with her next. So, she un-enrolled her second-youngest from preschool for a year to give him, in her words, another year to “just be a kid.”

Both Jess and Elia’s stories speak to a common reality for parents of young children. How do you prepare your child for kindergarten if what happens at kindergarten varies widely from school to school?

“Parents and policy makers should think about how we’re creating alignment from pre-kindergarten and early childhood experiences, all the way into grade school,” says Thomas Dee, Ph.D., a professor of Education and Senior Fellow at the Stanford Institute for Economic Policy Research, who has studied the effects of redshirting on kids. “I think we tend to focus on some of these questions in isolation, and miss the opportunity to think more holistically about creating thoughtfully aligned pathways.”

Early childhood education experiences vary widely across the country. There are different levels of education, care, and priorities. This, combined with the increased rigor of kindergarten, creates a quagmire for parents who are trying to figure out how to provide the best educational and developmentally appropriate experience for their child.

“We found that for kids who were on the backside of the [age cut-off to enter kindergarten] and delayed schooling had substantially lower levels of ratings on inattention and hyperactivity at age seven, and even at age 11,” he says. The results, which show a 73% decrease in inattention and hyperactivity, suggest that not only are benefits to holding younger children back a year legitimate, but that they are also long-lasting.

Other research into redshirting isn’t as convincing. A study by Francis L. Huang, a professor at the University of Missouri College of Education who studies education policy through qualitative analysis, shows that redshirted students had a higher prevalence of being enrolled in special education programs, having behavioral problems, lower earnings as adults, and higher dropout rates.

This data, however, might say more about the types of children who are redshirted and the reasons they might be redshirted — they can’t sit still, they’re not socially or emotionally developed — than the outcomes that come along with it.

“At the start, the older kids had an advantage,” says Huang. “They scored better academically. But over time, that advantage equalized and dissipated,” he says. The reason for this is complicated: for one, the difference between someone who turned 18 yesterday and someone who is still just 17 is far narrower than it is at younger ages. It also points to the difficulty of capturing narrowly defined data over the course of a child’s educational lifetime when they are being taught alongside other children as well as the thornier issues of redshirting, such as what it does to teachers, and other students, in the classroom.

“Let’s say you have two kids in a kindergarten class — one kid knows all his letters and the other knows five of the letters,” says Huang. “The teacher is going to focus on the kid who needs more help. That’s why, if you might have had an [academic] advantage at the start, you likely will even out over time.”

Combine this with the fact that in some states, kindergarten teachers have a combination of students who are older than 6 as well as those who just turned 5, and there’s a real difference in what these sets of children can do academically.

“For a teacher to deal with a gap of 11 months is big,” says Huang. “For a young grade, that’s 20% of their life. That makes a big difference. But it makes it harder for the teachers.”

Much of the data on redshirting is done a state-by-state, or even district-by-district, level. But there are estimates that redshirted kids make up between 3.5% and 5.5% of kids being held back in any calendar school year nationally. In some districts and states, it’s much higher. One study that focused on Wisconsin showed that the redshirting rate was seven percent; a study of three school districts in Southern California showed that 10% to 11% of kids were held back in any given year.

Redshirting rates tend to be higher in affluent schools and school districts — which makes sense given that to hold kids back often requires parents to shell out for another year of preschool tuition, which might cost as much as tuition at a four-year-public college. While the vast majority of redshirted kids are born in summer months — again, this makes sense, given that many states have their entrance cut-offs at September 1st — being redshirted is twice as common as boys than it is girls, and far more common among white kids, who are redshirted at double the rate of Asian students and more than double the rate of black and Hispanic children. According to the Brookings Institute, redshirting is twice as prevalent in schools that serve rich children as it is those that largely serve children of the middle or working class

This makes the practice of redshirting profoundly unequal and, ultimately something that can only be accessible by those with a certain amount of wealth. Policymakers have responded by making redshirting more difficult. New York City, for example, made redshirting illegal, unless parents have a very strong case to do so. Chicago lawmaker Representative Kam Buckner also put forth a bill arguing that the practice of redshirting furthered inequality in public schools and widened the achievement gap between black and white students.

“There are two things I would stress: The age of entering school has been rising over time. But also, kindergarten has been changing, at least in the United States, over recent years,” says Dee. This coupled with the fact that kindergarten is difficult and pre-kindergartens across the same city provide wildly different experiences, emotionally, socially and educationally for kids, and many parents feel unprepared to send their kids off to new waters.

If there were true alignment — or meaningful access to high quality pre-kindergarten programs, which is certainly not guaranteed — perhaps the rate of children entering kindergarten later would lower. The Department of Education could also raise the age of kindergarten enrollment another year to give kids more time to grow in play-based environments and develop socially and emotionally.

Either would, however, have the added effect of requiring urban parents to figure out expensive pre-k or child care arrangements. It makes financial sense to have kids in public schools earlier. But making the practice of redshirting illegal seems to have had the unintended effect of making it even more of a provenance of the rich and wealthy. It’s clear that treating the problem in isolation seems to ignore the reasons why parents like Jess and Elia feel like they have to be singular advocates for their children.

Of course, a universal pre-k program is, while not impossible, not going to happen tomorrow. Access and affordability in the existing system are another question altogether. In the meantime, parents who can’t afford to hold their kids back, even when they’re concerned put their kids into kindergarten classrooms. The lucky ones can afford to stay out of work for another year or throw another $12,000 to $25,000 at the problem to give their kids an edge, and another year to be a kid. Teachers, on the other hand, get children from all different child care and pre-k backgrounds, even when they’re the same age, but also if they’re not.

Some parents — like Elia, who has a 13-year-old, an 11-year old, a 9-year old, and a 7-year-old before her two youngest — feel pretty good about the choice they made.

“I see my kids get home at 4:30, and I see how exhausted they are. My middle schooler goes to school at 7 a.m. Even my first grader is exhausted. I just feel like we’re creating this rat race for them,” she says. “They’re not taking time to just enjoy life. They’re going to end up working so hard for 13 years in school and then go to college. So, will I regret holding him back? Out of all the decisions I’ve made, I feel very secure in this one.”

Where will the CDC monitor wastewater for polio?
December 01, 2022