Staying home whenever possible and limiting up-close interactions with people who don’t live with you is, unquestionably, the correct thing to do in order to slow the spread of COVID-19. That doesn’t mean everyone is doing it. People are still having parties, going to protests, and attending whatever public events haven’t been canceled, even at risk of getting arrested—and it’s fair to assume some of those people’s friends  raised some questions, or at the very least some eyebrows.

It can be difficult, however, to hear a friend criticize your life choices during an already high-stress time. People may become defensive. In recent weeks, many people have been losing friends, questioning their friends’ morals, or finding their friendships strained because friends are taking social distancing less seriously than they are. And because of the high stakes of this moment of history, the rifts created now may not be so easily mended.

Joey Amaya, 22, watched in mild disbelief a few weeks ago as a friend of his texted a group chat of about 10 people to invite everyone to play soccer. Virginia, where they live, had been under an official stay-at-home order for almost two weeks, Amaya’s grandmother was hospitalized at the time with COVID-19, and his friend wanted to get a big group together to play a contact sport? “I didn’t feel comfortable with that,” Amaya told me. On the group thread, Amaya reminded his friend of the risks; he mentioned his grandmother, and dropped a recent statistic about the nationwide death toll from COVID-19.

“He responded with ‘I didn’t ask for a lecture. You could have just said no,’” Amaya said. When I interviewed Amaya, four days had passed and his friend hadn’t spoken to him again; he found out later via Snapchat that his friends had gone out to play soccer without him.

Miriam Kirmayer, a clinical psychologist and friendship researcher based in Montreal, has heard many similar stories from her clients lately. It’s common for people to perceive input or feedback from their friends as criticism, she told me—and to take that perceived criticism as a personal insult, even if it’s not meant as one. “We tend to see it as criticism not just that we’re doing something wrong, but that we’re inherently bad,” Kirmayer told me. Plus, in this situation, the subtext of You’re doing this wrong is coupled with the heavy accusation that you’re endangering people’s lives—which, well, you could be. (Do a little digging on Twitter, and you can find first-person accounts of what it’s like to hear from a friend or relative that you haven’t taken social distancing seriously enough.)

[Read: Two errors our minds make when trying to grasp the pandemic]

Katie Stanley, a 17-year-old high-school senior who lives in Indiana, had already lost a number of her teenage milestones to COVID-19 before it started interfering with friendships she’s had since kindergarten. Prom had been canceled, then school was closed; now she’s not even sure whether she’ll get to start her freshman year in person at Butler University this fall. Instead of enjoying the end of her senior year, Stanley is staying home and watching her friend group unravel from afar.

In her group of eight close girlfriends, Stanley told me, only she and one other friend have been practicing social distancing. The other six have reportedly been driving together to Dunkin’ Donuts to drink coffee and then hanging out at one another’s houses. Stanley, whose dad and stepmom work for what have been deemed essential businesses, was horrified when she found out. Stanley’s friend who has been staying home called the other six out on their behavior over text: “Did y’all forget the social distancing thing?” That “put everyone in defense mode,” Stanley said. According to Stanley, the six Dunkin’ regulars began leaving comments about how delicious the coffee is on Stanley’s other friend’s Instagram, and then started a new group chat of their own.

Before the pandemic, Stanley said, these were the girls she did Secret Santa with at Christmastime. Now she’s not sure if she’ll ever speak to them again. Senior year “feels like it has a bunch of holes in it now,” she said.

In normal times, a rift like the one Stanley described might be easy to repair. Picture it: Two teenage girls are rule-followers, while the six other girls in their friend group aren’t; some tension ensues, but look, it’s senior spring. The knowledge that your time together might be ending is a powerful incentive to move past disagreements. But when people are anxious about the future and worried about their loved ones, it’s much harder to forgive and forget. In the current situation, “we’re all feeling increasingly irritable and frustrated, lonely, anxious, and bored,” Kirmayer said. “So we then have less patience for those around us. This is obviously true in romantic relationships; we take out our frustrations on the people that we’re closest to, because we have a certain level of felt security. To some extent, that can also happen in friendships.”

Of course, no disagreement over social distancing is just about following rules. In a pandemic, whether you follow the guidelines recommended by medical authorities has a direct bearing on whether others catch a deadly disease—and people like Amaya and Stanley have been disturbed by their friends’ apparently cavalier attitudes toward public health. So has Rick, 42, who recently found himself wondering whether he and a classmate from college had reached the end of their friendship. (Rick asked to be identified only by his first name to protect his and his friend’s privacy.)

Rick and his friend, he told me, have known for a long time that they occupy different spots on the ideological spectrum; Rick tends to lean progressive, while his friend has a libertarian bent. In the past, despite the occasional flare-up over politics, they still managed to connect over pop culture and college memories. But in late March, Rick saw that his friend had said in a Facebook post that social distancing should be a matter of individual choice rather than a mandatory measure. Rick responded, and several tense exchanges ensued.

“Even if you have a fundamental disagreement about being pro-life, pro-choice, [for or against] marriage equality, often those things [can be] kind of hypothetical,” Rick said. “But there’s something so immediate about this. If you flout these social-distancing protocols, you are endangering exponentially increasing numbers of people.” For Rick, a bright line had suddenly appeared between which values he could accept in a friend and which values he couldn’t. “That kind of fueled my sense of I’m not gonna let this pass,” he said. If he were to run into his friend in person when this is all over, he added, he’d be hesitant to resume the relationship.

Certainly, it’s difficult to learn that a friend holds a belief you find abhorrent; certain stories I heard while reporting this article reminded me of what the United States felt like after the 2016 election, when some people felt shocked by the voting choices of people whose politics they had thought were similar to their own. “We assume that our friends think the same way we do, and so when we’re met with a situation where our friend is behaving in a way that’s opposite to how we’re responding, that can be very surprising and jarring,” Kirmayer said. But ignoring public-health guidance can be especially disruptive to friendships, she explained. Social distancing works best if everyone does it; when you protect yourself, you’re protecting others; in turn, other people’s self-protection protects you. If some people opt out of the collective effort, you may feel like they’ve explicitly declined to have your back, even if you still have theirs. “Reciprocity is a core expectation of our friendships,” Kirmayer said.

A time in which daily life is totally disrupted, a deadly disease is rampant, and everyone’s financial future seems precarious is a particularly bad moment to lose friends. So when friends are at odds over social distancing, Kirmayer recommends preserving those friendships when possible, and using empathy rather than shaming to resolve the conflict.

[Read: What to say instead of ‘How are you?’ during a pandemic]

She encourages her clients to avoid accusatory or blaming language like “You shouldn’t do that” or “I don’t like it that you do this,” and to start with an open-ended question like “What value is [this measure you don’t follow] conflicting with?” And it’s important, she added, to emphasize that you’re concerned for your friend’s safety as well as your own.

Acknowledging the feelings that inform a friend’s opinions can make a conversation less confrontational. “It helps in those conversations to try to validate for our friends why this is hard. Not to make it seem like engaging in social distancing and taking this seriously is easy,” Kirmayer said. Perhaps that means acknowledging circumstances that make coping with the pandemic harder, such as a friend who lives alone, or is single, or has lost income, or has a less-than-desirable home situation. “Those kinds of statements can really be disarming, and can help our friends to hear our message more clearly,” Kirmayer said.

Perhaps the best way to bolster a friendship that has become tense, though, is to actively help the friend in question with whatever it is that makes social distancing so hard for them. “Offer to do things to make it easier for a friend to take it seriously. Like, ‘Can I help? Can I support you in this in any way?’” Kirmayer said. “‘Can I drop off some groceries? Can we prioritize social time online so that you’re not feeling as lonely?’” Gestures such as sharing a FaceTime cooking session, making a cloth mask for someone, or sending a link to an at-home haircut or hair-color video tutorial could go a long way. In a pandemic, everyday life is harder by an order of magnitude because people can’t physically be together. But we can try to metaphorically meet our friends where they are. 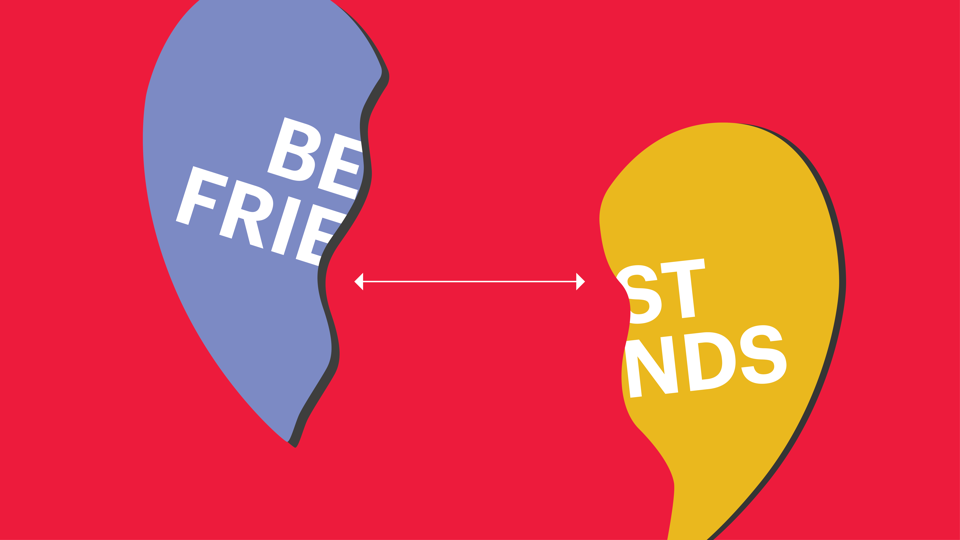