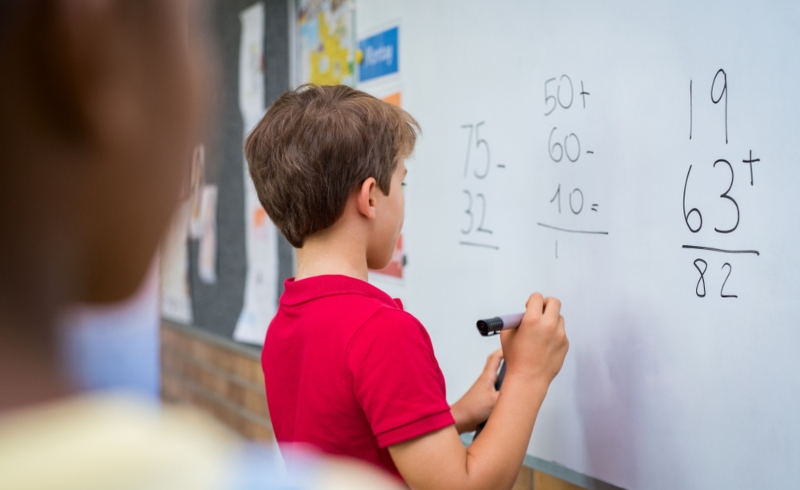 It’s natural to think that mathematics is primarily about numbers. In school, we first learn how to recite numbers and then spend considerable time writing them down and manipulating them on paper. Of course, numerals (the written notation for numbers), along with other symbols, are critical for communicating ideas about quantities and expressing how they relate to each other.

But what appears to be lost in conversations about school mathematics, however, is that mathematics is primarily about thinking.

Rather than debating whether “discovery learning” or “the basics” are most important for children, more attention is needed to support the development of children’s thinking about quantities and space.

A considerable amount of research now shows that children’s success in school depends on the extent to which parents and educators encourage them to think mathematically in the years before they enter Grade 1.

It is possible — necessary, even — to focus on children’s thinking about numeracy in the early years so they begin their formal education on the right foot.

Imagine you are having a conversation with a group of kindergarteners. You read them a story about two children at grandma’s house who are sharing four cookies equally. You engage them in a conversation about how many cookies each child gets. Some of the children take out play cookies and act it out. Others draw pictures to think about the problem.

Then you ask what would happen if two more children came to the table. Would each child get more, fewer or the same number of cookies? How do you know?

In such a situation, children engage in a lively discussion about equivalence, partitioning and distributing and comparing quantities.

There are numerous benefits to these types of conversations. Clearly, there are cognitive and social advantages to children of articulating and justifying their thinking. The point here, however, is that children are engaging with concepts that are foundational to the elementary curriculum: concepts such as the meaning of division, the importance of equal partitions and what happens to each share when the divisor (the number of sharers) gets bigger.

Also important to note is that the children are grappling with important mathematical ideas without writing down formal representations, such as numerals or the signs for division (÷) or equals (=).

Reflecting on concepts and thinking about what they mean is at the heart of mathematics; such activity is not only possible in the early years, it’s essential. It needs to be present throughout all the years of a child’s mathematical development, in school and out.

The students and collaborators in our research lab at Concordia University are finding that children are capable of engaging with many big ideas that span the mathematics curriculum: multiplication, division, estimation, equivalence, place value, fractions and even algebraic reasoning.

This is not to suggest that their ideas are fully mature or that they are proficient in expressing their ideas formally. Indeed, these ideas emerge from explorations with objects and actions in real-world contexts.

Extending and refining children’s intuitive, yet deeply mathematical ideas, and giving them the symbols to more efficiently represent these ideas thus become the primary objective of mathematics teaching in school.

For example, a kindergartener can understand that if she has five spoons and her friend also has five spoons, they have the same number of objects. A Grade 1 teacher can then show this student the symbol for expressing numerical equivalence with the use of the equal sign symbol (5 = 5). A five-year-old child can show how three people can share one chocolate bar equally by partitioning a rectangle into three equal parts. Or, a Grade 1 teacher can show this child how to express the quantity each person receives, both in words, “one-third,” and numerically as “1/3.”

Such symbols, and the generalizations they represent, can in turn be used to build more complex ideas, thus revealing the cumulative and iterative nature of mathematics learning.

Without a focus on meaning at all levels of teaching, children who spend time in school manipulating numbers on a piece of paper, for example, are unlikely to develop their mathematical understanding.

We now know that if children are not exposed to important mathematical ideas through activity and conversation in the early years, they will lack important foundations for Grade 1 and, most importantly, it will become increasingly difficult for them to catch up to their more equipped peers in school.

This effect is prominent for many children living in poverty who are particularly at risk for early numeracy difficulties. Children often lack key foundational competencies when they enter kindergarten having had little exposure to “math talk” in the home.

Although it is never too late to help a child who is struggling in mathematics, the opportunities to close the gap become fewer and fewer as children progress through the school system.

Preparing young children for learning mathematics in school means having conversations with them about mathematical ideas, but it does not mean, for instance, adapting a Grade 1 curriculum in early childhood settings.

Rather, it means laying groundwork by engaging children in ideas that will allow for the development of mathematical proficiency throughout their schooling. In this way, there is no qualitative difference between numeracy in early childhood settings and mathematics in elementary school.

A first step in engaging young children in foundational numeracy concepts is recognizing the continuity in children’s development, which will provide a clearer view on how to help them at any age.

This article is republished from The Conversation under a Creative Commons license. Read the original article.

The post Mathematical Thinking Begins in the Early Years With Dialogue and Real-World Exploration appeared first on The Good Men Project.