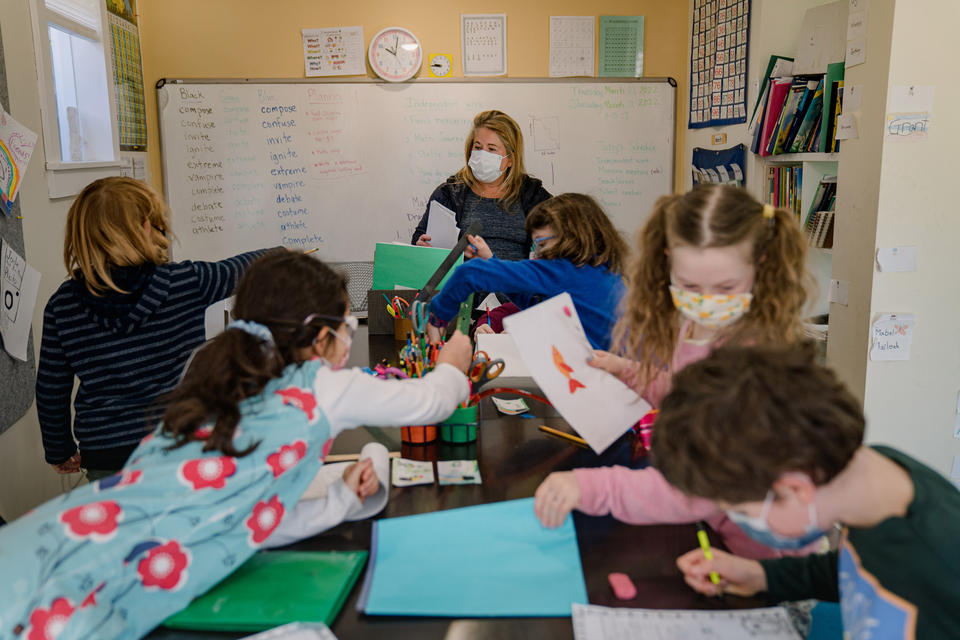 In a one-room schoolhouse that used to be a garage named after a dog called Gus, the eight students at Madrona Village School discussed plans on how to free an elephant from a fenced enclosure.

Eight second and third grade students were in deep discussion over their hand-drawn plans of various simple machines.

“I used an inclined plane,” third-grader Grant Thompson told teacher Lindsay Eicher, demonstrating how the elephant would walk up and down a ramp to find its freedom.

The private independent school was founded in the midst of the pandemic, as statewide public K-12 enrollment dipped. It is an example of one of the ways that families responded during the uncertainty of education during the pandemic.

Eight-year-old Nova Villegas enrolled in the private school after being home-schooled.

“It’s the coolest school ever,” the second grader said. “I get to meet people at my school.” 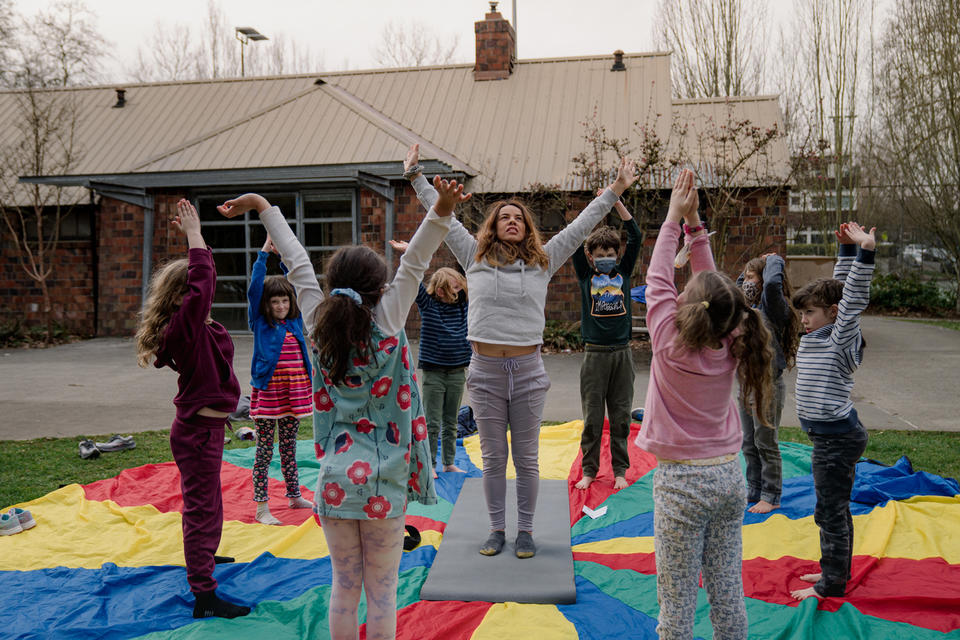 As Crosscut reported in February, between the 2019-20 school year and this year, Washington public schools have seen at least a 4% drop in enrollment — or at least 40,000 students. In 2019, there were 1.12 million students enrolled in public K-12 schools. That has dropped to about 1.07 million in the latest counts, not including pre-K.

During that time period, home-school and private school enrollment in Washington state soared by thousands of students, though that did not account for the entire decrease.

The drop in enrollment in Washington state is not unique. In the first full school year after the pandemic, public schools nationwide saw a 3% drop in enrollment. The biggest drops nationwide were in preschool enrollment, which fell by 22%, and kindergarten, which declined 9%, according to numbers released last year by the National Center for Education Statistics.

That drop in Washington state occurred as schools were among the first institutions to make major changes, in March 2020, to slow the spread of the virus that causes COVID-19, with a switch to all-remote learning for an unknown period of time. 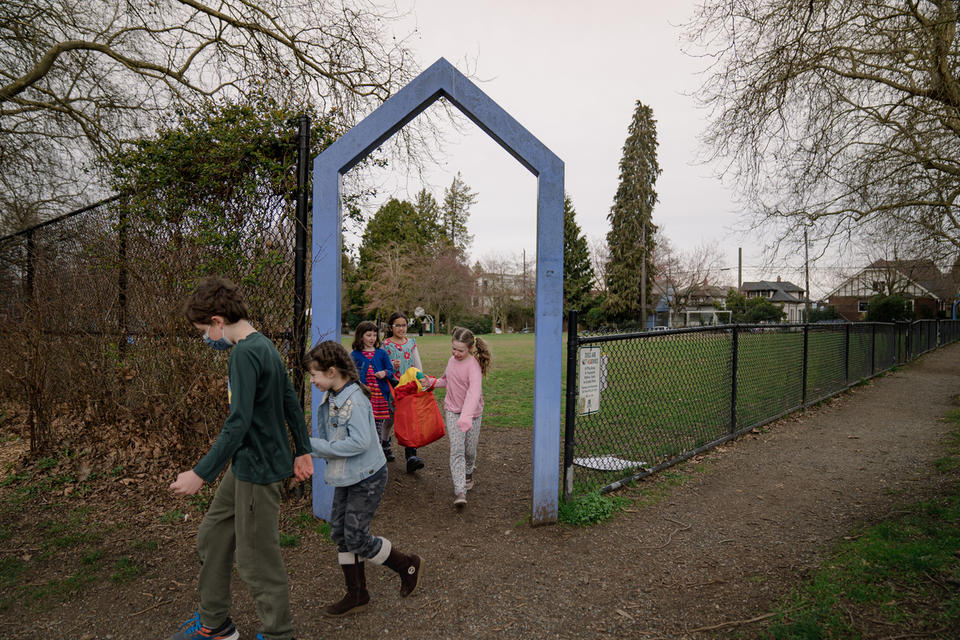 As the pandemic progressed, Washington schools continued to make major adjustments, including holding classes remotely for months and providing all students with technology to work from home. This school year, students returned to classrooms, with strict mask-wearing initially enforced — a requirement that was lifted only recently.

The seeds of Madrona Village School were borne from these changes in schools.

Founder Megan Haas said she and another parent established the brand new private school after they created a “pod” for remote learning during the pandemic. The students initially would gather together and attend their own classes remotely on their laptops to be taught by teachers at their respective public and private schools. The pod brought in Eicher to help the students through their remote schooling.

Their pod experience transitioned to a one-room schoolhouse approved by the state as a private school, with the parents hiring Eicher and another teacher to create lessons for the students to learn together in a formal school experience. 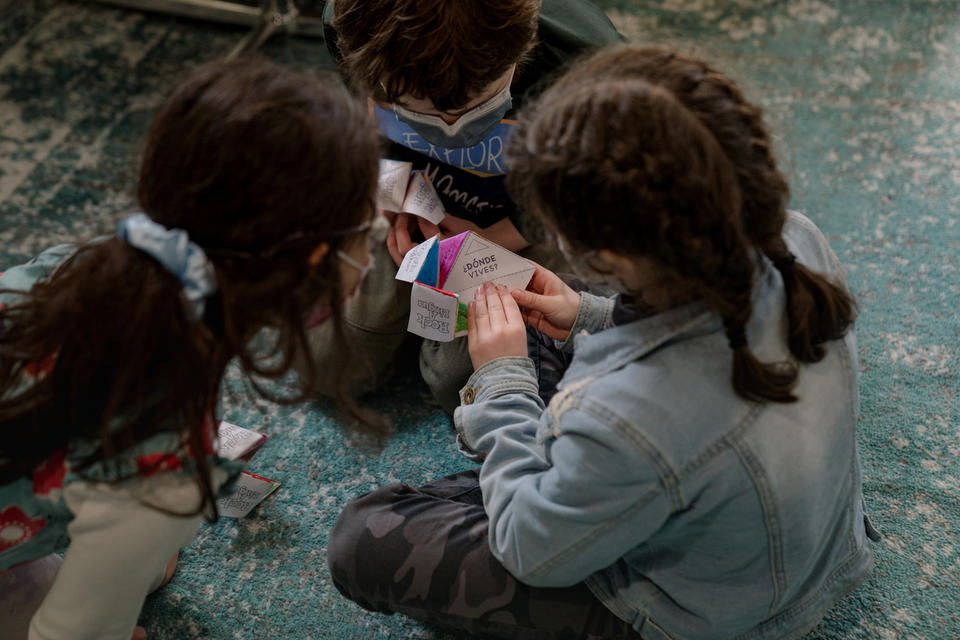 “It was about her social life,” said Nova Villegas’ father, Steven “Krash” Villegas. Home-schooling during a time of social distancing was taking a toll, and the small school is his daughter’s first experience in a school.

“During the pandemic, face-to-face contact was super special,” he said.

Along with lead teacher Eicher, the school hired Mariluz Garzon to teach Spanish and cultural language studies. Eicher said that while the school’s cohort this year is second and third grade, the very size of the class also allows them to accommodate for each student’s academic level, which covers a wide range.

Now, Madrona Village School is an ongoing venture beyond the pandemic, and it is enrolling students ages 8 to 10 for next year, Haas said. 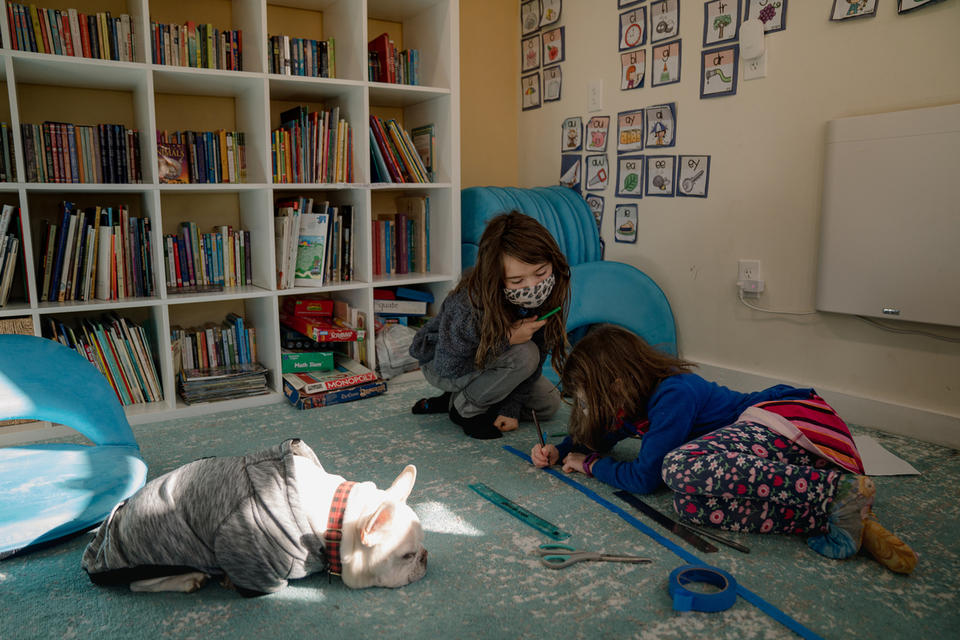 In an informal survey last month, more than 100 parents told Crosscut about their reasons for pulling their children out of school. The reasons were wide ranging, but many cited the schools’ response to the pandemic — objections to mask-wearing and school closures, and those who did not believe schools were doing enough to protect students from the spread of COVID-19.

Remote schooling was a pain point for some families who found options outside of public schools.

“When everything went virtual, my children were learning nothing,” said Melanie Morris, a parent in the Northshore School District. She said her 7-year-old had six to seven Zoom meetings a day.

“I was basically responsible for teaching my children, but had no control or communication around their schedule or curriculum,” she said.

Their family switched to home-schooling.

“They are thriving. We will continue this new lifestyle indefinitely,” Morris said. “Sadly, through this experience I have lost my faith in the public school system and may never get it back.”

Brenda Grigg of Montesano could have enrolled her daughter in kindergarten during the 2020-21 school year, but the family decided to wait in order to prevent the spread of COVID-19.

“But prevention became political. We don’t live in a region that takes prevention seriously, and while our daughter is devoted to wearing a mask, we noticed a laziness with other parents keeping their own children masked up,” she said.

Though her daughter is vaccinated, the spread of the omicron variant in the fall put their kindergarten plans on hold.

“We’re not exactly sure what to do, but the state doesn’t require students to attend public school until age 8, so we’ll try to prepare her for direct enrollment into first grade and teach kindergarten at home,” Grigg said.

For other families, the pandemic wasn’t the only reason to unenroll from public schools.

Sarra Burnett took her children out of the Elma School District in Grays Harbor County. At first it was because her family objected to the mask mandates for students attending in person.

But later, Burnett also took issue with both the way that issues of race are being taught in history classes and the mandated sexual education now required for all students in public K-12 schools. Burnett said she believes that parents should decide when their children are ready for those conversations.

“I am a Native American, so I don’t shy away from race discussions, but I think that each family ought to be responsible to teach their history and heritage over schools taking that on,” she said.

“[I}t became clear that this was not a short-term decision,” Burnett said. “I don’t have much faith in our school system anymore, so I quit my job to stay at home and homeschool my kids.”

Other parents cited very individual reasons for removing their children from the public schools, from cases of bullying to being dissatisfied with public school options for students who needed specific services, such as special education or advanced learning opportunities. 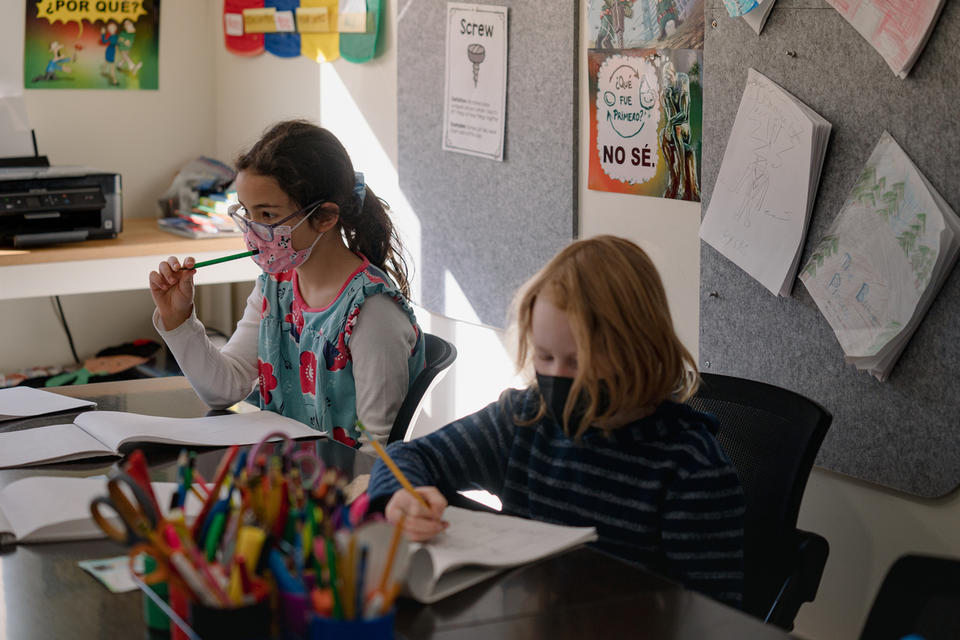 Some parents considered pulling their kids from public schools, but opted not to.

For Brad Van Horne, it was a basic child care issue. He and his wife couldn’t work remotely, and considered liquidating their son’s college savings to pay for private school because they weren’t sure if Seattle Public Schools would offer in-person learning in the 2020-21 school year.

“We ultimately decided against it when we found about Boys & Girls Club of King County offering on-site care at our local elementary while the school was remote,” he said. “We are so thankful for them.”

Linda Rabadi Fair said her family was very conflicted about staying in their public school. She said their family loves their local school and friendships, but objected to the mandates and school closures.

“Our problems were primarily with the district’s handling of the pandemic, and the teachers union’s opposition to returning to classrooms and following the science, which showed for months that schools were safe to return in person,” she said. “We felt abandoned by those two powerful players, but never our individual teachers or school.”

Rabadi Fair also said private school enrollment was competitive, and expensive for families who do not want a religious-based education. Instead of moving out of public schools, Rabadi Fair’s family chose to stay and she joined other parents in advocating for opening schools and easing COVID restrictions.

Other parents who responded to the survey said that they never considered removing their children from public schools, despite the challenges.

Taina Karru-Olsen said that though her child has a disability and a risk of complications from COVID-19, moving her family to an alternative could perpetuate and create systemic inequities in education.

“In leaving, I would have let [the] public off the hook in their task to educate all kids safely, and well [would have] simply used my privileged position to do something extraordinary, and potentially ended up further disadvantaging those students whose families/caregivers are unable to pull their kids,” Karru-Olsen said. “Meaningfully inclusive public education is the right of every student in WA, and the importance of this especially matters for students furthest removed from educational justice.” 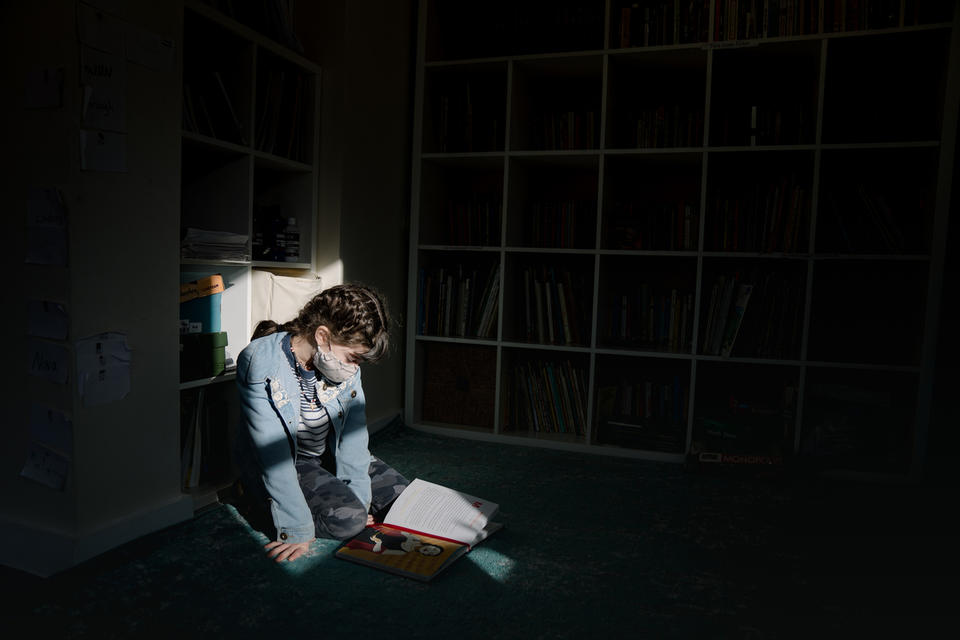 
Need more info? A complete list of benefits is here.