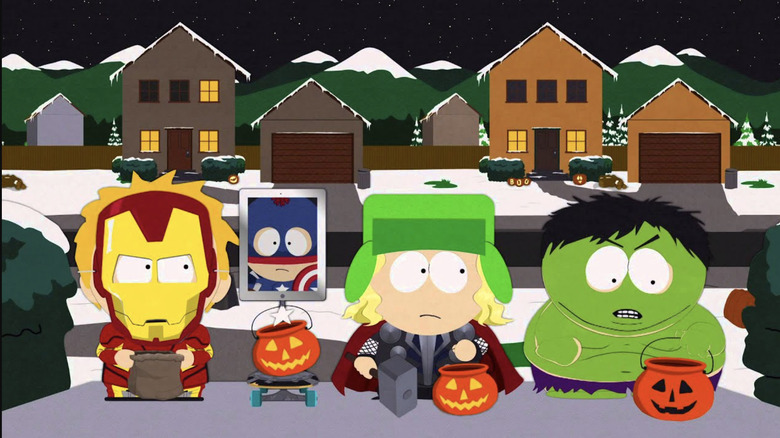 "South Park" turns 25 this year, and for some godforsaken reason, I felt the best way to celebrate would be to binge watch the feature film, play the video games, check out the Paramount+ made-for-TV specials, and consume all TWENTY-FIVE SEASONS of television. Hey, I never said I made good decisions with my free time. Admittedly, I've learned an awful lot by comin' down to South Park and havin' myself a time, and I'm happy to pass on what I've learned with all of you, my dear /Film readers. We've already ranked the best seasons and characters as we reflect on two and a half decades of debauchery, but what about the greatness time forgot? 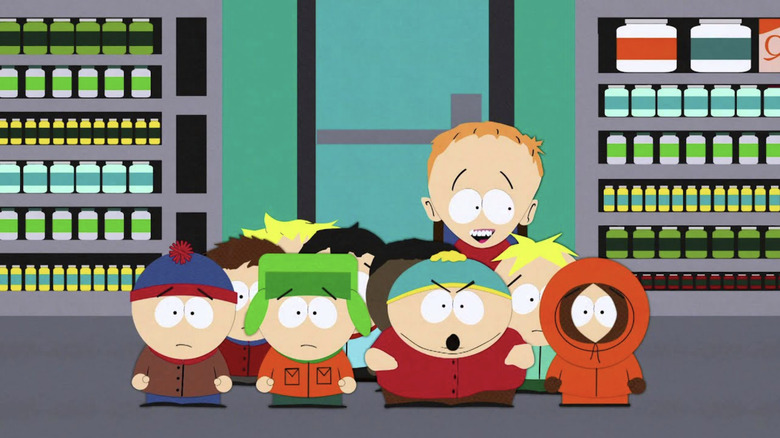 Sex education in American public schools is a joke in and of itself, but "South Park" pushes it to new heights with "Proper Condom Use." Cartman and Kenny are tricked by the fifth graders into believing it's possible to "milk" a dog, when in reality, they're just stimulating a dog until it ejaculates. The two show Stan and Kyle what they've learned, which Stan executes in front of his parents and all of their friends to all of their horror. Stan is grounded for months despite not understanding what he did wrong, and since all of the parents are too embarrassed to teach their kids about sex, they tell the school it is their responsibility.

Unfortunately, Mr. Mackey hasn't had sex in over 20 years so his instruction to the boys is totally useless, and Ms. Choksondik terrifies the girls with graphic descriptions of sexually transmitted diseases without actually explaining that the conditions are passed through sexual intercourse. This leads to a "Mad Max 2: The Road Warrior" inspired showdown between the boys and girls, convinced that the opposite gender is going to give them STDs. People typically remember bits from this episode like Mr. Mackey and Ms. Choksondik having sex and Mr. Garrison teaching the kindergarteners how to apply condoms in the most Mr. Garrison way possible. The episode ends with Chef highlighting how the children have been failed by both the parents and teachers, which is the same unfortunate reality for most kids across the country. 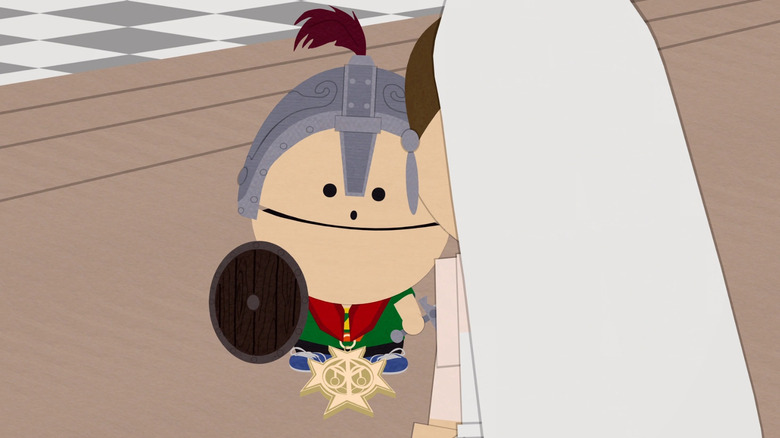 Any Ike-centric "South Park" episode is a winner in my book, and "Royal Pudding" is no exception. At the time of its release, critics disliked the episode, with The A.V. Club calling it, "one of the series' strangest half-hours." The story centers on the Canadian Royal Wedding, complete with nonsensical Canadian royal "traditions" like the Prince of Canada shoving the dismembered arm of his bride-to-be up his anus. The ridiculousness of it all is a way to parody the pretension of the British royal weddings. After the future princess is kidnapped mid-ceremony, all Canadians are called upon to help in bringing her back, which puts Ike on a quest for adventure.

The episode feels like a callback to season 1 episodes like "Volcano!" with the introduction of the Tooth Decay monster feeling an awful lot like Scuzzlebutt. "Royal Pudding" is absurdist "South Park" humor at its best, and offers some great moments for Mr. Mackey as he slowly loses his mind trying to rehearse the kindergarten play about dental hygiene without his star, Ike. Maybe people were too burnt out on Royal Wedding news to fully appreciate the satire in this episode, but upon rewatch, it's too ridiculous not to love. "What a glorious day for Canada, and therefore of course, the world."

A Nightmare On FaceTime 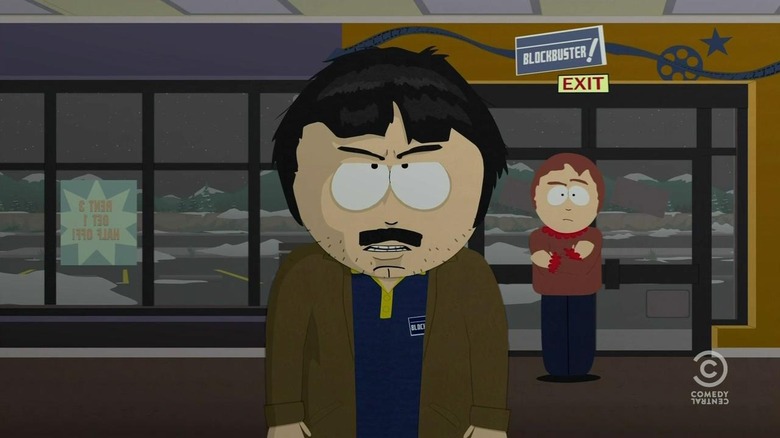 Randy Marsh has slowly become one of the best characters on "South Park," and the Halloween special "A Nightmare on Facetime" is one of his standout episodes. Convinced he's found the ticket to financial success, Randy buys a Blockbuster, despite the fact streaming and Redbox rental machines have all but killed brick and mortar rental stores. The episode spends most of the time lampooning "The Shining," with Randy slowly losing his mind at their isolated store, interacting with the ghosts of Blockbuster customer past and putting his family through hell.

Stan is unable to go trick-or-treating as his dad is forcing him to work at the store, so the rest of the boys strap an iPad on a skateboard so he can virtually join them, and complete their Avengers group costume. Halloween episodes are consistently good on "South Park," but thanks to the biting commentary on our (at the time growing) fixation with streaming and the fear older generations have about pivoting to a digital future, "A Nightmare on FaceTime" is also one of their smartest. This is also the episode where I learned Randy Marsh and I have the same McDonald's order, which honestly has me questioning some of my life choices. (Chicken nuggets with sweet and sour sauce and a Sprite, if you were curious.) 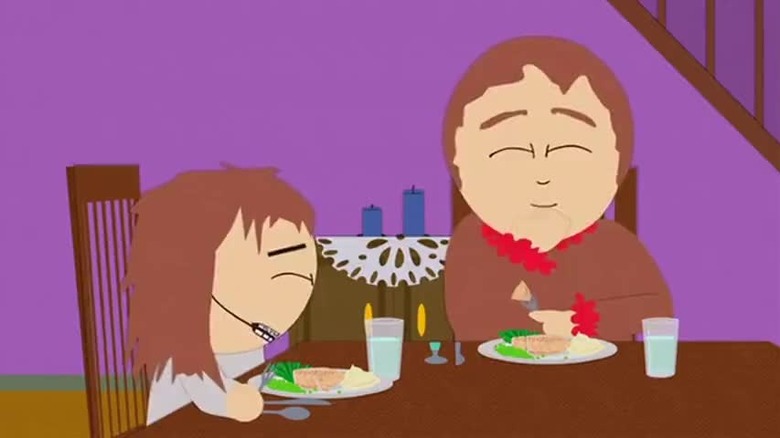 In the second season of "South Park," Parker and Stone played an April Fool's joke on fans by showing "Terrance and Phillip in Not Without My Anus," as the premiere, instead of the promised reveal of Cartman's dad following the season 1 cliffhanger finale. In the season 13 meta episode "Eat, Pray, Queef," the men of South Park are furious when the anticipated episode of "Terrance and Phillip" turns out to be an April Fool's joke and is replaced by a show called "Queef Sisters." The show is exactly like "Terrance and Phillip," but replaces the lead characters with Katherine and Katie, two girls who queef on each other instead of fart.

I know, I know, the premise sounds extremely juvenile even by "South Park" standards, but "Eat, Pray, Queef" is a fantastic look at the sexist double standard when it comes to men, women, and bodily functions. The women of South Park spend most of the episode queefing for fun much to the chagrin of the men, who can't really explain why farts are funny and queefs are gross without admitting they're being sexist. It's a brilliant episode in an already strong season, unfortunately overshadowed by all-time great episodes like "Margaritaville" and "Fishsticks." 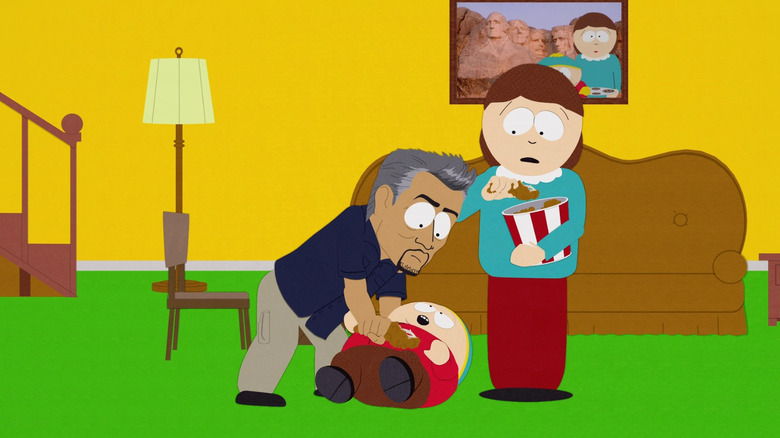 Liane Cartman spends almost the entirety of "South Park" bending to the whims of her sociopathic bigot of a child (until now), but the season 10 episode "Tsst" is one of the most prominent example we see of how hard it is for her to parent Eric Cartman. She first seeks the help of reality TV nannies to get him under control, but when that doesn't work, she enlists the help of "The Dog Whisperer," Cesar Millan. His techniques, while often reserved for animals, work wonders on Eric and for a brief moment it seems like he's finally changed for good. With Eric no longer taking up all of her time, she attempts to befriend Millan, who makes it clear that his relationship with Liane was simply doing business.

This reignites her codependency issues with Eric, and she immediately goes back to the way things were. This episode is fantastic because not only is it wickedly funny to see someone finally put Eric in his place, but it's also a reminder of how deep "South Park" has the capability of being. The ending moments with Liane resorting to babying Eric again are hard to watch, because we as the viewer recognize how alone she truly is in her community without her son's affections. 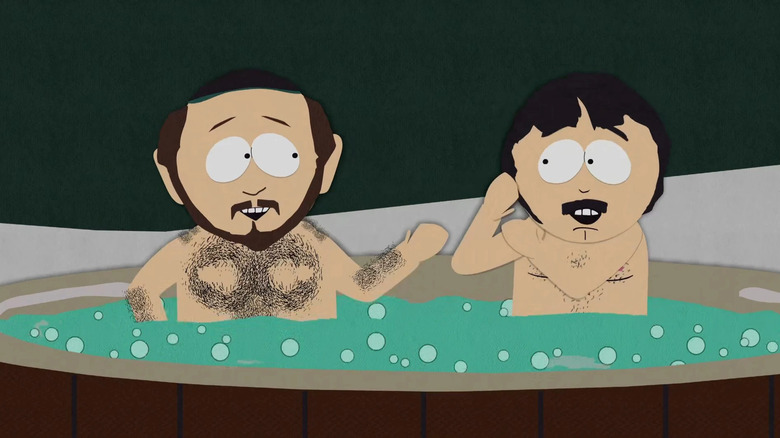 All three episodes take wildly different approaches to comedic storytelling but still manage to fit as a cohesive trilogy with plenty of laughs. Cartman impersonating Will Smith from "Wild, Wild, West" is burned in my memory forever, as is Randy and Gerald's constant sexual tension, and the baby-bear birthday party all of the Squirts attend on their scouting adventures. The trilogy is remembered by die-hard fans for sure, but never gets enough love when discussing the all time great moments. 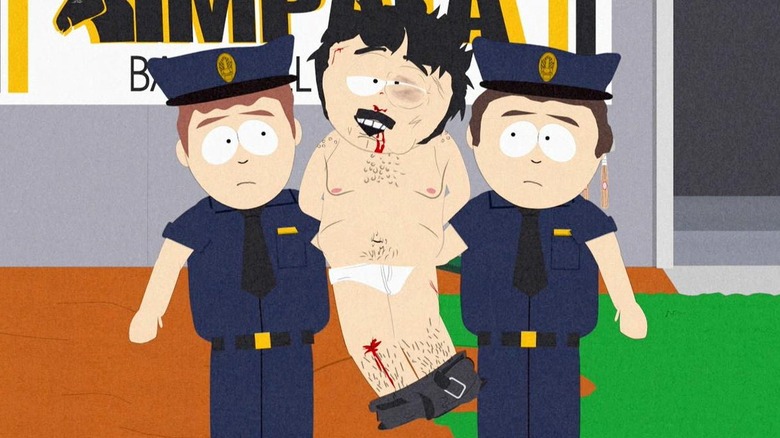 Randy Marsh getting arrested while bloodied and shouting, "Oh, I'm sorry, I THOUGHT THIS WAS AMERICA!" has become one of the most memed moments of "South Park," but few remember the moment comes from an episode about little league baseball. "The Losing Edge" is plotted out similarly to underdog sports movies like "Rocky," with the gimmick being the kids hating baseball and trying to lose on purpose so they can spend their summer playing video games, and Randy training to get into drunken fights with dads of the opposing teams.

The true underdog story belongs to Randy as he gears up to face off with the drunk and obnoxious "Bat Dad," while the kids enlist Kyle's cousin Kyle Schwartz, who is a walking stereotype inspired by Woody Allen, to serve as a reverse ringer to ensure the team loses the little league finals. The drunk and bloodied Randy meme is great, but the episode it comes from is even better. 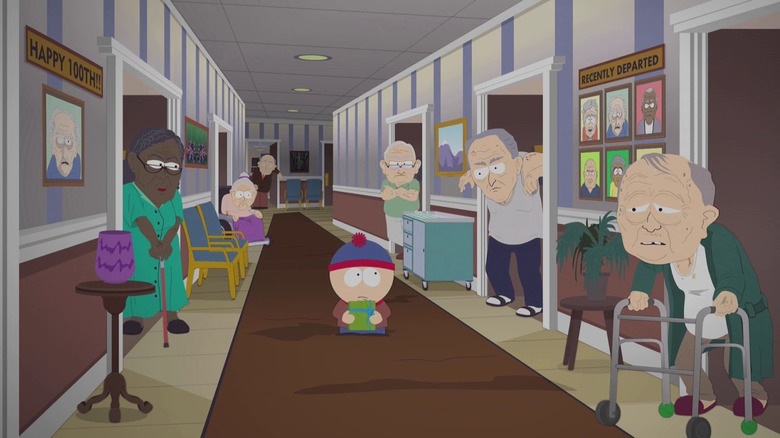 Remember that time Killer Mike wrote a song about being "Locked Up" in an assisted living facility for the elderly? "Hummels & Heroin" is an episode from season 21, arguably a season that most people haven't actually watched having fallen off the "South Park" train years ago. Stan becomes an unwilling participant in the opioid epidemic, being used as a drug mule delivering opiates prescribed to the elderly in exchange for Hummel figurines. The boys are wrangled in to help distract the elderly at one point, performing as a barbershop quartet that sings songs that uh, had likely never been arranged for barbershop performance before.

The episode features a guest performance from Josh Gad who was starring in "The Book of Mormon" at the time, as one the best one-off characters in "South Park" history, the costume-character obsessed Marcus Preston. "Hummels & Heroin" is one of those timeless "South Park" episodes that aren't limited by whatever was going on in the news that week, allowing it to be endlessly rewatchable. It's also a great episode for Grampa Marvin Marsh, who is always a solid source of humor. 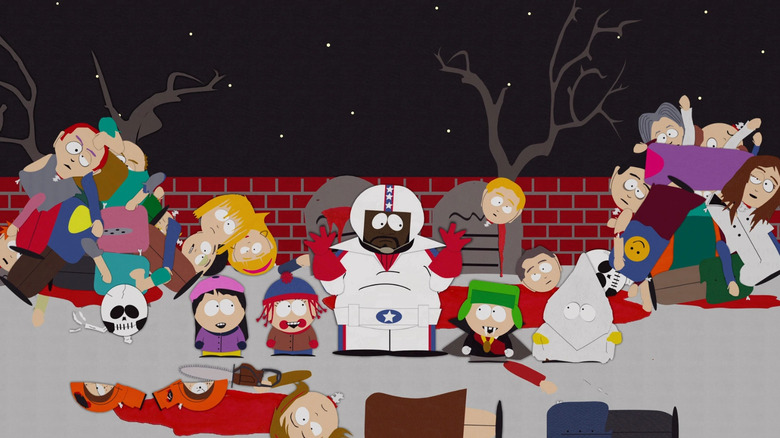 The season 1 Halloween special "Pinkeye" is, in my opinion, the episode that determined whether or not someone was going to continue watching "South Park." The episode is a satire of horror movies, and easily the most offensive episode of the first season. It's painfully nihilistic, graphically violent, and shows the truth of Eric Cartman's bigotry when he dresses up like Adolf Hitler, only to later wear a ghost costume that closely resembles the Ku Klux Klan hoods. "Pinkeye" is classic "South Park," warts and all, and still manages to bring a lot of laughs despite its utterly ridiculous premise of a zombie infestation confused for an outbreak of pinkeye.

The first season of "South Park" is remembered predominantly by the pilot episode, Mecha Streisand, Mr. Hankey, Big Gay Al, and the season finale cliffhanger, but "Pinkeye" deserves to be hailed right along with the rest of the classics. It started the trend of "South Park" having consistently fantastic Halloween specials, and gave us our first look at the extreme levels of degeneracy the show was willing to tackle.

Read this next: The 13 Best Comedy Shows On Amazon Prime Right Now

The post The 10 Best South Park Episodes No One Remembers appeared first on /Film.