LOS ANGELES — Late in USC’s season-opening win over Rice, you may have heard a name that you’d forgotten. Maybe you heard it over the Coliseum P.A. system, or maybe on the broadcast, and it jostled something from the back of your memory.

A former top-100 recruit and the High School Butkus Award winner as a senior at Mater Dei, four years have passed since Tuliaupupu was one of the most sought-after recruits in the country. Four years of injuries, surgeries and happenstance that kept him from making his collegiate debut.

But there he was, a redshirt senior finally playing in cardinal and gold, and making a sack in his first game at a new position, too.

After years of fate being cruel, it paid forward some kindness that day. His father, Turnbull, had been taking pictures of his son’s debut. But the line of scrimmage had moved close enough to where the Tuliaupupus were sitting that Turnbull switched to video and caught his son’s first sack, and his teammates jumping for joy to celebrate his achievement.

“It was just excitement,” Turnbull said. “I’m happy that he’s gotten an opportunity to get back to what he enjoys and what he loves to do.”

Everything changed for Tuliaupupu when Mater Dei played Mission Viejo his senior year. The linebacker dropped back into coverage, and, as he would later relate to his father, it felt like he had stepped on a sprinkler head and his foot had split in half.

Tuliaupupu, who declined to be interviewed for this story, had suffered a fracture of the Lisfranc tendon, which connects the big toe to the other toes on the foot. He missed his freshman season at USC while recovering from surgery meant to allow the tendon to heal naturally.

But after the first week of spring football in 2019, the injury was nagging him. X-rays revealed that Tuliaupupu was one of the unlucky 20% whose Lisfranc injury isn’t healed by the first procedure. So he underwent a second one that fused the ligament back together.

So Tuliaupupu lost another season, and it appeared like a third was in danger after the Pac-12 announced it would not play football in 2020 due to the COVID-19 pandemic. But when the conference reversed course, Tuliaupupu reported to campus ready to finally make his on-field debut.

But the day before training camp, he tore his ACL, an devastating turn of events that doctors told him was related to the initial foot injury. Tuliaupupu’s 2020 season was over before he could even practice.

By the time he finally got healthy in 2021, Clay Helton had already been fired and USC was entrenched in its defensive rotations. Tuliaupupu was relegated to the scout team, waiting for his shot.

“The plan never changed,” Turnbull said. “We never steered away from the plan.”

Tuliaupupu was asked to play some defensive line with the scout team, moving away from linebacker for the first time in his career. When he’d come home, his dad would joke about him adding some weight and moving to the line permanently.

They’d laugh, but the comments turned out to be prescient.

When Lincoln Riley was announced as USC’s new head coach, Tuliaupupu’s ears surely perked up. Riley had recruited Tuliaupupu when the coach was at Oklahoma, even paying the four-star recruit a home visit.

But as Riley assessed the roster, he was unsure about Tuliaupupu’s place on it. He started to “test” Tuliaupupu, give him outs if he wanted to leave the program.

“I was interested to see, like, where he’d be at physically and then maybe more importantly, where he’d be at mentally when we came in,” Riley said. “You go through that much, you never know exactly how a guy is going to handle it.”

Tuliaupupu kept calling Riley and delivering a simple message: You won’t be disappointed if you give me a shot.

Mater Dei head coach Bruce Rollinson got involved, too, calling Riley to vouch for Tuliaupupu. So Riley called the redshirt senior to inform him he was getting his opportunity.

“It was like, at the end, this kid, we’ll see how his body holds up,” Riley said. “But you can’t question his determination, how bad not only he wants to play football, but play football at USC.”

With two years of eligibility remaining, Tuliaupupu could have gone somewhere new and started over after Riley hinted at the door. But it was important for him to finish the journey at USC.

“It’s home,” Turnbull said. “This is where ultimately the journey took place.”

When spring ball came around, Tuliaupupu was quickly moved to defensive line. There was no grand plan behind the decision, defensive coordinator Alex Grinch recalled. Rather, USC needed bodies up front just to get through camp.

What the new coaching staff found, though, was someone who was unafraid of hand-to-hand combat with offensive linemen, and with the athleticism to get real penetration. Plus, the energy that only comes from someone who doesn’t take a day of practice for granted.

“He brings some intensity to the room that we needed,” defensive line coach Shaun Nua said. “It’s a lot faster when you’re closer to the line of scrimmage. Usually it takes players a little while to transition to the front end from the back end. But it did not take him long to get used to coming out of the stance.”

Given the time he missed in fall camp with injuries, there’s a sense that Tuliaupupu has a lot of room to improve in block recognition and his handwork.

“Really a guy that I think can kinda take off in the second half,” Grinch said. “We need him to.”

“I’m as proud of him as anyone on our roster right now,” Riley. added

Though the position change is still a work in progress, Tuliaupupu has two sacks to his name, the latest coming last weekend against Arizona State. He stood up after the play and twisted his arms into a circle in celebration.

Surrounding him were the teammates who fondly call him “Solo,” sharing in the excitement. Nua said he can hear players notify each other on the sidelines whenever Tuliaupupu enters the game.

“World against him, he still has faith in himself,” Trojans defensive lineman Nick Figueroa said. “They called him ‘Bulldog’ in the spring because he just keeps going. [Tuesday], stomach’s bothering him a little bit and throwing up, and then running back and taking reps.”

“He’s a Trojan, for real,” defensive lineman Tuli Tuipulotu added. “Just seeing him out there just celebrating and having fun, it’s good for us.”

It reminds Turnbull of when Tuliaupupu was in kindergarten and came home from school upset.

The teacher had asked everyone to draw what they wanted to be when they grew up. Tuliaupupu, naturally, drew a football player. But he was told he needed to pick something else in case football didn’t work out.

“I still have that drawing. It makes me laugh because all the stuff that he’s gone through,” Turnbull said. “It reminds me that that’s always been his goal. ‘Whatever I gotta go through to get to what the goal is, it’s not that big of a deal.’ It’s just part of the process.” 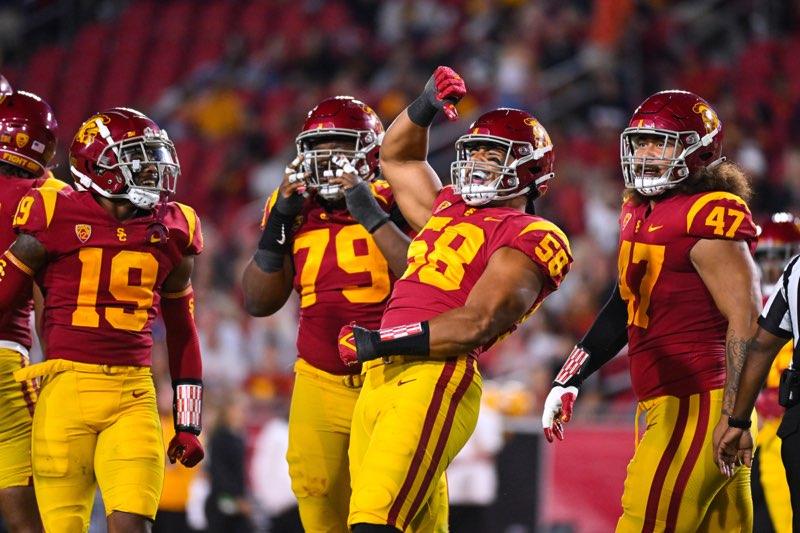