KYIV, Ukraine—Russia’s full-scale invasion of Ukraine has been going on for a month. Every morning from my window, I see hundreds of cars standing in lines to get to a nearby bridge that leads out of Kyiv. Right next to them, I see evacuation trains head westward in the railway section of the same bridge.

Nearly 2 million people have already left my beloved city of Kyiv, our local council has reported. I am one of the roughly 2 million who have stayed. More than 200 Kyivans have been killed and more than 900 have been wounded during the Russian shelling of the city.

Russians have already destroyed more than 70 buildings in Kyiv. Almost every hour, I hear either the work of Ukrainian artillery hitting Russian positions northwest of Kyiv or a Ukrainian air-defense system downing yet another Russian missile over the city. I can already tell the difference between the two sounds. Unfortunately, even destroyed rockets always hit something.

Every evening, I hope this is not the night one of those missiles hits my apartment or the flats of my family members, colleagues, and friends. Every night, I wake up to air-raid sirens or explosions at about 4 a.m. and reach for my phone to read what has been targeted that night. Just a few days ago Russians used a missile to destroy a Kyiv shopping mall and nearby buildings, killing at least eight people.

Now that this has become my new reality, I keep asking myself, Why, despite everything, don’t I want to leave Kyiv?

In the first days of the war, some of my friends and employers from abroad were urging me to leave Kyiv. But I have decided to stay. There are so many reasons why that I can’t even identify the main one.

First of all, you never leave your loved ones, and Kyiv is my love.

It is the city that held three revolutions against pro-Soviet or Russian regimes. It is the city where Ukrainians toppled a corrupt pro-Russian puppet leader and forced him to flee the country.

Kyiv’s hills and golden domes have seen the history of Kyivan Rus, an ancient state of Slavs that existed long before a palace was built on the swamps of Moscow.

But the main thing about Kyiv is that it is a city of freedom. Here, you can be anyone you want, love anyone you want, and feel happy if you work hard. Kyiv is welcoming to foreigners and to Ukrainians from other cities. It used to be so busy. Now that only some 2 million people have stayed here, the city’s empty, silent streets are overwhelming.

The Kremlin can’t let Kyiv be free. Many Russians call Kyiv the mother of Russian cities; in its propaganda justifying the invasion of Ukraine, the Kremlin claims Ukraine is not a real country but a historical part of Russia.

Kyiv is a free city, and Moscow is a city of police control and aggressive imperialism. Moscow is a city where people are afraid to speak their mind, where people just watch as police officers violently beat anti-war protesters. Kyiv is a city that rose up against police brutality in 2014, during the Euromaidan revolution. Now, in other Ukrainian cities and towns, people are not afraid to stand against the armed Russian invaders and try to stop their tanks with their bare hands.

But of course, when I decided to stay in Kyiv, I did not think of all its history and spirit right away.

As Russians were bombing a thermal power plant in my neighborhood, I thought about my granny and my mom. My granny is 76 years old and she told me she did not want to leave her apartment. She said she would rather die there than in some dirty basement. For thousands of Ukrainians, those dirty basements have become a new home. I understood that my granny would not make it if we decided to take a long trip to seek safety in Lviv. My mom’s husband has cancer and he also can’t leave his apartment.

Life in Kyiv has become harsh for people who can’t fully take care of themselves. You have to use your feet to get anywhere, as public transport is a rare thing nowadays. Lines are everywhere, and every simple shopping trip to buy some medicine or food turns into a quest.

Recently, I had to stand in line at a pharmacy for two hours to get heart medicine for my granny. I took the last bottle. I was devastated that the people behind me would not get any heart medicine that day. Of course, the supplies were soon renewed. But that did not reduce the lines. Many people depend on heart medicine, insulin, and other hormones.

Before the war, I hated lines and tried to avoid them as much as possible. Ironically, during the war, those lines and how people have behaved in them has made me fall in love with my city even more.

In Kyiv, a frontline city where sounds of blasts have become a new normal, people are polite and supportive. Strangers joke and discuss the latest news while in lines to buy food and water. Only when there’s another air-raid siren or an explosion do they become quiet. I haven’t seen people try to grab everything for themselves; they wait and take just enough.

There is a spirit of comradery throughout the city. On the road one day, I saw territorial-defense forces digging trenches. Young men were helping one another drag bags of sand. At a checkpoint near a bridge, a man wearing a red cowboy hat with a Winchester rifle on his shoulder was checking cars. Shortly after we passed him I saw a sign reading beware of the mines. Above the sign, on the bridge, local utility workers were constructing a barricade with a bulldozer.

[Eliot A. Cohen: Why can’t the West admit that Ukraine is winning?]

None of the people I saw was a part of the Ukrainian army; the people were just locals, doing everything they could to protect Kyiv. While some, like me, were heading to buy food supplies and medicine for themselves or the elderly, others were delivering humanitarian aid to those in need or digging trenches. I felt I was not alone in the heart of Ukraine. Our Motherland Monument, holding her shield and sword, was watching all of us from above. People around me were doing their best to keep Kyiv alive and protect it from the invasion of the Russian world that has brought nothing but despair and death. I felt so grateful and safe. I couldn’t even think what would happen if those people left the city.

That was the first time I felt, almost physically, how deep my roots have grown into my native city. That is why I can’t leave it. Because if Vladimir Putin uproots us all, he will win. Every other Russian attack that strikes a residential building or a kindergarten or a maternity hospital is aimed to scare us, to cut our roots, to force us to leave or die if we don’t submit to the Kremlin’s dictator.

So far he is definitely losing.

Kyiv is Ukraine’s heart. The city that many experts predicted could fall within 72 hours has been standing for a month like an iron fist. People here are all one. They are ready to die for the heart of our country. I know that residents of Kharkiv, Kherson, Mariupol, and the many other cities and towns of Ukraine that have been bloodied, occupied, or destroyed by the Russian army are just as ready to protect their home.

We all know Putin can kill us, but he will never cut our roots. 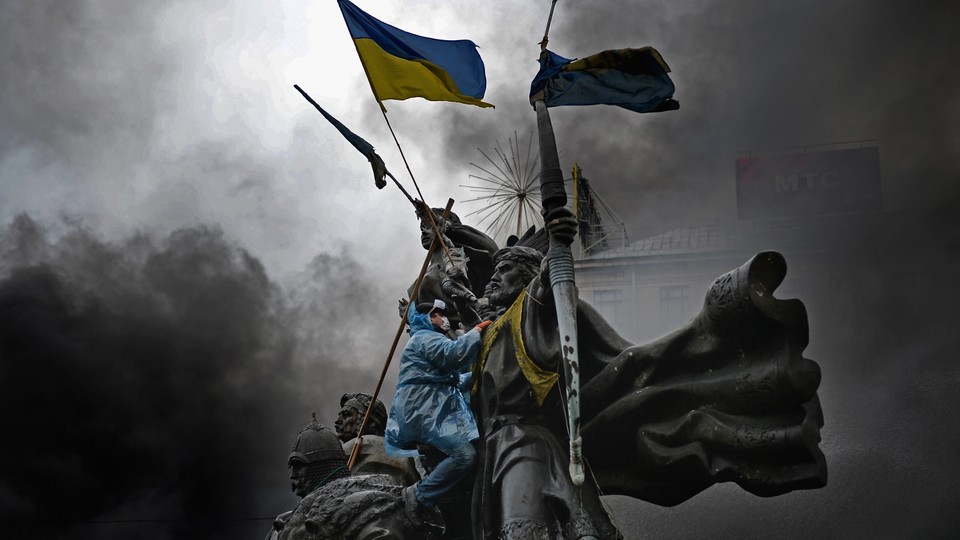