I’ve had three since breakfast, and it’s not even 11 a.m.

I’ve peaked (watching, from my kitchen window, a cat stare into a puddle), I’ve troughed (the impossibility of cosmic triumph), and I’ve bobbed in momentary equilibrium. And here you come again, my mood swing. Under the paving stones, the beach. Under the shining moment, the banana peel. Up, down, ding, dong, round and round and round … I think you might be wearing me out. But I won’t reject you. No, I won’t repudiate you. I’m alive in America in the 2020s, and even-temperedness—emotional homeostasis—is neither attainable nor appropriate.

Besides, it’s always been this way for you and me. Ever since I saw Chariots of Fire. “You, Aubrey, are my most complete man,” says Harold Abrahams, the driven, chippy Olympic sprinter, to his friend Aubrey Montague. Harold is on the massage table, heavy with melancholic self-knowledge, getting a rubdown before his big race. “You’re brave,” he tells Aubrey, in a sad, horizontal voice. “Compassionate. Kind. A content man. That’s your secret. Contentment! I’m 24 and I’ve never known it.”

Great scene. Thus was the binary implanted in my young mind, in 1981. You could be a Harold in this world, grasping and yearning and prickling and perpetually mood-swinging—and with a shot at a gold medal—or you could be an Aubrey. And I knew which one I was.

But to be a Harold all the time, all over your surface area? What’s it for, mood swingers? Why did nature do this to us? I’ll tell you why. Because she has her moods too. Light shifts across the face of that puddle-philosophical cat, the puddle changes color, and if I’m a failure today I might be a titan tomorrow—or in 10 minutes. We are faithful, we who swing, to the humors of reality. That shaft of brightness, that spike of delight, will reliably fade. And at the base of the great gloom-cloud, joy’s little booster rockets are firing up already.

So swing, mood, swing. Twang us madly between the high note and the low. Because if we’re extravagant in our reactions, we are frugal in our stimuli. It really doesn’t take much to set us off. A wet leaf, a guitar solo, a glad look … We are the lightweights; we are the cheap dates.

Hard to live with? Well, yes, possibly. I mean, sure. But if you’re not enjoying me right now, can I ask for your patience? I’m like a London bus. There’ll be another me along in a minute.

This article appears in the January/February 2023 print edition with the headline “Ode to Mood Swings.” 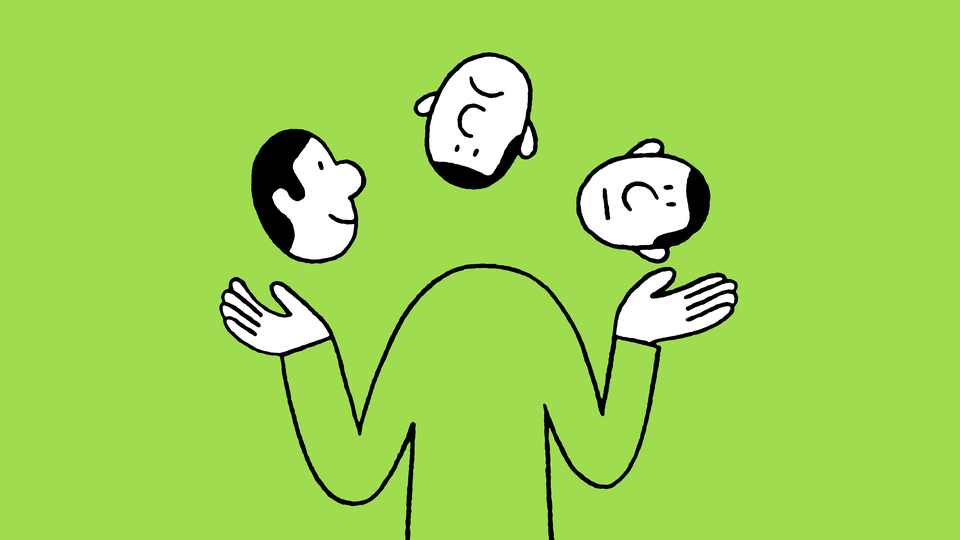