Celebrate the holiday season with these delicious and healthy Cinnamon Apple Streusel Muffins. Not only are they added-sugar-free, making them perfect for little ones, but the scent of cinnamon will fill your home with the warmth of the season.

Now, don’t just make these muffins for the holidays! This recipe is versatile and can also be used to make banana muffins, chocolate muffins, or even savory muffins. Made with a combination of almond flour, tapioca flour, and coconut flour, they are both paleo-friendly and gluten-free, and topped with a mixture of ghee, pecans or walnuts, and cinnamon, these muffins are sure to be a hit with the whole family.

A streusel is a type of crumbly topping that is typically used on baked goods such as muffins, cakes, and pies. It is made by mixing together butter, flour, and sugar, and sometimes also including ingredients like nuts or spices. The mixture is then sprinkled on top of the baked goods before they are baked, resulting in a crunchy and flavorful topping.

Apple streusel is a variation of this topping that is made specifically to be used with apple-based desserts. It typically includes diced apples, cinnamon, and other spices, in addition to the traditional ingredients for streusel. The resulting topping is sweet, spicy, and crunchy, adding a delicious finishing touch to apple desserts.

The recipe for Cinnamon Apple Streusel Muffins includes a streusel topping that is inspired by the traditional version. It is made with a mixture of ghee, pecans or walnuts, and cinnamon, which provides a rich and flavorful finish to the muffins. Additionally, diced apples are mixed into the muffin batter, providing a soft and juicy element that complements the crunchy topping. 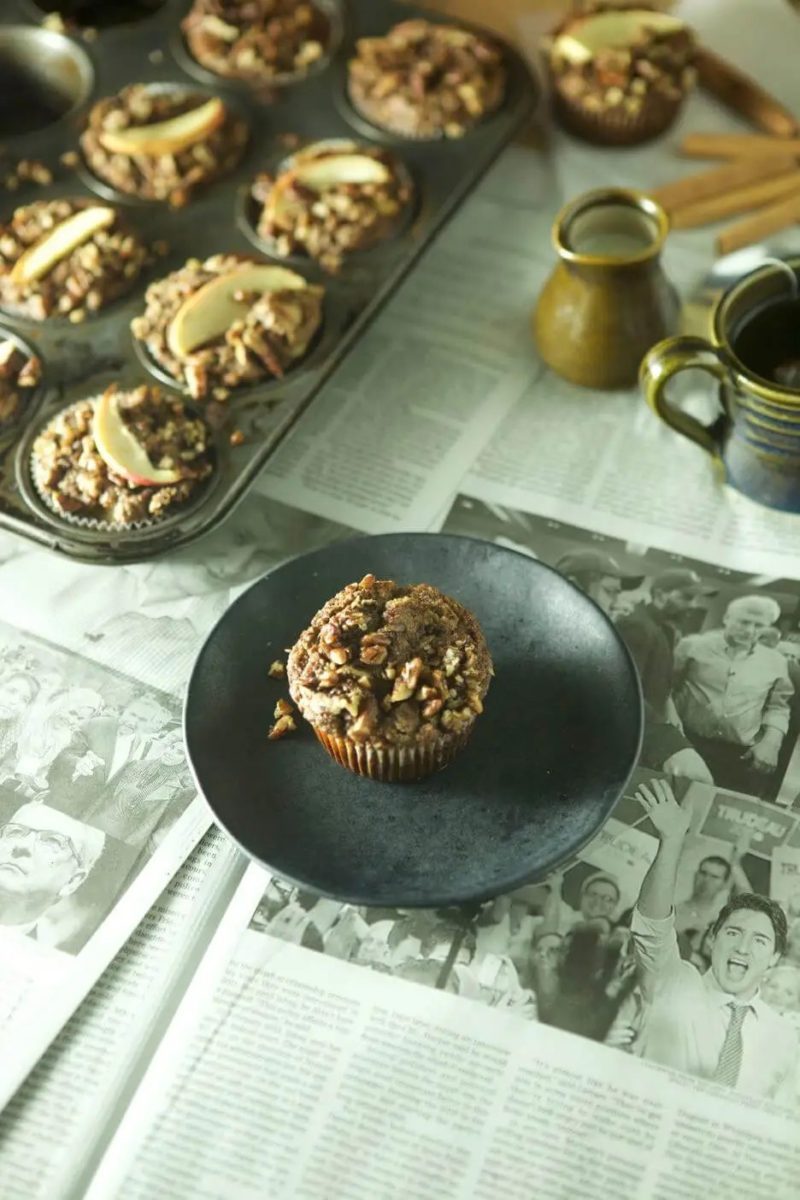 Ghee, also known as clarified butter, is a type of clarified fat that is commonly used in Indian cuisine. It is made by heating butter to separate the milk solids and water from the fat. The resulting product is a golden-colored, rich-tasting fat that is prized for its flavor and health benefits.

One reason why ghee is considered to be better than butter is that it has a higher smoke point, which means it can be heated to a higher temperature before it begins to break down and produce harmful compounds.

Additionally, ghee is lactose-free and contains a higher concentration of fat-soluble vitamins and beneficial fatty acids, making it a healthier option than butter for some people.

In this recipe, ghee adds a rich, buttery flavor to the topping, enhancing the overall taste of the muffins. 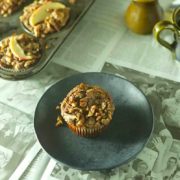 Celebrate the holiday season with these delicious and healthy Cinnamon Apple Streusel Muffins. Not only are they added-sugar-free, making them perfect for little ones, but the scent of cinnamon will fill your home with the warmth of the season.
Course Baking, Bread, Dessert, muffins
Cuisine American
Keyword apples, baking, christmas, fall food, muffins, streusel
Prep Time 10 minutes
Cook Time 20 minutes
Servings 12 muffins