These Chocolate Pecan Pie Bars with Brown Butter have a layer of salted shortbread, followed by a layer of rich (also salted!) chocolate filling and are topped off with a bourbon-infused brown butter pecan filling. They’re rich, delicious and perfect for your holiday table! 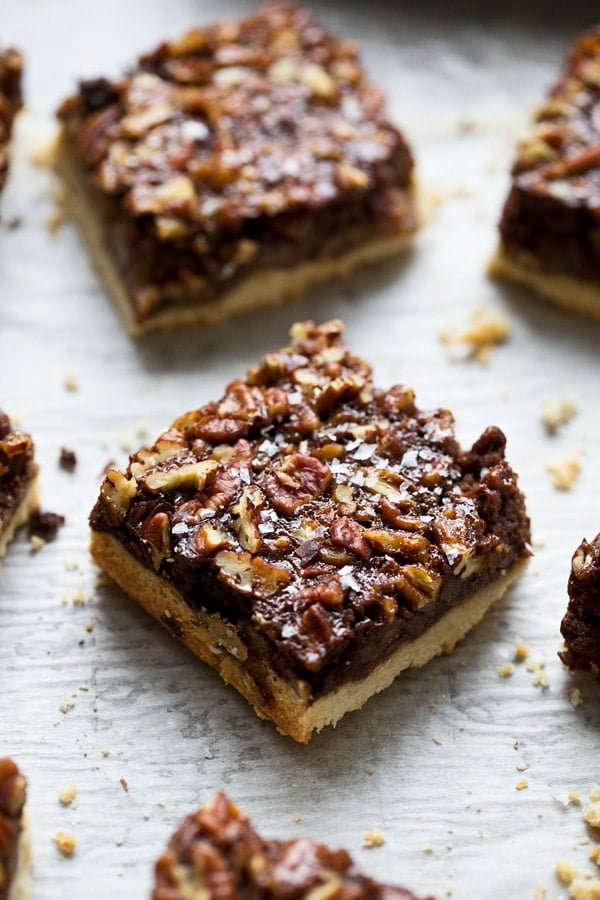 It literally blows my mind that Thanksgiving is just a few short weeks away. I mean, how??

While the weather around here definitely reflects the upcoming holiday, my mental state is nowhere near ready for the holidays to come and go. It seems as quickly as they begin, they’re over, so I plan on staying in a perpetual state of holiday bliss from now until eternity.

I’m planning on making that happen by soaking up the season as much as I can with constant Christmas music, obscene decorations and flooding the Internet with as many holiday recipes as I can crank out.

And it begins with Chocolate Pecan Pie Bars. 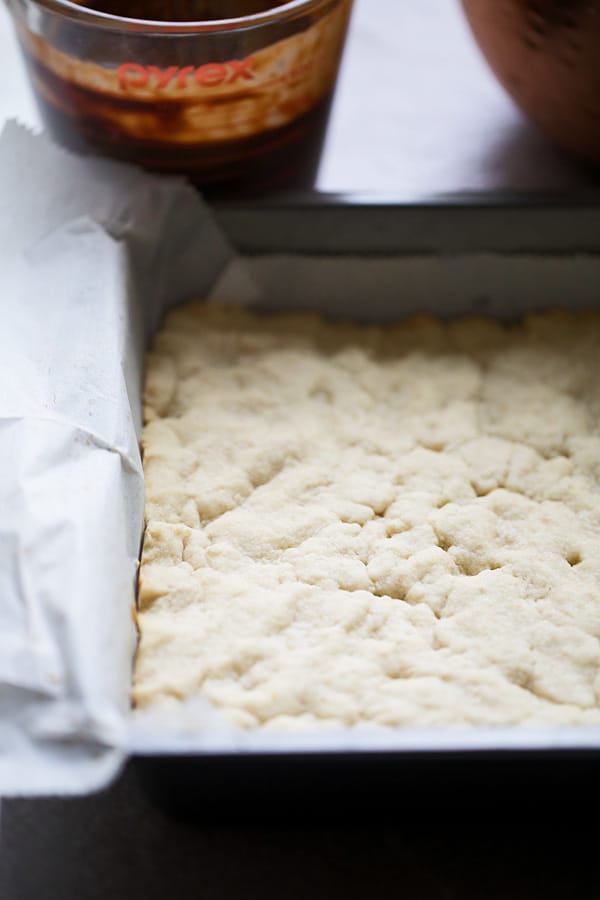 We’ve been on the Thanksgiving track for weeks now, and I’ve shared multiple recipes for your menus like these mashed potatoes, stuffed acorn squash, and this mashed cauliflower, in addition to the plethora of recipe I have in the archives, BUT I’ve yet to share a dessert recipe.

This isn’t entirely by happenstance, since desserts aren’t typically my expertise when it comes to recipe developing, but I’ve been craving pecan pie something fierce as of late, so I set out to make a version completely tailored to my liking.

Instead of throwing together a traditional pecan pie (Because what fun would that be?), I took the classic version, fancied it up with bourbon and brown butter, layered it on top of a rich chocolate filling and a buttery shortbread crust for a bar that may just rival even the most delicious of bakery pecan pies. I guess you could say this a bourbon pecan pie meets chocolate pecan pie meets pecan bar.

Now I’m not one for cloyingly sweet desserts so these guys have the perfect balance of sweetness for me, but don’t worry, it should still appeal to those with a generous sweet tooth as well. 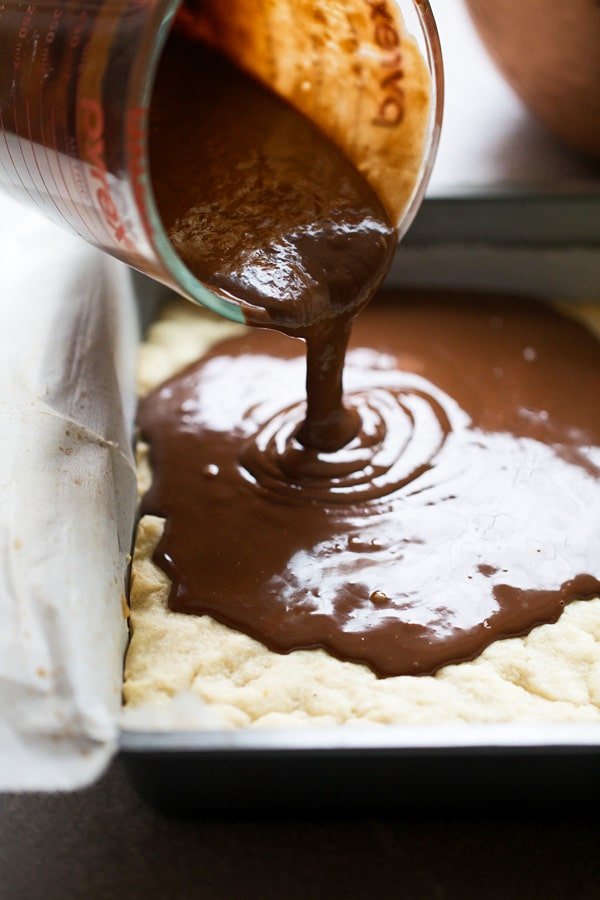 Flour. All purpose flour is what you’ll need to use.

Butter. The key to the best shortbread cookie is to use lots of butter. Unlike a pastry crust, the butter shouldn’t be cold, it should be room temp so everything blends together seamlessly.

Sugar. Just enough white sugar to make the crust sweet, but not overly so.

Flavorings. Lots of flaked sea salt and almond extract. I prefer almond extract over vanilla extract simply because I like the flavor better. It has this nutty, deep flavor I adore.

Chocolate. Bittersweet chocolate is what you want to use here. If you want an even richer chocolate flavor bump it up to a higher chocolate content. However, the higher the cacao concentration, the less sugar in the chocolate. So be sure to adjust the sugar. I wouldn’t recommend using milk chocolate here, it just doesn’t have the aggressive punch of chocolate necessary here.

Heavy cream. I use the heavy cream to almost mimic the consistency of a chocolate ganache. It also helps to make sure the chocolate doesn’t solidify when the bars cool to room temeperature.

Egg. Without an egg, this would just be chocolate ganache. The egg gives the filling a flourless chocolate-like consistency, which I love as the base of these chocolate pecan pie bars.

Salt. Because flakes of sea salt are always a good thing.

Pecans. Duh. I like to get pecan halves and then roughly chop them. There’s a little bit more variation in texture than you get when you buy pre-chopped pecans, which I love. If you don’t feel like chopping them, by all means, buy them chopped.

Butter. Butter in an essential ingredient in pecan pie bars, and here, we use it in the browned state. It has infinitely more flavor than plain melted butter, and you will thank me for making you add an extra step in the preparation.

Corn syrup. This not only helps to sweeten the filling, but it also helps to create that sticky, gooey texture we all love in pecan pie.

Brown sugar. A lot of recipes call for white sugar, but I love the deep molasses flavor of brown sugar. To me, it pair perfectly with brown butter and pecans, and feels a little bit more festive.

Bourbon. Because if we’re going to have chocolate, brown butter, and all the things, we may as well add a little bit of liquor. A little bourbon never hurt anyone, amiright?

Eggs. Eggs give the filling a custard-like texture and binds everything together. 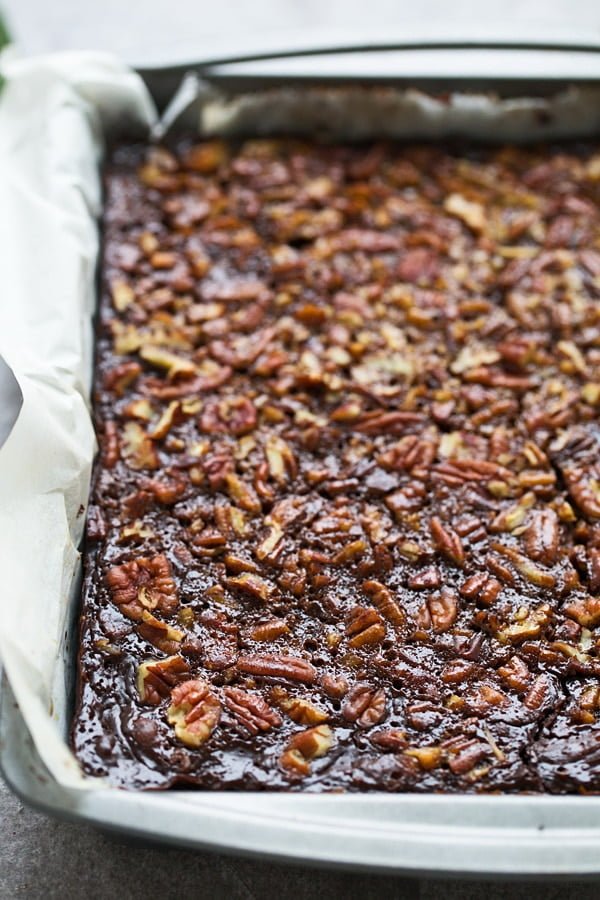 Just as all pies begin, this one starts with crust, specifically, a thick layer of shortbread crust. The recipe I used is an adaptation of my Mom’s friend Susie’s famous shortbread cookies. As written, it produces a pretty sturdy cookie, and while I did still want the cookie base to be solid enough to hold the filling, I also wanted it to be sort of soft, so I pared down the amount of flour to reflect that.

Shortbread crusts are one my favorites simply because there’s little room for error. You just throw the butter and sugar in the stand mixer, beat it into oblivion and then add in almond extract and flour and gently mix until it’s combined. It’s pressed into a parchment-lined pan and popped into the oven while the other components are put together.

Cream the butter and sugar. Add softened butter and sugar to the bottom of a stand mixer. Beat on high until fluffy, about 3 minutes. Add almond extract, beat until combined.

Add flour and salt. Turn the mixer on low and add flour. Mix on slow, then medium until combined.

Bake the shortbread. Grease a square baking dish. Press the dough into the bottom of the prepared pan. Bake for 15 minutes or until shortbread is just starting to turn a very pale brown. Remove from oven and cool slightly 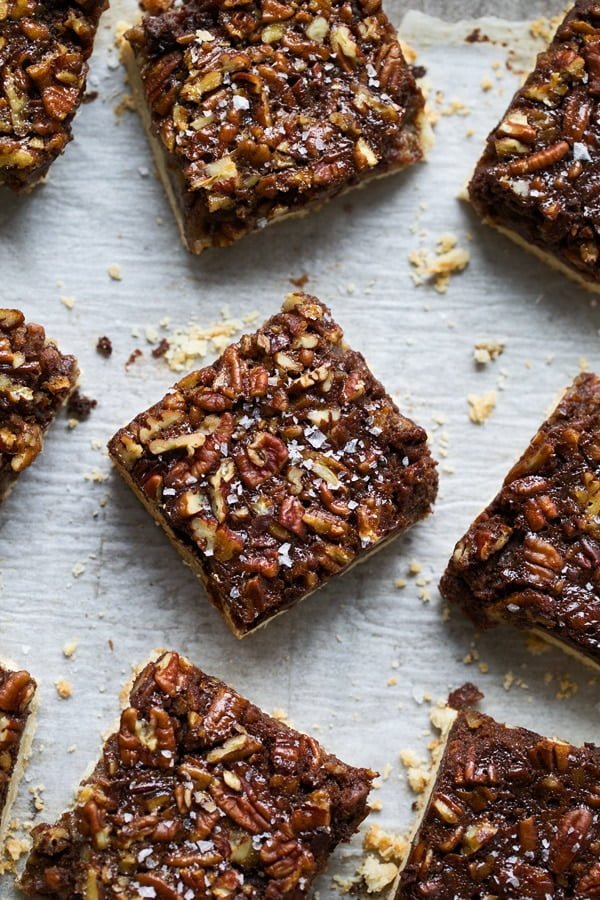 The chocolate filling is super simple. I wanted it be almost chocolate ganache-like, so it’s really dense and rich. Because the filling had to bake along with the pecan filling, I tried to mimic the texture of a traditional chocolate ganache with cream and semi-sweet chocolate and then add in a egg to bind everything together, which still retains that ooey gooey chocolate factor after baking.

How to make the chocolate filling:  Add heavy cream to a small saucepan. Heat until simmering. Remove from heat and add chocolate. Whisk until combined. Cool slightly. (I make the pecan filling while the chocolate cools.)

The pecan pie filling is pretty standard, except instead of simply using melted butter, I took the extra step of browning the butter to add in even more flavor to the mixture.

Also bourbon, because why not??

To compliment the nutty pecans and brown butter, I used brown sugar (light or dark will work) instead of white, something I almost always do around this time of year. Corn syrup gives the filling that standard pecan pie texture and a pinch of salt helps to balance out all the sugar.

How too make the Pecan Pie Filling: Add butter to a small skillet. Turn the heat on medium-high and melt butter. When the butter starts to turn brown and smell nutty, swirl the pan. Continue to swirl the pan until the butter is a deep brown color. Transfer to a small bowl to cool slightly. 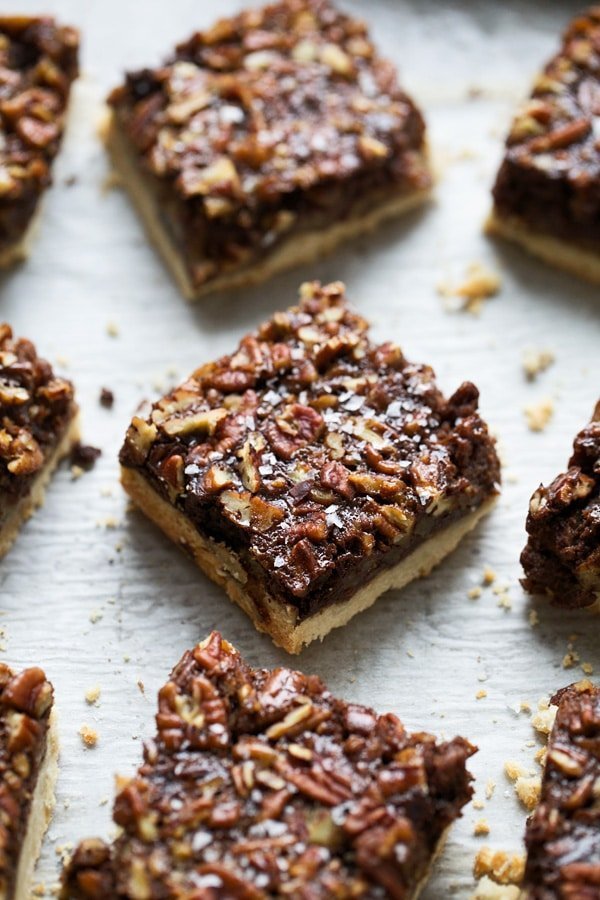 After the bars cool completely, and I mean COMPLETELY, they’re cut into squares, sprinkled with flaked sea salt and ready to be served.

If you take them out and try to cut them before they cool completely, they’ll still be absolutely delicious, but they will just fall apart in your hands, so beware.

These lasted us three days before they were gone and they were every bit as delicious the third day as they were the first, so they’re a great item to make ahead of time. 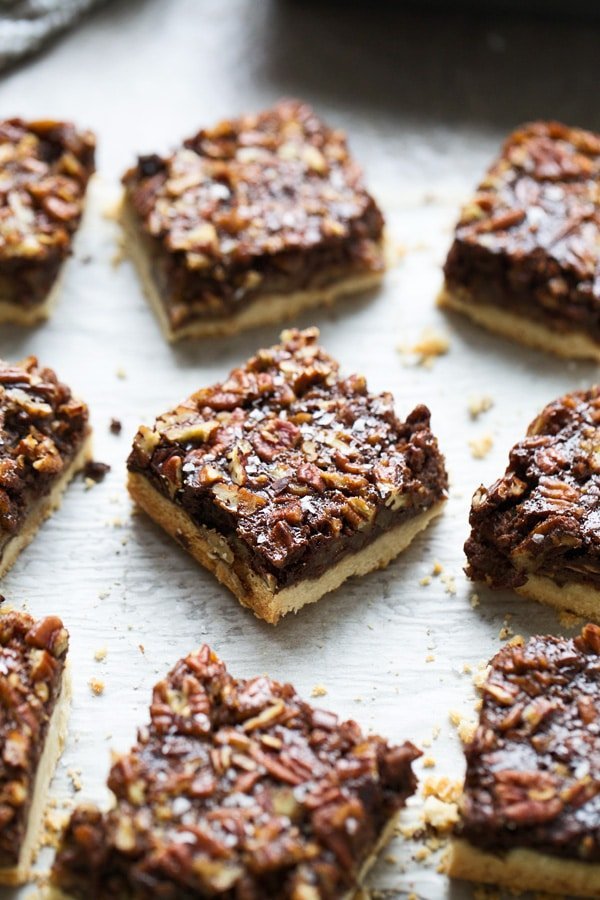 Can I make Chocolate Pecan Pie Bars in advance?

Yes! In fact, you really SHOULD make them in advance. Because they need to cool completely before slicing, it would be in your best interest to make them at least three hours in advance. The nighhttps://www.cookingforkeeps.com/wp-admin/profile.phpt before is even better.

You can make these up to three days in advance. If possible, store them in the baking dish you cooked them in and cover with a lid. If you don’t have a lid, cover with plastic wrap, followed by foil.

Substitutions and Tips and Tricks for Recipe Success 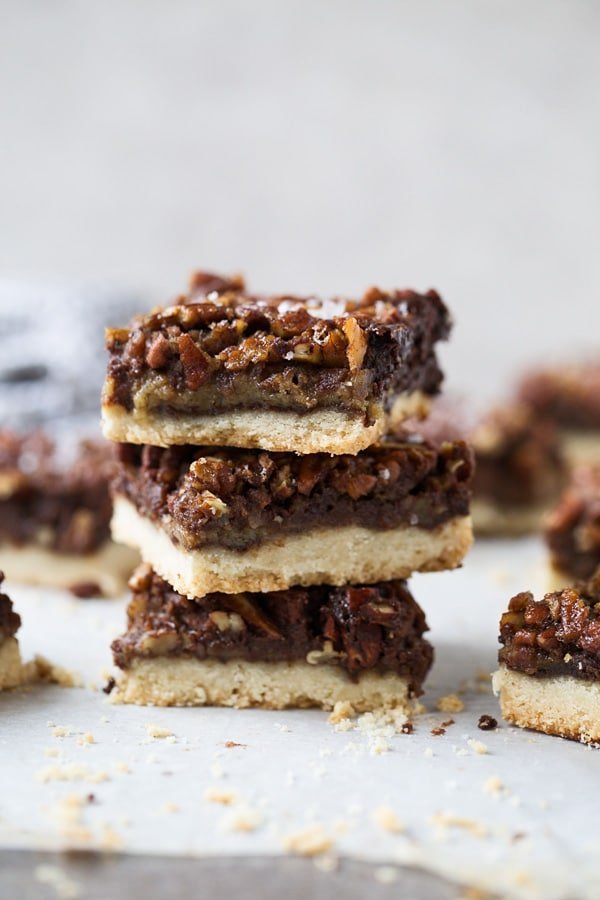 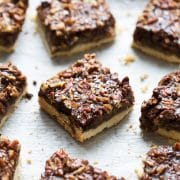 These Brown Butter Chocolate Pecan Bars have a layer of salted shortbread, followed by a layer of rich (also salted!) chocolate filling and are topped off with a bourbon-infused brown butter pecan filling. Rich and delicious!