PARUPPU TENGAI  AND AN INTERCULTURL WEDDING

We enjoyed the best of both worlds when an intercultural wedding was celebrated in the family a month ago . Fun and frolic , music and dance , flowers and lights , food and beverages dotted with various religious ceremonies kept both guests and hosts on toes . 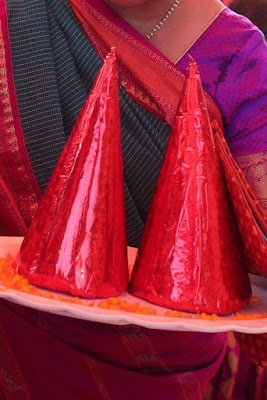 It was a two day wedding commencing with Ganseh pooja . After Haldi , Mehndi and a grand Welcome Lunch, Ring Ceremony and Sangeet  Ceremony followed . Finally the DJ party took over and rocked through the night . The next morning the groom's family chose a time slot before the Mayra Ceremony to conduct the traditional Maalai Maatral (Exchange of garlands) and  Knnoonjal  ( Swing ) ceremonies. Many a time these two traditional customs are rushed through with great tension as the Muhurtam time would be closing in soon . 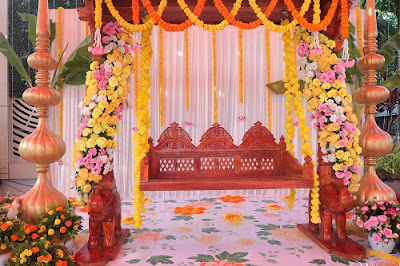 But in this wedding the Muhurtam was scheduled at 9.30 P.M. Hence we had lot of time for conducting the rituals at an enjoyable and leisurely pace. The bride and the groom seated on the shoulders of their respective uncles had a fun time exchanging garlands . The uncles helped the couple dodge each other amidst loud cheering of  excited onlookers .

After the exchange of garlands the couple were made to sit on a decorated swing . Elderly ladies queued up to to feed the couple with banana slices mixed with milk . Red and yellow coloured rice balls were waved around the bride and groom and thrown on all the four directions to protect them from the negative effects of evil eyes .

The high pitched Oonjal songs specially composed for the occasion echoed all around . The groom's father surprised the crowd by singing a Carnatic Classical while the aunt presented an 'abhinayam' (expressing the essence of the lyrics in Bharatanatyam dance Style ) for the same.

Ladies aged from 8 to 80 danced around the bride and the groom for a 'Kummi' Song played by the Naadaswaram artist . The participants went round in circles dancing and clapping to the rhythm of the instrument .  As the momentum caught up more and more ladies joined the fun . 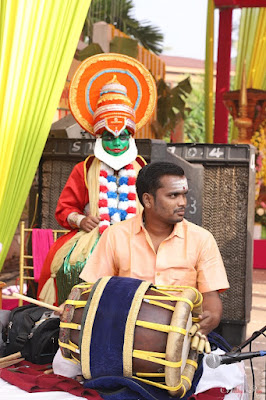 A Kathakali artist in his traditional make up and attire lead the kids carrying trays of  Vilayaadal Saman in a procession . The kids presented the Vilayaadal Saman to the bride in style. A nine year old sweet girl wearing Pattu Pavadai Chokka ( Traditional long skirt and blouse ) read out the meaning of the ritual to the bride and her relatives. A lovely tween wearing Pavadai Davani (Traditional long skirt and half saree ) read out notes describing each and every Vilayaadal Item presented) . 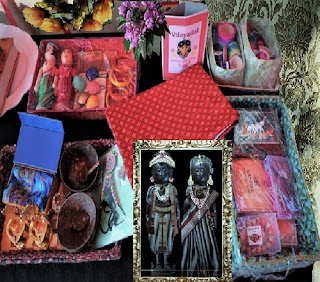 The Baraat in the evening transported us to a totally new dream world ! The procession was lead by music and dance , lights and gaiety. The Groom dressed in glittering Sherwani , turban and pearls with a sword tucked in his belt , looked like a Prince from far away historic times ! The bride was no less than an angel , adorned with a  gorgeous Lehenga , exotic jewellery and above all a priceless smile !

Finally with Fire God as witness and the full moon smiling from above , Saath Phere / Saptapadi - the most important ritual in a Hindu wedding which seals the wedding bond between the bride and the groom , was conducted !

The memories of the royal wedding celebrated in a dream land still lingers in my mind 💖!

The following text about Vilayaadal and Vilayaadal Saamaan is from the notes read out to the bride by the little girls in the family.

Vilayaadal is a Tamil word literally meaning 'playing'. It is a fun filled social event which originated in olden times when children were married off at a very young age , the bride often younger than ten . Vilayaadal ritual was meant to serve as an ice breaker for the young couple as well as for their respective siblings. The child brides  were presented with dolls , play things , grooming kits , clothes and accessories by the groom's sisters . The newly married couple were also made to play variety of competitive games with relatives on both sides joining as cheer leaders . The participants were also encouraged to display their singing and dancing talents.

In modern times marrying couples are no longer little kids . But the Vilayaadal ritual is retained in traditional weddings for the sheer fun and joy it brings to the wedding festivities. Many modern brides find it amusing to receive Barbie Dolls and toys as Vilayaadal gifts !

Here is a brief account of the Vilayaadal Saamaan presented to welcome the lovely Mumbai bride to our Bengaluru family. The assortment of artifacts representing the customary Vilayaadal items are hand picked from the four Southern States on behalf of all the little girls of our family .

These dolls are hand carved , out of Red Sanders , a valuable wood found in Andhra Pradesh .The paste of the wood has healing properties and is valued in indigenous medical systems.

The Marappachi pair represents Lakshmi and Vishnu or Raja Rani and occupy pride of place in the Navaratri Dolls Display ( Golu in Tamil , Gombe Habba in Kannada , Bommala Koluvu in Telugu ) organized in South Indian homes.

An intricate handicraft of Karnataka , a state rich in forest wealth . Inlay work using various materials on rosewood base is a traditional craft perfected by the Gudigars ( artisans who carve wood ) of Karnataka . The craft was patronized by the Wodeyar Kings of Mysore Kingdom.

The elephant motif is very popular in the State and is seen in all possible arts and crafts . Karnataka is home to the largest population of Elephants in India.

Southern Karnataka is called Gandhada Gudi - The temple of Sandal Wood - as the forests are thick with Sandal Wood trees . Creating beautiful and fragrant artefacts out of the valuable wood is a traditional craft promoted by the former Kings and now by the Government of Karnataka.

Sandal wood bead malas and bracelets are choice pieces from our artisans.

The wooden toys and other articles made in Channapatna - THE TOY TOWN OF KARNATAKA - are G I Tagged. The products are hand turned , hand painted and finished with lacquer coating. They are light weight , and have a non toxic colouring. The craft was introduced in Channapatna 300 years ago and perfected with Japanese Techniques 100 years ago. The wood used is Ivory Wood , Cedar , Sycamore and Rubber Wood.

Toy Kitchen set made of wood are known as Choppu . Kitchen play sets are traditional toys gifted to little girls from times immemorial in all societies of the world.

Kerala the land of coconut palms has a long tradition of using all parts of this palm - called Kalpavriksham - without wasting even a twig. The hard shells of the nut make very good cups and utensils , found in all traditional homes along the South West Coast . In present times too eco friendly essentials are being made with more refined finishing.

The Soup Bowls with spoons are from the rural artisans near Palakkad in Kerala .

In India a lamp is regarded as a metaphor for Knowledge . No ritual is complete without lighting an oil lamp. Brass and Bronze lamps of high quality are produced in centuries old foundries of Swamimalai near Kumbakonam in Tamil Nadu . Kerala too has its own long tradition in casting Bronze lamps. In Karnataka , Nagamangala and Karkala have been traditional centers for metal casting by a process called Lost Wax Process.

Kuttuvilakku , Agal Vilakku , Paavai Vilakku , Koondu Vilakku , Kamakshi Vilakku are some of the traditional lamps cast in brass and bronze.

The name Mysore Silk has justly become a byword for high quality soft silk . The innovative yarn twisting procedure introduced in the Mysore Kingdom during the 20th century beat back the Silk that was being imported from China. Local weavers who had already adopted Silk Worm breeding and Silk Yarn spinning during the middle of 18th century were trained to create the iconic MYSORE SILK. Ramanagaram continues to be the bulk producer of Silk since then.

This is a commonly prepared give away Prasadam in and around Mysore region. It is given to visitors on all happy occasions as a symbol of sharing joy. Dry coconut ( Kobri) , Sugar ( Sakkre ) , Roasted gram and Cardamom are ground together into a coarse powder and given to the guests in small packets along with the customary Tamboolam ( Betel leaves , betel nuts and coconut ). 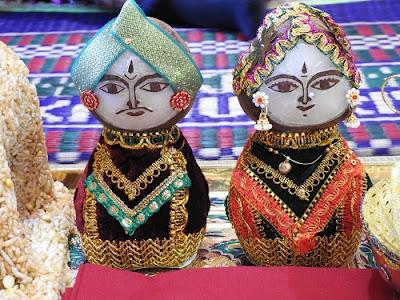 For weddings beautiful motifs are carved on whole Kobris or made into decorative Kobri dolls to represent the bride and the groom . Sugar dolls have a special place in this ensemble . The Nandi Idol moulded with Roasted gram and jaggery complete the use of all the auspicious ingredients for the happy occasion. 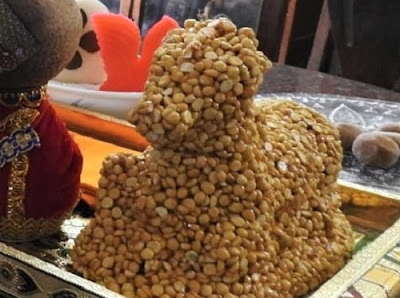 In olden days all traditional homes had skilled hands which were adept in making decorative Kobris and Sugar Dolls .  In modern times these beautiful edible artifacts are out sourced  along with other wedding Sweets.

Paruppu Tengai is a cone shaped traditional sweet which has a prominent place in South Indian Weddings . Boondi , Manoharam , Coconut Burfi , Sugar or jaggery coated Cashew nuts , Peanuts , Roasted gram are some of the sweets used in the making of Paruppu Tengais . Sometimes colourful Cadbury candies are also used in preparing the cones. Any prepared Sweet at the finishing stage is poured into greased conical moulds and are allowed to cool down . The pair of Sweet Cones are said to represent Shiva and Shakti . 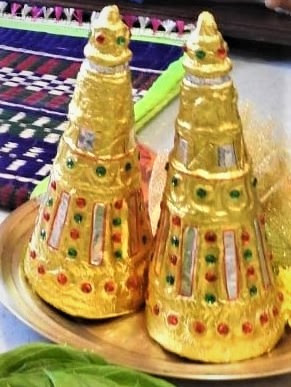 The colourfully decorated Paruppu Tengais occupy the central position among other Seer Bakshanams presented to the groom's party during the wedding rituals .

I conclude this post with lots of blessings to the newly weds , who gave us an opportunity for the inter cultural bonding of two families , which will last for ever . Thank you family for encouraging me to write this memoir ! Special thanks to my sister who always stands by me in all my endeavours .