When you read articles in Alzheimer’s disease journals about eating more berries to reduce cognitive decline in the elderly, the authors are talking about observational studies, like the Harvard Nurses’ Health Study that showed that berry intake appears to delay cognitive aging by up to two and a half years and the intake of nuts appears to delay brain aging by two years. These types of studies are just talking about associations, though, as I discuss in my video Best Brain Foods: Berries and Nuts Put to the Test.

Studies have found that, after trying to control for other lifestyle factors, berry eaters and nut eaters tend to have better brain function as they age, but you don’t know if it’s cause-and-effect…until you put it to the test. Thankfully, we now have “a growing number of human [interventional] studies” that have done just that. Randomized controlled trials have found that people who eat berries or nuts actually show improvements in cognitive performance, raising the “berry nutty” idea that “dietary supplementation with nuts, berry fruit, or both is capable of altering cognitive performance in humans, perhaps forestalling or reversing the effects of neurodegeneration in aging”—just with food.

For example, in a study on the effects of walnut consumption on cognitive performance, college students were split into groups, either eating walnuts for two months, followed by two months of placebo, or vice versa, and then they were switched. How do you make a placebo nut? The researchers gave the students banana bread with or without nuts—the same ingredients, just with or without walnuts. Those on the nuts showed a significant improvement in inference capacity, the ability to accurately draw conclusions from a set of facts—in other words, critical thinking. “On a practical level, maybe students or young professionals in…fields that involve a great deal of critical thinking or decision-making could possibly benefit and gain a slight advantage through regular consumption of walnuts.”

Another berry study randomized people to a smoothie made with blueberries, black currants, elderberries, lingonberries, strawberries, and…a tomato. Not only did their bad cholesterol drop about 10 points, but they also performed better on short-term memory tests. So, good for the heart, good for the brain. And, they were not just better on pencil-and-paper tests, but also in real-world applications. Give people Concord grape juice versus a fake grape Kool-Aid-type placebo, and you can get improved performance on everyday tasks, such as quicker response times in driving tests. Why not just give people Concord grapes instead of juice? It’s harder to create a placebo, and, of course, the study was paid for by Welch’s.

We talked about fruits and nuts. What about vegetables? “Consumers of cruciferous vegetables (cabbage, cauliflower, broccoli and Brussels sprouts) performed better in several cognitive tests than non-users.” And, in terms of cognitive decline with aging, women consuming the most leafy greens did better, effectively slowing brain aging by a year or two. This was the case not just with cruciferous vegetables, but also with other dark leafy greens, such as spinach, so it might be the nitrates.

As we age, our cerebral blood flow—the amount of blood flowing through our brain—drops, “which may be due to an age-related decrease in the production of NO,” nitric oxide, the “open sesame” molecule that dilates our blood vessels and is boosted by the consumption of nitrate-rich vegetables. “This reduction in blood flow to the brain has been indicated as a major risk factor for the impairment of cognitive function and development of neurodegenerative diseases, such as dementia.” We know nitrate-rich vegetables, such as leafy greens and beets, can improve physiological performance like beet juice does for athletes, but what about cognitive performance? We find out in my next video, Best Brain Foods: Greens and Beets Put to the Test. 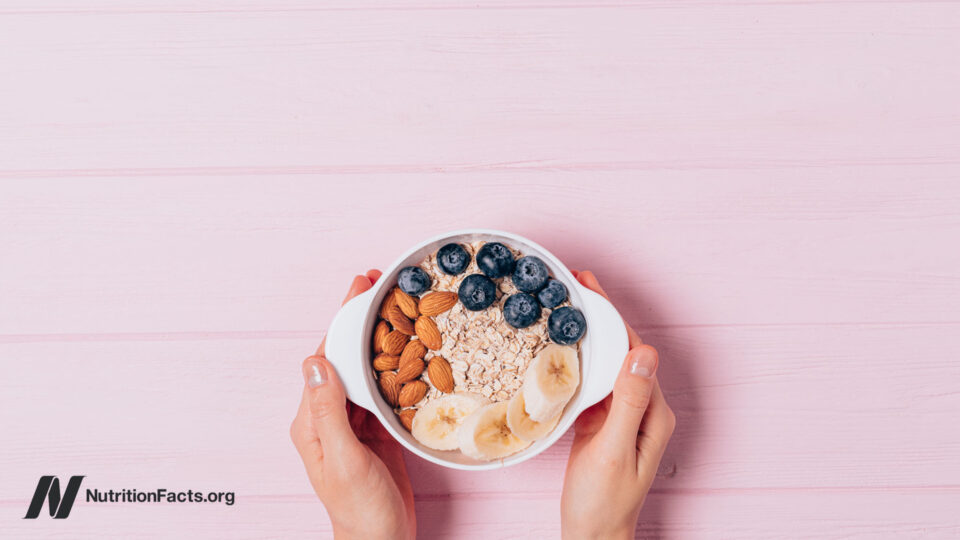