Ben Carson wants a piece of the Patriotic Education For The Youngs action, and what he's come up with for Little Patriots is...well, not awesome.
After he finished serving as Secretary of Housing and Urban Development under Trump. Carson created the American Cornerstone Institute, a sort of conservative thinky tank/advocacy group/instrument for pushing whatever thought is ambling through Carson's brain. It had a director of policy--Eric Blankenstein, who found then need to exit the Trump administration a bit earlier than Carson, but he appears to have exited in February. Otherwise, it's not clear that ACI is anything other than Ben Carson.
Cornerstone touts this goal:
Guided by our cornerstones of faith, liberty, community, and life, we will strengthen the bonds that hold our country together by promoting conservative, commonsense solutions to the issues facing our society.
"We will create unity by selling our team's view" seems a bit counterintuitive, but in talking about ACI Carson has generally emphasized unity and peaceful communication. As with his years with the previous administration, Carson doesn't seem to quite get where all this divisiveness might be coming from, but give him credit--his message is not "We have to obliterate those evil bad guys on the other side." For a conservative in 2022, that's something.
Incidentally, if it seems as if "cornerstone" isn't a more common part of political rhetoric in this country, that may be because one of the better-known historical "cornerstones" is the Cornerstone Address, in which Alexander Stephens, Vice-President of the Confederacy, explained that the cornerstone of the new nation rests "upon the great truth that the negro is not equal to the white man; that slavery—subordination to the superior race—is his natural and normal condition. This, our new government, is the first, in the history of the world, based upon this great physical, philosophical, and moral truth."
It's a curious oversight on Carson's part, particularly since one of the things he/ACI wants to do is teach children history.
Whipping up patriotic instructional stuff has become a staple of the right, and Carson's entry that three-legged race is Little Patriots.
The program appears aimed at grades K-5, and it emphasizes the four "cornerstones" in the quote above. It involves some fairly thin lessons and activities (from the K unit on Discovering America, "Have you ever wanted to find something new? You too might be an explorer.")
But the big central feature appears to be a series of animated episodes of Star Spangled Adventures. It looks like there are supposed to be 25 eventually; right now there are 4.
The production crew for these episodes is not a bunch of amateurs. Producer/director Robert F. Arvin has done work in Hollywood on movies and TV shows you've probably watched, from Inspector Gadget to JAG to Shanghai Noon as a digital artist, working mostly on pre-visualizations. Writer Jeff Holder has worked in mainstream kids media as a writer and VP of development at Hanna-Barbera. Songs are by Bradley Skistimas whose most recent claim to fame is getting his defamatory song about Dr, Fauci taken down by Youtube. Main voiced actor Cheryl Felicia Rhoads has worked professionally for a long time.
So these are people who are pros, and yet somehow, their finished product is not great. Consider Episode Four about the Declaration.
Open with the theme, which sounds kind of like a C&W singer doing a John Wayne imitation. "So come on all you patriots, let's go."
The animation for these pieces is bobbleheaded and flat, like cut scenes from a 90s-vintage video game. And although animation allows us to go anywhere and see anything, most of this episode is set in a room with Thomas Jefferson sitting at a table (while his wife cleans up, serves guests drinks, and says encouraging things). 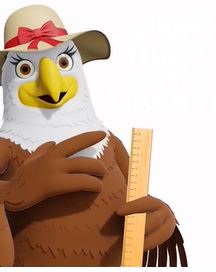 The host for the series is Liberty, a giant eagle in a tri-corner hat, voiced by Rhoads as a sort of discount Angela Lansbury. The video underlines a theme that tensions and conflicts have been getting worse, and the only cause hinted at is King George's tyrannical belief in his divine right to rule. Jefferson is mad at that "plundering tyrant," all of which seems aimed at making it seem as if England is vastly different from the US and has no idea of representative government, no such thing as Parliament, etc. Nor has anything like the French and Indian War ever occurred, creating the debts at the heart of the taxation debate. You can say that's all too complicated for the K-5 crowd, and I don't disagree, but what you choose to include or leave out when you simplify tells us a lot about your message, and the message the  here is that the Revolutionary War was caused by a monarch mistakenly believing in a God-given right to rule when in fact only we understood what God really meant.
Writer Jeff Holder has a career in children's television, really, so I'm thrown by lines like reference to Thomas Paine's "salient points" or "yes, his discourse on role of government is brilliant" and "the magnitude of what we are saying is staggering."  There's a background jazzy score that just loops away without responding to what's happening, not even when we get to the "life, liberty and the pursuit of happiness" part that is a focus of the episode.  And then the eagle says "The world's may be old fashioned, but what they mean are timeless." And yes, that's a subject-verb agreement error. And before someone points it out, yes, I know it takes a good ten seconds to find an error within the confines of this blog, but I'm not a paid professional who has been typing for a living for decades.
We take a moment to explain that "all men" back then meant "all humanity" which...okay. And we are heavy on the God-given part. Also, leaning on "those who are governed are over those who govern."
After Congress deliberates, we get a song that rhymes "get it done" with "independence." Then we get a scene of King George being hacked off about the Declaration while the eagle whispers incomprehensible pieces of it in his ear and he rants (and happy jazzy piano plays), because I guess doing something doesn't really count unless it upsets someone else.
The eagle tells us that Jefferson always regretted that the Congress cut the part about slavery. But Congress thought it would cause more arguments, which is a clever way of skating past the fact that members of Congress were the ones arguing. But one theme of this series is the idea that the Founders were a united body, and not a bunch of squabbling men who had major disagreements about just about everything. This matters, because there's a huge difference between understanding ourselves as a nation founded on disagreement and compromise and understanding ourselves as a nation founded on one single inviolable Truth shared by unified founders. But Little Patriots leans on the second version all the way. Of course, the eagle does not mention that Jefferson kept human beings enslaved even as he called slavery an abomination. I don't care how young a person is--you are never too young to understand that people are complicated.
You'd better off showing the musical 1776.
There are some short slide-show style videos that are actually more watchable. There are also a couple of books that Carson co-authors with Valerie Pfundstein and which emphasize things like the Judeo-Christian values of our founding.
Through lessons and cartoons rooted in our American history, the Little Patriots Program focuses on America’s four founding pillars: faith, liberty, community, and life, and celebrates all the values that make our country exceptional.
The whole program favors a simplistic view of our history anchored in religious faith and national exceptionalism and the awesomeness of entrepreneurial marketeering, with a few head nods to little corrections we made along the way (Jackie Robinson integrates baseball, and MLK Jr. leads some marches and says that character thing). There's a bibliography (the Kindergarten lessons are sourced mostly from the Brittanica online version). There is, at least, no apparent signs of the sort of "And then dirty socialists tried to undermine the work of our Founders" that other patriotic history curriculum are fond of.
Not to mention irony, as when another video about liberty explains that it means "to follow a new and perhaps different path than others before you." As long as, you know, it's an acceptable right kind of different path.
I don't think Little Patriots is going to fix the nation. It may pad out the work for the private schools, homeschoolers, and grandparents that it's aimed at, but I can't imagine it benefiting actual children. Pass on this.