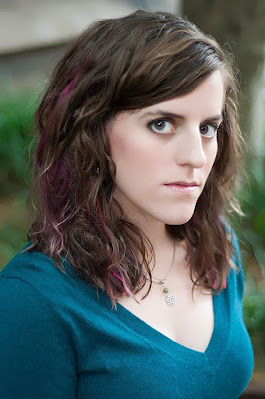 Claire Legrand used to be a musician until she realized she couldn’t stop thinking about the stories in her head. Now she is a librarian and New York Times bestselling author living in New Jersey.
Her first novel is The Cavendish Home for Boys and Girls, one of the New York Public Library’s 100 Titles for Reading and Sharing in 2012. She is also the author of The Year of Shadows, a ghost story for middle grade readers; and Winterspell, a young adult re-telling of The Nutcracker. Some Kind of Happiness, her middle grade novel about mental illness, family secrets, and the power of storytelling, is a 2017 Edgar Award Nominee. Claire’s latest middle grade novel, Thornlight, is a classic fantasy-adventure and a companion novel to the acclaimed Foxheart, a 2016 Junior Library Guild selection. She is one of the four authors behind The Cabinet of Curiosities, an anthology of dark middle grade short fiction that was a Junior Library Guild selection, a Bank Street Best Book, and among the New York Public Library’s 100 Titles for Reading and Sharing in 2014.
Her young adult horror novel, Sawkill Girls, received five starred reviews. It is also a 2018 Bram Stoker Award finalist and a 2019 Lambda Literary Award finalist.
Furyborn, an epic fantasy novel for young adults, debuted at #4 on the New York Times bestseller list, and is the first book in the Empirium Trilogy. The next book in the series, Kingsbane, was also an instant New York Times bestseller. The final book in the series, Lightbringer, released October 13, 2020.
WEBSITE | GOODREADS 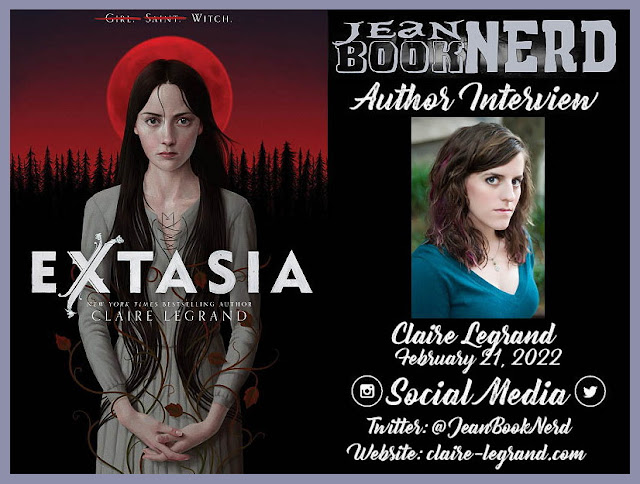 The underland, some called it. The great city, said others.

She traveled with three companions. A girl with an aching head. A girl with a tired heart. A girl who feared all she saw. And at the end of the road stood a great black door wedged into the side of a hill.

The girl with the tired heart tried the same, but beyond the door was a vast forest so thick they could not press inside it. She too closed the door.

The girl who feared all she saw would not open the door set into the hill.

They begged her to try, but she did not. She sat on the ground and wept, for she knew all their walking had been in vain, that they would never reach the underland.

Then the final girl, the lost girl, opened the door. And beyond it was only more road, and on the far horizon, a speck of darkness that she knew was another door, standing in wait. The girls joined hands and began again.

Meet the Characters
The main character in Extasia is Amity Barrow, who at the beginning of the book is anointed a saint by the elders of her village, the entire population of which is white and devoutly religious. Sainthood is a ceremonial position that is not as nice as it sounds, though stoic, plain Amity has been yearning to be anointed for years. Three other girls in the village are Amity’s closest friends and allies—her younger sister, Blessing, the golden-haired beauty of the family; another saint, red-headed Mercy, who’s constantly snapping with barely restrained anger; and odd, ethereal Saint Silence, ghostly pale with white hair, who holds an important clue in her scattered, dreamy mind and by whom Amity is utterly fascinated.
Your Journey to Publication
When I was in college and changed my major to focus on writing instead of music, I had no idea how difficult it would be to get published. Like a lot of young writers, I was wildly confident in my own abilities and in the appeal of my story—which isn’t a bad thing! You need a bit of ego to push you through the hard work of creating, editing, and selling a book. But the story I was writing was big—too big for a young writer just starting out—and, unsurprisingly, it was therefore a huge mess. While querying agents over the years, I received dozens upon dozens of rejections and eventually had to face reality: this book wasn’t ready, and I needed to put it aside, no matter how heartbreaking that would be. So I did, and I wrote another book that actually got me an agent and a book deal. I kept writing and learning and selling other books—books I’m proud of, books I truly love—but I never forgot that first idea, that huge story that brought me back to my childhood love of writing. I kept going back to it, rethinking it, rewriting it, and finally, twelve years after I first dreamed up the original idea, I sold the book—Furyborn—to an incredibly supportive team at my publisher, Sourcebooks. Two years after that, they published Furyborn, and it became a New York Times bestseller. Two years after that, the third book in the trilogy, Lightbringer, hit the shelves. Sixteen years from inception to completion. A long time, but, hey, life is weird, and publication journeys are even weirder. The moral of this story is, as ever: don’t give up. Create art you’re passionate about, art you can’t stop thinking about, art that scares you and pushes you and lights up your brain. Art like that can change your life.
Writing Behind the Scenes
As a former musician, music has always been and will always be a huge part of my creative process. I make playlists for all of my books, focusing primarily on instrumental film scores. These playlists help me in all kinds of ways—they help me establish the rhythm of a scene or chapter; they help me get into the proper mood for whatever I’m working on that day; and they provide inspiration when I can’t figure out where to go next. I’ve shared a few tracks from my Extasia playlist on Spotify, and the full playlist will be available once the book is out. You can also find playlists for my other published books, and stay updated with playlists for upcoming books, by following me on Spotify.
What is the first job you have had?
A part-time shelver at my local public library.
Best date you've ever had? This wasn’t a romantic date, but a friend date: instead of attending my senior prom, I went to a Texas Rangers baseball game with a big group of friends. That was such a fun night, replete with killer nachos that I’m positive were sadly unavailable at the prom venue.
What is the first thing you think of when you wake up in the morning? Food. I’m always really hungry right when I wake up.
What is your most memorable travel experience?
A trip to Washington, D.C. with my family the summer after I graduated from high school—mainly because, on the flight home from that trip, I came up with the idea for the Empirium Trilogy.
Which would you choose, true love with a guarantee of a heart break or have never loved before? True love with a guarantee of heartbreak, 100%. I am a firm believer in the whole “better to have loved and lost…” thing.
When you looked in the mirror first thing this morning, what was the first thing you thought?
Wow, my hair is wild. I look like a Who from Whoville.
What do you usually think about right before falling asleep?
I usually fall asleep while thinking through a meditative exercise that helps quiet my brain and settle any lingering tension from the day.
First Love?
A lovely, nerdy, sweetheart of a boy named Kevin—my on-again, off-again boyfriend from kindergarten through fifth grade.
Most horrifying dream you have ever had?
As a kid, I was terrified of my extremely intense dance teacher, Miss Karen, and once had a nightmare in which she chased me with a huge knife, this awful, manic smile on her face. Why do our brains do this to us?!
What event in your life would make a good movie?
I will forever remain firmly convinced that my experiences working at a public library would make a fantastic, The Office-esque show or movie. You’d perhaps think libraries would be places of calm, reason, and good behavior—and, well, you would be wrong.
What is one unique thing you are afraid of?
Refrigerator smells. They make me feel panicky and gag. I love leftovers, but I hold my breath while unboxing them and warming them up. 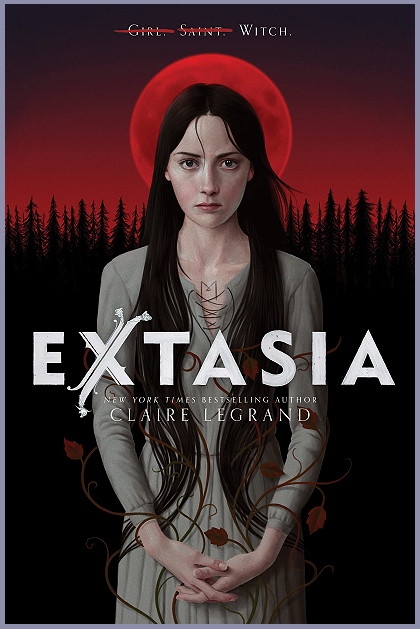 From New York Times bestselling author Claire Legrand comes a new, bone-chilling YA horror novel about a girl who joins a coven to root out a vicious evil that's stalking her village. Perfect for fans of The Handmaid's Tale and The Grace Year.

Her name is unimportant.

All you must know is that today she will become one of the four saints of Haven. The elders will mark her and place the red hood on her head. With her sisters, she will stand against the evil power that lives beneath the black mountain--an evil which has already killed nine of her village's men.

She will tell no one of the white-eyed beasts that follow her. Or the faceless gray women tall as houses. Or the girls she saw kissing in the elm grove.

Today she will be a saint of Haven. She will rid her family of her mother's shame at last and save her people from destruction. She is not afraid. Are you?

This searing and lyrically written novel by the critically acclaimed author of Sawkill Girls beckons readers to follow its fierce heroine into a world filled with secrets and blood--where the truth is buried in lies and a devastating power waits, seething, for someone brave enough to use it.
You can purchase Extasia at the following Retailers:

And now, The Giveaways.
Thank you CLAIRE LEGRAND for making this giveaway possible. 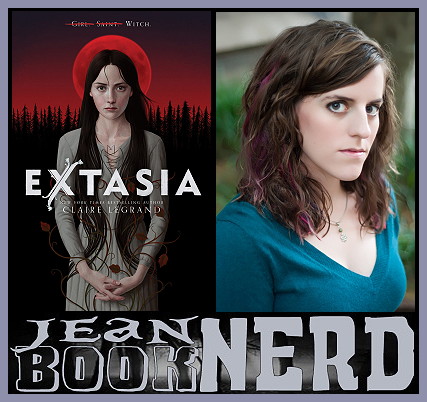 1 Winner will receive a Copy of Extasia by Claire Legrand.