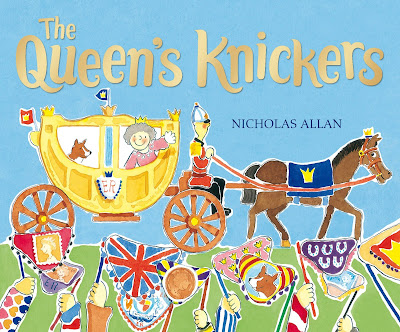 Oh my, the cheek of it! In both cases, these books used to cause a cacophony of giggles with little miss  and very quickly became oft-demanded faves for bedtime reading.

The sheer irreverence of "The Queen's Knickers" and the deliriously brilliant storyline - of Her Maj going through a day in the life of carefully choosing her undercrackers to suit particular occasions, and one little girl's whispered reassurances to the monarch when she's feeling slightly uncomfortable are just the stuff that kids can't get enough of.

For some reason though, it wasn't the knicker-based shenanigans in this book that used to make C giggle the most. It was the mere mention of the Queen's long-suffering maid Dylis, charged with the duty of ensuring that the queen's pants were packed properly before tootling off on royal assignments. Absolutely loved this one. 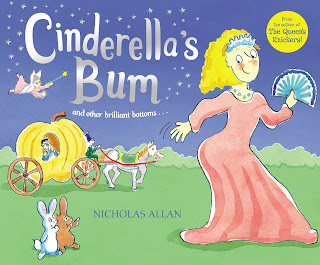 Likewise, "Cinderella's Bum" gives fairy tales the same treatment, with the story of a young girl feeling slightly concerned about the size of her bum in her swimming costume.

It seems that Cinderella was also once concerned about the size of her derriere so the girl's younger sibling tries to make her older sis feel better with a bum-based variation on the classic story, before older sis actually realises that the reason she can't squeeze into her favourite swimming cossie is that she's put the wrong one on, and is actually trying to squeeze her bum into the younger sib's cossie instead!

Cheeky as hell with such a fantastic set-up, this is Nicholas' trademark and though we never got round to reading "Santa Claus Needs a Wee" we feel that one of these days we're going to have to go track that one down too. Brilliant, brilliant stuff both!