This quinoa breakfast bake is mixed with molasses, spices, sweet bananas and baked for a healthy, make-ahead gluten free and vegan friendly breakfast! 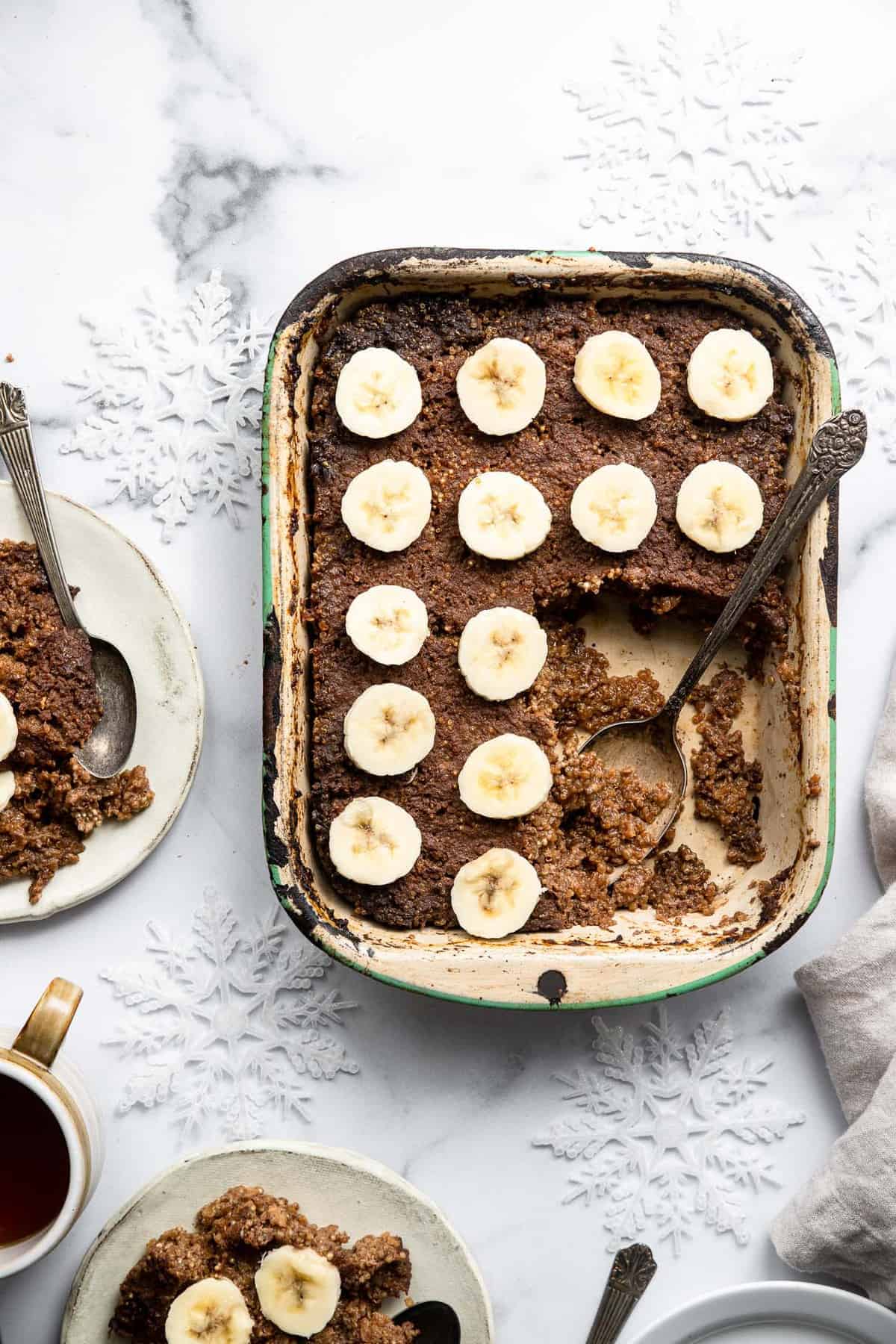 Quinoa for breakfast! YES I am going there!

Weve had breakfast quinoa chia pudding and pumpkin breakfast quinoa, so why not take it up a notch and make a big old casserole dish of cozy, chewy quinoa that is laced with the spicy-sweet taste of the holidays?

YEP. You are going to want to wake up on Christmas morning tho this!

You may have noticed theres a bit of a Quinoa craze going on right now, and let me tell you, its for a very good reason. Quinoa is EVERYWHERE these days; its often found in salads, shakes, granola bars and can be a great substitute for pasta, rice and other grains in many of your favorite dishes! This superfood is a gluten-free seed that is a whole grain carbohydrate AND a whole protein too (meaning that it contains all 9 essential amino acids). On top of all of its nourishing goodness, quinoa is so versatile and incredible delicious. MIND. BLOWN. Its no wonder its all the rage, and has been for years! 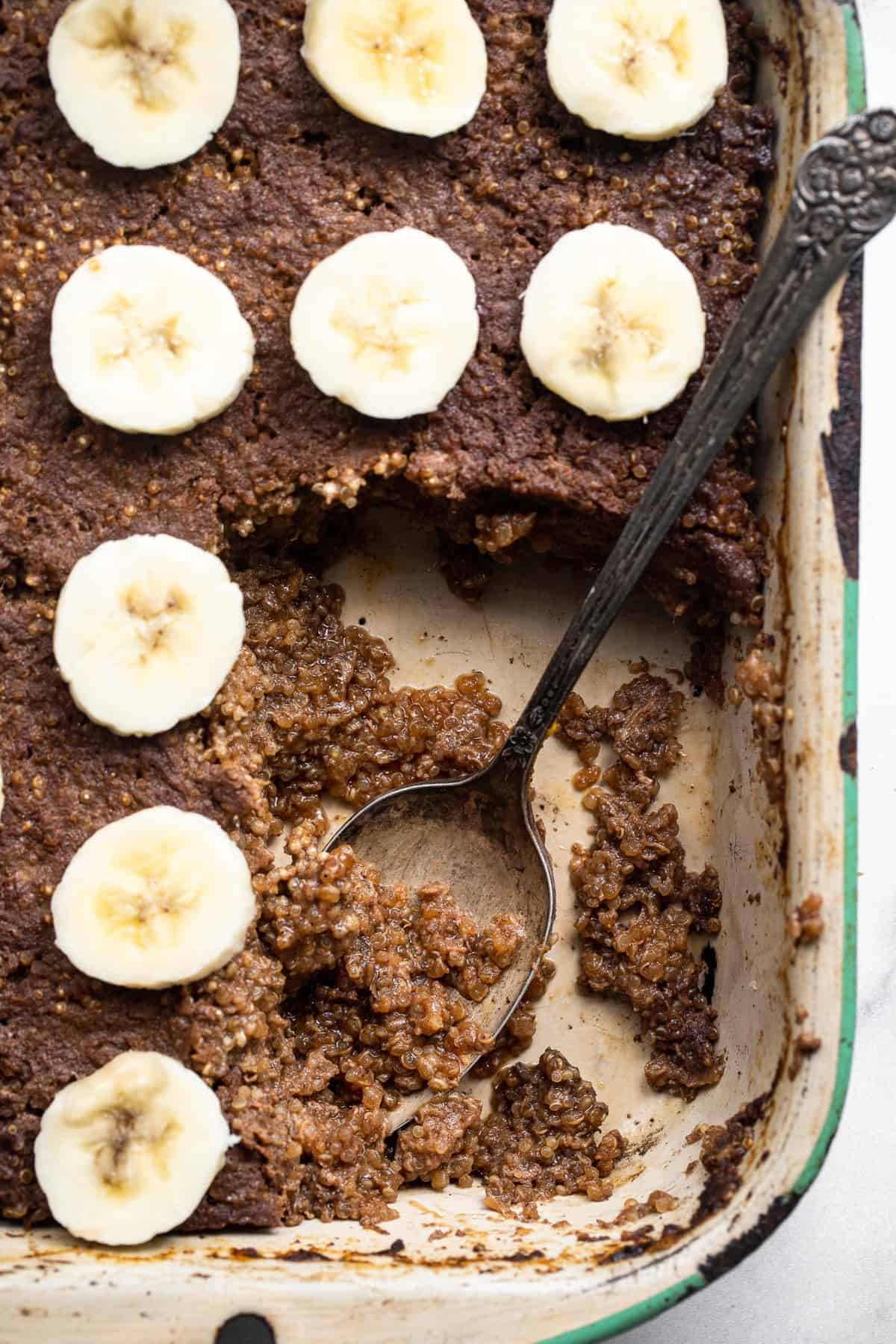 Since there the ways to enjoy quinoa are endless, Im going to show you a creative and delicious way to incorporate it into the first meal of the day. Thats right, were taking the classic baked oatmeal and putting a fun spin on it by using quinoa and dressing it up a bit by adding some warm spices and rich flavors so that it really hits the spot. For this quinoa bake recipe, you will need:

How to Make Quinoa Breakfast Bake

WOW, Am I the only one who is hungry already? These ingredients are going to come together in the coziest, most satisfying fall or winter breakfast. Youre seriously going to LOVE this, so lets get started:

In a large casserole dish, add the banana, molasses, maple syrup, cinnamon, vanilla extract, cloves, ginger, allspice and salt. Stir until well mixed. Next, add in the quinoa and stir until well distributed in your mixture. Next, whisk in the almond milk to combine.

Your mixture will need to rest overnight, so cover it with some saran wrap and put it in the fridge.

The next morning, preheat your oven to 350 degrees. Grab your casserole dish out of the fridge and uncover your mixture- youll need to stir it around a bit to make sure the quinoa hasnt settled to the bottom of your dish. Cover pan with tinfoil and bake until all the liquid is absorbed and the top of the quinoa is set. This should take approximately 1 hour to 1 hour and 15 minutes.

Turn the oven on high broil and uncover the pan. Sprinkle the sliced almonds over the quinoa and gently press them in. Broil just until the almonds turn golden brown, which should take about 2-4 minutes. They will burn quickly so be sure to watch! 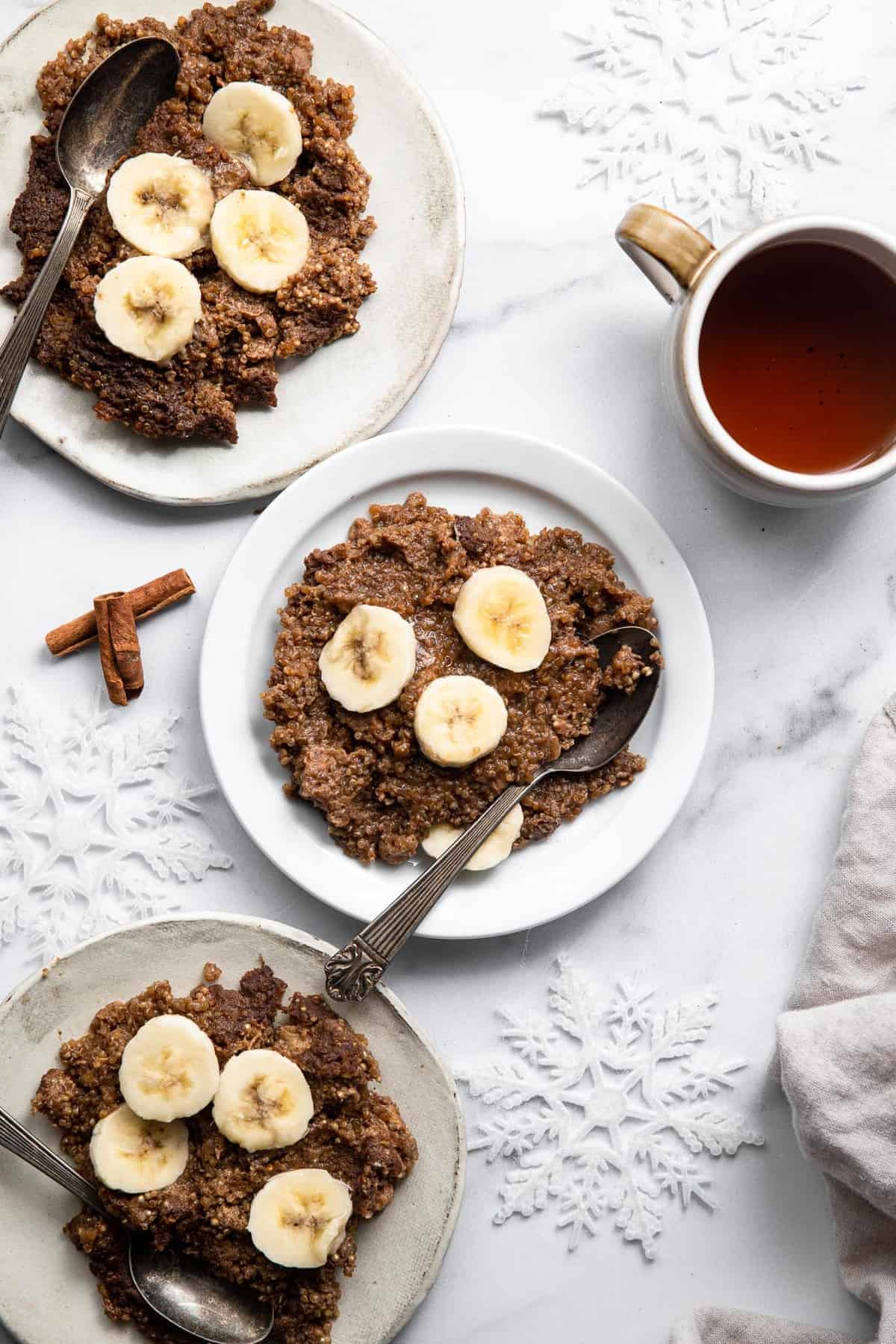 Let cool for about 10 minutes, then cut into squares and DEVOUR!

What to serve with Quinoa for breakfast

Scrambled or poached eggs pair well with Quinoa breakfast recipes like this one, as well as pork breakfast sausage or bacon. Another way to get in a protein-packed breakfast to start the day is with delicious egg muffins. Two of my favorites are:

How to Store Cooked Quinoa

If youve got leftover cooked quinoa, it can be stored in shallow, sealed containers in the fridge for 3-5 days.

BOOM, just like that youve got a festive breakfast that is loaded with protein and fiber to keep you full <3 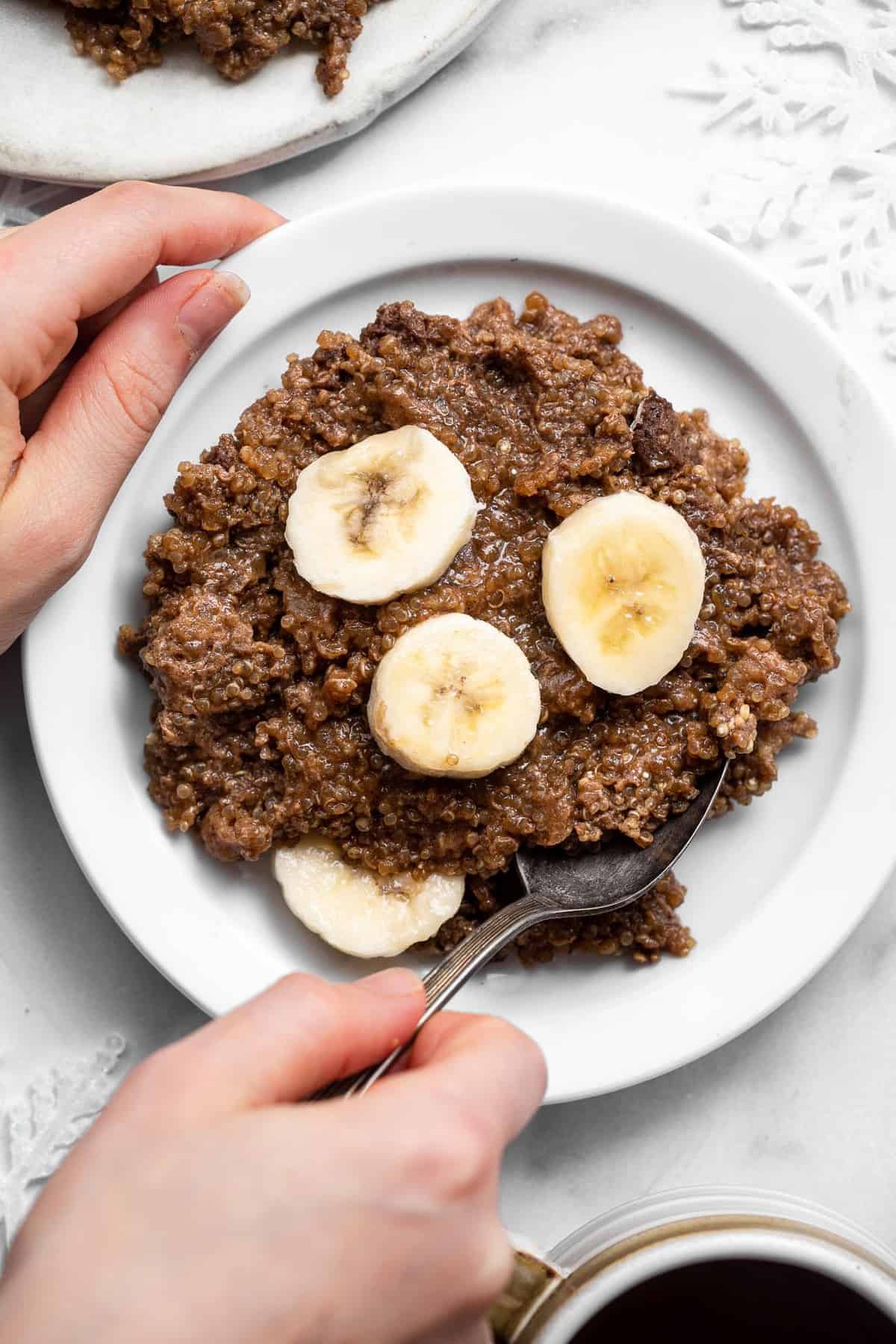 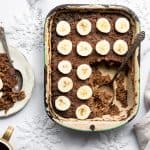 This quinoa breakfast bake is mixed with molasses, spices, sweet bananas and baked for a healthy, make-ahead gluten free and vegan friendly breakfast!

FOR THIS RECIPE, I RECOMMEND:

This post may contain affiliate links, but I only recommend products that I actually use and <3. Thanks for supporting FFF!