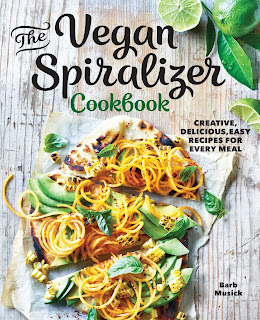 My internet friend Barb of That Was Vegan? has a new cookbook! Y'all, this woman is ON FIRE. She's put out two cookbooks in less than a year. It took me five years to put together my first (and only) cookbook. Ha!!

I loved her last book, The Complete Vegan Instant Pot, is amazing. I borrowed my parents' instant pot to try a few recipes, and now I'm convinced I need my own. And now Barb has rolled out The Vegan Spiralizer Cookbook, which is filled with ways to use vegetable (and fruit!) ribbons, spirals, and shoestrings in your cooking. I have a spiralizer that doesn't see nearly enough use, so I was excited to break it out and try some of her recipes.

The first dish I tried was the Maple Sriracha Tempeh Bowl, a hash made with spiralized sweet and white potato and topped with spicy-sweet tempeh and sauteed kale. You fry the potato spirals and they cook down to a tender, crisp hash. The tempeh on top, which is marinated in maple and hot sauce, was so yummy that it barely made it to the bowl (I kept snacking on it from the skillet!). 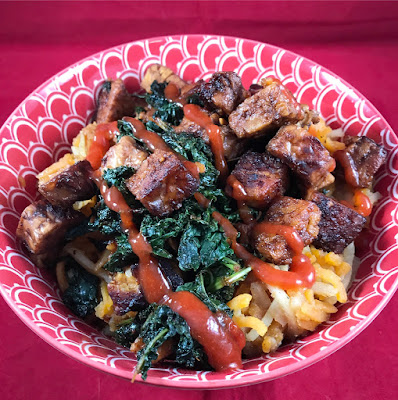 Next up, I tried the Crispy Tofu Ramen on a particularly cold evening. 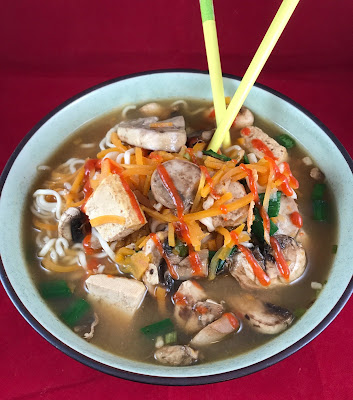 Ramen noodles (I used the Koyo baked ramen) are combined sweet potato noodles, mushrooms, and savory-sweet hoisin-coated tofu for this satisfying bowl. The recipe called for veggie broth, but I used the seasoning packets from my ramen (mixed with water) instead. Fresh miso adds to the broth flavor as well.

Y'all, I consider myself a ramen expert. It is my favorite food, after all. And this ramen bowl was top-notch!

I used to think spiralizers were only good for raw zoodles (remember that craze?!), but Barb shows us that you can do so much more with spiral shapes. She uses spiralized apples in her Banana Apple Bread, spiralized plantains in her Black Bean Soup, and spiralized butternut squash in her Cheesy Barbecue Collard Wraps. There's even a drink section with spiralized cucumber mojitos and spiralized mango habanero selzter!

Show your spiralizer some love and GET THIS BOOK!