The Human Rights Campaign, the largest LGBT advocacy group in the United States, has stripped Fox News of its perfect rating on the Corporate Equality Index and its status as one of the "best places to work for LGBTQ equality," CNN reported Friday.

According to Business Insider, the HRC dropped Fox's score from 100 to 75 due to its coverage of the Florida education bill critics have labeled the "Don't Say Gay" bill.

The bill, which Gov. Ron DeSantis (R) signed into law on Monday, prohibits classroom instruction on sexual orientation and gender identity in kindergarten through third grade. Earlier this week, Fox News host Tucker Carlson said opponents of the bill "have a sexual agenda for six-year-old children" which he said "sounds like the behavior of a sex offender."

The HRC fired back on Friday. "We can no longer allow Fox Corporation to maintain its score if Fox News personalities and contributors continue to deny the existence of transgender people, minimize the violence transgender individuals face, refer to parents of LGBTQ+ youth as perverts, or equate leaders of LGBTQ+ diversity and inclusions efforts with sex offenders," HRC press secretary Aryn Fields told Deadline.

"At FOX, we celebrate our diverse workforce, and remain committed to LGBTQ+ equality and inclusion. We've established inclusive policies and practices with a focus on our recruiting, hiring, and training efforts as well as providing equitable healthcare and other benefits," said Fox Corporation Executive Vice President of Human Resources Kevin Lord in a press release.

The Corporate Equality Index rates companies based on their non-discrimination policies for sexual orientation and gender identity, their organizational culture, and the inclusivity of their benefits packages. 15 of the top 20 companies in the Fortune 500 received 100 percent ratings in 2022. 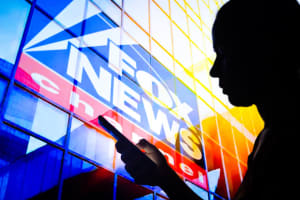