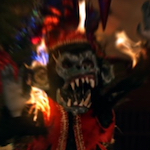 TOYS OF TERROR is a 2020 Christmas horror movie that’s exactly what it sounds like – a movie about toys coming to life and doing evil toy shit. It seems to have premiered on SyFy, and it’s on DVD and VOD. The director is someone named Nicholas Verso (BOYS IN THE TREES) and it’s written and executive produced by Dana Gould, the comedian, Simpsons writer and podcaster. I had no idea when I rented it that anyone notable was involved, and I respect that Gould seems to have just wanted to make a straightforward, non-parody Full Moon type movie. But it comes from the dystopically named “Blue Ribbon Content” division of Warner Bros. Television, responsible for some DC Comics web animation plus the DTV movies DAPHNE & VELMA and THE BANANA SPLITS MOVIE, and has better craft and production value than many of the actual Full Moon movies, especially the later ones.

It’s the story of a family coming to stay at a former children’s home that they plan to refurbish into a mansion and flip. (Same set up as The Haunting of Hill House.) It’s implied to be somewhere in Washington state, but it’s filmed in Canada – as usual, and as indicated by a cast full of actors you know are Canadian because of how many Hallmark Christmas movies they’re in.

Stepmother Hannah (Kyana Teresa, CHRISTMAS CATCH, DOUBLE HOLIDAY, THE CHRISTMAS TEMP, THE ENCHANTED CHRISTMAS CAKE, MIRACLE IN MOTOR CITY, A SISTERLY CHRISTMAS, CHRISTMAS ON MISTLETOE LAKE, A GINGERBREAD CHRISTMAS) brings them all there without mentioning that “some weird shit happened here a long time ago.” In her defense, she doesn’t know the specific weird shit that happened – a woman whose son the hospital couldn’t save dropped off a trunk of cursed toys on Christmas Eve and everybody was dead the next morning – she just knows that nobody else would buy the place. But she’s withholding information. 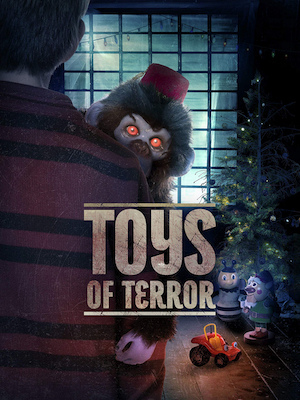 Despite that ethical lapse, and the Hallmark cliche of taking too many business calls as shorthand for workaholism, Hannah is reasonably likable. Her husband David (Dayo Ade, JUNGLEGROUND) keeps the peace with sullen teen daughter Alicia (Verity Marks, THE CHRISTMAS CLUB), who wishes she was in Bora Bora with her mom. Nobody believes Alicia that she saw a toy appear out of nowhere in a previously empty room, and they placate her with an old school video game called Survive or Don’t.

Meanwhile, the younger kids Franklin (Saul Elias, CHRISTMAS BY STARLIGHT) and Zoe (Zoe Fish, A DREAM OF CHRISTMAS, SNOWED-INN CHRISTMAS, ALWAYS AND FOREVER CHRISTMAS, THE CHRISTMAS CLUB, AMAZING WINTER ROMANCE, ON THE 12THE DATE OF CHRISTMAS, the 2020 edition of THE GRUDGE) find a bunch of toys and maybe literally fall under their spell. Like Andy with Chucky, they seem to think it’s reasonable that the toys come to life and talk to them.

The story is mostly what you expect, with an occasional laugh or surprise. But what makes this a genuine treat is how much care is put into the toys of terror. It bugs me when kids in movies flip for fictional toys that are just ugly or cheap looking, and that’s pretty standard in low budget horror. For example in my review of another Christmas-set killer toy movie, PUPPET MASTER VS. DEMONIC TOYS, I wrote, “It bothers me that this supposed top toy company makes a ladybug ’toy’ that looks like a middle school wood shop project… I hate in movies when they have a company that’s supposed to be huge but the logos and products look like amateur home made garbage.”

Thankfully this is a movie that shows the others how it’s done. There are a bunch of effectively creepy background toys, and then most of the featured terrors are good riffs on toys of the ‘80s. There’s a He-Man type character with a dragon and they look like they could really come from some forgotten cartoon. There’s a bumblebee clearly inspired by the Glo Worms and her name is “Bee Sharp.” There’s a “Santa’s Elf” who looks pretty Rankin-Bass inspired, an off brand See ‘n Say that sees and says evil things, and a remote control dune buggy that scares the adults by going off a jump and crashing through the stained-glass window in the attic. 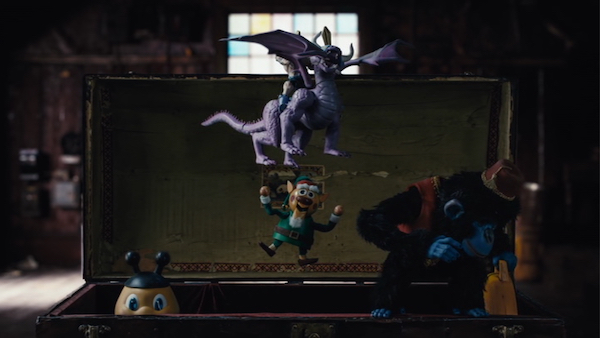 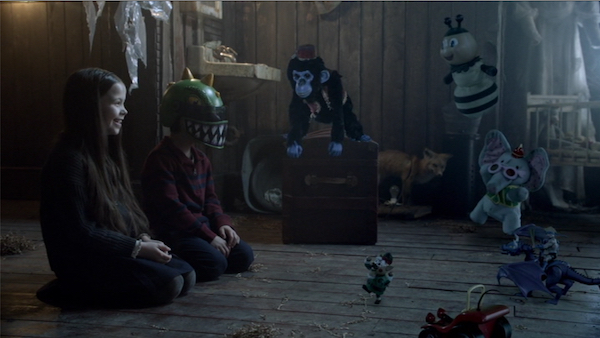 Admittedly “Uncle Monkey” (a monkey in a fez in vest) is too generic to be the once-popular character he’s purported to be, but they make up for that with some very good cartoony character animation. And also a part where he gets thrown into the fireplace and then runs around in flames, catching presents and the tree on fire, and melting into a scarier form. 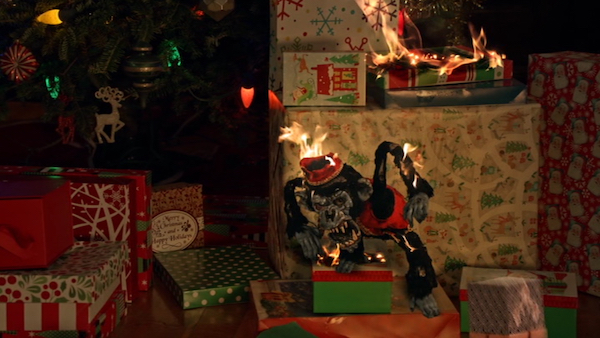 The scare sequences are sincere, and there are non-toy terrors as well – strange voices, an apparition of a little boy, Franklin seemingly possessed when he puts on a voice-changing Reptar-type motorcycle helmet. As spiders appear in Alicia’s video game an actual one crawls into her bowl of popcorn, and suddenly she starts to choke. When the nanny, Rose (Georgia Waters, Siren, Reginald the Vampire) gives her the Heimlich I don’t think either of them notice it’s a still-alive-spider she coughs up.

Poor Rose, whose traumatic miscarriage is mocked by dreams of dolls with melted faces, starts to listen to Alicia about the toys after getting attacked by the dragon toy herself, but she pretends to think it was a bird when talking to the other adults.

I like the part where contractor Emmett (Ernie Pitts, THE CHRISTMAS HEART, A DREAM OF CHRISTMAS, NO TIME LIKE CHRISTMAS, ALWAYS AND FOREVER CHRISTMAS, THE CHRISTMAS CLUB, AMAZING WINTER ROMANCE) hears whimpers from the dangerously rickety third floor, follows them only to find Bee Sharp instead of the kids, and collapses through the floor, getting impaled on a long shard of floorboard. Alicia doesn’t hear any of it because she has headphones on playing the video game, in which her Emmett-like character is falling through a frozen lake. It’s the rare movie where they know not to pull the shard out, but to leave it in so he doesn’t bleed out. But when they saw it off he collapses all the way through the floor!

No problem. He’s still alive. Just barely. David courageously drags him to the car and tries to drive him through the snow to the hospital. This is some of the best executed dark humor in the movie: David misinterprets the sound of Emmett being smothered by Bee Sharp in the backseat and says, “That’s right, just keep breathing, buddy.” And you can’t help but smile at the absurd image of this particular doll, fluttering in stop motion, but in such a menacing context.

I enjoy the PUPPET MASTER puppets, but I like this different approach where they’re more cute, like something a child would actually play with, and they stay in their TOY STORY type cartoon personas even while trying to get the kids to jump out a window. They also have a musical number. Their most inspired bit of mischief is when they wake the kids up late on Christmas Eve pretending it’s Christmas morning, and get them to start opening their presents, while smashing the gifts for their parents and throwing ones they don’t like (such as a sweater) in the fireplace. I appreciate killer dolls that do more than just stab or bite. True professionals.

I’m also happy to say this is a Christmas horror that’s generous with the holiday content. Lots of snow, Christmas lights, some Christmas music, readings of “The Night Before Christmas,” decorating the tree, putting up stockings, writing letters to Santa, worrying about him knowing where to deliver the presents, welcoming Emmett to the family celebration when he gets snowed in with them. And then it takes it to the next level when the tree topper angel comes to life and wraps garlands and string lights around Hannah. Gould always has good Halloween and Christmas episodes of his podcast The Dana Gould Hour, so I should’ve known he’d know to go all out on that.

I don’t think TOYS OF TERROR will become a movie I want to watch every December like, say, DEADLY GAMES a.k.a. DIAL CODE SANTA CLAUS has. But it’s a well made DTV programmer with extra elbow grease in the crucial area of killer toy design and execution. Definitely way better than expected and recommended for those who, like me, yearn for fresh holiday horror at this time of year. Thanks, Santa!

The post Toys of Terror first appeared on VERN'S REVIEWS on the FILMS of CINEMA.