This list is the second installment of Movies Every Menswear Fan Should Watch, wherein we’ll cover movies from the 1970s to the modern era. If you haven’t yet, check out part one, where we covered vintage movies from the ’30s through the ’60s.

The movie series depicts the life of the Corleone mafia family — in particular, the patriarch Vito and his son Michael. Part I spans from 1945 to ’55, while Part II focuses on the early life of Vito in the early 1900s and on Michael in 1958. Both films feature a wide array of clothing, including military attire, Black Tie, suits, and various other outfits. 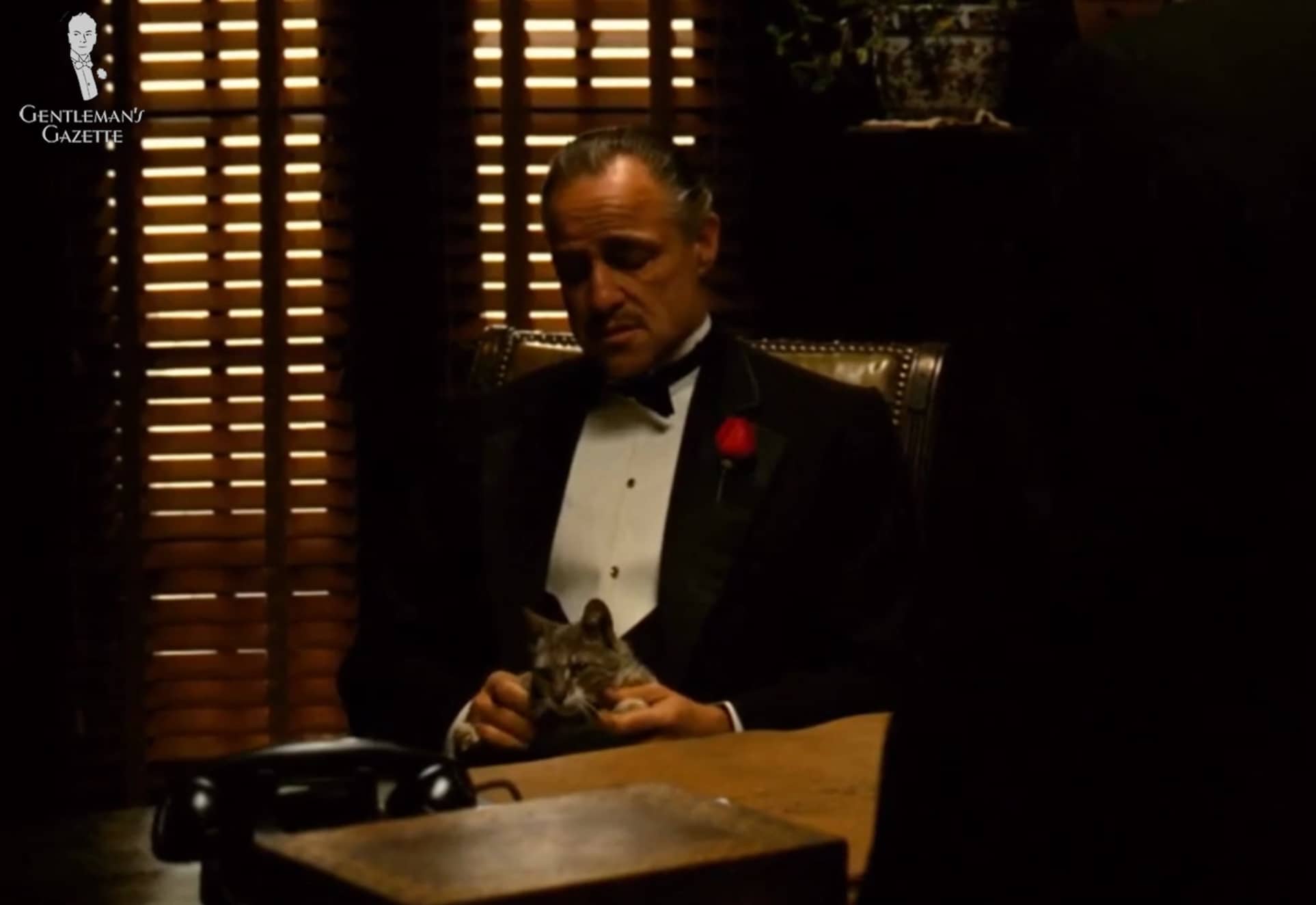 Of course, while some of the Mafiosi outfits can be more on the ostentatious side, people are well-dressed in general. And yes, we also recommend these movies for the plot–even though Part III (from the ’90s) may be a bit more questionable.

This movie features Paul Newman and Robert Redford. It is set in 1936 and as such, the period clothing is of interest to clotheshorses. The movie won seven Oscars out of ten nominations, and you can see the actors wearing black-tie outfits including detachable collars (which were period-accurate) and patterned suits. 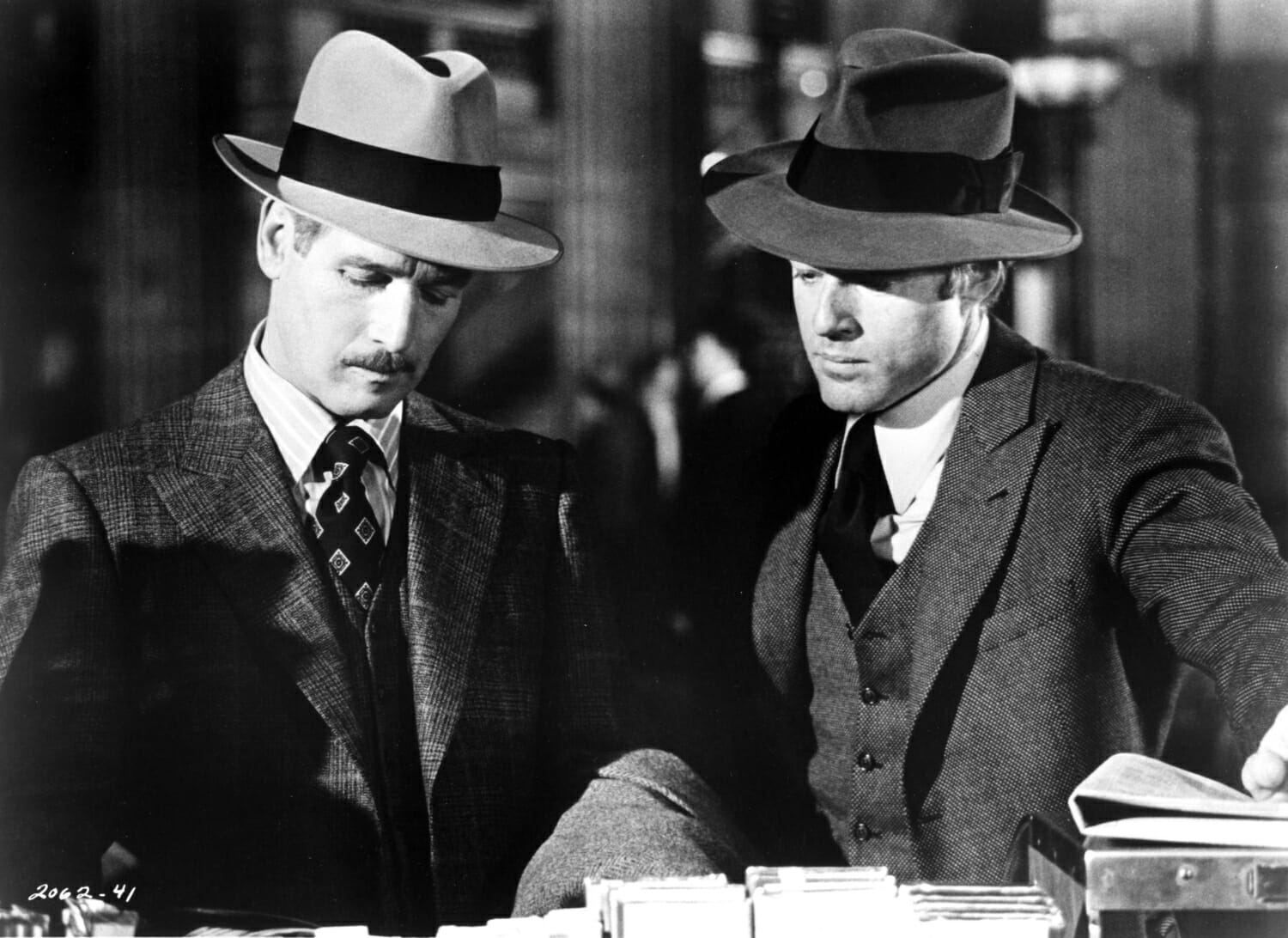 Paul Newman (L) and Robert Redford in 1973’s The Sting. Note the 1930’s costumes, including fedoras and suits with checks and patterns.

This version is the third of four movies about the title character. Originally penned by St. Paul native, F. Scott Fitzgerald, the novel is usually acclaimed for its language–but because of the setting, the clothes are of particular importance to anyone interested in men’s clothing. 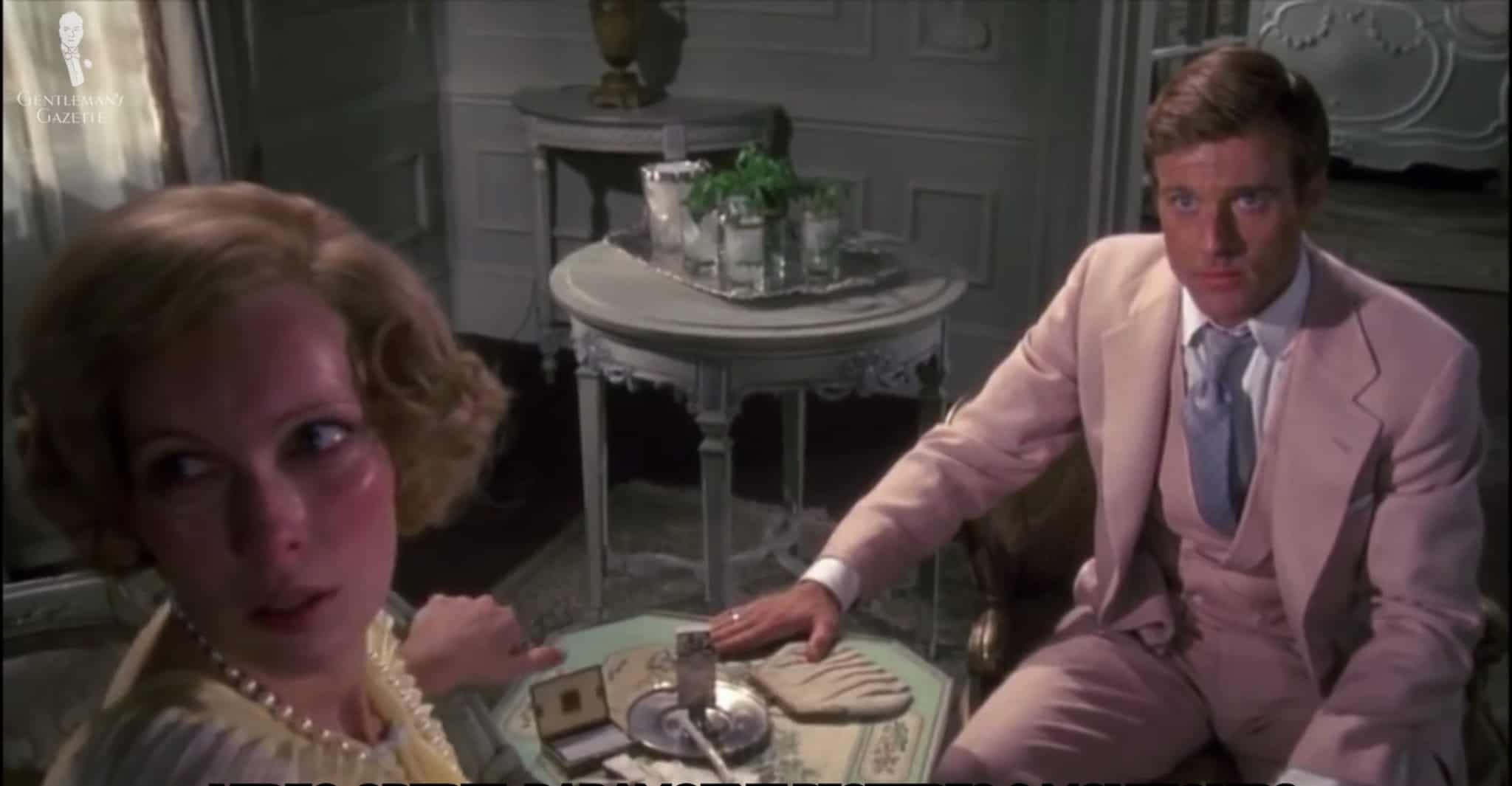 Robert Redford as Gatsby in the character’s signature pink suit.

Set in the 1920s, Ralph Lauren designed the suits and costumes in this movie. While they have a distinct ’70s flair, particularly the suits, they’re still very interesting to see–especially the pink suit that Robert Redford wears. By the way: we’ve also analyzed the style of the 2013 version of The Great Gatsby!

Chinatown is hailed by many cinephiles as one of the best movies ever produced. It won numerous awards and was selected for preservation by the Library of Congress. The reason we put it on this list is that Jack Nicholson wears very period-accurate clothing, particularly his suits. Set in 1937, you can see him wearing tastefully neutral-colored suits paired with bolder ties and hats that flatter his face shape. If you watch it in a higher-res version, you can also see the subtle patterns, which are quite nice. 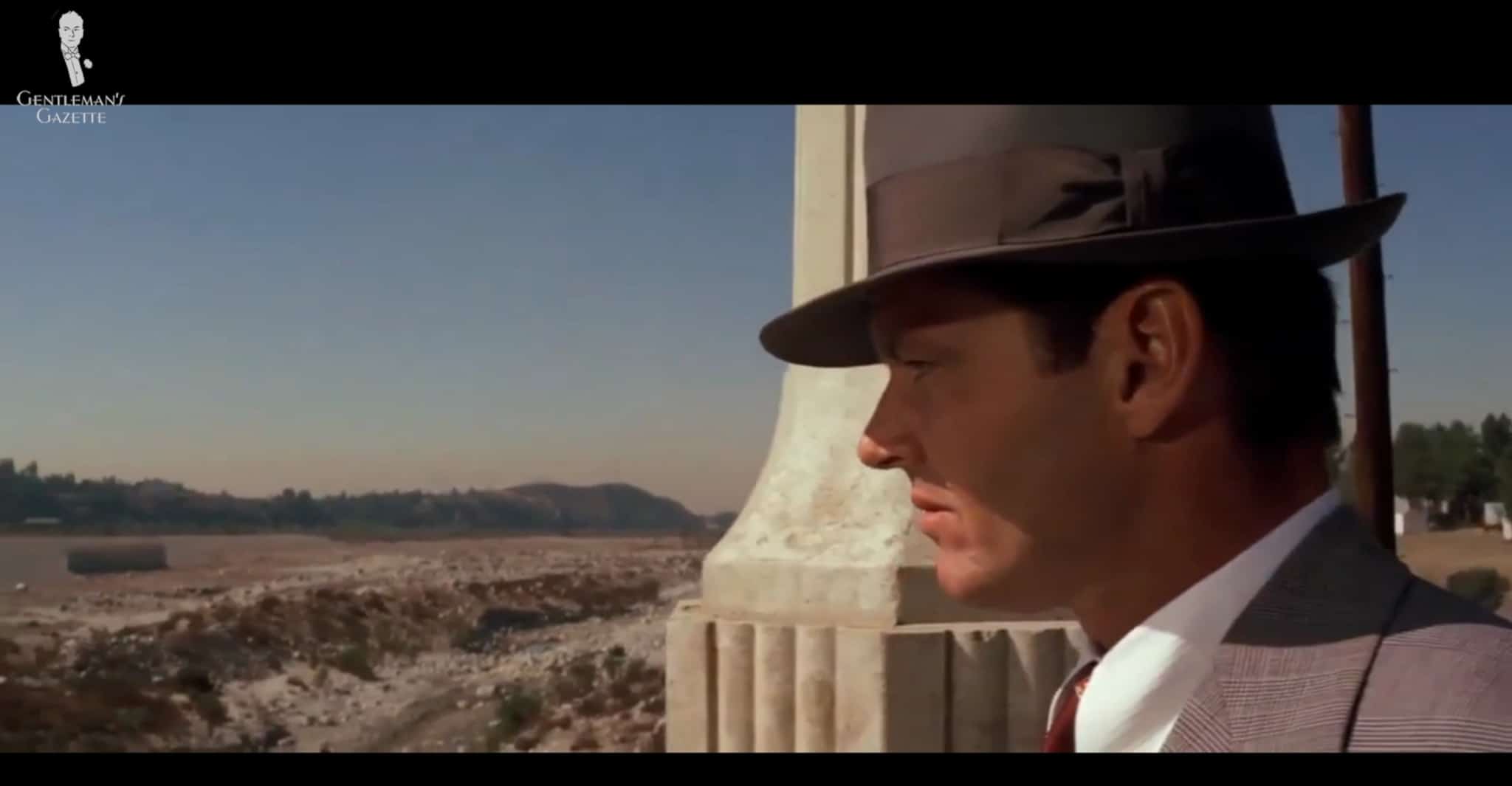 Jack Nicholson wearing a fedora hat at the spillway where Mulwray’s body is recovered.

American Gigolo established Richard Gere as a leading man in Hollywood, and it’s commonly known as being the first mainstream movie to feature a male leading star with full-frontal nudity. We think it’s worth watching for the clothes, however! 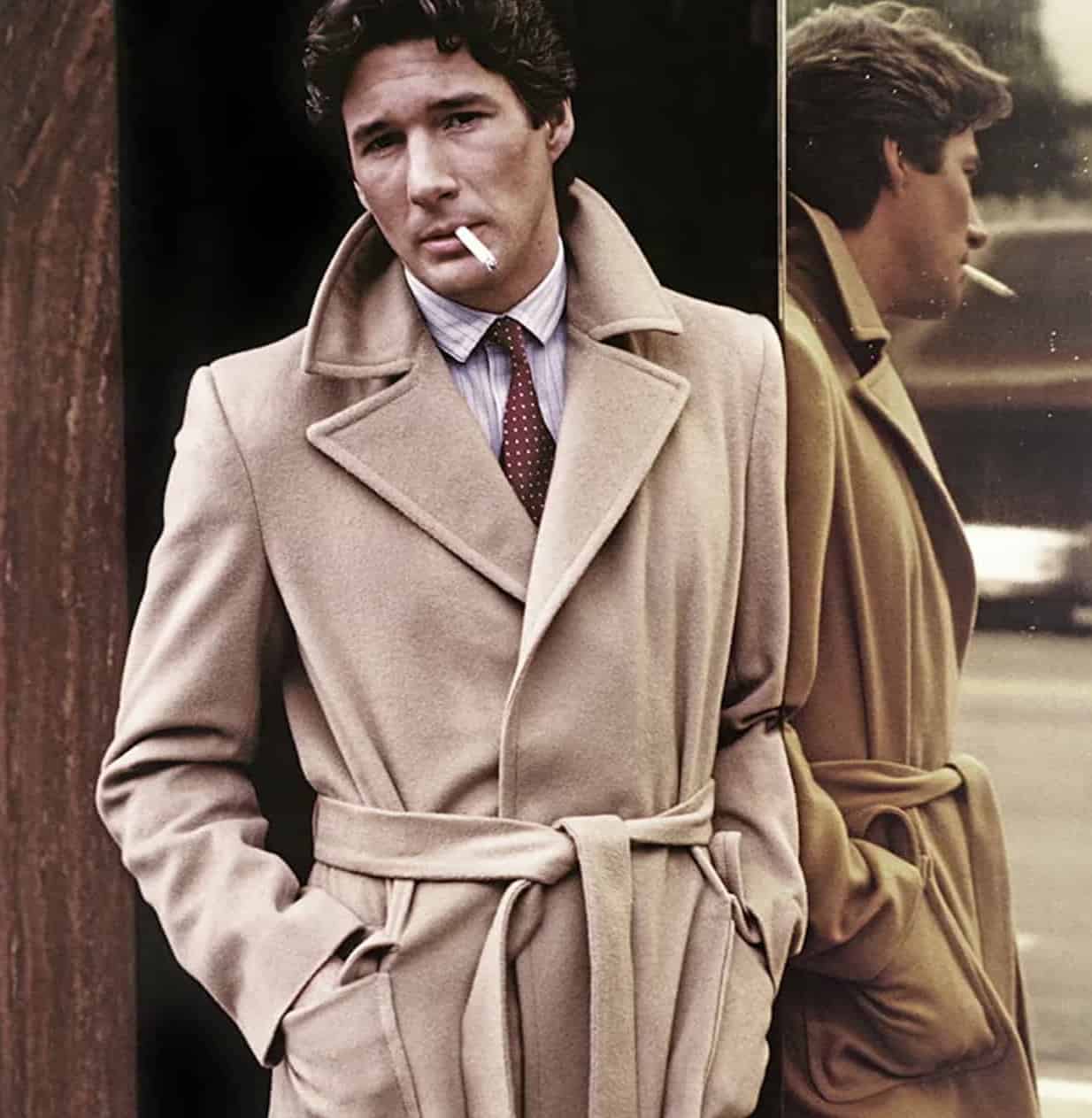 When Gere is actually clothed, he wears a number of different outfits that are also more prep influenced. He wears summery combinations with lightweight shirts and slacks, combinations of polos with sport coats, and a polo overcoat designed by Giorgio Armani.

This is another period crime drama. Set in the 1930s, Prohibition agent Eliot Ness puts together the “Untouchables” task force to bring down gangster Al Capone. Wardrobe-wise it’s interesting because there’s a clear distinction established between Eliot Ness and his Untouchables (who mostly wear dark, muted suits) and the much more loud, elaborate, and ostentatious outfits of Al Capone and the gangsters. For a clotheshorse, the black-tie and white-tie outfits of Capone are more interesting than the regular dark suits that The Untouchables wear. 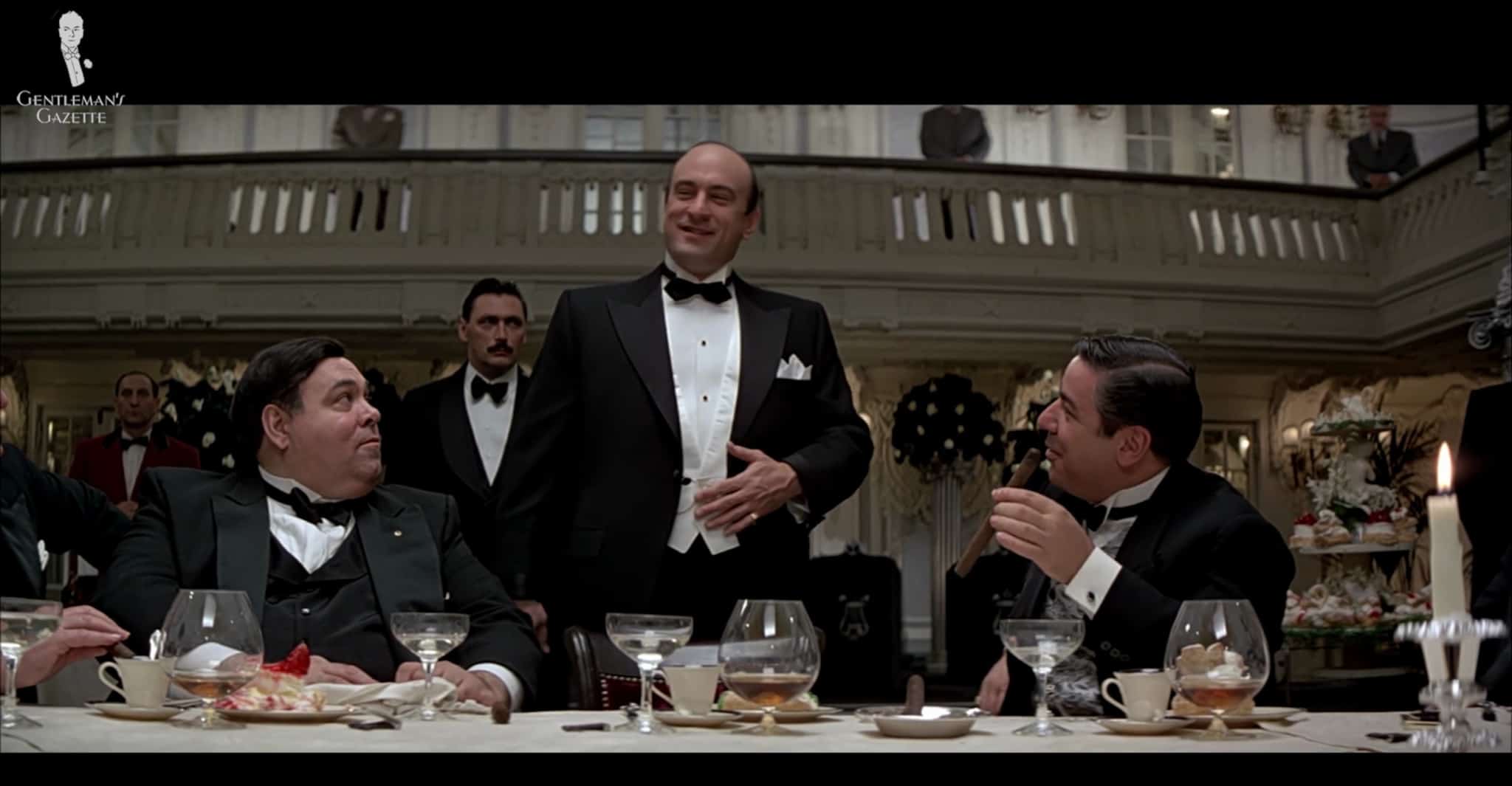 One movie that definitely can’t be missing from this list is Wall Street. Starring Michael Douglas as corporate raider Gordon Gekko and Charlie Sheen as a Wall-Street newcomer, this movie is really famous for its 1980s power suits. In general, it has come to be seen as representative of the focus on success and materialism in that decade. We’ve discussed Gordon Gekko’s outfits in our post on Halloween costumes! The film’s wardrobe was designed by Alan Flusser, who is a menswear style icon and author of many menswear books including Dressing the Man (which, if you haven’t read it, you should definitely check it out). 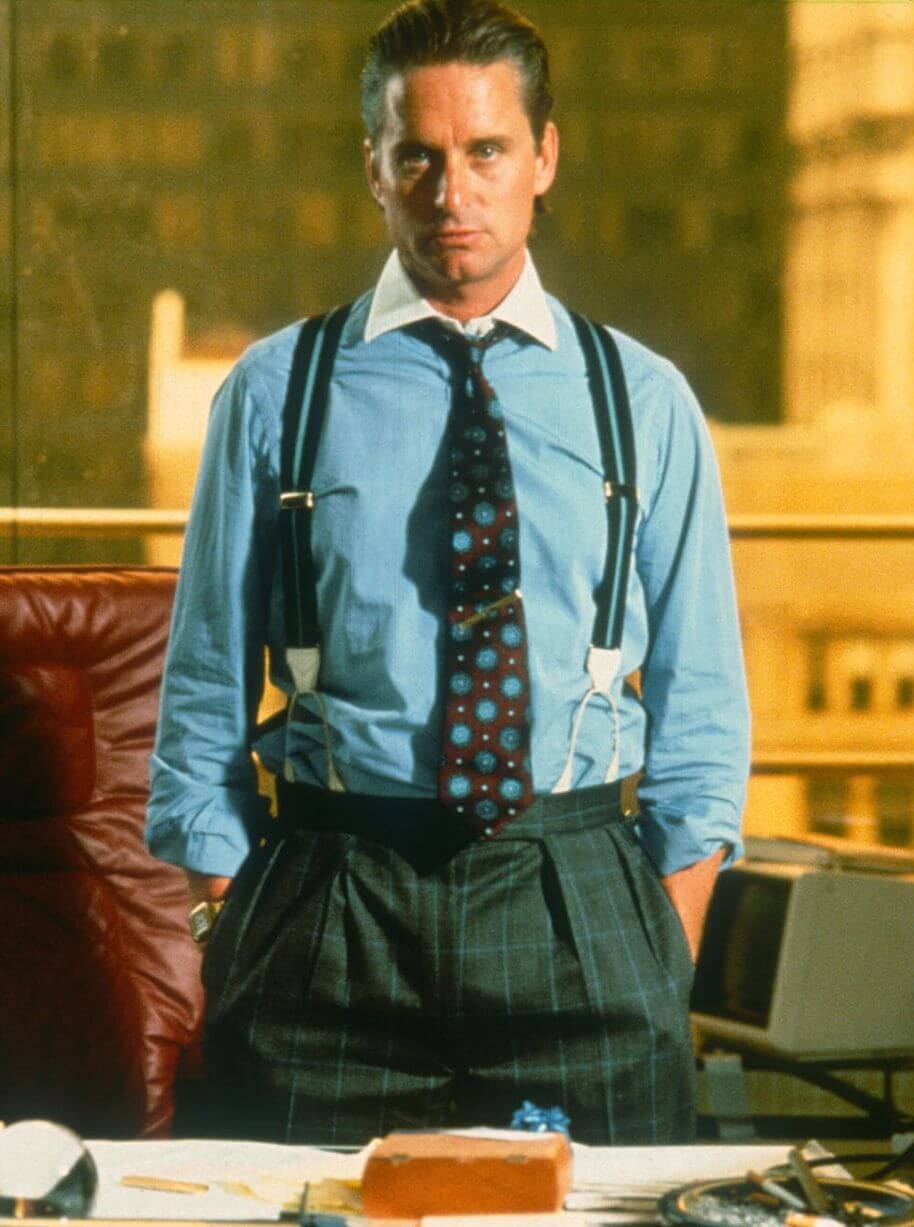 What stands out in the styling this movie are of course the double-breasted, peaked lapel power suits; the shirts, which are quite bold–including Winchester shirts with a contrasting white collar or even horizontal stripes; the suspenders, and the ties. You can also see lots of cufflinks, pleated pants, and cuffs. And while Gordon Gekko takes the top spot with his power suits, other suits are also interesting even though they’re a bit more muted.

Casino follows Ace Rothstein, a Jewish-American gambling expert overseeing a casino in Vegas. It is set in the ’70s, and if you’ve watched our video on The History of the Suit, you know that we’re not big fans of that decade in menswear; stylistically, it was just a sad time that was loud and filled with polyester and nylon. However, in this movie, the bold and excessive outfits fit in with the culture of Las Vegas. While we don’t recommend you wear the tone-on-tone suit and tie combinations and under lighter sport coats and suits which De Niro pulled off, it’s still fun to look at.

Robert De Niro (L) in a tone-on-tone ensemble in blue, and Don Rickles in a more conventional gray suit with a large-patterned tie

A psychological thriller set in 1950s Italy, this film is about the life of Dickie Greenleaf and how someone else tries to impersonate him. It’s a very stylish movie, with lots of casual clothes and a well-appointed interior design. Clothes-wise, it’s a mix of Ivy, Trad, and Prep, paired with Italian flair. You’ll see lots of Oxford cloth button-down shirts, linen polo shirts, blazers, and tweed coats. That aside, it’s definitely a great movie to watch.

While you might not expect a satirical, psychological horror film on this list, we added it here because it’s so iconic for its style and in particular, its “business card” scene. The movie is definitely violent, depicting the investment banker and socialite yuppie, Patrick Bateman. And while he doesn’t behave in a gentlemanly way at all, the power suits of the 1980s are definitely worth taking a look at, if you can stomach the harsher themes of the film.  Again you’ll find peak lapels, pinstripes, and bold shirts and ties. Even though some scenes in the office have a more beige palette, it creates a more ironically humorous effect. 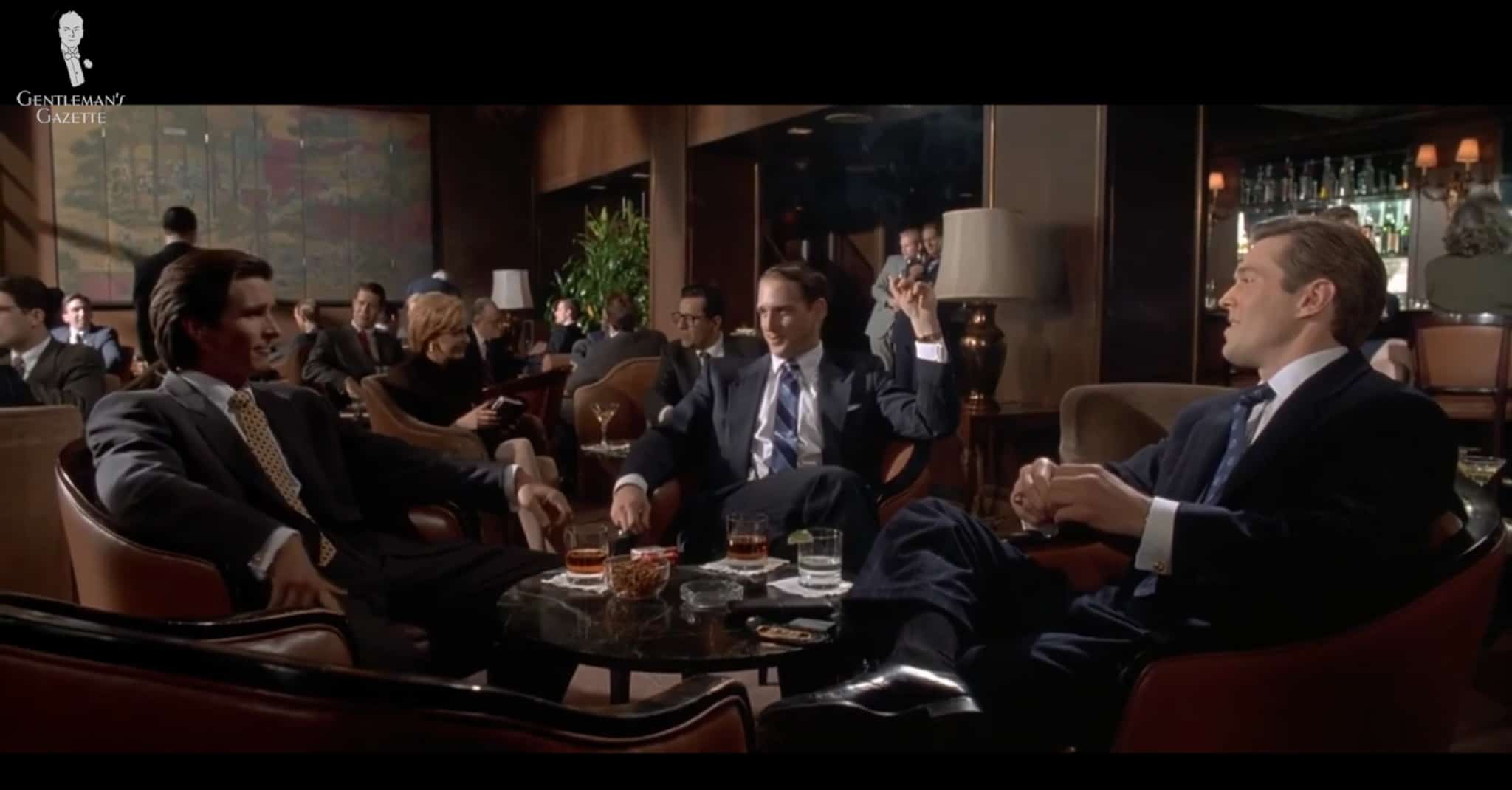 This movie is directed by Tom Ford, who also financed it. They brought in the costume designers from Mad Men, and so you have a very mid-century modern style in this movie. Of course with Tom Ford being a stylish clotheshorse himself, he paid particular attention to detail about the clothing, and because of that, it’s worth watching. 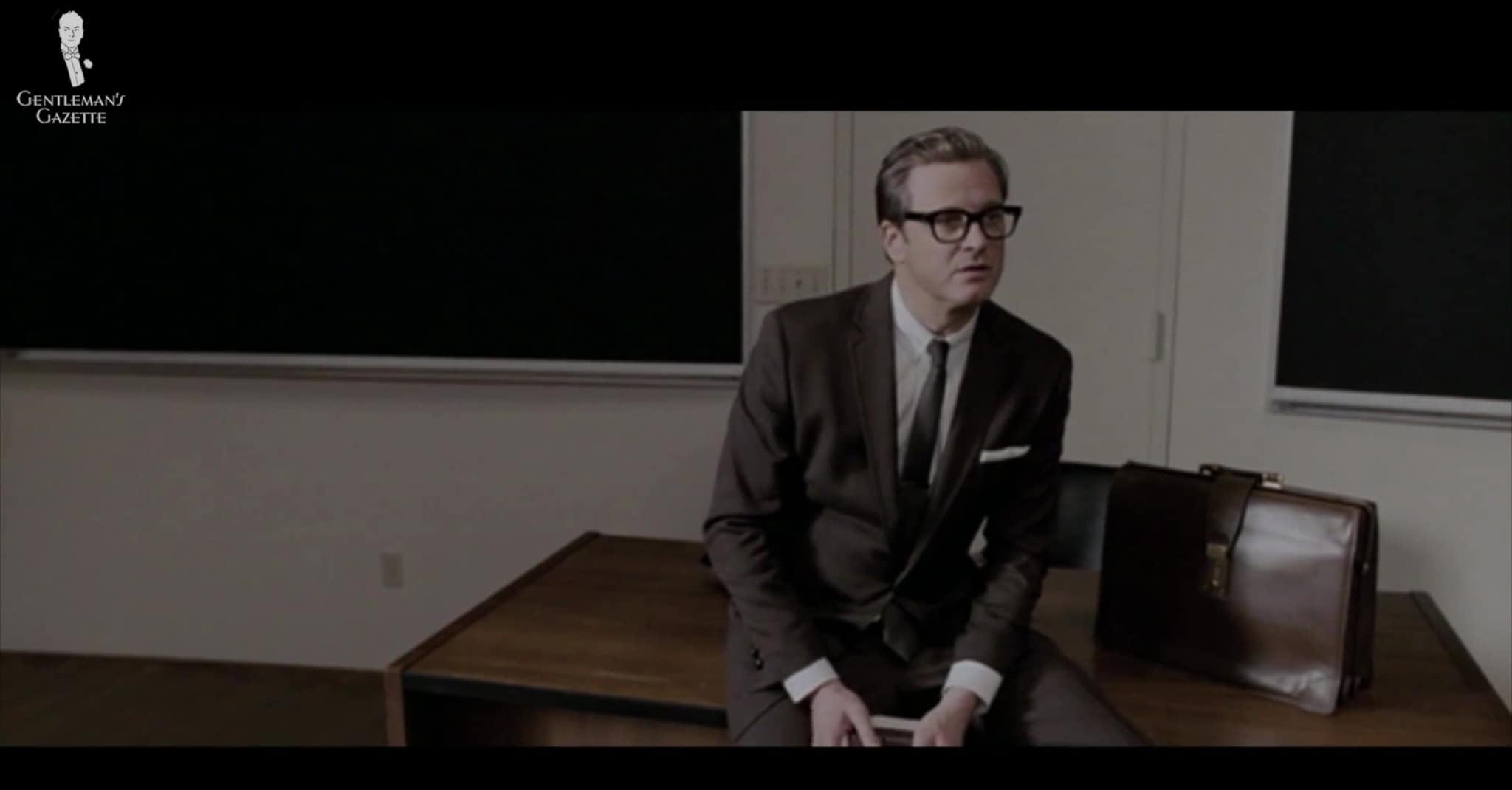 Colin Firth wearing a Copenhagen brown suit, the look of the studied academic at the same time has an almost old-world charm.

This features Ryan Gosling in a heist movie. The film received standing ovations at the Cannes Film Festival, but we put it on this list for the clothing, even though it’s a bit more rugged, featuring boots, denim, henley shirts, and in particular, driving gloves. If you don’t know it already, we’re big fans of driving gloves at Fort Belvedere, too! 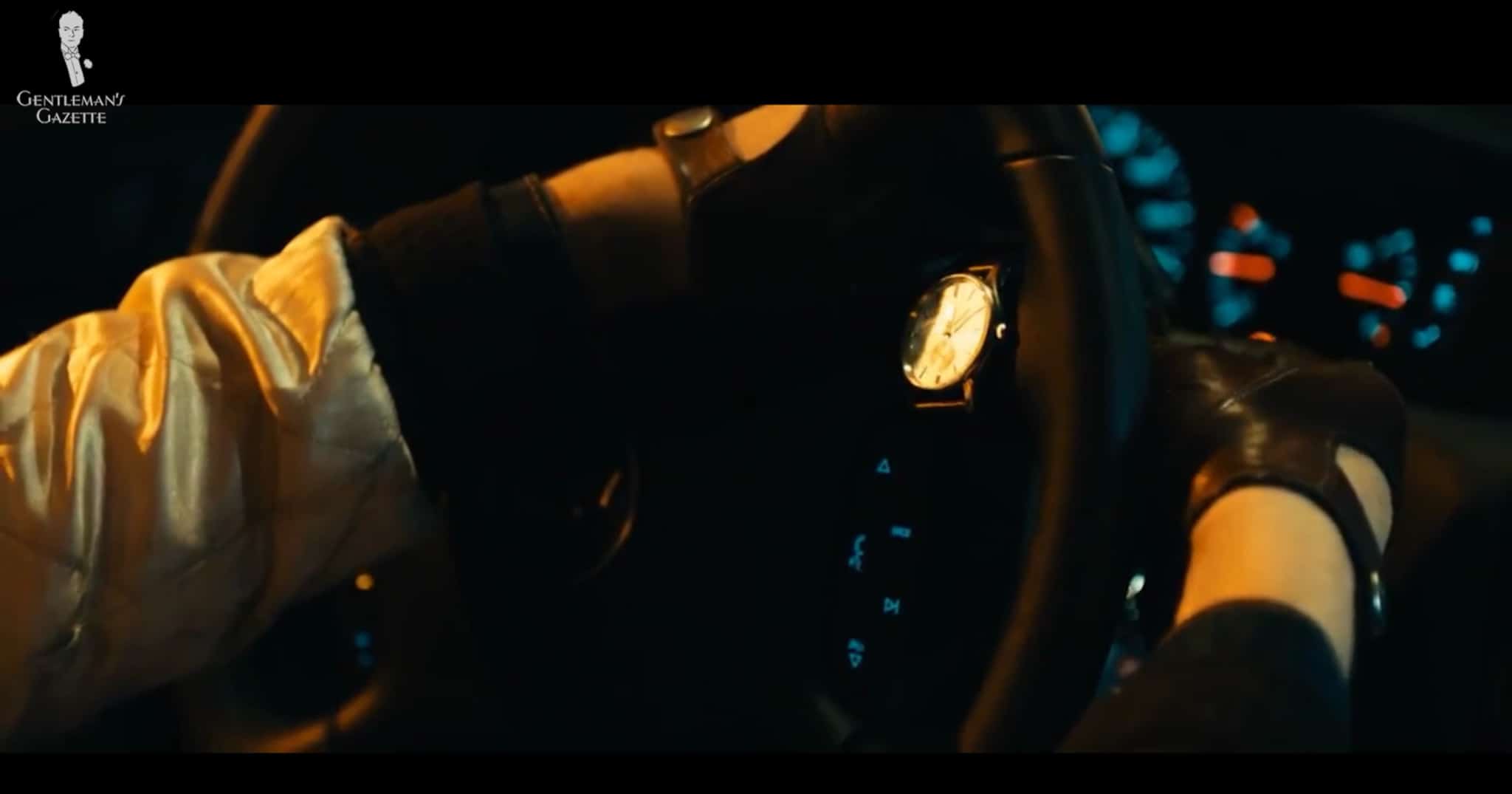 As big fans of driving gloves, we appreciate the gloves Ryan Gosling wears in 2011’s Drive

The title stands for Wallis and Edward, and it’s basically the love story of Wallis Simpson and Edward VIII who later became the Duke of Windsor (through the lens of Madonna, who directed the film). As a young Prince of Wales and later Edward VIII who then abdicated and became the Duke of Windsor, he was always known for his style. At the time, in the ’30s, he was one of the most photographed men in the world. 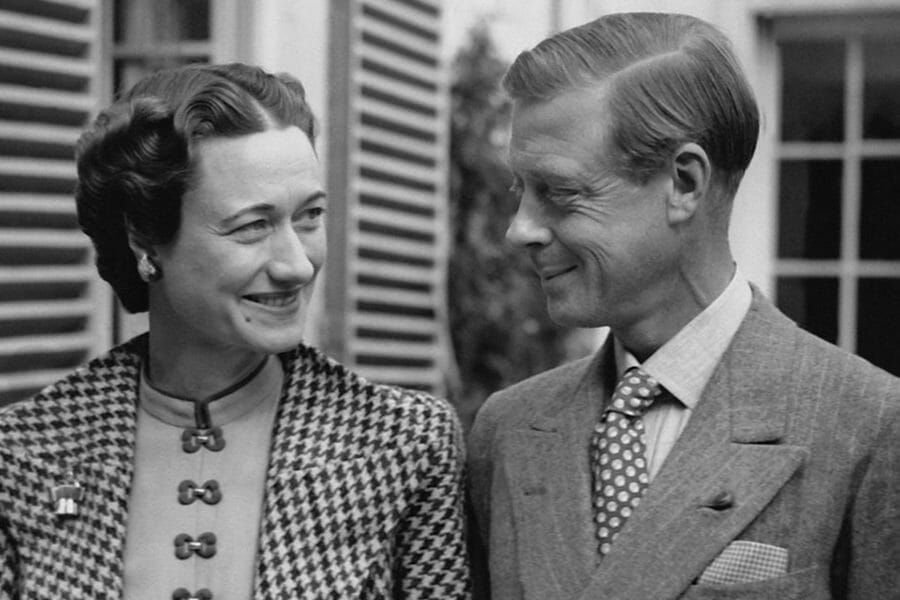 He revolutionized classic menswear by choosing soft, turn down colors versus stiff, detachable collars and many other things; and he was also known for his bold patterns and interesting looks. The stuff that you can see in this movie ranges from white tie to black tie and interesting casual wear. Of course, it’s an American movie, and we think it would have even been better and more period-accurate if it were British, but nevertheless, it’s worth watching for the vibe of the ’30s as well as the costumes.

This movie is probably a little less popular, but still on our list. Here, Geoffrey Rush plays an eccentric art expert and managing director of an auction house who collects art. The film features not only some inspired upper-class interior design, but also an extensive wardrobe for Rush’s character; he’s often seen wearing three-piece suits and interesting subtle combinations. 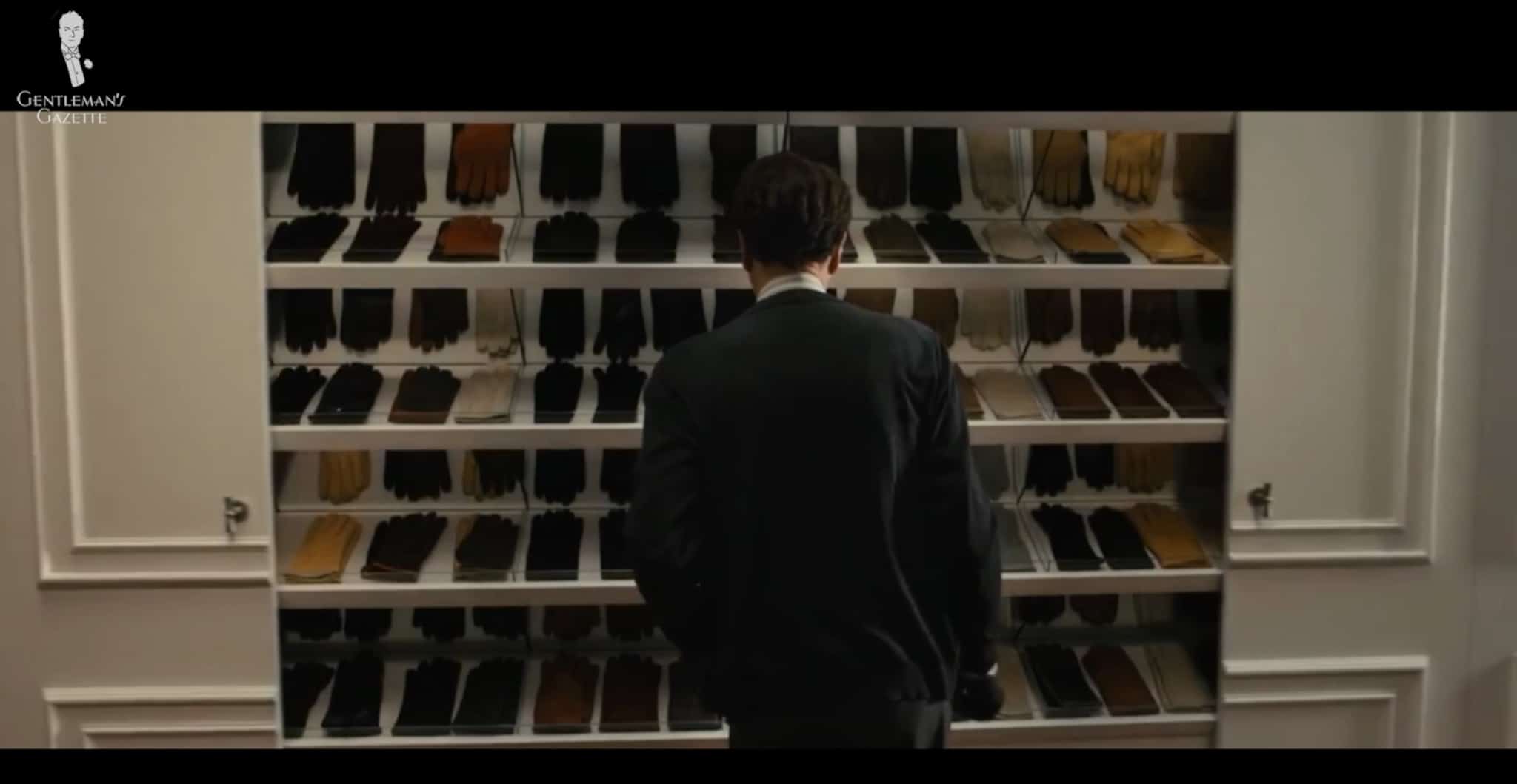 He also wears gloves at all times, because he’s afraid of infection. In our opinion, the best thing in the whole movie is the extensive glove closet, which hides the entrance to his private art gallery. It’s such a cool closet because it features mirrors, and with its sheer size, it is much bigger than most people’s regular closets.

A spy/action movie directed by Guy Ritchie, this film is set in the Cold-War era of 1963. It’s interesting from a wardrobe perspective because the two main characters (played by Henry Cavill and Armie Hammer) are really differentiated through their onscreen wardrobes.

Henry Cavill as CIA agent Napoleon Solo, in a gray-blue suit with a large overcheck

On the one hand, you have the debonair Napoleon Solo who wears three-piece suits in lighter shades of grey and blue; on the other hand, you have Illya Kuryakin who wears muted suits or ensembles of a suede blouson jacket with a flat cap and slacks.

Bringing us full-circle with Part 1 of this series, this movie is set in Hollywood’s golden age of the 1950s. While the film wasn’t well-received by audiences, we included it here because the fashion designer of the movie did months of research to achieve period accuracy for the late 1940s suits. 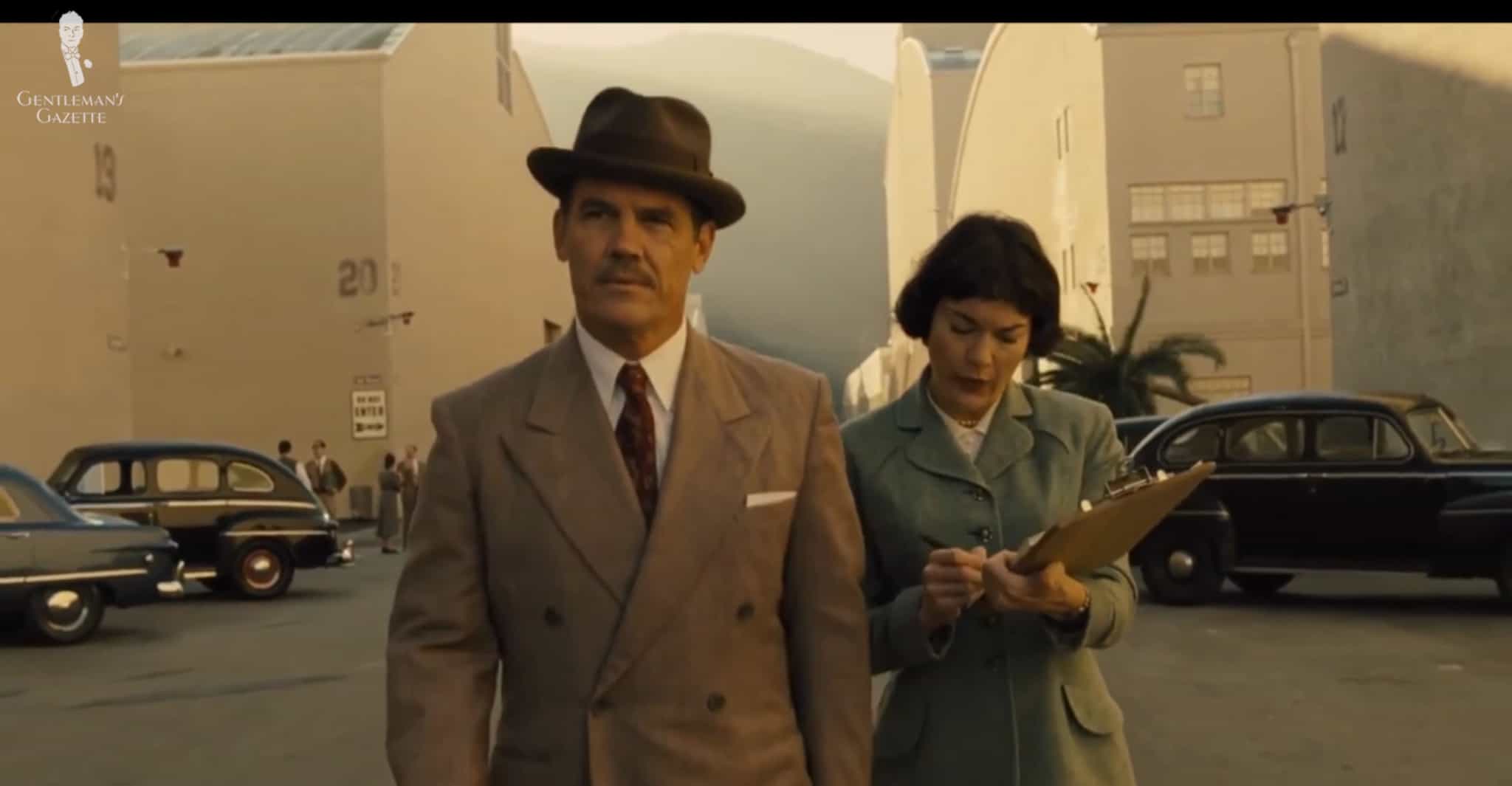 For example, star Josh Brolin’s double-breasted suits and Homburg hats were chosen so they worked well with his complexion. Also, his mustache was styled after Walt Disney, and his hair was permed. You also see characters wearing black tie, patterned sport coats, ascots, and other ensembles.

There are two great films featuring menswear we didn’t discuss here: one is The Artist, which won an Oscar for Best Picture–but we’ve already discussed that in-depth in this piece, and the other is Kingsman: The Secret Service, which has had such a profound impact on menswear in pop culture that we should probably cover it in similar depth in the future. Stay tuned! 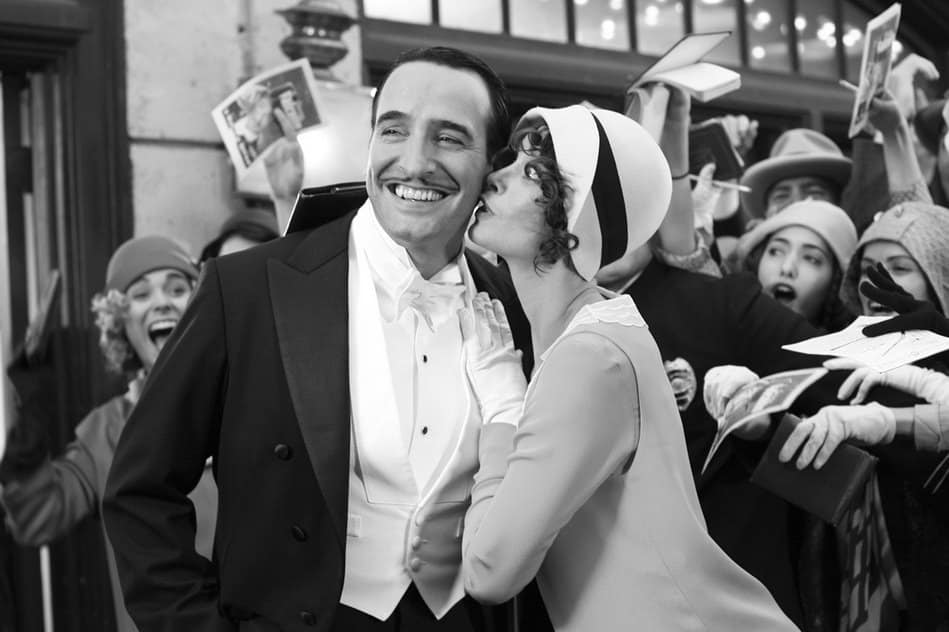 Are there any other movies that you think should be included on this list? Share with us in the comments!