Today’s post is one that many of you have asked for: an interview with my mom! I’ve shared snippets here and there over the years and gotten so many questions about her career in fashion, raising four children, deciding to go back to school, becoming a registered nurse, and becoming a resident director at ABC. My mom is one of the hardest working people I know and has contagious energy and enthusiasm that I’m excited to share with all of you! Today happens to be her birthday so I thought there was no better time to sit her down and have her walk you through all the above. I’ll be sharing her interview in two parts, one about her career and the next about family life. I hope you enjoy! xx

I’ve gotten a lot of questions about your career path and how you went from working in fashion to working as an RN. Let’s start with your first job out of college.

I graduated from Wheaton in 1980 (when it was still a women’s college) with the hopes of entering VISTA, the domestic part of the Peace Corps. Unfortunately they were looking for skilled volunteers (nurses, agriculturalists, engingeers, and the like) at the time so I wasn’t granted a spot. Instead I moved to New Hampshire to take care of a family friend’s daughter and help her father edit his book, Nantucket! Nantucket! by Dick McKay.

I totally forgot you lived in New Hampshire! I’m glad we’re doing this. How and when did you end up at Ralph Lauren?

I secured a job at Ralph Lauren in February 1981 through a family friend who was already employed there. It was a little-known company back then! I spent the majority of my nineteen years at Polo in the menswear division overseeing the product development process. 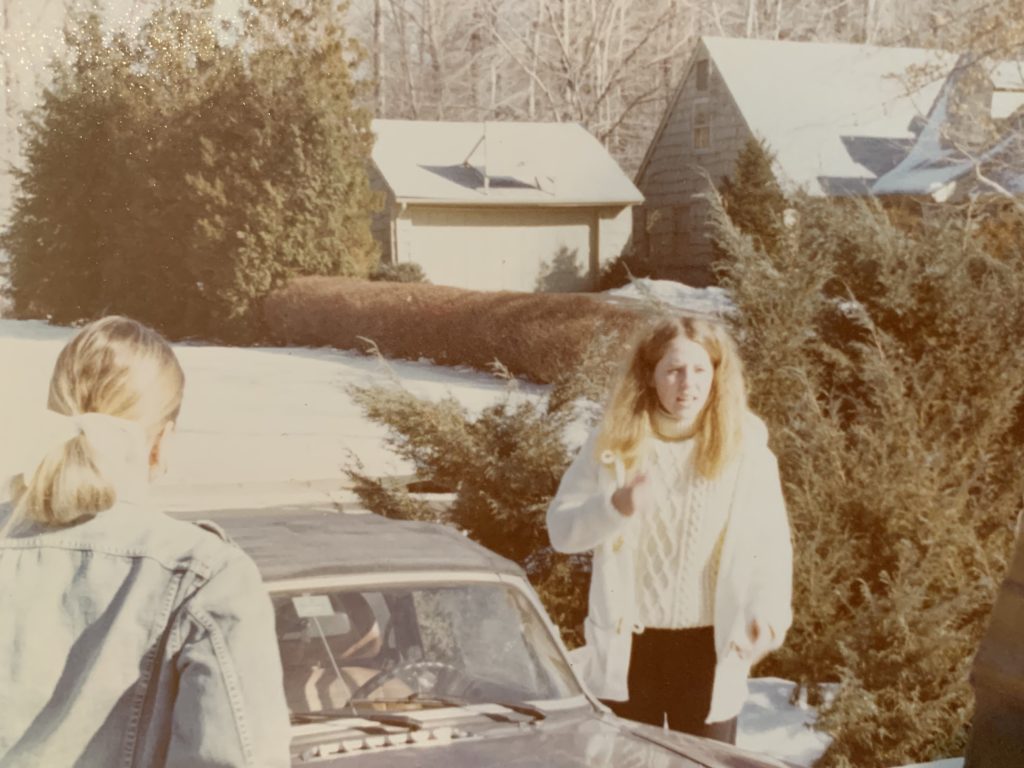 my mom at her childhood home in Ridgewood, New Jersey, 1975

But you started out as an assistant, right? Can you walk me through the progression of your roles at Ralph Lauren?

I started as a customer service associate managing communication with Polo’s retail stores answering questions about knits and sweaters. There were 25 of us in the New York office back then and we had no computers so everything was done over the phone. I think I made $13,000 a year and I felt like I’d made it.

I can’t believe you were one of 25 New York employees at one time.

It was a really exciting place to be. Ralph had been making suits and ties and had just embarked on designing sportswear and we all felt like we were at the beginning of something huge. From there I was moved to a production associate role in men’s knitwear and was tasked with figuring out how to ship Polo knit shirts pre-washed to our consumers. Ralph liked the idea of buying something in the store exactly the way it would fit forever as opposed to buying a shirt that would shrink at home after the first wash. It was also during this time that we made the difficult decision to move production overseas as it became harder to find American factories that could produce everything we needed at Ralph’s standards. I was developing specifications for the new factories to follow in order to get our men’s shirts made.

You have some crazy stories from your time in product development. I remember one about an FBI raid?

Yes, I spent three years combatting the growing problem of counterfeit polo mesh shirts. I went on an FBI raid of a warehouse in Louisiana where they had their guns drawn and I remember testifying in a case in Montreal where the judge wore a white wig and old-fashioned gown. It seems like a lifetime ago, but I became an expert on how to differentiate between a counterfeit and an authentic Polo knit shirt.

What was your official title when you were participating in these counterfeit raids?

I was the Director of International Licensing — it was probably 1987 or 1988. We couldn’t tackle the counterfeit problem overseas unless we were a registered trademark in that country, so we would partner with a different company in each country where we were having counterfeit issues and help them develop Ralph Lauren product for consumption in their country. So there would be chino pants or oxford shirts made by Brazilian licensees and consumed exclusively by the Brazilian market. And it was through that that we realized there was huge business to be done outside the United States and that Ralph had developed a big international following. 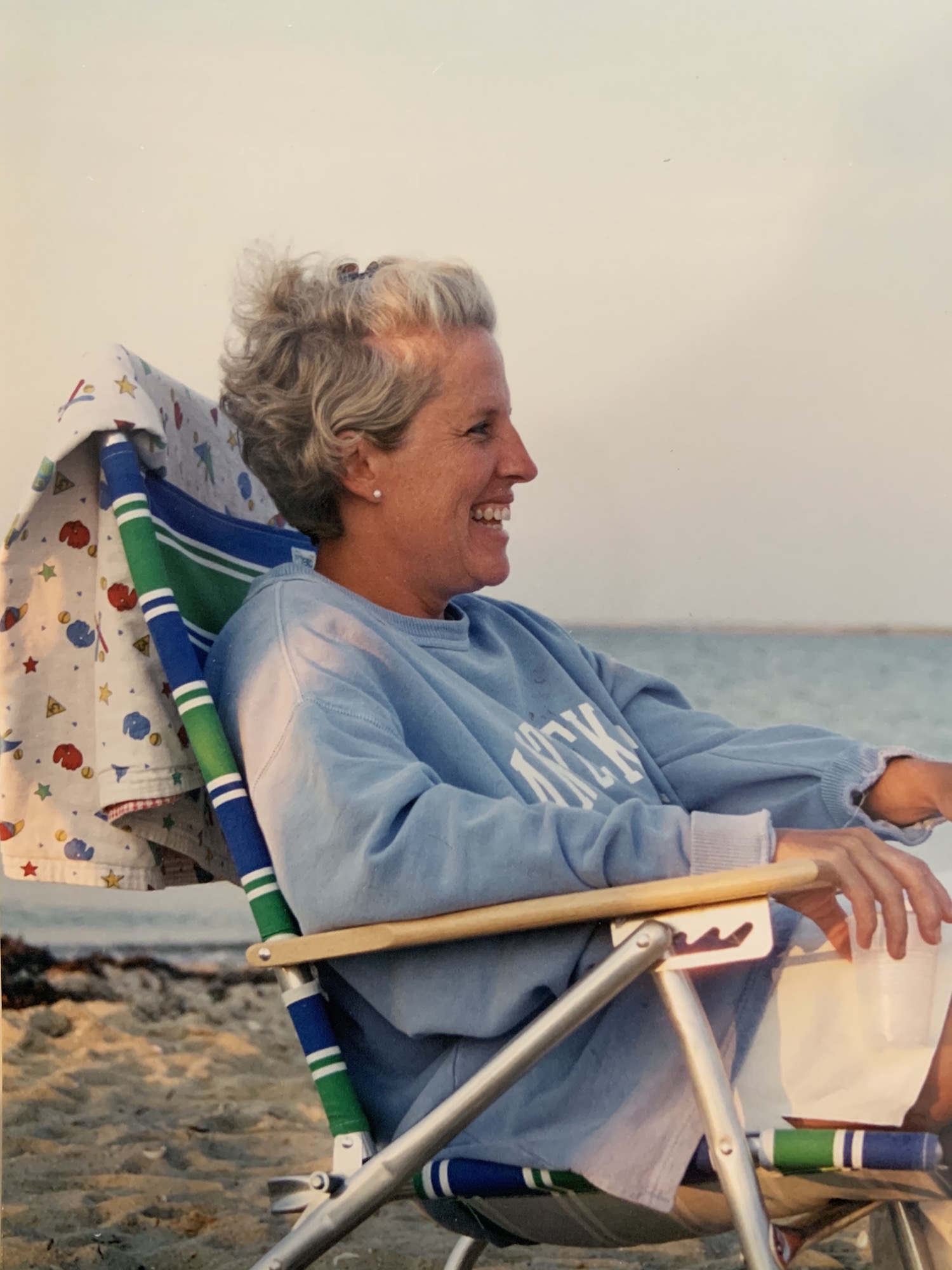 When did you make the decision to leave Ralph Lauren?

I left in 2000 as a Senior Vice President of Polo’s factory store business. We had gone public in 1995 and it became increasingly difficult to get decisions made while managing for the bottom line. I knew I was ready to leave this extraordinary company and try something new.

And that’s when you went to Coach.

Yes, Reed Krakoff had been in Ralph Lauren’s womenswear and left before me to lead the design efforts at Coach. I was fortunate to secure a newly created position in product development and quality assurance. Reed took the company from old, traditional Coach to a seasonal and trendier assortment. We worked very hard sourcing manufacturing throughout Asia and thankfully watched the stock price (ticker COH — our youngest son’s initials!) grow quite a bit during those years.

You traveled a lot for work back then.

I did. It was at this time that I realized while I loved fashion, I loved my family more. A friend had always said that if you’re going to work outside the home, the time to be back around your kids is when they’re in high school. With you entering ninth grade and stock from Coach making it possible for us to save money for each of your college educations, we decided that the big things in life were taken care of. We didn’t need to work sixteen hour days or travel to Asia four times a year for weeks at a clip. 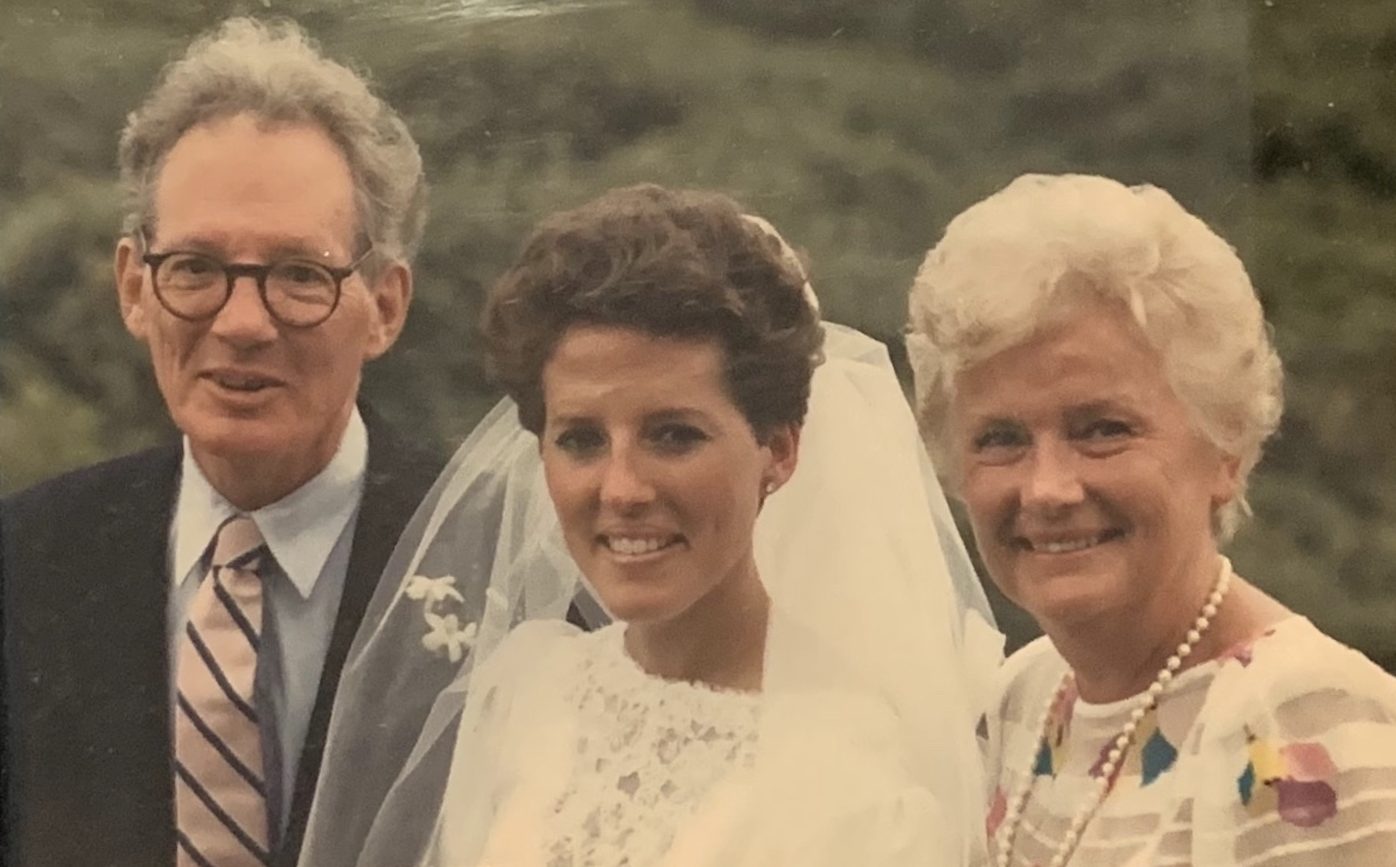 my mom with her parents on her wedding day, 1986

I’m sure Dad was happy not to have to hold down the fort during those Asia trips anymore. Did you always know you wanted a second career in nursing? Both you and Dad have a lot of doctors and nurses in your families.

Yes, I grew up in a family where my father was a pediatric surgeon at St. Luke’s in New York City (where you were born!). My mother was a surgical pediatric nurse and my sister was a nurse at Children’s Hospital in Boston.

And your great grandfather had been an eye surgeon.

Yes, it was through his practice that we would spend summers on Nantucket. [You can read that story here.] We didn’t grow up wealthy — we were a typical middle class family in northern New Jersey and Nantucket wasn’t the posh place that it’s become. Life was much simpler then!

I feel like it’s changed a lot even in my lifetime. But back to your career transition…

Right. I had this lifelong desire to follow in my family’s footsteps. I was 45 when I decided it was my turn to go back to school and become a nurse. Initially I attend Norwalk Community College and graduated with an Associate degree in nursing in 2006.

I remember I was in high school and we were taking some of the same math classes at the same time. Was it different being in school in your forties vs. as a young adult?

Most definitely. I was there because I wanted the education and needed it in order to advance in my chosen career. In college I just wanted to have fun [laughs]. I liked being back in school so much I later went to Fairfield University and earned a BSN in 2013. 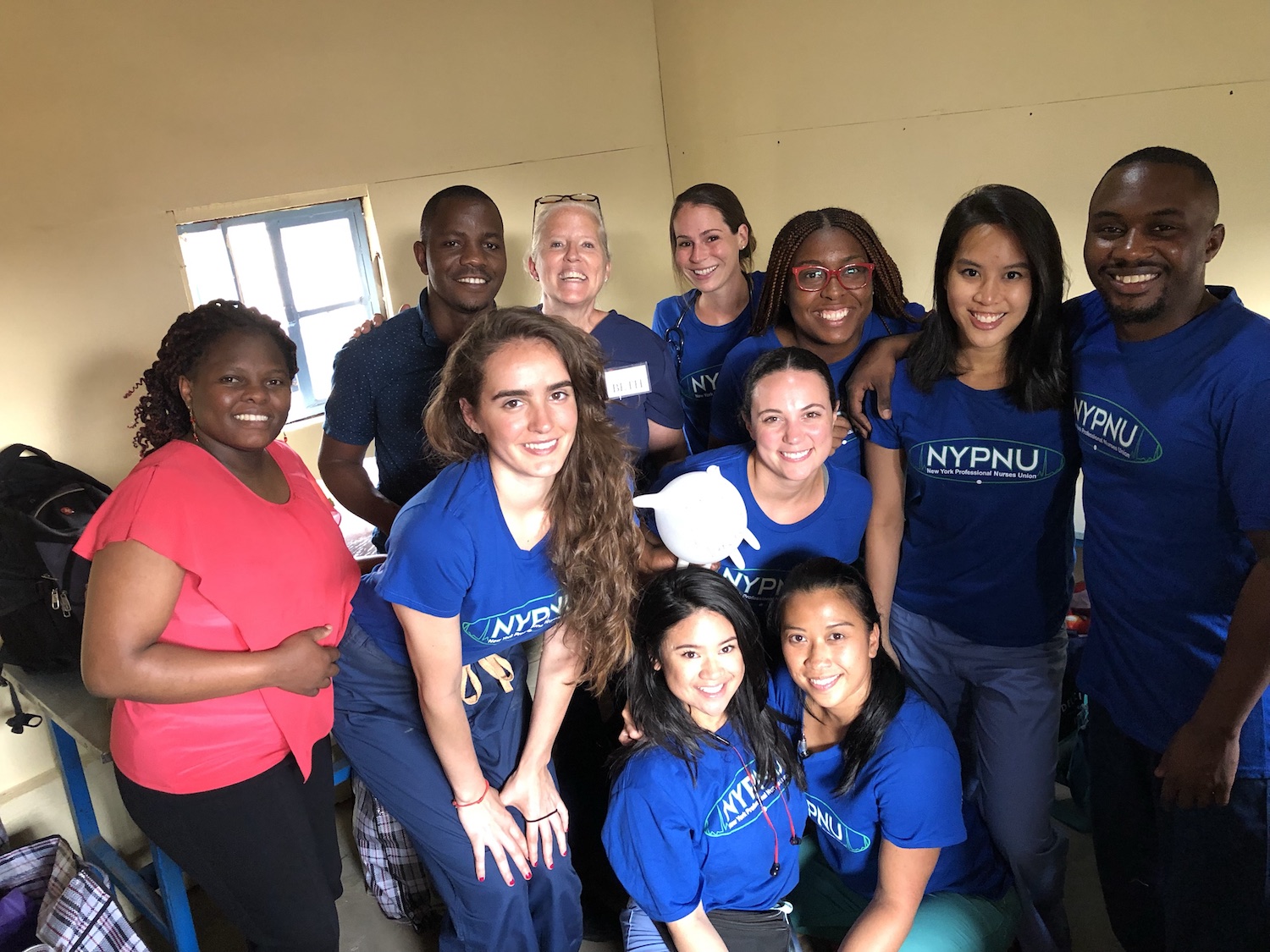 on a medical mission trip in Nairobi, 2019

When did you start working as a nurse?

I passed my nursing boards and started working on the oncology floor at Stamford Hospital in the fall of 2006. I spent a little over four years caring for cancer patients and their families and then I moved to the emergency room when our two sons became EMTs.

Can you explain the EMT program for everyone?

Darien has a high school EMT program called Post 53 where Darien High School students respond to calls and transport patients to the emergency rooms in neighboring Stamford or Norwalk. They become licensed through the state of Connecticut as emergency medical technicians in tenth grade. I decided to switch to the ER so I could see your brothers and their friends bring in patients and help with their growth in the medical field. I began teaching at Post 53 to help burgeoning EMTs learn about neurologic, respiratory, and other emergencies. I became a licensed EMT in addition to a certified instructor, but I never rode on the ambulance with your brothers!

And you were in the emergency room for about three years, right?

Yes. In 2013 I suffered an injury while doing chest compressions on a very overweight patient and needed surgery to repair prolapsed organs in my pelvic floor. I decided I should be working in an area that required less physical exertion so I went to work at an ambulatory surgery center in Wilton. 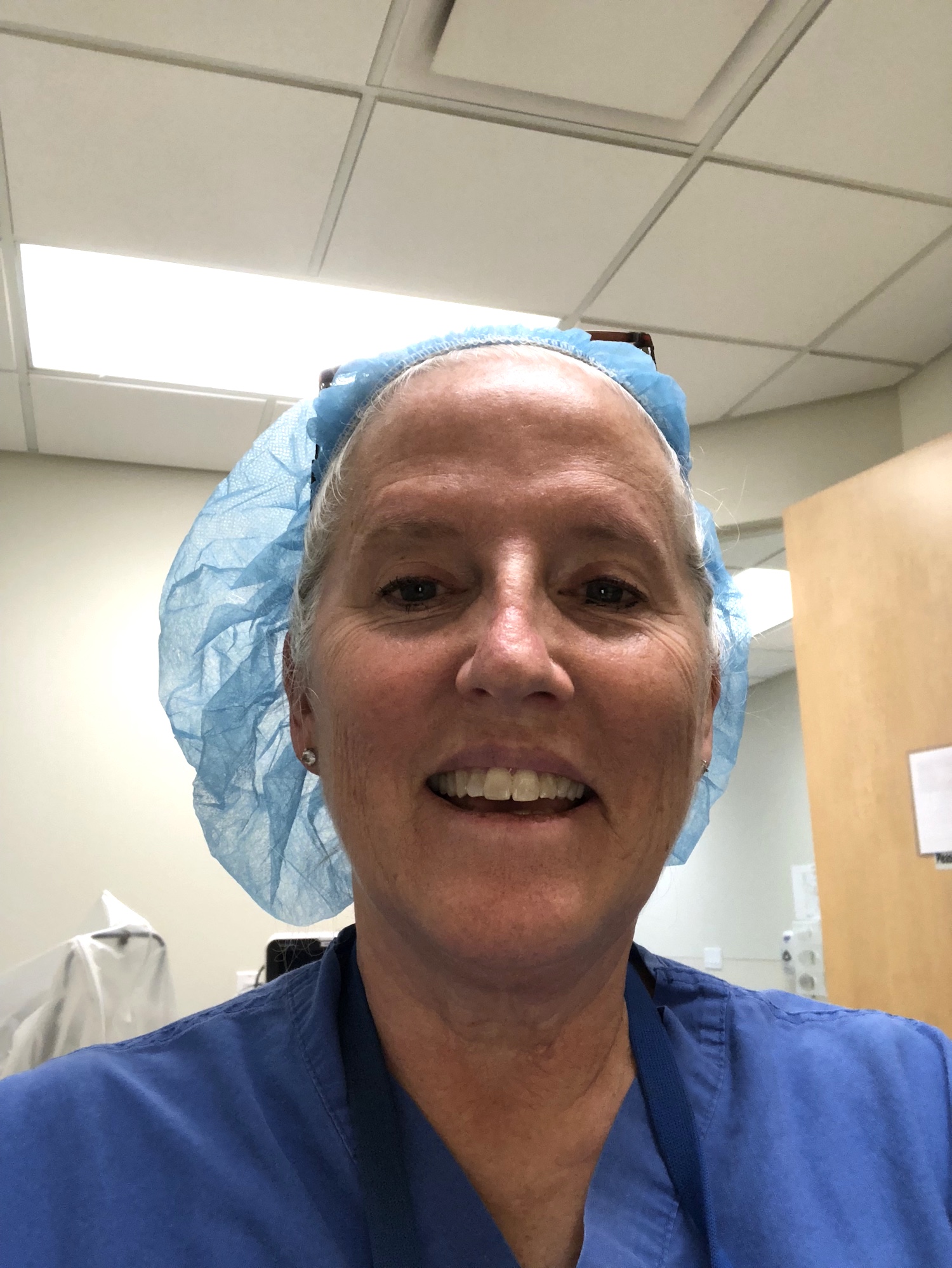 at the ambulatory surgery center, 2018

I think that was a relief to all of us. How did you decide what to do next?

Around that time our son Grayson spent his sophomore year of high school at a boarding school and Dad and I began to think about eventually retiring to a boarding school environment where I could practice nursing and he could teach math. My nursing career at the ambulatory surgery center wasn’t nearly as exciting as it had been in the emergency department, but I had my hands full outside of work with selling our house, supporting Dad while he was working on his Masters, and transitioning to life in the ABC house.

You convinced Dad it was time to start his second career too.

Yes, the mortgage business had fallen apart in 2008 and Dad was already slowly reinventing his career by taking individual courses. In 2015 he enrolled full-time in a masters program to secure a degree in teaching, specializing in secondary math. We thought we were positioning ourselves to sell our longtime home in Darien and move to a boarding school as dorm parents. 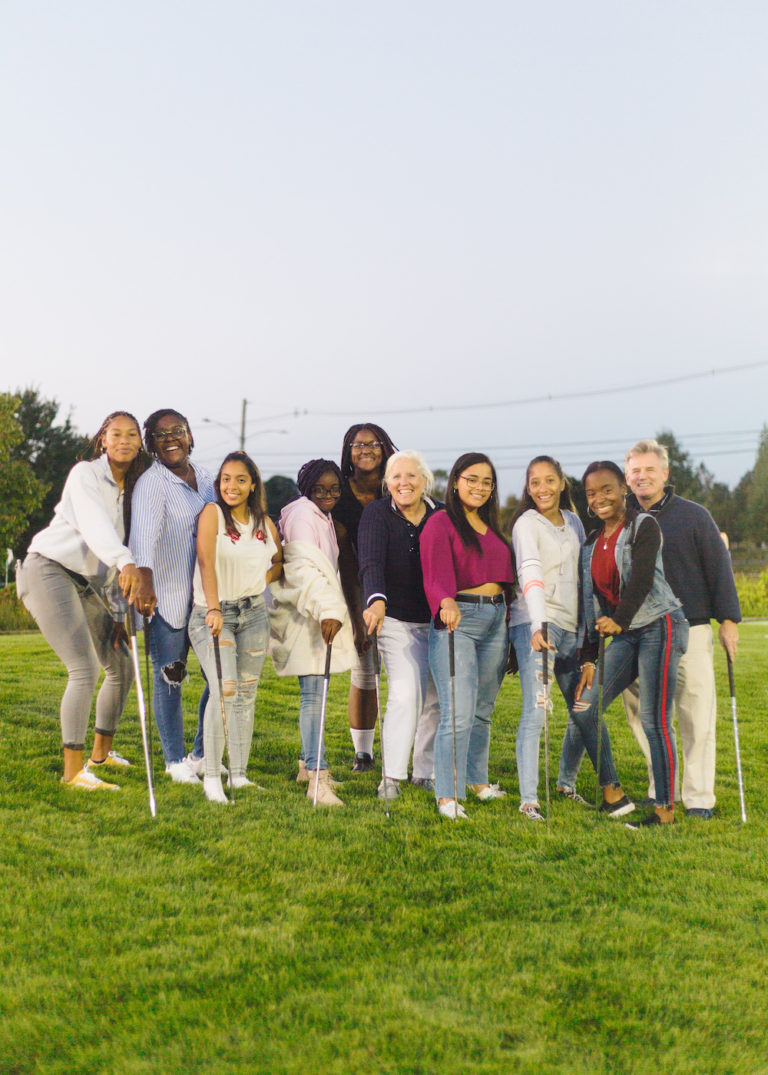 And that’s where ABC came into play.

Exactly. Fast forward to 2016 and the opportunity to interview for the resident director position at A Better Chance in Darien came up. We leapt at the chance — three of our four children had graduated from college and we saw it as an opportunity to stay in Darien so our youngest Camden could see his high school friends during college vacations. [You can read more about my parents’ work at ABC in this post.]

When did you transition from the ambulatory surgery center to becoming a school nurse?

I became a long-term substitute at an elementary school in Darien in February 2019 and got a full-time offer at our local middle school for September 2019. I loved the idea of having summers off so Dad and I could both be on Nantucket and it’s been a lot of fun to work with kids. It’s been a definite adjustment as a lot of the bedside nursing skills I needed in the hospital and the surgery center are no longer relevant in a school environment, but the upside is I love my cowokers and my patient population is extremely cute.

We’ll be back tomorrow with more questions about her home life as a mom of four. Stay tuned!