By the author of  An Arm and a Leg and Zombie Choices.

Talks with James over at PrepperBroadcasting.com have convinced me that it’s a good idea to possess non-lethal means of self-defense as well as firearms. We live in a society today that is incredibly litigious, and there are some situations you could find yourself in where the ability to defend yourself without incurring a fatality could save you a lot of time and money in a courtroom/on legal fees.

James is a big advocate of extendable batons, pepper sprays, tasers, and the like. As a result, I picked up two different stun gun flashlights the other day that fall in line with James’ thoughts here.

The first was the ZAP Stun Gun Flashlight, while the second was the Taser Strikelight, both of which are available over at TheHomeSecuritySuperstore.com.

So, when faced with the prospect of needing to test two very shocky flashlights, I did the same that any other guy out there would do – I grabbed my brother and told him to close his eyes.

I suppose that’s one of the catches about trying to test out taser/flashlight combos. You can’t really go around poking people with them unless you want to get marked off the Christmas present list.

The first thing I did, though, was a test to see how the actual flashlight performed. This pretty much involved my walking around my house in the middle of the night with a flashlight. Right off the bat, it was easy for me to see that the ZAP was a brighter light. The Taser brand light wasn’t anywhere near as bright as I was expecting it to be.

So the winner here is clearly the ZAP when it comes to the better flashlight. There wasn’t even a contest.

How quick can you deploy one of these?

The next thing I tested was the shock. How easy was it to “pull the trigger?” Again, I found that the ZAP was superior. All you have to do with this model is use your thumb to flick the power all the way on and then press the round button. You instantly end up with electricity.

The Taser brand required a bit more maneuvering. You have a safety switch on one side of the flashlight, and then a “trigger” button on the other side of the flashlight. It took me a bit longer to get both switches done, and if you’re pulling this out of wherever you’ve stored it really fast, I can see how that would be an issue.

And here is where I found the biggest flaw with the Taser Strikelight.

There were many times that the Taser brand flashlight took 1-2 seconds to actually activate after you press the button. There were numerous times I couldn’t get the taser to activate at all. Sometimes it would be an immediate electric jolt, but it by no means was reliable. The other taser flashlight engages as soon as that button is pressed. Imagine having a gun that didn’t shoot until 2 seconds after you pulled the trigger. Could that create some problems?

If you are in a situation where you actually have to use a taser light, you don’t have 2 seconds to fart around. It’s the equivalent of asking for a timeout in the middle of a gunfight.

“Hold on, everybody! Hold on! I need you to hold still for the next two seconds, please. I’m going to make you poop your pants and leave you dazed on the ground.”

(Want to know how to starve the beast? Read our free QUICKSTART Guide.)

That being said, let’s take a closer look at the ZAP light.

This thing looks like it came straight out of Luke Skywalker’s pocket. It looks like an angry lightsaber. There are big, nasty-looking spikes at the tip of this light that basically tell you, “Jab me into a bad guy.” 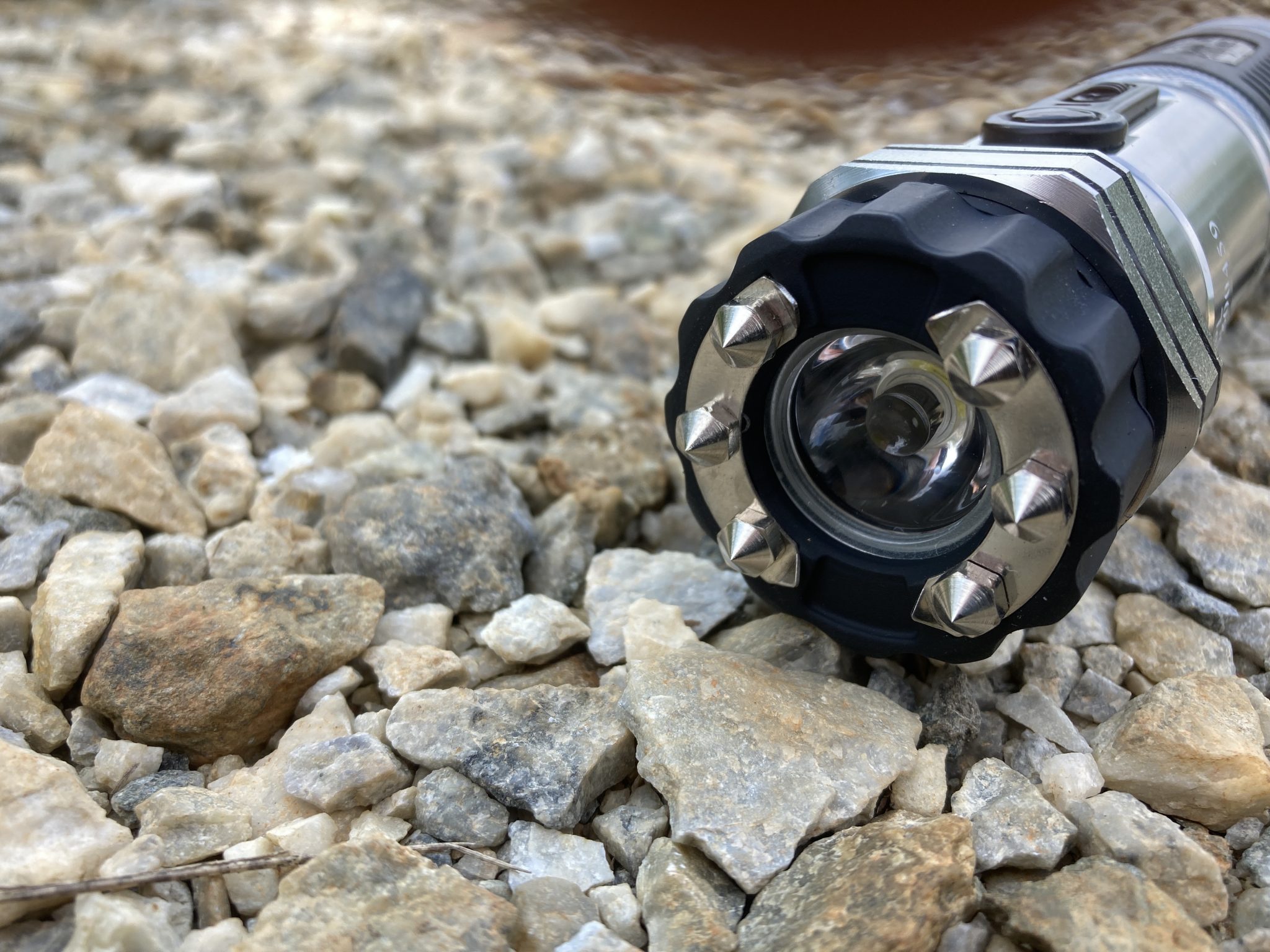 As soon as you pull this light out to use it, the bad guy is going to know that you have a shocky stick, and he’s likely going to rethink his life choices. To activate the light, as mentioned above, all you have to do is push the light button all the way forward (a good button layout, I think, because you would have a hard time pushing it halfway like the light feature is situated), and then press the big, black button. 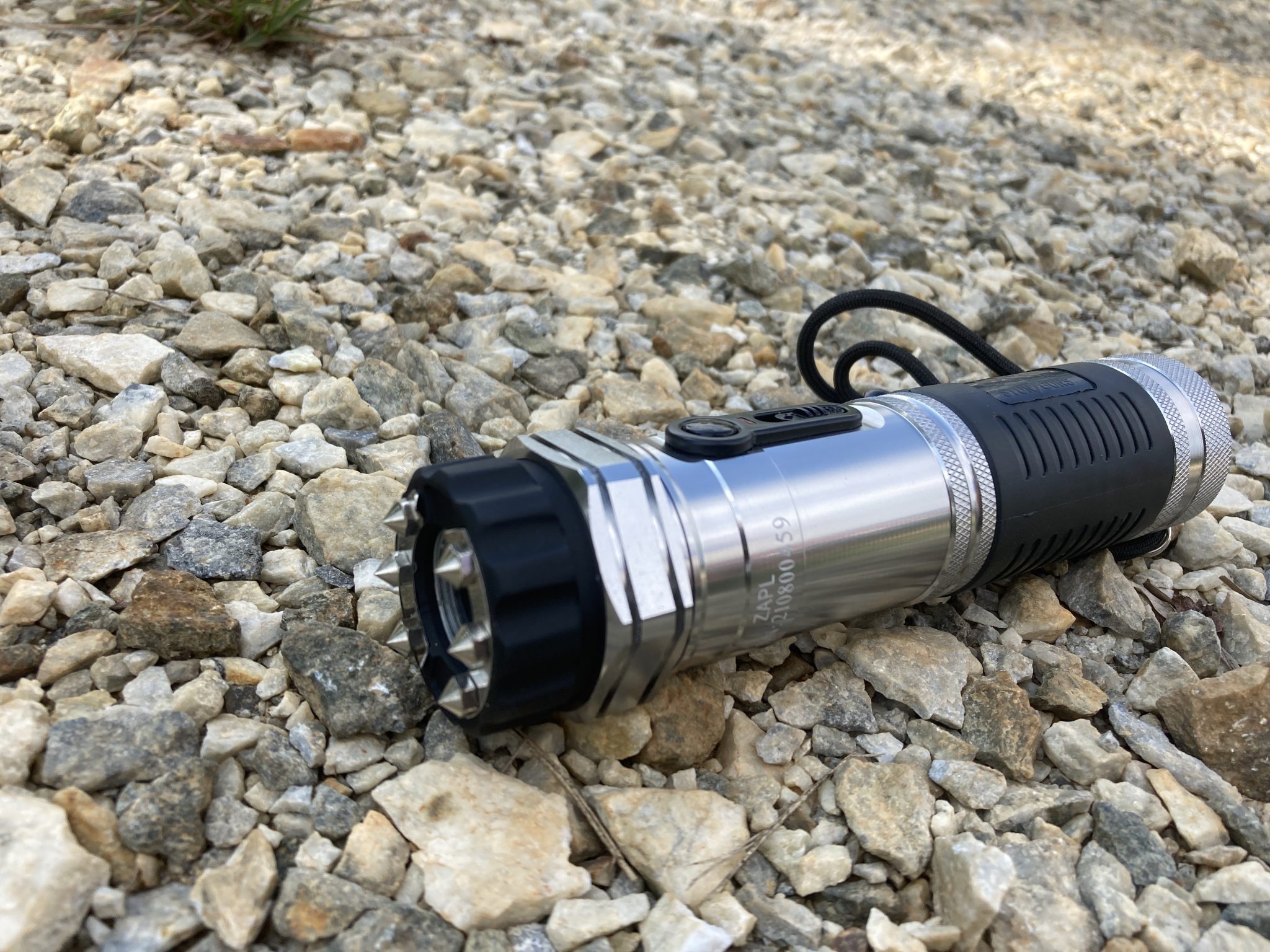 This will immediately cause the tip of the flashlight to let out a very large electric arc that audibly crackles violently. It’s pretty scary.

Thankfully, the light comes with a carrying case that you can attach to your belt as well. The idea of just letting this light sit loose in my pocket doesn’t sit well with my gut. While this may surprise some people, I rather appreciate the notion of being able to walk down the sidewalk without suddenly collapsing to the ground in excruciating pain as my pocket taser electrocutes my leg.

But, hey, I’m from The Beautiful South. We’re rather particular about things like that. Perhaps things are different where you live. 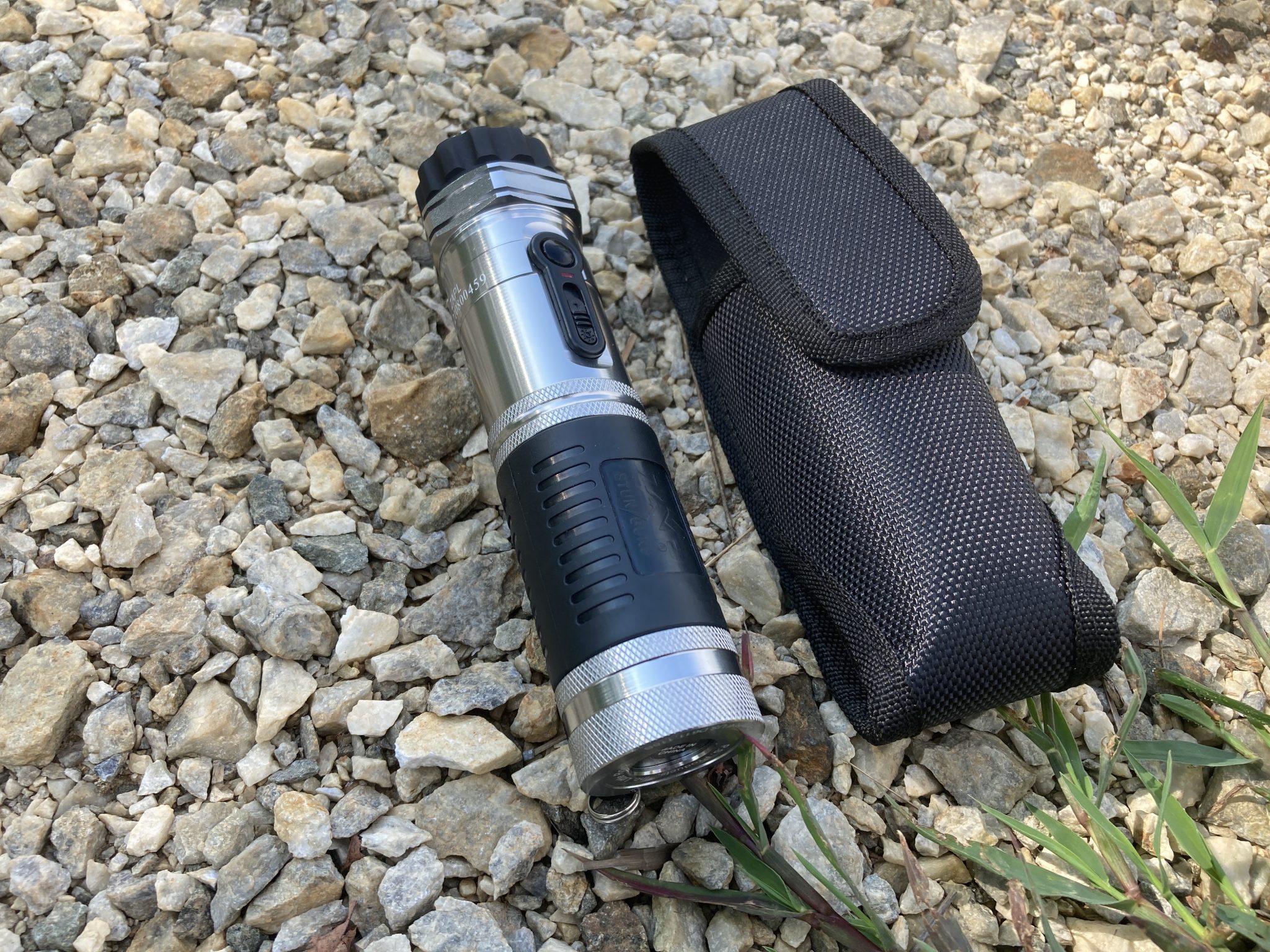 There’s absolutely no way that you could carry this on your belt, though, without it looking as if you’re carrying an extendable baton on your hip. The profile is unmistakable. If you’re in a situation where you really don’t care if somebody sees you with a weapon on your hip, go for it. If you’re looking for a bit more “discretion” then I’m not really sure what you’re going to want to do here. Perhaps a coat pocket?

I do have a few further thoughts on the Taser brand light.

I question how far you would have to jab the Taser brand light into somebody’s skin for the metal to actually make contact as well. It’s recessed down in there further than I would have expected. Again, I didn’t actually get the chance to physically test this on anybody (they all turned me down), so maybe that distance doesn’t matter, but it is something I wonder about. 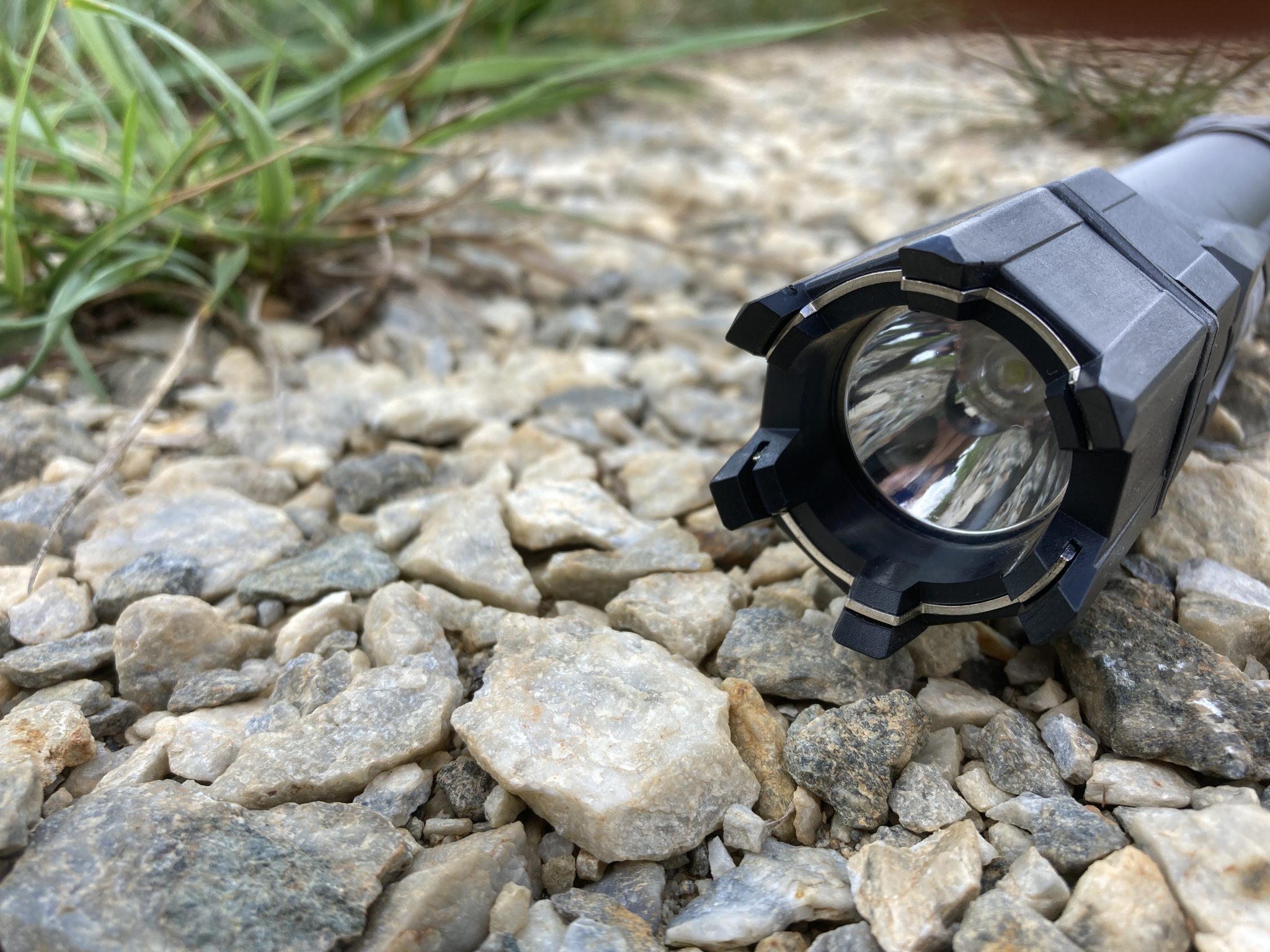 My final thoughts on non-lethal self-defense?

I definitely think that the concept is well worth your mulling over. You give yourself the ability to defend yourself in a variety of different ways with such and choose the level of escalation you’re going to resort to. If you’re comparing between the two above options, however, I recommend the ZAP light, hands down. The Taser model simply wasn’t reliable. There were far too many times that I pressed both buttons only to have nothing happen. Perhaps it was just a defective product I received, but I still think the design of the ZAP is superior.

If you’re looking for other options, check out an extendable baton (they are illegal in some areas, so buyer beware), look into various pepper sprays, and definitely check out the shock light I mentioned above. It’s a valid concept that could easily help to keep you safe.

What are your thoughts? Have you ever tried either of these taser flashlights? Have you ever actually used a taser on someone? Tell us about it in the comments section. (1stMarineJarhead, maybe you could fry up some rutabagas with these!)

(Want uninterrupted access to The Organic Prepper? Check out our paid-subscription newsletter.)

Aden Tate is a regular contributor to TheOrganicPrepper.com and TheFrugalite.com. Aden runs a micro-farm where he raises dairy goats, a pig, honeybees, meat chickens, laying chickens, tomatoes, mushrooms, and greens. Aden has four published books, The Faithful Prepper,  An Arm and a Leg, The Prepper’s Guide to Post-Disaster Communications, and Zombie Choices. You can find his podcast The Last American on Preppers’ Broadcasting Network.

The post Are Taser Flashlights Worth The Money? appeared first on The Organic Prepper.