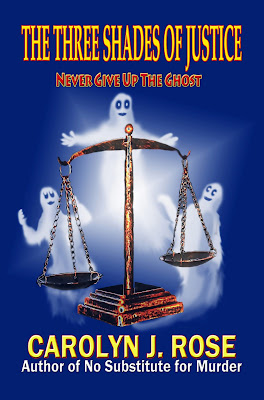 Carolyn J. Rose grew up in New York's Catskill Mountains and emerged from the University of Arizona with a degree and a tan. Following two years with Volunteers in Service to America, a series of coincidences and chance encounters led her to TV news and 25 years as a researcher, writer, producer, and assignment editor in Arkansas, New Mexico, Oregon, and Washington. Her substitute teaching experiences and her sometimes rocky relationship with dogs led to the Subbing isn’t for Sissies series and the creation of the canine character called Cheese Puff. Other than writing, her interests are reading, swimming, walking, gardening, and NOT cooking. Learn more about Carolyn and her books at her website.

Taking a Literary Leap and Writing What I Don’t Know

For many years I took the advice “write what you know” to heart. I set mysteries in the Catskill Mountains where I grew up, and on the Oregon Coast where I often vacationed. During my 20 years as a high school substitute teacher, I wrote a 13-book humorous mystery series featuring a younger, smarter, thinner, and more catastrophe-prone version of myself.

But last year, as winter closed in and the lockdown continued, I considered writing about what I didn’t know. The choices were almost limitless. I don’t know how to pilot a jet or perform brain surgery. I don’t know about life in Haiti or Honduras or Hungary. I don’t know much about physics or pastry or pottery. I know next to nothing about alchemy or actuarial tables or advanced algebra.

Now, I like to think I’m a fairly bright person. But I’m in my seventies, and brain cells seem to be departing from the interior of my skull at an alarming rate. Could I learn enough about a fresh topic or skill to write in a credible manner? Or would I be called out by readers who know far more than I do?

For the record, as a reader I often feel a guilty thrill of pleasure when I spot a protagonist displaying ignorance about a subject I grasp. But, as a writer, I cringe when I receive an email from a reader who caught me with my smarty-pants down.

To avoid that shame and embarrassment, I decided to pick a topic that would allow me to fictionalize for 400 pages without doing more than a lick of research. The topic I hit on was ghosts. The book I wrote is The Three Shades of Justice: Never Give Up the Ghost. It centers around three elderly women killed in a car crash who return as ghosts to help their friend Emma Preston oust the shady assistant administrator of their senior residence.

But first they have to learn how to develop their powers so they can get more than a few feet from Emma. It’s a steep learning curve and they’re easily distracted by the disposition of their worldly goods, the selection of their urns, the dog and cat now in Emma’s care, their desire to don outfits other than the ones they died in, and Emma’s growing friendship with Spencer Rutledge.

Although glad her friends are still with her, Emma is not so delighted when they read her thoughts and invade her privacy. She’s even less pleased when they bicker, quibble, butt in on conversations, badger her to eat their favorite foods, and persuade her to take in an orphaned parrot.

Writing this book let me play a months-long game of What If? and speculate wildly about ghosts, their potential powers, and whether the personalities they had in life would carry over to their afterlives. I asked myself who they might haunt, who might be able to see them, and whether their time as ghosts might be limited. And then I made up the answers.

But, although knowledge and accuracy weren’t issues when it came to ghosts, there were other things I wanted to get right. So I pointed and clicked my way to sites with information about meringue, night-vision goggles, funeral urns, what parrots eat, and the full names of four former First Ladies.

In the process I learned a lot. Will I remember it next week? Doubtful. Like I said earlier, too many brain cells are, well, giving up the ghost.

The Three Shades of Justice: Never Give Up the Ghost

Killed in a car crash, they return to their senior residence to take care of unfinished business—getting the goods on the malicious assistant administrator. Sadye Connor has been stealing supplies and skimming accounts; now she’s upping her crime game.

Stubborn and opinionated in life, Eddie, Ida, and Loren are no different in their afterlives. Instead of honing their haunting skills, they bicker about strategy, blow off training, belittle teamwork, and badger Emma about the quality of their urns and the care and feeding of their entitled pets. Worse yet, they read her thoughts, butt in on conversations, and allow her no privacy to pursue a budding romance.

Can Emma wrangle the wraiths in the direction of detection in time? Do the Three Shades of Justice have a ghost of a chance of stopping Shady Sadye? Or will the ectoplasm hit the fan?