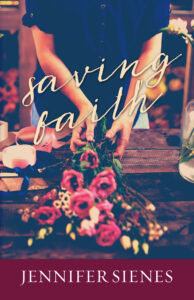 Hearts and flowers might pay the bills, but that’s all they’re good for.

After all, she has quite the past to atone for.

Then her little sister decides to get married, and everyone but Faith chooses her for the job of coordinator. The family florist is the perfect choice. Right? Overruled, Faith agrees.

Enter a widower and his precocious daughter. A friendship with Michael Jacobs becomes more than a refuge in stress of wedding preparations. It becomes a catalyst for her entire life.

Hiding from her past hasn’t worked until now. Perhaps Michael is right.  Facing it is exactly what she needs if she has any hope of a real future.

Faith never would have imagined that her grudging agreement to help her sister could become an olive branch between herself and her family—and the Lord.

Jennifer Sienes is a favorite author of mine, I have read many of her books. I am always excited when she releases a new book. Her latest book, Saving Faith, is my most recent read!
Faith Nicholson made some mistakes in her Youth and she still feels the disappointment from her parents. Faith decides she wants to be successful in life and opens a Florist Business. Her little sister announces her Engagement and is looking forward to getting married. Faith is picked to be the Wedding Florist. She tries to deny the honor, but everyone thinks she should do the job, so she reluctantly agrees. Faith meets a young widower and his little Daughter. Pastor Michael Jacobs becomes a friend to Faith and she is enjoying their friendship. Faith tells him about her past and she believes he has some wise advice. He advises her that maybe it is time to face her past and not keep hiding from it. Faith begins to see the read wisdom in that. Will Faith be able to "FACE" her past? Will she see reconciliation and forgiveness from her Family and others?
WOW, the storyline sure is PACKED full of greatness in such a short novella. The book is only 124 pages long, but the author did a GREAT job at keeping the storyline focused. I could not put this book down once I began reading it. The main Characters, Faith and Pastor Michael, sure have a great story. I think many could relate to Faith in that we all may have at one time or another, had a situation in our life that "dragged us down" or made us "prove ourselves". Some may have also lost our faith in God during that time. I really like how the book was encouraging while telling Faith's story. I also really LOVED how Faith trusted Michael and how their friendship evolved into a Romance. The author did a wonderful job at showing the Christian message throughout the book. Saving Faith is a book about forgiveness, moving forward, new relationships and so much more. FANTASTIC BOOK! 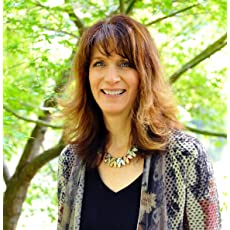 Jennifer Sienes holds a bachelor’s in psychology and a master’s in education, but discovered life-experience is the best teacher. She loves Jesus, romance and writing–and puts it altogether in inspirational contemporary fiction. Her daughter’s TBI and brother’s suicide inspired two of her three novels. Although fiction writing is her real love, she’s had several non-fiction pieces published in anthologies–two in Chicken Soup for the Soul. She has two grown children and one very spoiled Maltese. California born and raised, she recently took a step of faith with her real-life hero and relocated to Tennessee.

Where does inspiration come from? When I wrote Illusions and Providence (books 2 and 3 of my Apple Hill series) it came from real-life tragedies I’d lived through. The characters and stories were pure fiction, but the inspiration was heartfelt and dark—just where I needed my emotions to be in order to write redemption stories. When I wrote Surrendered (Book 1) in the series, the inspiration came from one character that was eventually deleted in the second draft of Providence. Are you confused yet? Just to set the record straight, although Surrendered was the first book published in the series, it was the last one I wrote. Why they were published in the order they were is unimportant.

Saving Faith is unlike any other book I’ve written. It was the first novella I wrote in the series, although it isn’t the first to be published (are you sensing a pattern?) I’ve since written two Christmas novellas, both based on side characters introduced in my novels. All That Glitters released last November starring two characters from Surrendered—Julia and Marty. Wish Upon a Star will release this coming November, and the main characters are Elaina and Ryan from Providence.

But the characters in Saving Faith were created from thin air. Well, mostly. Although Addie Jacobs is a side character, she was inspired by a little girl in my Sunday School class—adorable, precocious, intelligent, and headstrong. Once I had her in place, the rest of the novella came together. It was also the first book I’ve written without plotting it out in advance, which was quite disconcerting for a control-freak like me. It was as if the Holy Spirit introduced me to the story as I wrote it. I’ve heard of those pantsers (they write by the seat of their pants rather than outline the plot), but until Saving Faith, I’ve never been successful at winging it. To be perfectly honest, I wasn’t the main writer; I was just the co-pilot. I believe the story of Faith, Michael, Chloe, and Addie is better for it.

Another first for me was writing a story where romance was the main genre. I write women’s fiction with an element of romance. But Saving Faith is a romance with an element of women’s fiction. This set the bar for my other novellas. It’s these shorter books that allow me to delve into the world of romance, although it’s not the typical boy-meets-girl kind of story. It’s more boy-knows-girl and loves her anyway kind of story. Because truth be told, none of us are loveable without the redemptive work of Jesus Christ.

Cats in the Cradle Blog, August 30

For Him and My Family, September 2

Because I said so — and other adventures in Parenting, September 6 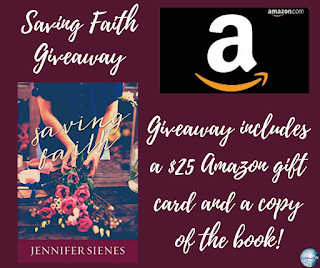 To celebrate her tour, Jennifer is giving away the grand prize package of a $25 Amazon gift card & a copy of the book!!

Be sure to comment on the blog stops for nine extra entries into the giveaway! Click the link below to enter.