I'm back in Christmas Town, Maine, with some of my favorite writers. Want to meet some of them? Read on and learn some new things about Cari Lynn Webb, Leigh Riker, and Anna Adams! - Liz

Tell us a little about your characters in your story in Christmas Town Homecoming.

Cari:  The Candy Cane Contingency features best friends, Becca Jacobs and Owen Price. Back in high school, Becca and Owen made a pact. If they were not married by their ten-year high school reunion, they'd marry each other. Well, the ten-year reunion has arrived and they're both still single. But everyone knows back-up plans are nothing more than empty promises and silly things kids say. Or are they?

Leigh: In my story for Christmas Town Homecoming, “Silver and Gold,” Dakota Moore was the star ten years ago of the school's swim team. But her dreams of Olympic gold were shattered when at the games in London the next year Dakota was disqualified. Humiliated then, she still believes she let down the people in her hometown who had been so proud of her—especially her biggest supporter, Kieran Gardner, Dakota’s longtime crush. That hadn’t ended well either.

Kieran, a math nerd, was the polar opposite of super-athlete Dakota years ago, and it always amazed him that they’d become such good friends. But to want more of their relationship then? That didn’t seem like a good idea and Kieran made a bad mistake. Still, a decade is a long time. Now the owner of a successful college prep firm specializing in STEM subjects, he’s trying to decide whether to expand his business in Boston or stay in the hometown he loves. Maybe this high school reunion will help him figure that out—and it could be Kieran’s one chance to tell Dakota how he still feels.

As the high school gym's decorations sparkle and glitter, a gorgeous, softly lit Christmas tree adorns the space, and the dancing begins at the reunion’s final event, in such a romantic setting can these two get their chance at love after all?

Anna A: In The Magic of This Place, Cait Dancer, the one most likely to succeed, returns home a failure in her own eyes, but never in the man she left behind. Gabe Palmer, who made his own mistakes when they loved each other, still loves Cait enough to help her find a new--and glorious Christmas Town start.

If you could spend time with a character from Christmas Town, who would it be and what would you do?

Leigh: I can’t pick just one. I’d love to check out the holiday windows at Dockery’s Department Store then go shopping for presents with Cara, Jill, Holly (who appeared in my previous Christmas Town novellas) and, of course, Dakota.

Anna A: Since I love all the stories that come from Christmas Town, I'd like to spend some time with Santa and discover all the secrets he's keeping for the characters I have yet to meet!

For those who don't already know you, tell us what your writing/author journey has been.

Cari: My author journey began as a secret. I wrote my first manuscript without telling anyone. When I finished, I showed my husband and asked if I should keep on writing. He said definitely and with his support I kept on writing, learning the craft, and dreaming. Fast forward through more manuscripts, a large collection of rejections and a deep desire to be published, I met the people who would become my writing tribe thanks to a Saturday writer's meeting at a clubhouse in Sacramento. What started as a critique group turned into strong friendships and because of Anna J. Stewart and Melinda Curtis, my publishing journey began. And Anna and Melinda have helped me through every book I've written since that first one - to say I'm blessed to have them in my life is an understatement. My journey would not be the same without them in my corner. To anyone who is pursuing a writing career - don't ever give up and find your tribe. Surround yourself with the people who will support your dreams and help you grow. You won't regret it.

Leigh:  My writing journey has been a blast—and quite varied. I knew early on that my dream job would be as an author. I started my career writing short stories, but since then I’ve written glitz and glamour, women’s fiction, romantic suspense, chick lit, and romantic comedy. Obviously, I like a challenge!

I’m currently doing a Western series that I love, Kansas Cowboys, for Harlequin Heartwarming. The latest title, A Cowboy’s Homecoming, came out in July, and I’m just finishing the first of two more books (working title Millionaire Cowboy) in that series.

Anna A: My name is Anna Adams. I've written for Harlequin Superromance, Harlequin Heartwarming, and I love writing stories from Christmas Town with some of my own favorite writers!

What did you enjoy most about writing this Christmas Town story?

Cari: The Candy Cane Contingency was fun to write because I was ready for a little Christmas cheer done Christmas Town style. I liked the idea that all these characters were connected for this one weekend in Christmas Town and who doesn't love a high school class reunion. And pretty much any time I can visit The Knotty Elves, I'm happy.

Leigh: I had such a good time writing “Silver and Gold” for this new Christmas Town anthology. After ten years, Dakota still felt like an Olympic failure, and giving her a fresh take on her life and her relationship with Kieran, who has grown up very nicely, was not only fun but satisfying.

Anna A: The past year and a half has been hard for my family as it has been for yours and everyone we all know. Writing has been hard, too, and this visit to Christmas Town made me remember how much I crave stories of compassion and hope and real love.

Describe yourself in five words. 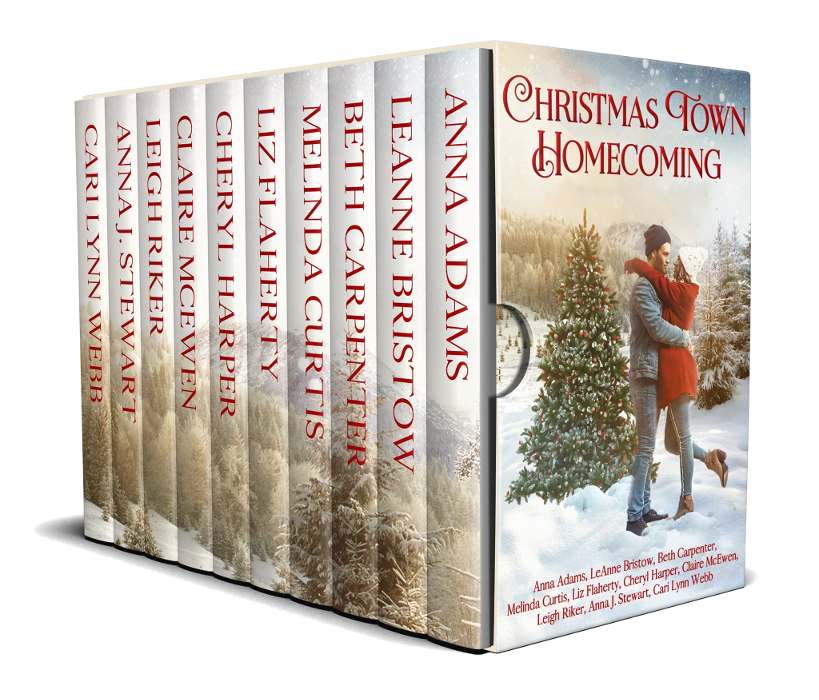 It’s going to be a jam-packed holiday weekend for the returning class, beginning with preparations for the two day event – where a mysterious promise ring has been found in their time capsule – and culminating in a Reunion Ball – where something lost finally finds its home. No one’s expecting to discover love, but this is Christmas Town, where happily-ever-afters are delivered with holiday traditions, glowing twinkle lights, and tinsel.

Consider this your invitation to the reunion where you’ll have a front row seat next to some of the class’s most memorable members – the prom queen, the jock, the mean girl, the drama kid, the teacher’s pet, the bad boy, the math nerd, the girl most likely to succeed, and some of your favorite administrators. From start to finish, this collection of connected, sweet romances from Harlequin Heartwarming authors will warm your heart.