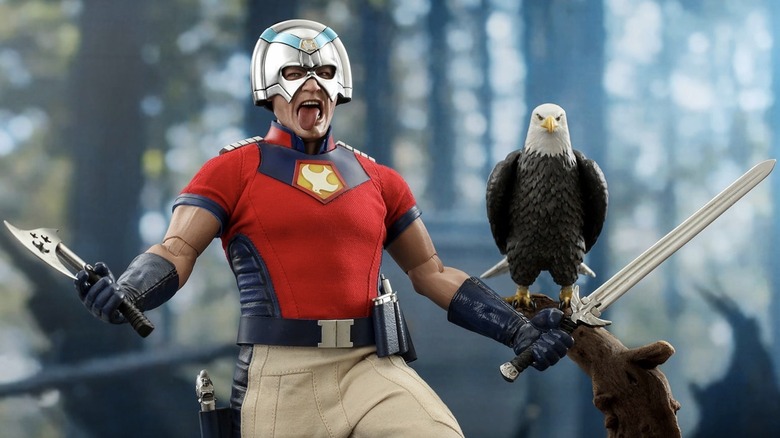 You know you've made it when they make an action figure of you with an "attachable tongue for alternate expressions." Going by that standard, John Cena has most assuredly made it and is living his best superhero life. Soon, you'll be able to add a Peacemaker figure with Cena's "authentic and detailed likeness" to your collection. And yes, Eagly is included, and his wings are spreadable.

"Peacemaker" wrapped up its first season on HBO Max last week, and it has already received an order for a second season, with creator James Gunn set to direct every episode next time. While you wait for more episodes to come down the pike, you can also look forward to the release of the new Peacemaker collectible figure from Hot Toys (via The Toyark). It's over a foot tall, built to 1/6th scale—31.5cm, to be exact. In addition to the tongue, it comes with an interchangeable chrome helmet and six interchangeable hands (a pair of fists, naturally, as well as "relax hands" and "weapon holding hands.")

The Peacemaker figure comes with 30 points of articulation, which means it's posable, and perhaps even huggable.

Do You Wanna Taste It? 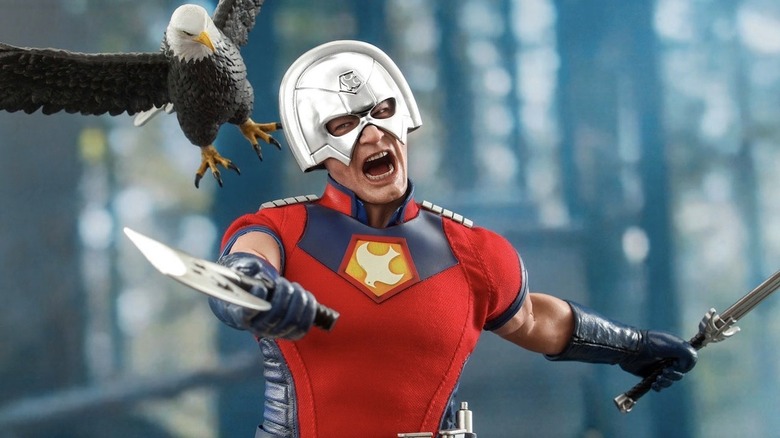 Here are the full details for the Peacemaker collectible figure from Hot Toys. Please note that it only comes with the (1) attachable tongue, so you'll want to safeguard that thing. Put it in your back pocket, but don't sit on it ... unless. Well, what you do with it after hours is your business. (Cue Wig Wam's "Do Ya Wanna Taste It.")

– One (1) attachable tongue for alternate expressions

– Body with over 30 points of articulations– Approximately 31.5cm tall– Six (6) pieces of interchangeable gloved hands including:

– One (1) pair of weapon holding hands

– Each piece of head sculpt is specially hand-painted

– One (1) pair of navy blue-colored gauntlets

– One (1) pair of beige colored pants with navy blue patterns

– One (1) utility belt with silver buckle

The Peacemaker figure from Hot Toys will be available for pre-order soon, and is expected to release sometime in the second or third quarter of 2023.

Read this next: The 15 Best '90s Horror Movies Ranked

The post Cool Stuff: The Peacemaker Hot Toys Figure is a Certified Maniac, and Eagly is Included Too appeared first on /Film.