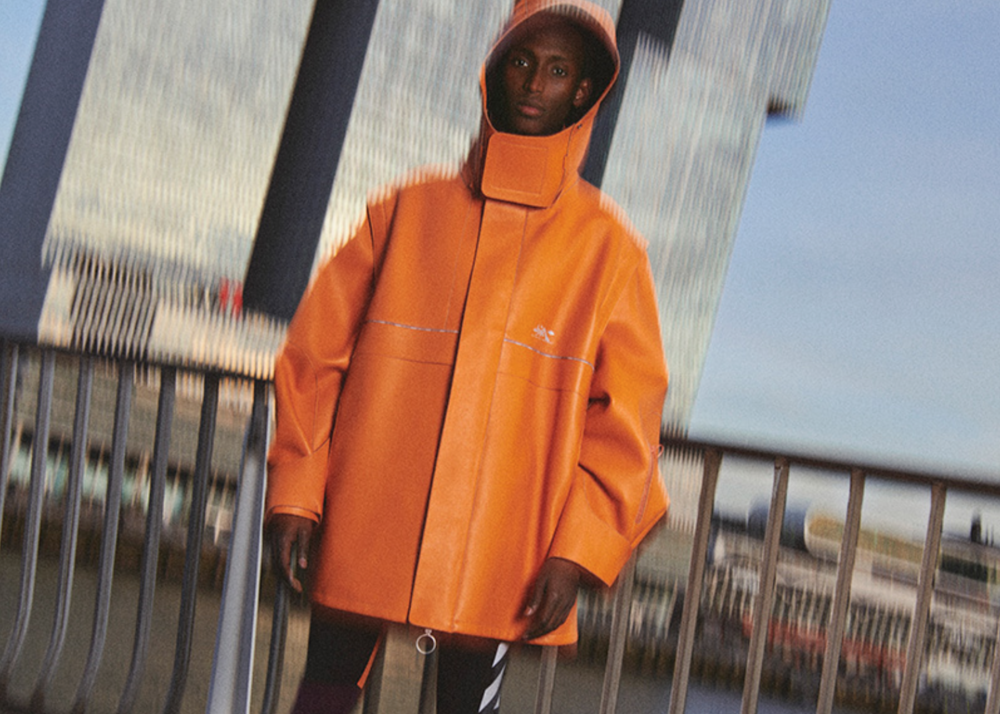 In July 2019, just a month after Virgil Abloh sent his Spring/Summer 2018 collection for Off-White down a dimly-lit runway at thePitti Palace in Florence, complete with all of its usual trademark touches (zip ties, quotation marks, logos, etc.),Helly Hansen filed suit against Off-White. The Norwegian sportswear brand, which has operated in the U.S. for more than 40 years, argued in its complaint that Ablohs wildly popular brand had adopted a logo that is confusingly similar to its HH Stripe Logo, and had been using that logo on goods that are the same and/or similar to the goods/services offered by Helly Hansen.

Far from being a coincidence, Helly Hansen claimed that Off-White adopted a lookalike striped logo that mirrored the one that Helly Hansen has been putting on its famed outdoors gear for decades with knowledge of, and the intent to create a false suggestion of an affiliation or connection between [itself] and Helly Hansen, where none exists. Alternatively, Hansen argued that Ablohs brand adopted a lookalike pattern in order to trade off the goodwill of Helly Hansen and its HH Stripe [mark]," which consists of "parallel striping of white and another contrasting color that appears on the shoulder and sleeve of shirts and on the outer seam of the pants."

Setting the stage in an amended complaint in February 2019, Hansen pointed to Off-White and Ablohs alleged history of infringement and unfair business practices. These allegations took the form of a laundry list of instances in which Abloh and Off-White have been accused of hijacking others designs. For instance, Hansen asserted that in March 2018, [Abloh] was accused of 'knocking off the shoe designs of Amsterdam Warehouse co-founder, Elisa van Joolen. After that, in May 2018, the Off-White founder was in the spotlight for copying a chair design that is part of [his collaboration] with IKEA.

Hansen continued: In June 2018, in an article entitled, Another Day, Another Stolen Design by Virgil Abloh, [Abloh] was accused of copying a triangular hoodie design from Japanese label ANREALAGE. Moreover less than a month later, Mr. Abloh was accused of swiping the crossed arrows logo used by Off-White [from a logo] . . . designed in 1965 by Kinner, Calvert & Associates, a UK-based design group. And still yet, Hansen asserted that inAugust 2018, [Abloh] was also accused of copying graphic designer AG Fronzonis work from 1966 in his menswear collection.

Still going, Hansen claimed that Abloh has even confirmed that his first solo foray into fashion which came by way of Off-Whites predecessor company, Pyrex Vision was shuttered because [he] legally cant use the name Pyrex anymore [due to trademark issues].

Against that background,Hansen argued that Off-White adopted a logo that is confusingly similar to Helly Hansens HH Stripe Logo, and was using it on the same types of products that Hansen sells.As a result,the 144-year old outdoor apparel maker set forth claims of trademark infringement, and unfair competition against Off-White, and accused the brand of violating the Illinois Uniform Deceptive Trade Practices Act, all while seeking monetary damages, and preliminary and permanent injunctive relief, which would serve to bar Off-White from using the allegedly infringing logo. 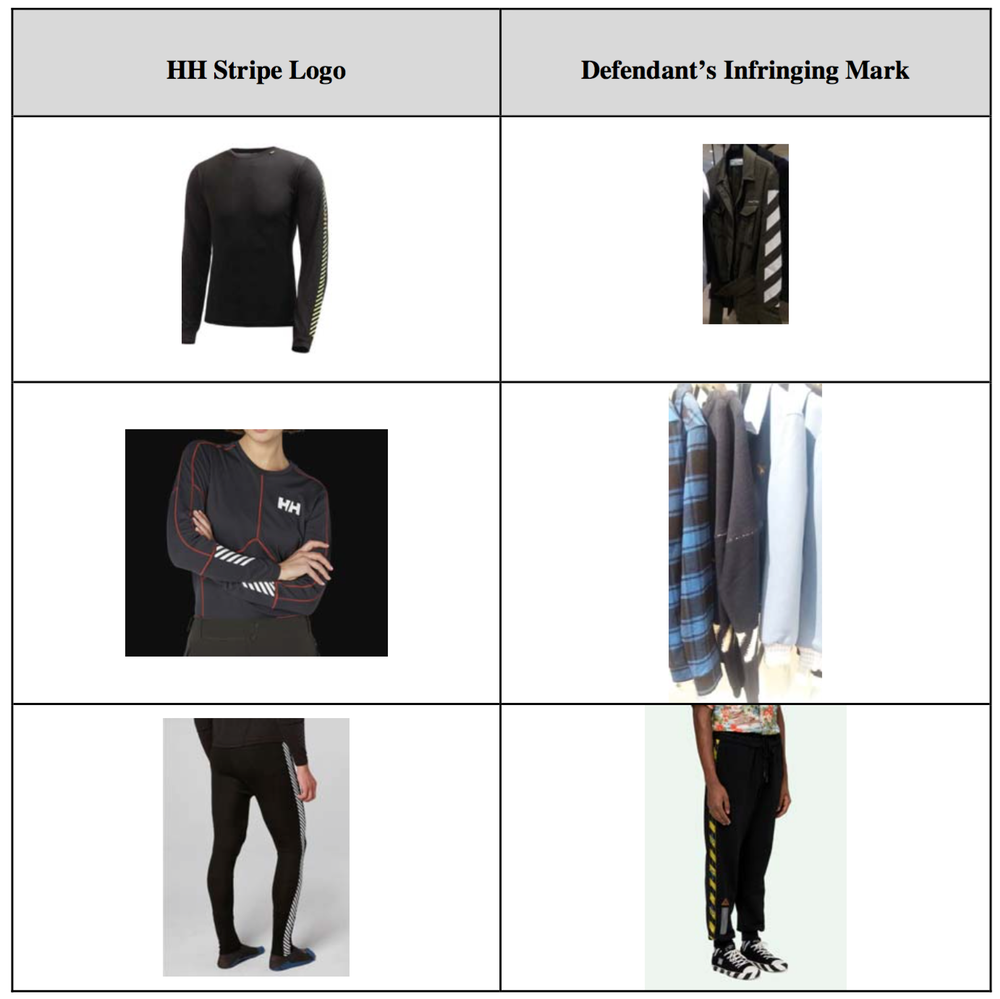 Now, a year and a half after Hansen first filed suit, counsel for the two parties have told an Illinois federal judge in a joint notice and motion that they have agreed in principle to settle the case, and are in the process of preparing a Settlement Agreement and Stipulated Dismissal, which they intend to finalize in the near future.

The settlement which will almost certainly remain confidential will serve to put the lawsuit to bed. However, there is more to the parties fight than that: also in the mix are separate but related trademark proceedings underway before the U.S. Patent and Trademark Offices Trademark Trial and Appeal Board (TTAB).

Shortly after Helly Hansen filed suit against Off-White in July 2018, counsel for Ablohs brand initiated a proceeding with the TTAB in an attempt to cancel one of Helly Hansens federal trademark registrations. According to its December 2018 filing, Off-White asserted that Hansens registration for parallel striping of white and another contrasting color [that] appears on the shoulder and sleeve of shirts and on the outer seam of the pants for use on clothing should be partially cancelled or restricted because it is ambiguous, vague, and overly broad.

In its filing, Off-White pushed for the TTAB to force Helly Hansen to amend the description of its trademark as reflected in the registration toconsist exclusively of parallelhorizontalstriping of white and another contrasting color [that] appears on the shoulder and sleeve of shirts and on the outer seam of pants. Such a modification would obviate the likelihood of confusion claims that Hansen made in its lawsuit against Off-White, counsel for Off-White asserted.

A few months later, Helly Hansen responded by filing a cancellation proceeding of its own, taking issue with Off-Whites trademark registration for fifteen alternating parallel diagonal lines of varying sizes forming the shape of a rectangle for use in connection with retail store services featuring apparel, footwear, fashion and clothing accessories, among other things. According to Hansen, Off-Whites striped trademark so resembles [Hansens] marks as to be likely, when used in connection with [Off-White] goods and services, to cause confusion, mistake, or deception [among consumers] therefore, creating a confusingly similar commercial impression.

Ultimately, both TTAB proceedings were suspended pending the outcome of the lawsuit that Helly Hansen had filed against Off-White. While it is not yet clear whether the terms of the parties impending settlement agreement in the infringement case will extend to their rival TTAB proceedings, if the outcomes in similar cases are any indication, they very well might.