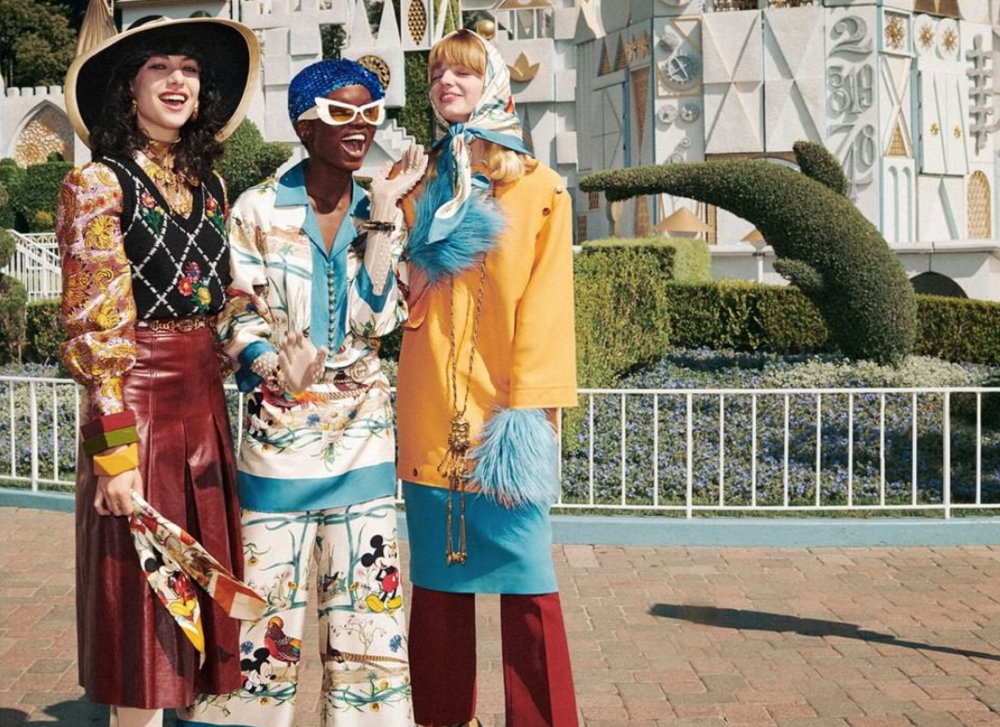 Disney is not just for kids. That seemed to be a clear takeaway when Gucci sent a $4,500 plastic purse in the shape of Mickey Mouses head down the runway at Le Palace in Paris as part of its Spring/Summer 2019 collection. As it turns out, the appearance of one of Disneys most well-known characters in the Italian fashion brands collection alongside spandex-y leotards, hot pants, and pink sequined trousers for its gender-bending men and wildly-colored feathered frocks and leather skirt suits for the Gucci girls coincided with the 90th birthday of Disney's Mickey Mouse in 2018.

More than merely a tribute to the nearly 100-year old character that kick-started the nearly $200 billion empire that is Disney, Guccis ode to Mickey Mouse, which has since been followed up by another, recently-announced tie-up between the two companies (this time to coincide with the Chinese New Year) was a show of the multinational entertainment giants multi-faceted quest to appeal to individuals of all nearly ages and spending brackets.

Disneys ability to reach a wide pool of consumers goes beyond the immediate attraction of its parks and resorts, and the films and other media it offers. It caters to everyone from Frozen-loving children to luxury goods-seeking millennials and Gen-Xers, in part, thanks to its arsenal of licensed goods, the third-party products that bear the names and/or images of the assets that fall under its umbrella, whether that be franchise titles, film names, or pictures of the characters, themselves.

These goods which serve as a noteworthy driver of some of the Walt Disney Companys annual revenues of almost $70 billion are born from licensing deals that see Disney trade off the right to use its intellectual property (generally) in exchange for a lump sum and royalty payments based on sales of those licensed goods. And the sales are high. Disneys licensed products are such a draw amongst consumers that they generated nearly $60 billion in retail sales in 2018, making Disney the largest licensor in by sales volume in the $270 billion-plus global retail licensing market.

While the Burbank, California-headquartered company does not routinely break out the tens of billions of dollars in revenue that are earned each year as a result of licensed goods by individual property, it is widely understood that a few key assets top the list of highest-earners. For instance, Bloomberg reported in December 2015 thatprincess merchandise, alone from dolls and toys to clothing and home dcor is a $5.5 billion enterprise and Disneys second-most-profitable franchise. That figure, the publication stated, did not even take into account the Frozen franchise. (In connection with the 2013 princess-centric film, which added a part 2 in 2019, licensees sold $531 million worth of dolls and dresses in a single year in 2014).

But even a frenzy of Frozen products does not usurp the power of Disneys top seller, which is, according to Bloomberg: Mickey Mouse, who has been big business almost from the outset. Within 5 years of Mickey Mouse making his debut in Walt Disneys 1928 animated shortSteamboat Willie, Disney was raking in$1 milliona year in [Mickey-specific] merchandise sales (equivalent to $19 million in 2019 dollars), according to Fast Co. Almost 20 years later, Kay Kamen, Disneys first-ever licensing agent, told the New York Times that business was good. No doubt about it, she revealed. Mickey Mouse is the greatest thing in the history of merchandising.

Disney has since added a tremendous amount of assets to its roster, some of which it dreamt up in house, and others that it acquired from others. One franchise that comes to mind? Star Wars, which, as of the 2015 release of its newest at the time Star Wars: The Force Awakens stood to change the ratio of Disneys top-earning licensing properties, per Bloomberg. Back in 2015, analysts predicted that Star Wars licensing deals would generate $3 billion in sales, alone, with that number expected to rise to $5 billion for 2016.

After all, Star Wars merch is a hot commodity for Disney, which acquired Lucasfilms intellectual property in 2012 for $4.05 billion. In bringing Star Wars under its ownership wing, Disney amassed a large pool of license-able assets, from the wildly valuable Star Wars trademarks to the names of its characters and their copyright and trademark-protected appearance. And these Star Wars-specific elements are readily translated into high fashion examples (red carpet favorites Kate and Laura Mulleavyworked classic Star Wars imagery into their couture-like creations in 2014, and London-based labelPreen did the same) and the usual mass-market endeavors, such as t-shirts from Hot Topic and Target, alike.

More than merely gaining rights in the characters and insignia associated with the iconic space-opera franchise, in acquiring Lucasfilm, Disney gobbled up the production company that has by many accounts transformed the market for movie merchandise since its launch in 1977. That is howVoxs Terry Nguyan put it recently,echoing Fortunes Matt Vella, who wrote a few years prior that beginning in the 1980s, George Lucas and his long-time licensing chief Howard Roffman more or less invented the playbook that major media companies, Disney chief among them, now depend on.

A big part of the prowess of the Star Wars licensing arm is its focus on selling to fans of the franchise no matter their age. George [Lucas] knew the audience [of original Star Wars fans] was going to age and grow up, Roffman said in an interview in 2018. Given the cult-nature of the Star Wars franchise, "We realized we could make products that were of interest to an older audience which is what gave birth to a whole line of novels, comic books, video games and, eventually, as that group of young adults began getting married and having their own children, it became very important for them to share Star Wars with their children."

Disney has also excelled at this. In addition to introducing and/or acquiring new blockbuster franchises, whether it be Frozen or the various Marvel movies, it employs an extensive network of marketing magicians to dream up new tactics to keep the brand culturally relevant,Faran Krentcil wrote in 2018 for BoF. Among the most effective: connecting content and commerce through emotional threads. (Nostalgia-happy millennials, anyone?)

Beyond that, Disney relies heavily on licensing partnerships, such as those with Gucci or Sephora or Supreme (the latter of which debuted a small Mickey capsule in 2009) not for purely practical (i.e., manufacturing) purposes, it enlists the help of third-parties to ensure the enduring relevance of its intellectual property assets over time, including by bringing them to audiences that range in age and discretionary income. This helps to explain why Mickey Mouse and co. continue to find a home in the upper echelon of fashion, whether it beGucci customers or Givenchy ones before that (during Riccardo Tiscis tenure).

As for Gucci, it has seemingly found something of a sweet spot in its ongoing dalliance with Disney, which dates back to (at least) a Donald Duck menswear capsule for Spring/Summer 2017, and has been followed up by the inclusion of Disney references in its Spring/Summer 2019 and Resort 2020 collections, and now, an expansive collection of garments and accessories aimed at catering to Chinese consumers during the new year; the Asia Pacific region is currently Guccis most significant region, generating 37% of sales, after all, according to the Wall Street Journal.

The terms of the parties partnership are, of course, confidential. However, there is clearly money to be made here.

While toys are still Disneys top seller when it comes to licensed goods, per Variety, apparel is also strong, which is in line with trade group Licensing Internationals finding that fashion-centric deals are among some of the most lucrative in the licensing space.In other words, for Disney, this is big business and chances are, the same is true for the entertainment giants many third-party partners given that Disneys characters whether it be Mickey or Donald Duck, its expanding lineup of princesses, or the characters from Star Wars know how to sell.