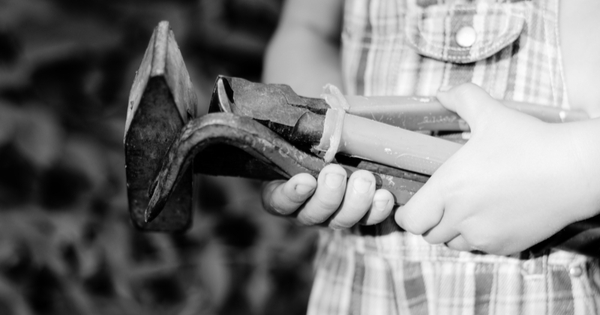 My father decided to cut the garage in half, to turn it into a garage for two-and-a-half cars instead of one. But then he put a huge tarp over it, I didnt see him cut it only heard him banging away in there very mysteriously. On weekends or after dinner.

It didnt look any bigger to me.

And whens he gonna get What is a half car?

The first thing I noticed when he called me to come under the tarpstairs! Because hes making it have a upstairs. With walls and two windows on the back. We had an old fort in the top before, my brothers did, I wasnt strong enough to get up there without a ladder. Stairs and a room and windows! A HUGE fort.

But then I had to help him.

Grumpy all summer, and yelling at me. When he asked for a plane, I took him the largest chisel I could find.

Thats not a plane.

I didnt see any planeyou said you wanted to make it smoother.

Then I took him a plane, the rusted one, I didnt see the new one right next to it.

Then he asked for a quarter-inch drill bit. Thats an eighth-inch!

It says so right on it!

Not easy to make so many mistakes when Dad was too flustered to stop and explain.

Back and forth, back and forth two or three trips for the same thing times a dozen times, I bet. Down to the basement to the furnace room and his workbench, up to the back door, crawling in under the tarp, going up the stairs (the new stairs!) every five or ten minutes when hed bellow my name. I thought I was supposed to be playing.

No wonder my older brothers disappeared. Mostly to play basketball a block away. Not near enough to be called to help.

So then the tarp came off and he stepped on a nail and they came and put up a huge metal door and school was about to start again.

He stepped on a nail, a big board he put up and then took down to measure again but it had a huge naila brad that he forgot and stepped backward and it went right through his shoe and his foot and you could see it starting to come out the top!

I didnt do it, I was there but I didnt leave the board, he wasnt screaming at me.

Right through his foot!

Mom took him to have a shot (he didnt want to go) and now he limps around like John Wayne whos been shot in a cowboy duel or something because John Wayne is his favorite type of movie.

Go get your father for dinner.

Because hed come home from work and change into his paint pants and start before dinner and have to be called sometimes three times, and have to wash up, clean off paint and calk or stuff, and arrive at the table later and later saying,

I wanted to finish the window

Or, I had just one section of flooring

Or, something about the wall or the railing this close to being done.

And then hed wash the dishes to get his hands really clean and since it was still light out go back and get messed up again.

Sometimes til after midnight, I heard my mother telling Aunt Bernice on the phone.

Wears me out just thinking about it.

Limps around like John Wayneand Zane Wayne is his favorite type of writer, he loves Writers Of The Purple Stage and since he cant work on the garage this week (mother wont let him) he reads his book to me every night before bedtime.

Oh, he likes Jack London and Louie Lammer, and hes read me Black Beauty and Swiss Cheese Robinson. Louie Lammer like my brother Lewis but spelled with a Long U, not a Silent E, so Lewis wasnt named for him but more like Lewis and Mark who knew Daniel Boone and Davey Crockett and everybody who died at The Alamo.

Sometimes Dad wont show me the pictures, he says theyre too awful.

Last night was about a Helium Monster that you die if it bites you, and Gary says its worse if the Monster breathes in your mouth because then your voice gets funny and you sound squeaky like Minnie Mouse forever.

Oh, Helium is spelled with a Silent G.

They live in a desert under a rock, not around here. Dad did show me a picture of it and then I was supposed to be ready to go to sleep.

I wasnt sleepy but I guess he was.

The post Helping My Dad appeared first on The Good Men Project.