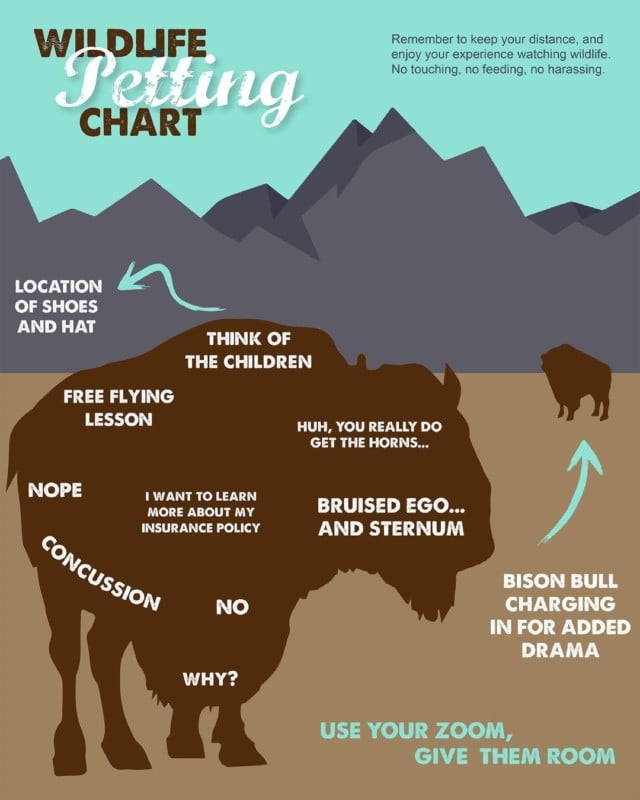 Summer is just around the corner in the United States, and national parks are getting ready for an influx of visitors. As a helpful PSA, the National Park Service just released this humorous “Wildlife Petting Chart” showing where tourists and photographers can safely pet large wild animals.

It seems to be every year that a tourist photographer makes news headlines by getting too close to wild animals and then getting a scare or paying a price.

Just last year, a 72-year-old woman was gored by a bison in Yellowstone National Park after she got within 10 feet multiple times in order to shoot photos. Her dangerous actions were caught on camera by another tourist nearby.

Around the same time, a bison attacked a woman who was photographing it in Custer State Park in South Dakota, ripping off her pants in the process.

Back in 2012, a group of photo-hungry tourists got too close to a bison standing next to the public trail. Without warning, the bison charged and chased a small child around a tree before turning and running away.

⁣Just last month, a woman was caught on camera getting charged by a bear in Yellowstone National Park while she held up a phone at it from a short distance away (and the NPS has opened an investigation into the woman’s identity and actions).

The National Park Service’s guidelines state that tourists and photographers should stand at least 100 yards (91m) from bears and wolves and at least 25 yards (23m) from all other animals, including bison and elk.

You should also never feed wildlife, as animals that have become dependent on human food may become aggressive toward humans and need to be killed.

Wild animals losing their fear of humans is something that’s taken very seriously by authorities, and therefore it’s something photographers should also be wary of. In 2013, a photographer in North Carolina’s Great Smoky Mountains National Park was caught on camera getting into a headbutting match with an elk that approached, despite the man originally positioning himself at a safe distance.

The elk was subsequently killed by park rangers because it “could not be re-trained to be fearful of humans.”

Even smaller, less-intimidating animals can still be dangerous if you get too close to them. In 2013, a man in Belarus got too close to a beaver while trying to photograph it. The beaver pounced and bit the man in the thigh, and the man bled to death before he was able to receive necessary medical assistance.

“We all know national parks offer a unique experience for watching wildlife,” the National Park Service says. “But with that privilege comes responsibility. Visitors are responsible for their own safety and for the safety of the animals, too. Simply put, keep your distance—no touching, no feeding, no harassing.”

For those looking to capture photos of wildlife, the Wildlife Petting Chart states, “Use your zoom, give them room.”