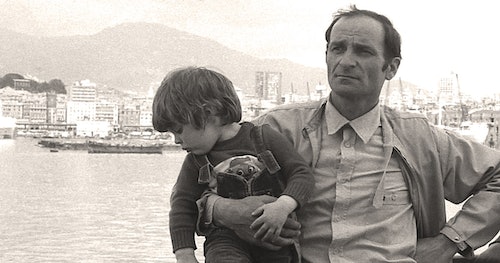 If someone says they have no regrets about the way they’ve parented, that person’s pants are, indeed, on fire. Regrets dot the road of parenthood like billboards, displaying in big bold letters the things you should’ve done but didn’t. Raising decent human beings is hard work. Mistakes and regrets come with the territory. And while dwelling on regrets is not a healthy way to go about life, it is helpful to interrogate them and extract lessons where we can. That’s why we spoke to a variety of dads about their regrets and what, if they got a parenting do-over, they would’ve done differently. One wished he would’ve yelled less; another, that he wished he’d cut himself a bit more slack. All offered up their advice to help new parents gain new perspective. Here’s what they said.

I Wish I Was More Constructive When Talking to My Kids

“The first words out of my mouth were always ‘Be careful.’ I think that phrase is so over-used. I understand why parents say it. Kids need to be mindful of what they’re doing and it’s a parents job to protect. But what does be careful mean? It doesn’t mean anything or teach anything. I should’ve been constructive instead. ‘Hold that glass tighter in your hands’ instead of saying ‘No, no, no, be careful.’ What does that do? Nothing. So, I wish I’d been more constructive and less anxious when trying to teach my kids.” — Kevin, 37, Texas

I Wish I Was More Consistent

“Kids need consistency, you know? And for me that was really difficult. I don’t do well with routine. I was also lacking in self-confidence, which made me sort of sensitive to the ways my kids reacted to me and so I’d change how I handled things or what persona I leaned into. Sometimes I was the fun dad, some days I was the strict dad. But there was no consistency. It was based on my personal moods as opposed to what they needed from me. I’m better at it now, but I wished I learned earlier how important consistency is — both in their routine and in how their parents act.” — Taylor, 44, California

I Wish I Spoke to My Children About Money More Often

“I wish I knew how much talking about money in front of my kids would’ve influenced them. We were never poor or anything, but I was always so frugal. And, looking back, the way I phrased things – saying, ‘We can’t afford that’, instead of ‘That’s pretty expensive’ — planted seeds. Now, they both stress out about money all the time. You always hear to be careful about what you say around your kids, but you never consider subtle things like that. It’s fine, just something I would’ve done differently.” – Keith, 43, Ohio

“I would’ve listened way less to my own parents. They’re good parents, and they mean well, but they definitely screwed some things up. And they were very heavy-handed when it came to telling us how to raise our kids. My wife took exception to it, and I was torn. Ultimately, we made a lot of our own decisions and ended up with some wonderful, wonderful kids. When they’re young, kids are like a project for everyone. I appreciated the input, but I needed to lean the right way when I was trying to balance.” – Jordan, 35, Florida

“My wife and I made such an effort to hang out with our daughter ‘as a family’. I think I — and we — could’ve benefitted from more alone, one-on-one time here and there. You know, just like a trip to the grocery store, or even a walk down the street. Just Dad and daughter. Or Mom and daughter. Everything turned out fine, but those memories would’ve been special, I think.” – Darrell, 40, Colorado

I Wish I Worked Out More Before I Had Kids

“I didn’t know that my physical well-being would have such an impact on my role as a parent. Even when our daughter wasn’t super active, I was struggling to stay awake, and to sleep, and to keep up with the hectic schedule of caring for her. It was physically demanding, and much more exhausting than it should have been. You have to be in shape to have a kid. It’s a lot of work. Like a lot of work. And the physical part is the easy part. That’s the part that you can control most directly, by not becoming a slob. If you let that go, it gives way to mental instability, emotional instability, and all sorts of other problems. The day you find out you’re pregnant, start doing some squats or Zumba or something. It’ll help come crunch time.” – Jeff, 38, New Jersey

“My son was super into Pokémon when he was about 10. He was just obsessed with it. And he was so excited to share it with anyone who would listen. I was very ‘meh’ about it. Like, ‘Oh, that’s cool!’ Or, ‘Neat!’ I really missed a chance there. I didn’t need to become a Pokémon expert — they’re called ‘Masters’, FYI — but sometimes I think of the way my son’s face would’ve lit up if I asked him to teach me how to play, or explain the different characters. Or if I surprised him with a special card or something. It was his thing, but there were parts of it that could’ve been our thing, too, if I’d been a little more proactive.” – Al, 44, Pennsylvania

I Wish I Stressed Less About My Son’s Interests

“I used to be so worried about my son not having any interests or activities. My oldest was always so quiet and introverted. I was always trying to get him to do one thing or another, and stressing about it. Then, all on his own, he started getting into music and photography. Next thing I know, he’s been accepted to seven colleges and playing drums at our church. I really wish I’d just relaxed more and realized that he’d find his own path without me having to pave it for him.” – Jeremy, 44, New York

I Wish I Didn’t Judge Other Parents So Much

“Before I had kids, I used to sneer and snicker every time I’d see an unruly child in public. I’d get annoyed and think, ‘My kid would never act like that.’ Of course not, right? I was going to be the perfect parent, and raise the perfect child. A child incapable of ever acting up. I was such a judgy asshole, and I want to sincerely apologize to any struggling parent I ever looked up-and-down. Before having kids, I didn’t know any better. I figured kids would do what you told them to if you were a good parent. I forgot that they’re living, breathing creatures with the capacity to just go crazy at a moment’s notice. Obviously, I had a lot to learn.” – K.J., 39, Colorado

“I would withhold stories about my troublemaking days until I was sure my kid wasn’t going to be an asshole. When I was little, my friends and I used to ride our bikes toward giant snow drifts in parking lots. We’d crash, then flip over the handlebars. Classic young boy stuff. I told my son this, in a sort of braggy way, and he goes out and does it with his friends, one of who separated his shoulder. My point is, sharing stories about the trouble I caused growing up has been a huge source of bonding between me and my son. Now that he’s older, and mature, and a good person, that is. Be patient, make sure your kid isn’t an idiot, then tell him about the way you used to mess with your RAs.” – John, 36, North Carolina

I Wish I’d Went a Bit Easier on Myself

“Instead of questioning every decision I made, I might only question, like, every third or fourth decision. When my kids were young, I would constantly question myself. ‘Did they brush their teeth for long enough?’ ‘Is this laundry detergent safe for baby skin?’ It was just endless self-doubt. Instead of doing that, I would pick my battles, for sure. ‘Is this school system worth moving for?’ Definitely a necessary question to answer. ‘Will my kid get salmonella from licking a Lego?’ I’d let that one go.” – Aaron, 37, Illinois

“Everything is a phase. Being a whiny toddler is a phase. Being a pussy at sports is a phase. Thinking about nothing but girls is a long, long phase. But the thing is, after all these phases end — or at least become less intense — if you’ve done your job, and you’ve guided your kid, he’ll come out of them with the best lessons learned, and leave the bullshit behind. Your kid will go in and out of things when he’s ready, and you just have to be accepting. Sometimes, that’s brutally hard. But, even if the phase outlasts you, the discomfort won’t if you don’t let it.” – John, 62, Ohio

I Wish I Would’ve Traded Fights for Pep Talks

“I wish I knew that having a plan isn’t the same thing as having a plan that works out. When we got married, we tried to see the future. Jobs first. Then house. Then kids. Then better house. And so on. That was our plan, and we were both on board. But then ‘life’ happened. I lost my first job before we could buy a house. When we could finally afford one, her credit was so bad that it was almost impossible to get a loan. All of these little things derailed our perfect plans. And instead of saying, ‘That’s life…”, I think she — and, in a way, me too — took it as a sign that we weren’t meant for each other. Looking back, I probably would’ve traded a lot of those fights for pep talks, instead.” – Liam, 33, Florida

I Wish I Said “I Love You” More

“It’s simple: I wish I said I love you more often. I come from a family that didn’t express affection outwardly very much. My parents were great people and expressed love in a different way, but they didn’t ever tell me they loved me. When my kids were young I barely told them it. It wasn’t a part of my vocabulary. I didn’t realize what a blind spot I had until my daughter flat out asked me why I didn’t tell her I loved her. That’s a feeling I never want to have again. So, express love through actions. But also through words.” — Liam, 34, North Carolina

I Wish I Didn’t Yell As Much

“I yelled too much. Too much. I would fly off the handle at every little thing if I was stressed or anxious and often wanted the house to be quiet. Kids aren’t quiet — and they shouldn’t be. Silence is deafening, you know? I was so concerned with my own mental health that I yelled instead of explained or suggested. I shouldn’t have been so quick to lose my temper. It hurt my relationship with my kids and I worked a long time to fix it.” — Jake, 49, Massachusetts