For distinguished gentlemen, neat and properly cared for articles of clothing are key to looking well-dressed–and how they are worn is just as important, if not, more so than the clothing itself. So when it comes to garment care, does the iron or the steamer do a better job?

Just because you might be able to afford designer labels, that doesn’t mean that they’re going to look good on you, if the fit is poor or if the garments are improperly cared for. We’ve covered fit in a number of other guides, but today’s guide is another installment in our long-running garment care series, covering two appliances designed to eliminate unsightly wrinkles from your clothing — the iron and the garment steamer. Each of these works in a different way and has its own advantages and disadvantages. 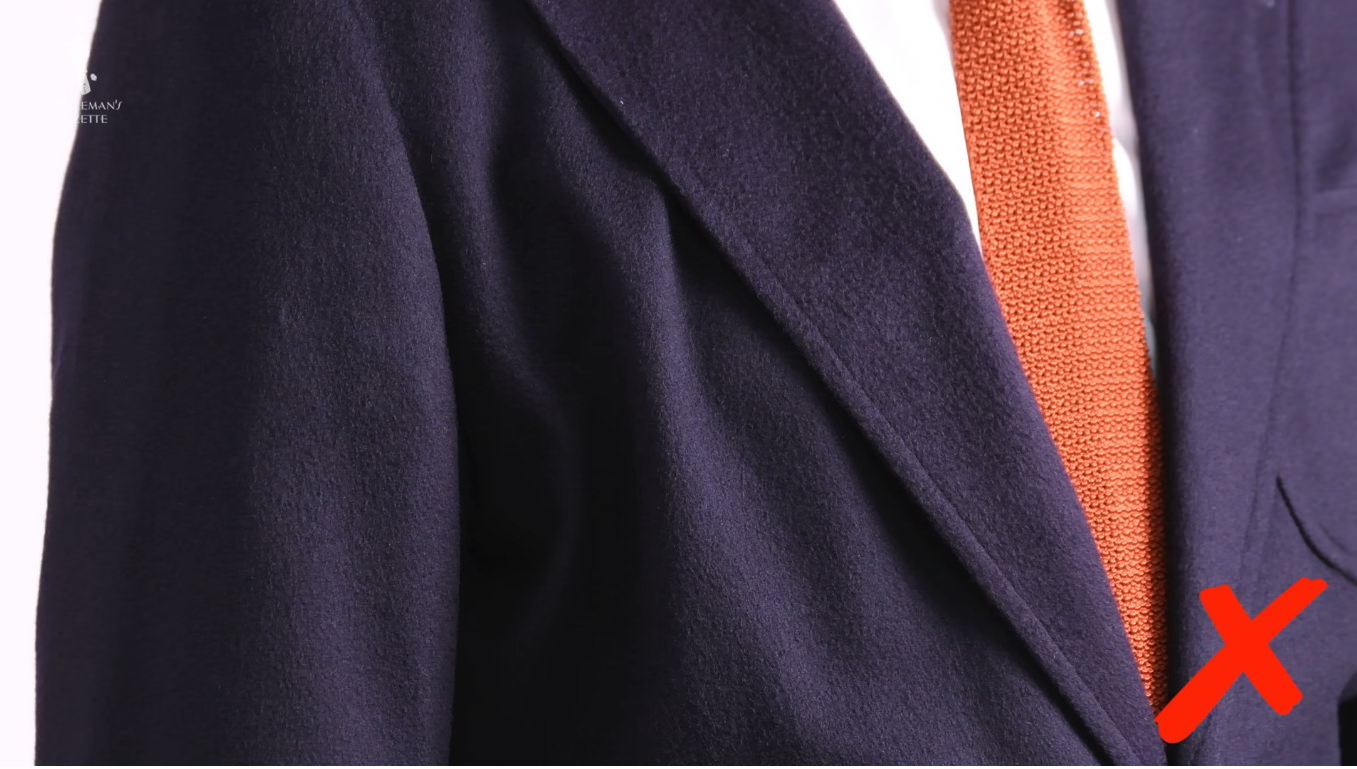 No matter the quality of a garment’s fabric, a poor fit makes for a sloppy appearance (even though the rust orange silk knit tie from Fort Belvedere is a smart choice!)

A Brief History of Irons & Steamers

The iron (also called steam iron or flat iron) is an appliance that, when heated, is used to press the wrinkles out of clothing. Metal pans filled with hot coals were used to smooth out fabrics as far back as the First Century B.C./B.C.E. in China. Fast forward to the 17th century, where handles were attached to thick, triangular slabs of cast iron, which were then heated in fires or on stovetops. Other designs, instead of solid cast-iron slabs, were box irons that could either be filled with hot coals or heated iron rods. 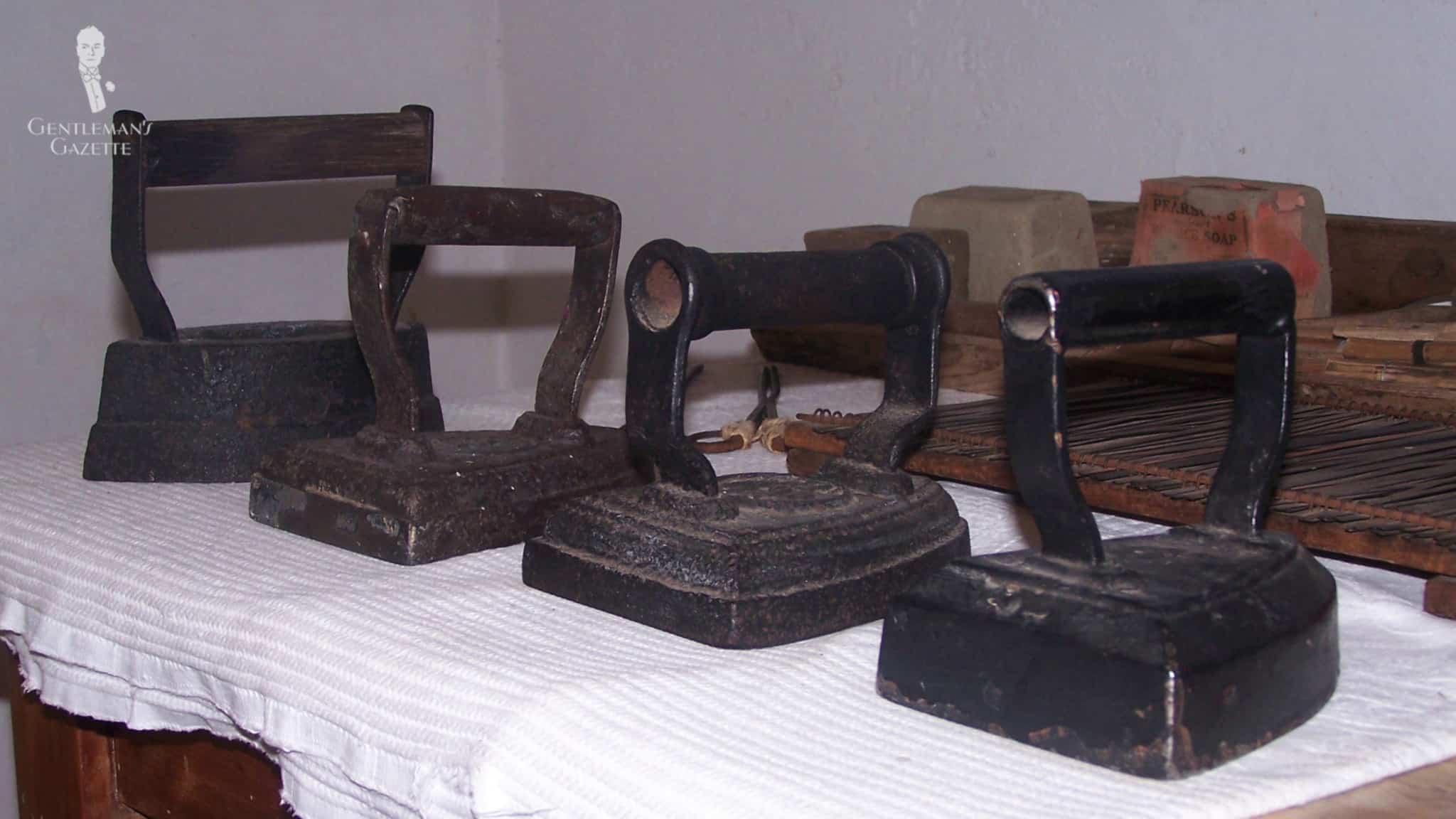 Cast-iron slabs with handles were the irons used in the 17th century.

By the late 19th or early 20th centuries, there were many irons in use that were heated using fuels such as kerosene, ethanol, whale oil, natural gas, or even gasoline. Some houses were equipped with a system of pipes to distribute gases to different rooms in order to operate different appliances such as irons, in addition to lights in the home. And despite the fire risk, liquid-fuel irons were sold (at least in the United States and in rural areas therein) up to about World War II –at which point they were largely supplanted by newer, electrically powered irons. 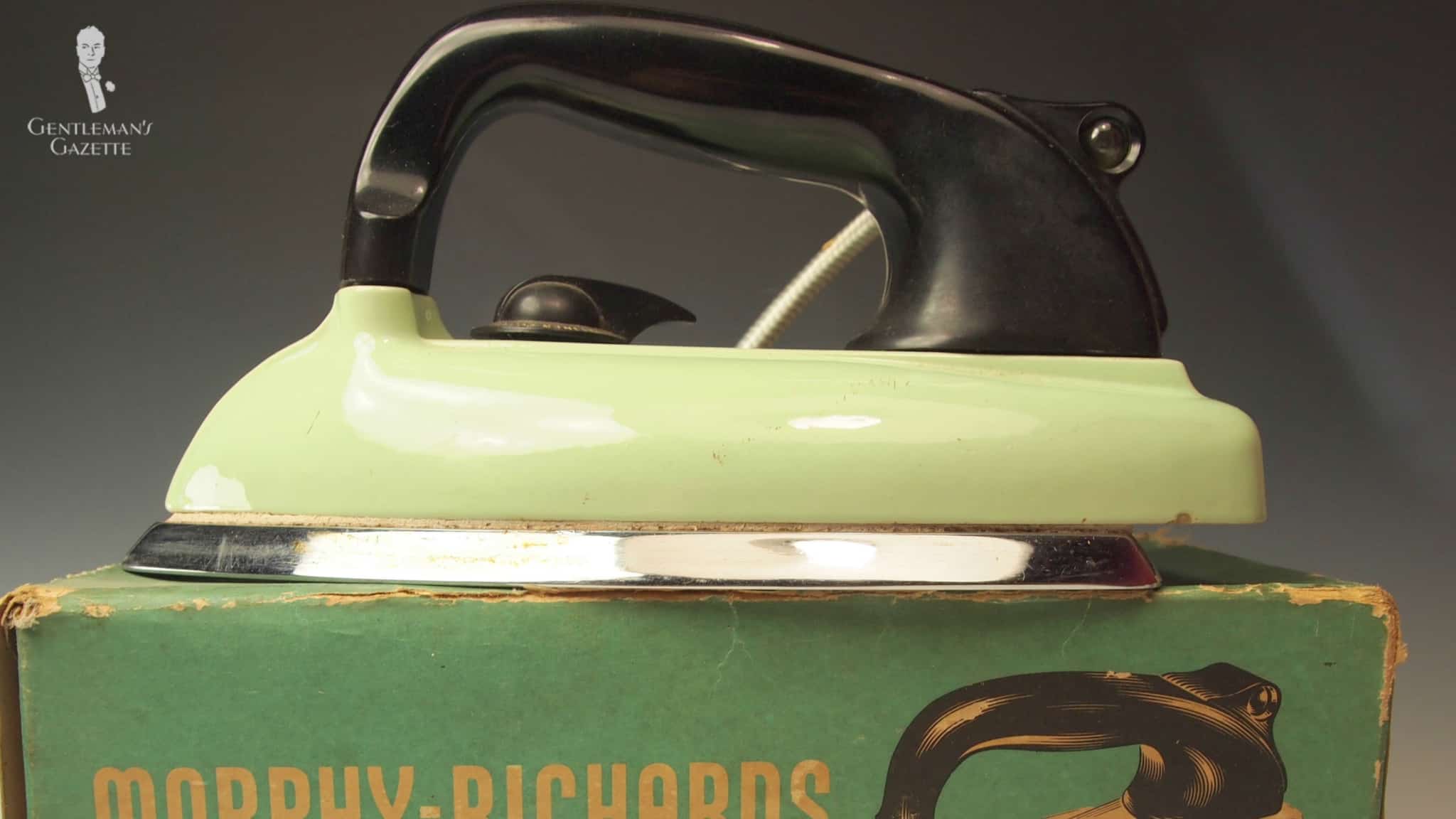 The invention of the resistively heated electric iron is credited to Henry W. Seeley of New York City in 1882, however. Meanwhile, credit for the invention of the steam iron goes to Thomas Sears. The first commercially available electric steam iron was introduced in 1926 by the Eldec company of New York, but it wasn’t initially a commercial success. The patent for an electric steam iron was issued to Max Skolnik of Chicago in 1934. Four years later, in 1938, Skolnik granted the Steam-O-Matic Corporation of New York the exclusive right to manufacture steam-electric irons. It was these irons that achieved popularity and led the way to the more widespread use of electric steam ironing during the 1940s and ’50s, which continues up to the present day.

Meanwhile, commercial fabric steamers (also called garment steamers or simply steamers) have been available since the early 1900s, employed early on by professional cleaners before spreading to home usage–but compact models are a fairly modern innovation. Some sources indicate that more portable models came about because of the popularity of men’s hats in the first half of the 20th century. At the time many people used a tea kettle to steam out wrinkles in their hats or to re-block them. Garment steamers made this job much easier. 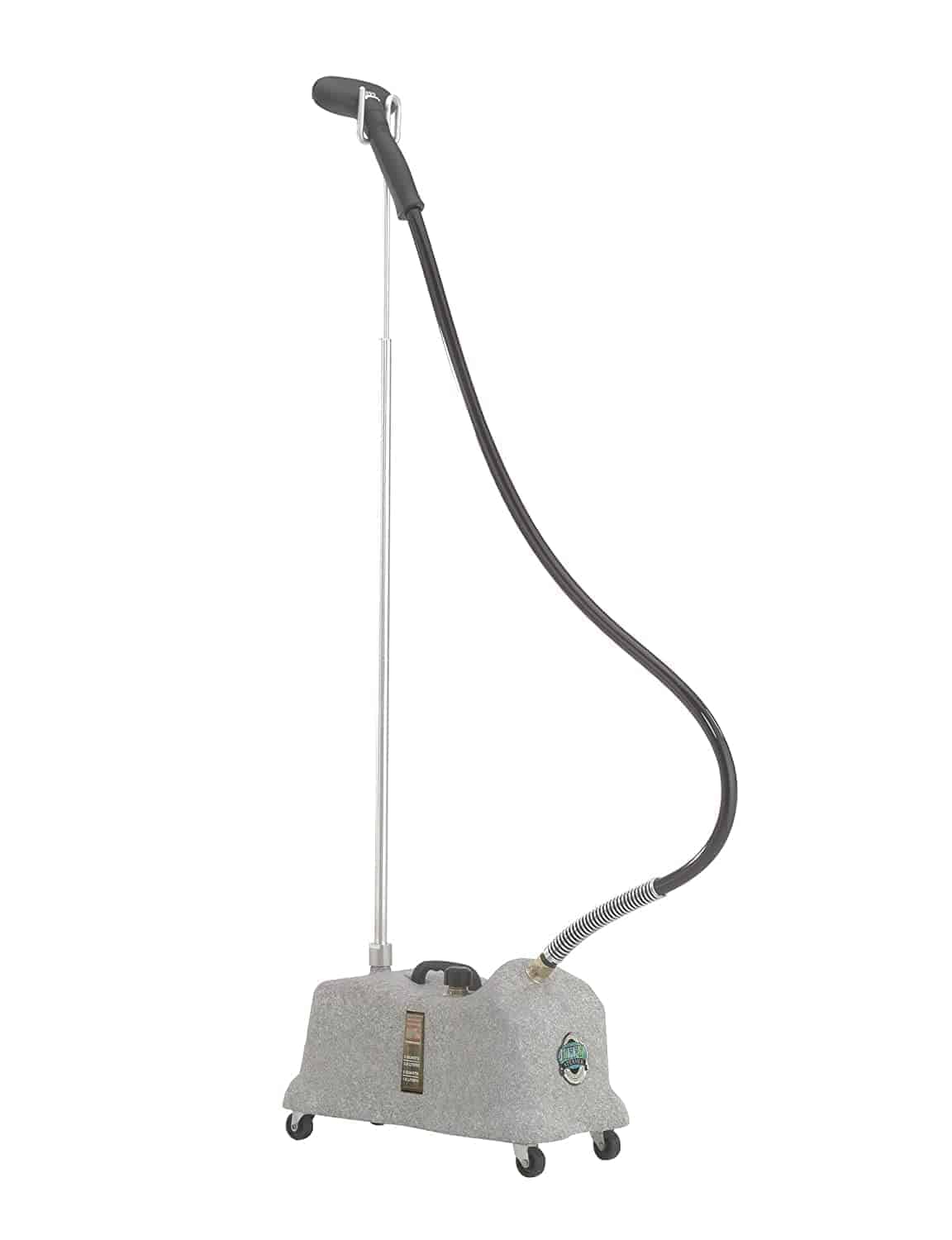 Today’s fabric steamers come in three basic sizes: the commercial floor models used at dry cleaners and manufacturing plants; the mid-sized models for home or small businesses like tailors; and the most recent evolution, which would be the mini steamers used for quick touch-ups and for travel. 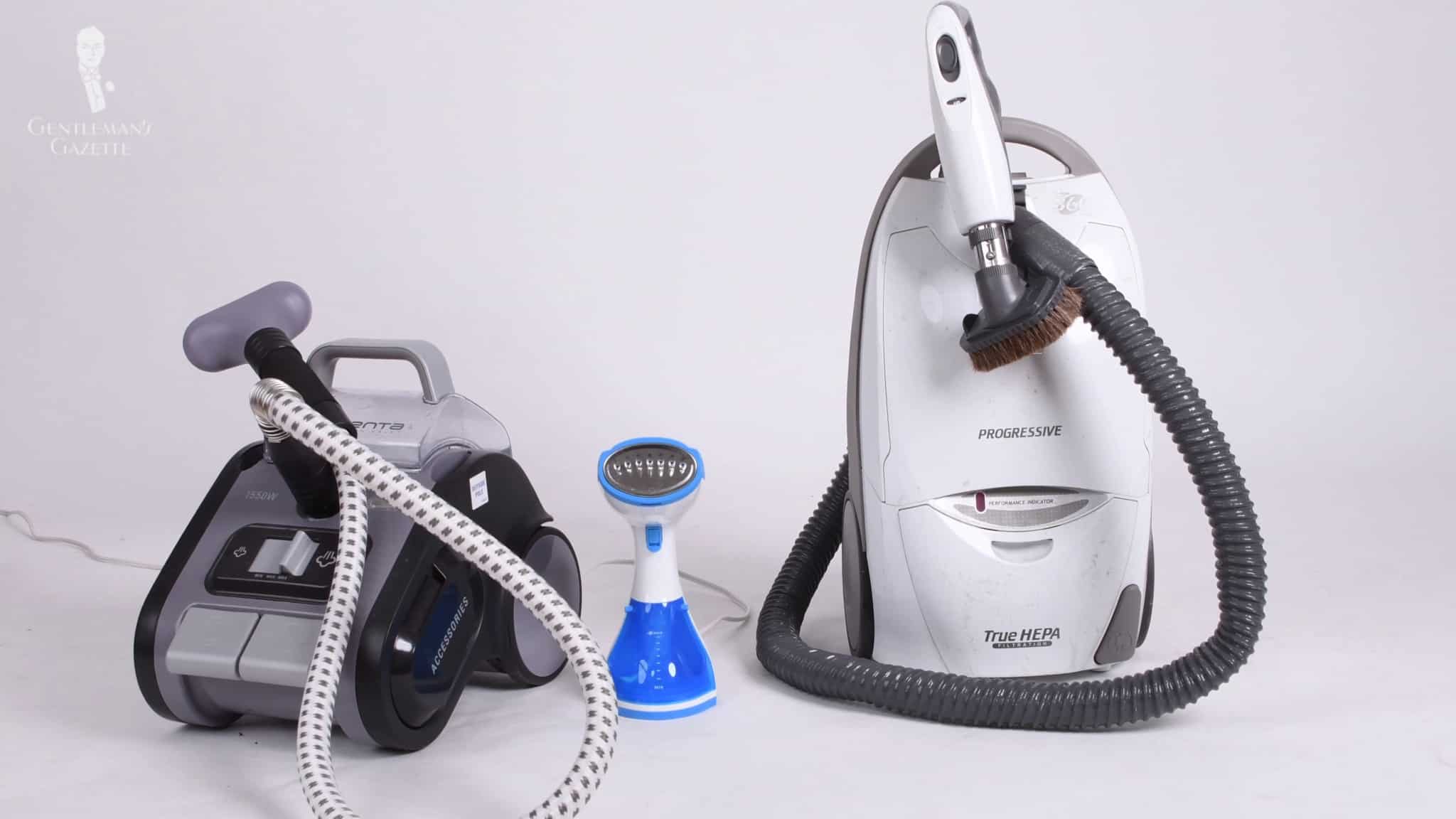 How Does an Iron Work?

Most domestic irons typically range in operating temperature between 250°F (121°C) to about 360°F (182°C). Ironing works by loosening the bonds between long chains of molecules that exist in fibrous materials like fabrics. With the heat and the weight of the ironing plate, the fabrics are stretched and then maintain their new shape after they cool. 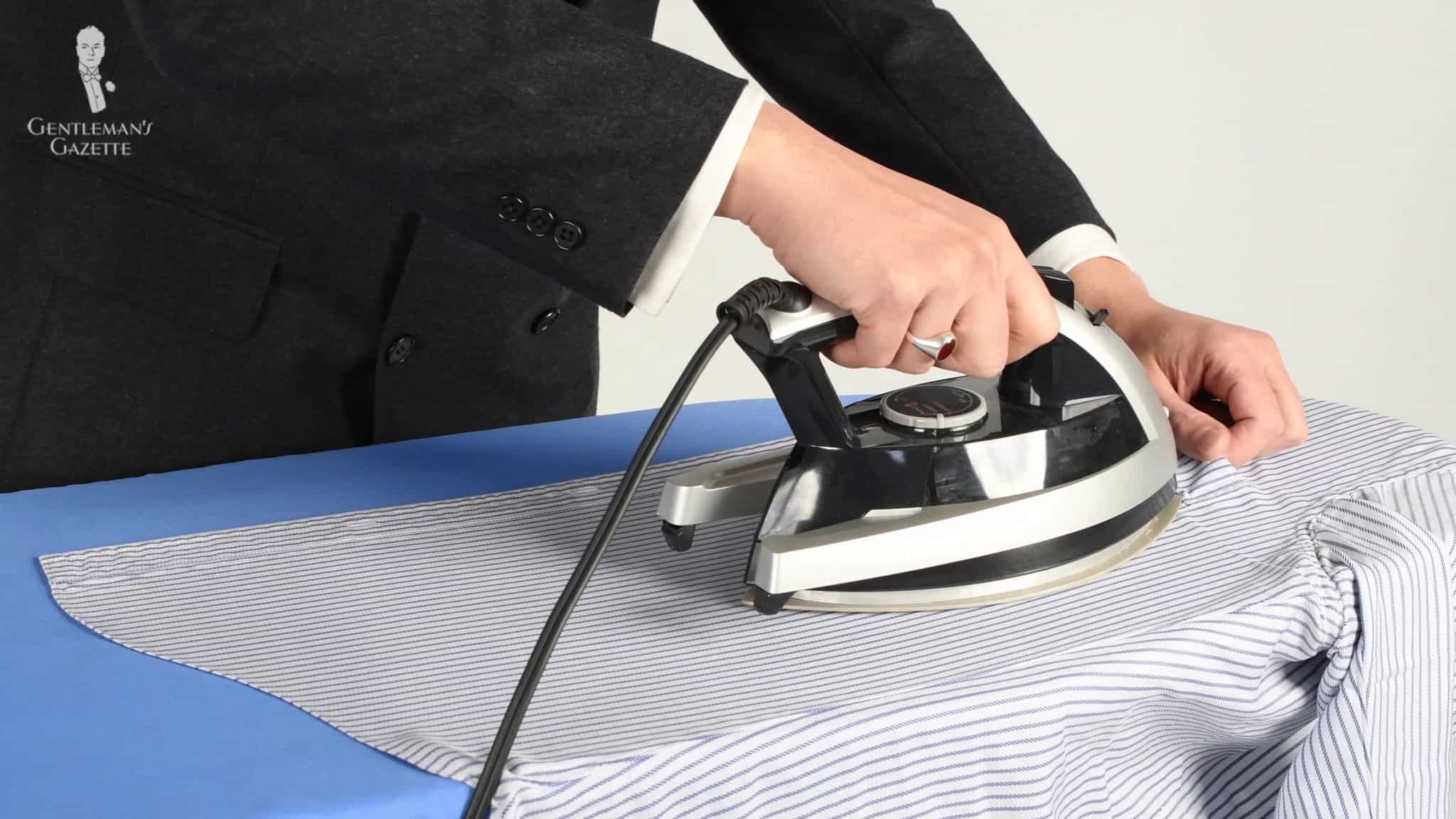 The hot plate (or sole plate) is typically made of polished aluminum or stainless steel, and can sometimes be coated with friction and heat-resistant plastic. The heating element is controlled by a thermostat that switches the current on and off at a certain rate to maintain the desired temperature.

How Does a Steamer Work?

In the case of the steamer (and as the name implies), steam is the primary agent to remove wrinkles from garments, rather than heavy pressure. The steam, sometimes along with slight pressure from the steamer’s surface, relaxes the fiber of the garment rather than flattening it. A jet of steam, either from a wand at the end of a hose, or a smaller, more compact unit, is generally directed at the surface of a garment (which can be hung from a hanger). As we said, the steamer is generally held a bit away from the fabric, but more pressure can be applied if necessary. 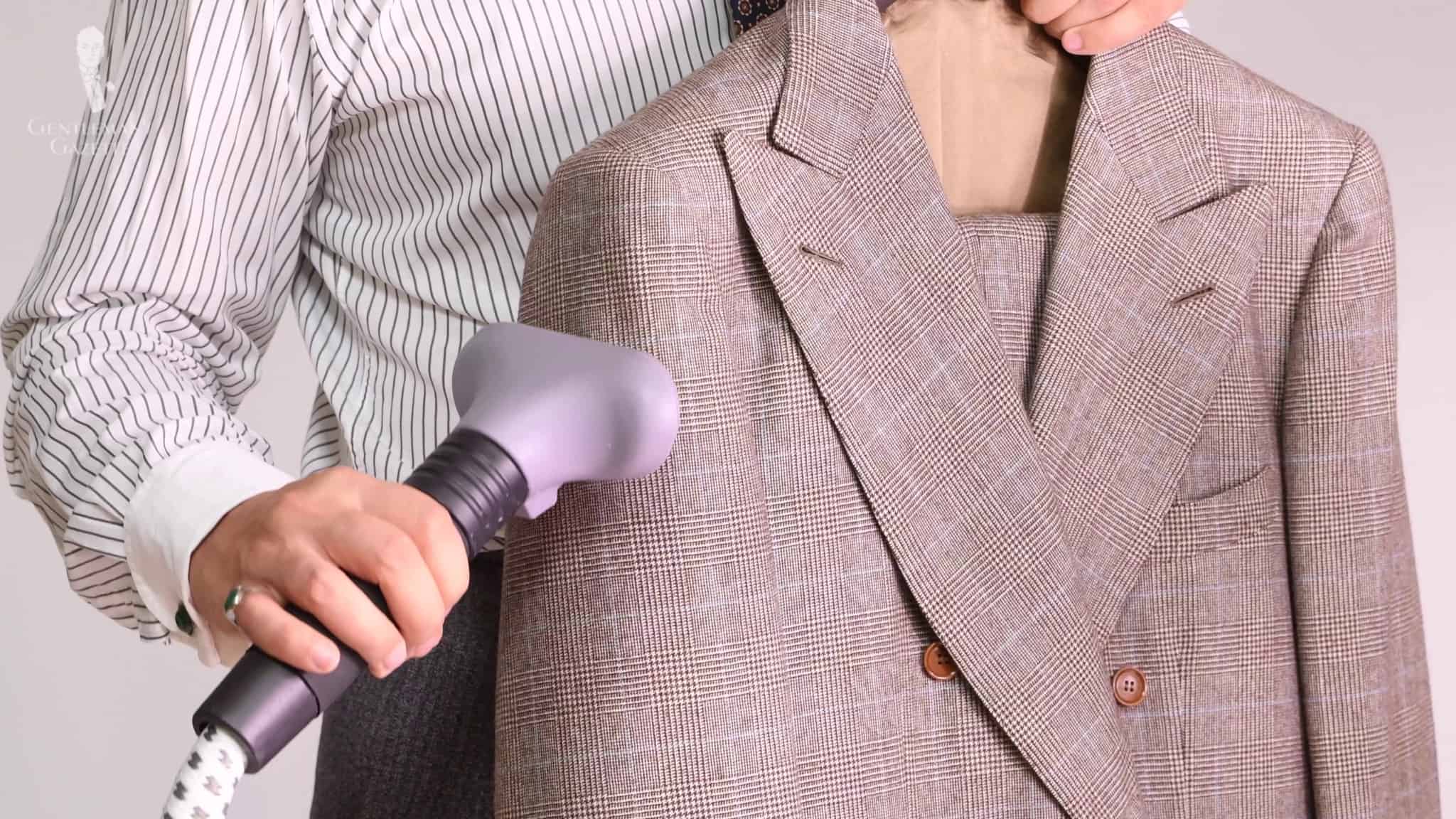 Steam works to relax a garment’s fibers, aided by gravity

To generate steam, steamers typically heat their water to anywhere between 200 and 400°F (93 to 200°C), though the larger stand-up models will usually allow for temperature control. The higher settings are typically used to steam wrinkles out of denser, sturdier fabrics like cotton and linen, while cooler settings are used for more fragile fabrics. Portable steamers are typically without temperature controls and as such, they tend to run cooler on average. 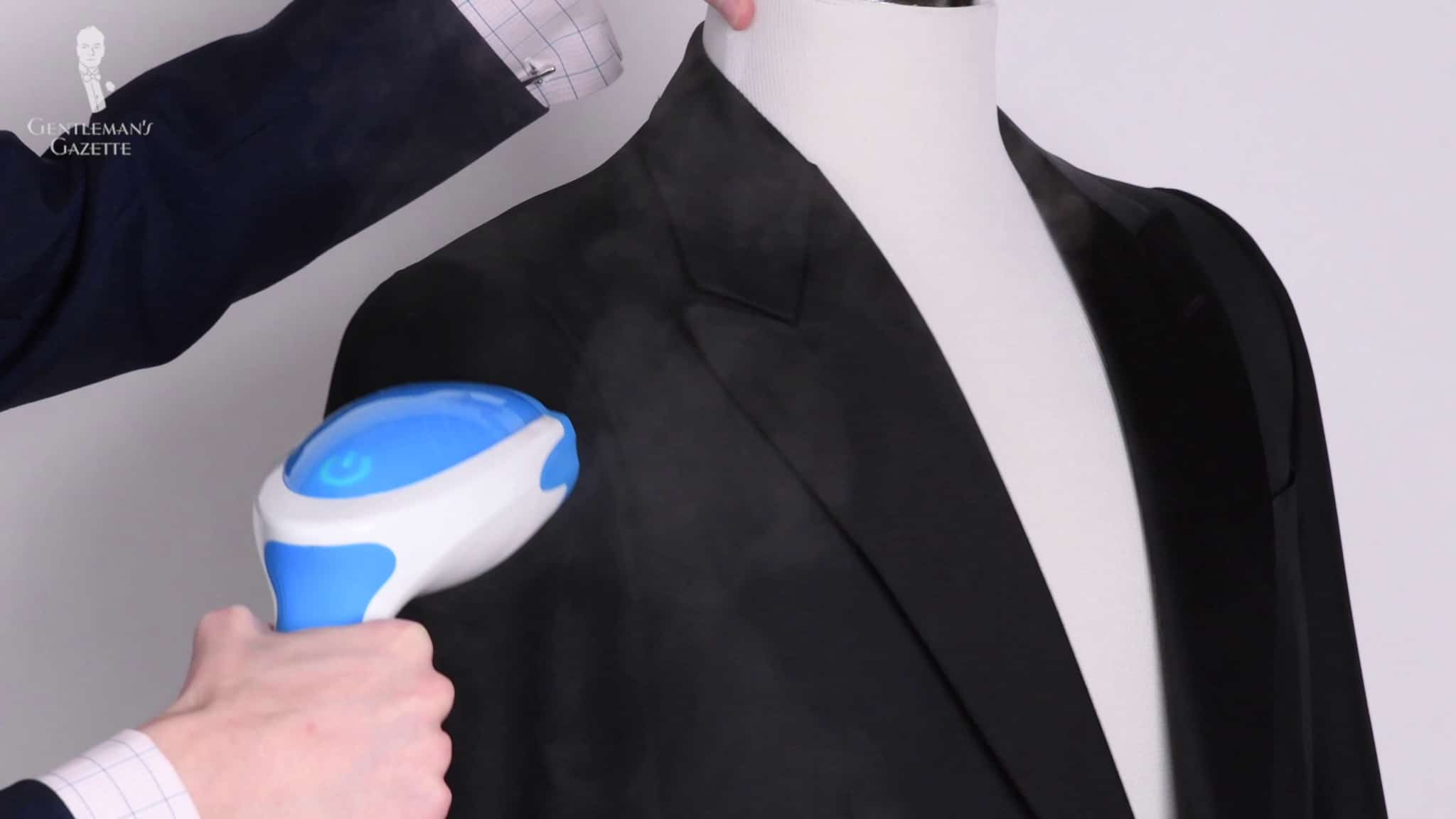 Visible steam being emitted from a portable garment steamer

Simply put, then, both irons and steamers use heat to remove wrinkles from clothing–though an iron uses the aid of pressure, where a steamer uses the aid of moisture in addition to the force of gravity. Most modern irons now have steaming functions, as well, to take advantage of using moisture. But this doesn’t mean steamers are obsolete–far from it, in fact.

Pros and Cons of Irons and Steamers

An iron is going to provide a clean and crisp finish overall, and will be more efficient than steaming on heavy and durable fibers and weaves, like linen, wool, and denim. It’s ideal for any garment in need of a sharp crease, like dress pants for instance, and should also work well on dress shirts. An iron will also provide greater control and precision, given that you’ll be able to easily maneuver the solid plate rather than the more random dispersal that steam will provide. 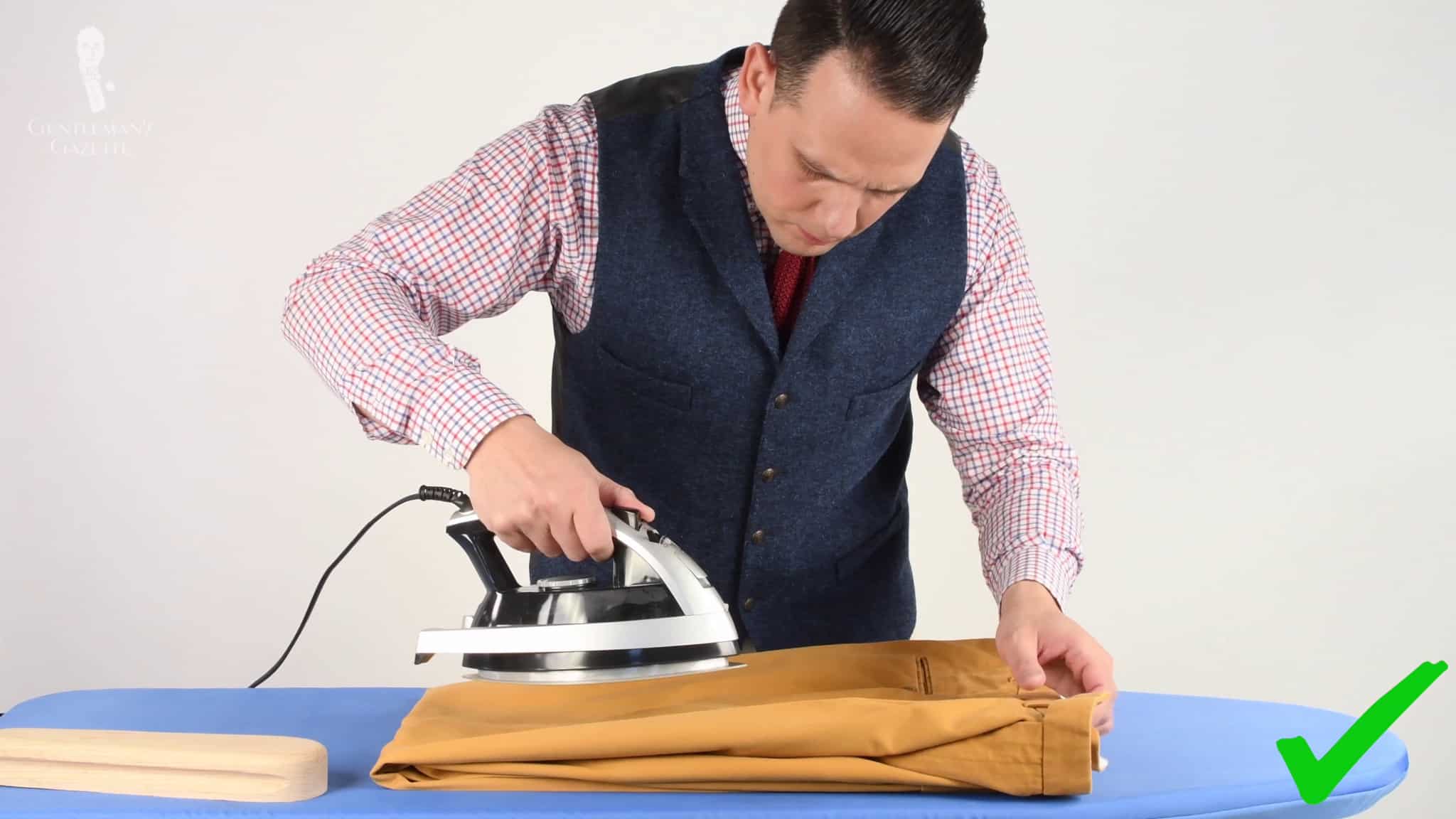 Irons will provide a crisp and efficient finish on heavier fibers

In terms of drawbacks, irons are easy to use on smooth fabrics and large expanses of fabric, but they’re going to be trickier on things like sleeves, pleats, and curved surfaces. There are workarounds for this of course, such as using things like a tailor’s ham or a sleeve board but this is obviously going to require extra equipment. Perhaps the biggest drawback of irons is that they post a greater risk of burning or otherwise marking clothes if they’re left in place for too long. 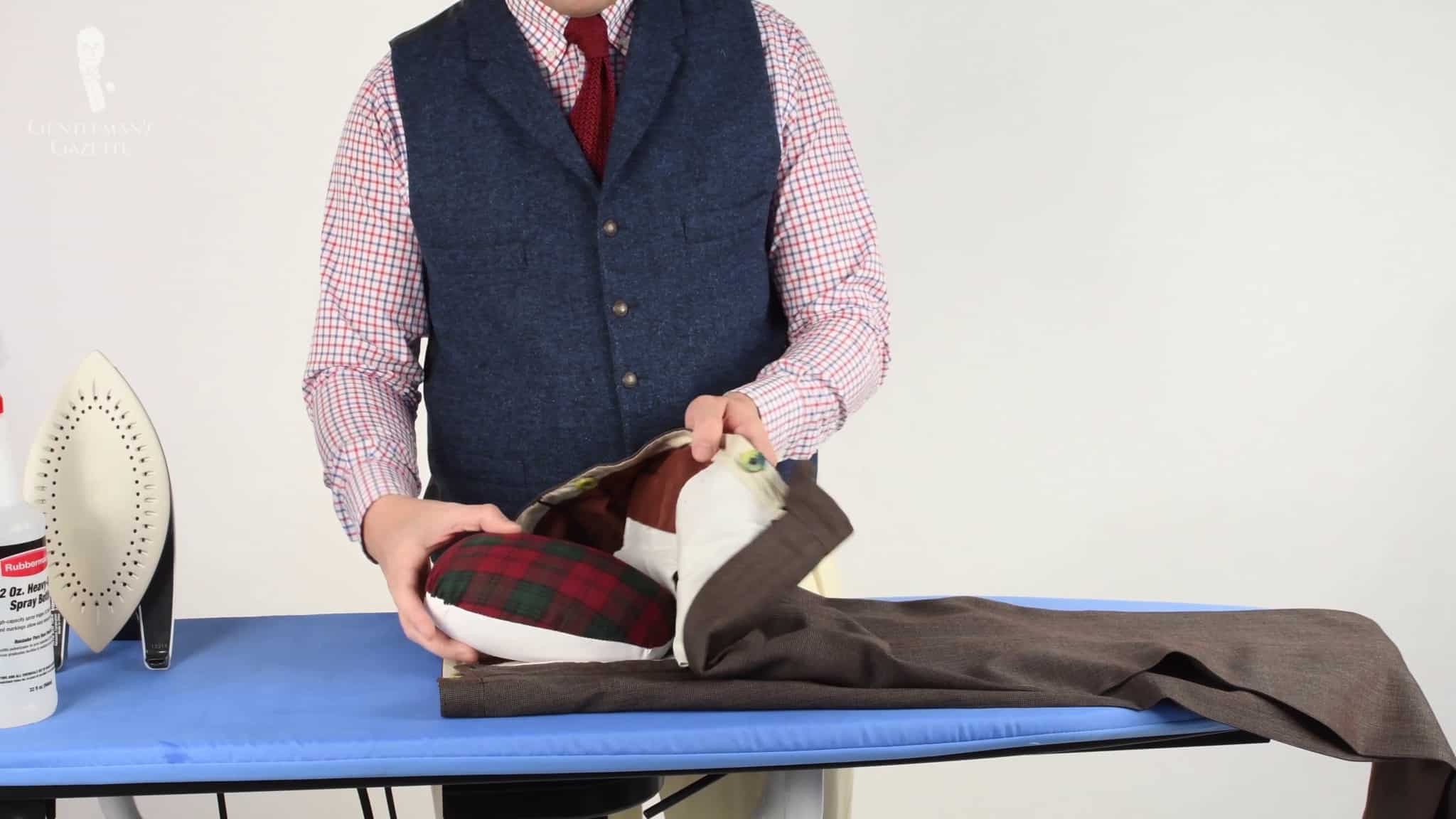 Using pieces of equipment like a tailor’s ham can aid in trickier areas like curves, pleats, etc.

Finally, everything required for the ironing process will take up more real estate in your home. Not only because of the accessories we just mentioned, but also because of the ironing board. While you can get away with placing a towel over a flat surface like a table in a pinch, having a true ironing board is ideal. And while most ironing boards can be folded and stored, the fact of the matter is that all of your ironing equipment is still going to take up a bit of room. 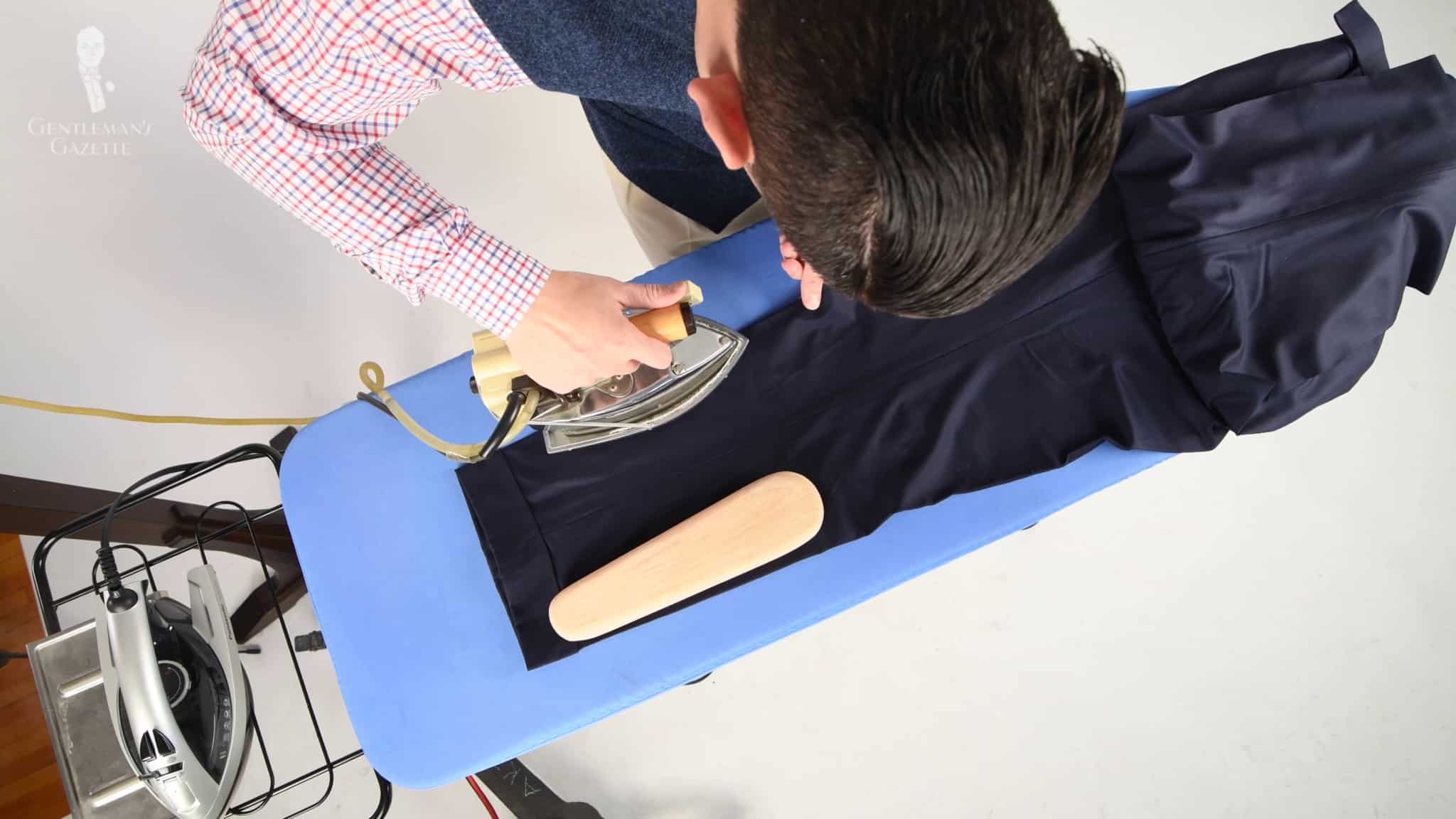 All your ironing equipment will still take a bit of room in your home.

Meanwhile, steamers work especially well for heat-sensitive materials like silk and synthetics, as well as delicate materials like cashmere, velvet, and corduroy. With that said, though, steamers do have the ability to remove wrinkles from almost any kind of fabric, with minimal risk of scorching. They’re ideal for freshening up items between washes, and they do well with garments where iron would be unwieldy, like structured jackets. The newer, portable-sized steamers, while not necessarily as powerful as their stand-up counterparts, are ideal for travel, as well. 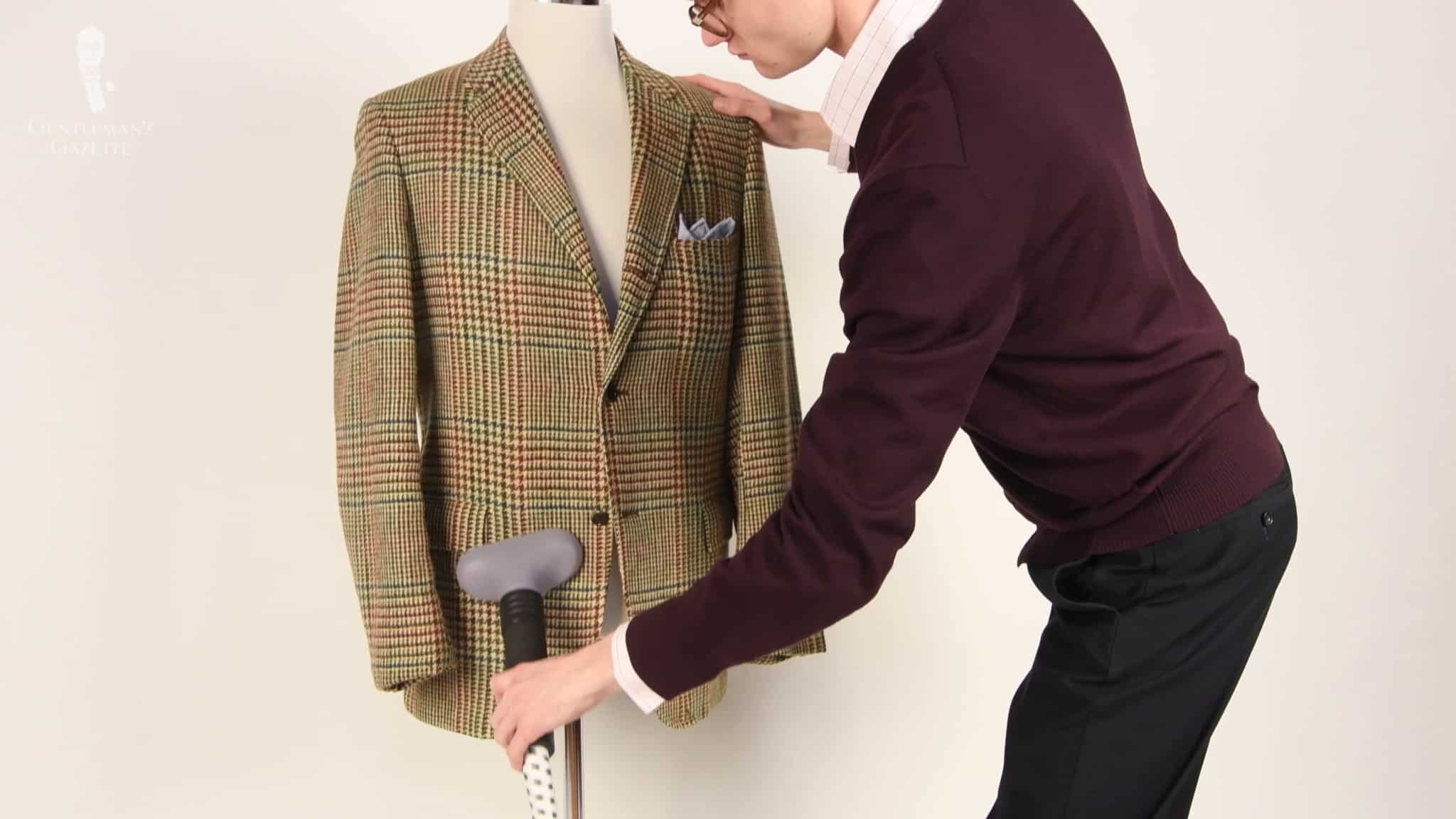 Also, most steamers are easy to use. The user simply needs to hang up their garment, fill the steamer’s water reservoir and plug it in, wait for a few minutes, and then go over the article with a sweeping motion, allowing the steam from the wand to straighten out any wrinkles. Steamers are generally faster than irons, as well, as you don’t have to lay your garments out on a flat surface and keep re-positioning them as you work.

Whether hand-held or stand-up, steamers typically aren’t going to take up as much room as an ironing setup, either. When using a steamer with a hanging garment you won’t create creases, as you aren’t flattening the fabric against a hard surface and you’ll easily be able to see how the garment naturally hangs. This is in contrast to an iron, where if you’ve got multiple layers of fabric on top of one another, you might be wrinkling one portion while smoothing out another. Steamers, therefore, are generally going to be more user-friendly overall. 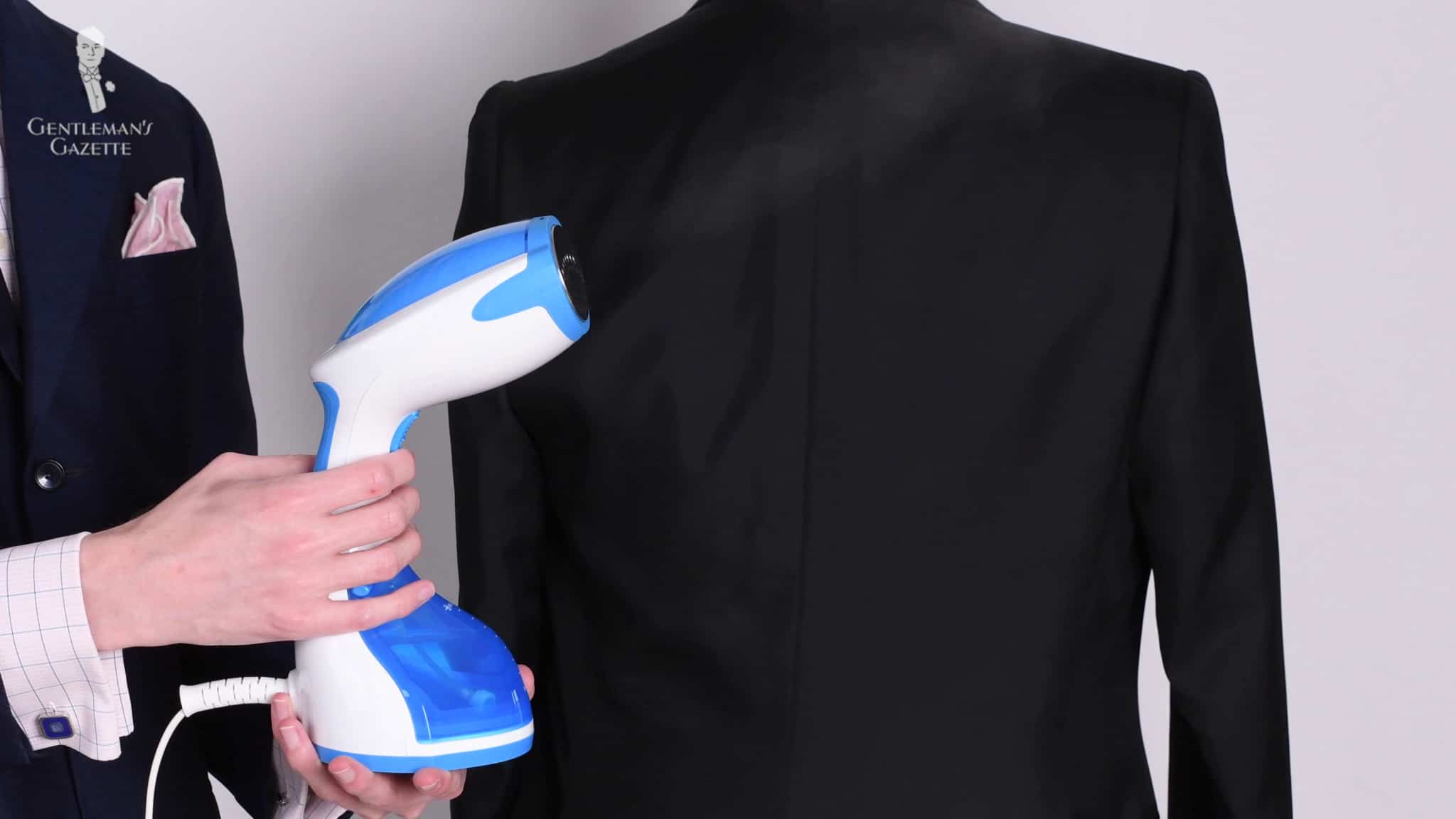 Disadvantages of steamers, meanwhile, include having to spend more time on thicker fabrics, not being able to set creases as exactly, and possibly tiring out your operating arm, depending on how much time you’re spending and how many garments you’re steaming. It is also possible to over-steam, as well, at which point you might start to loosen the seams on some garments. 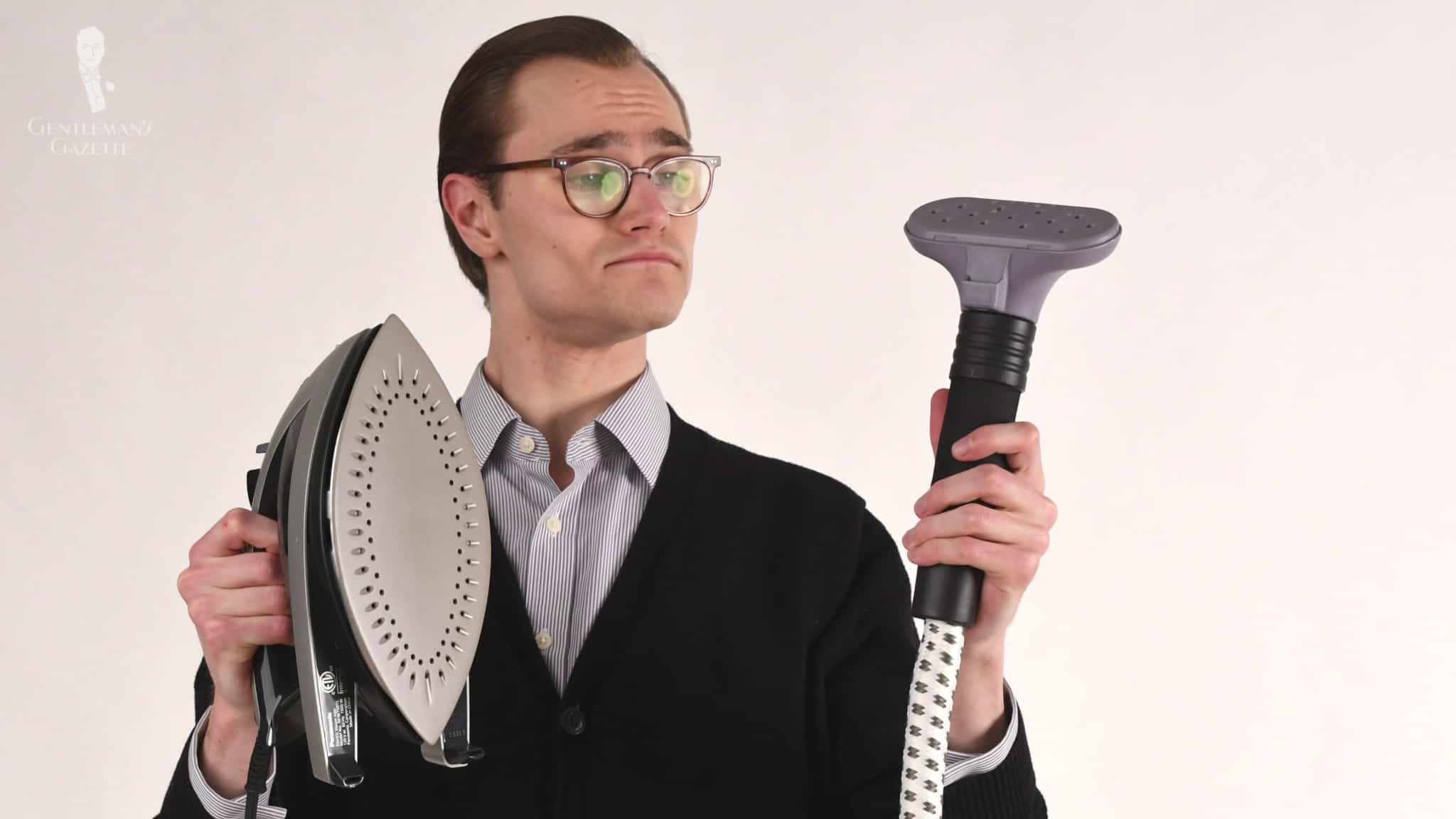 Irons and steamers each have pros and cons 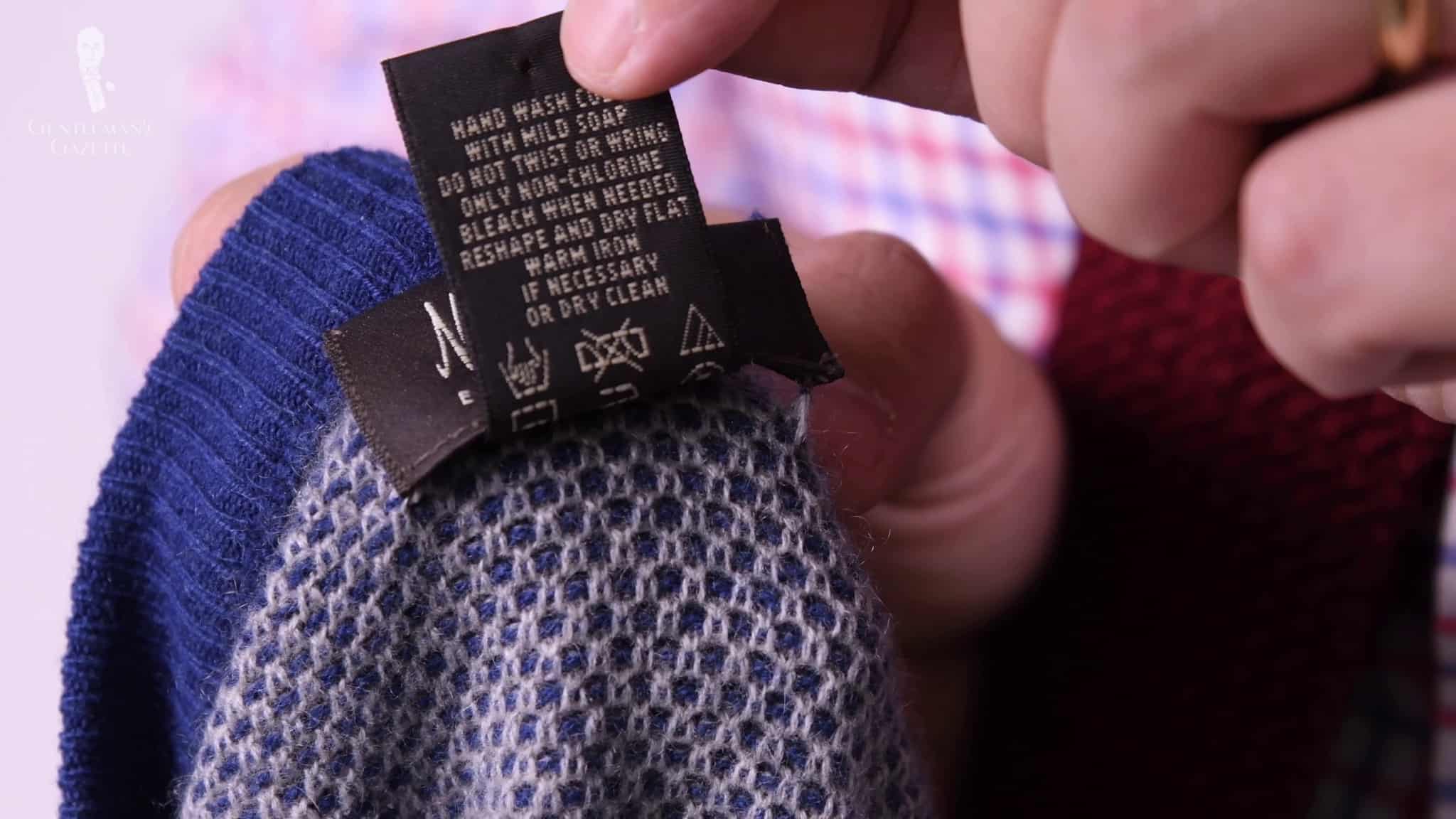 Check the cleaning guidelines on your garment’s tags before attempting to use an iron or a steamer on them. 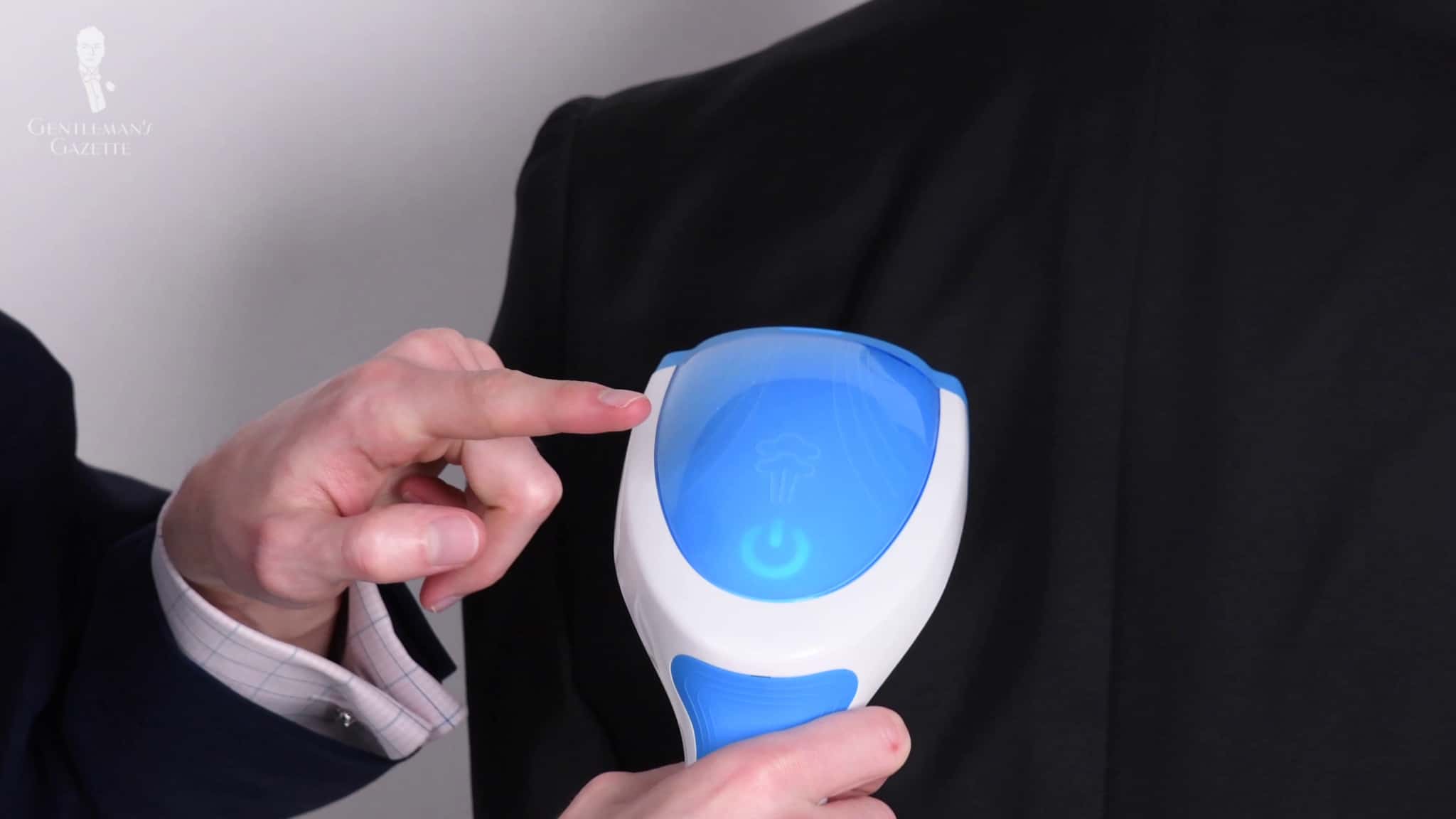 Don’t forget to turn them off after use.

Iron vs. Steamer: Which is Better?

The answer is: we recommend both! You might not be surprised to hear it, given everything we’ve laid out in this guide, but the fact of the matter is that each appliance has its own best uses, where the other would be lacking. 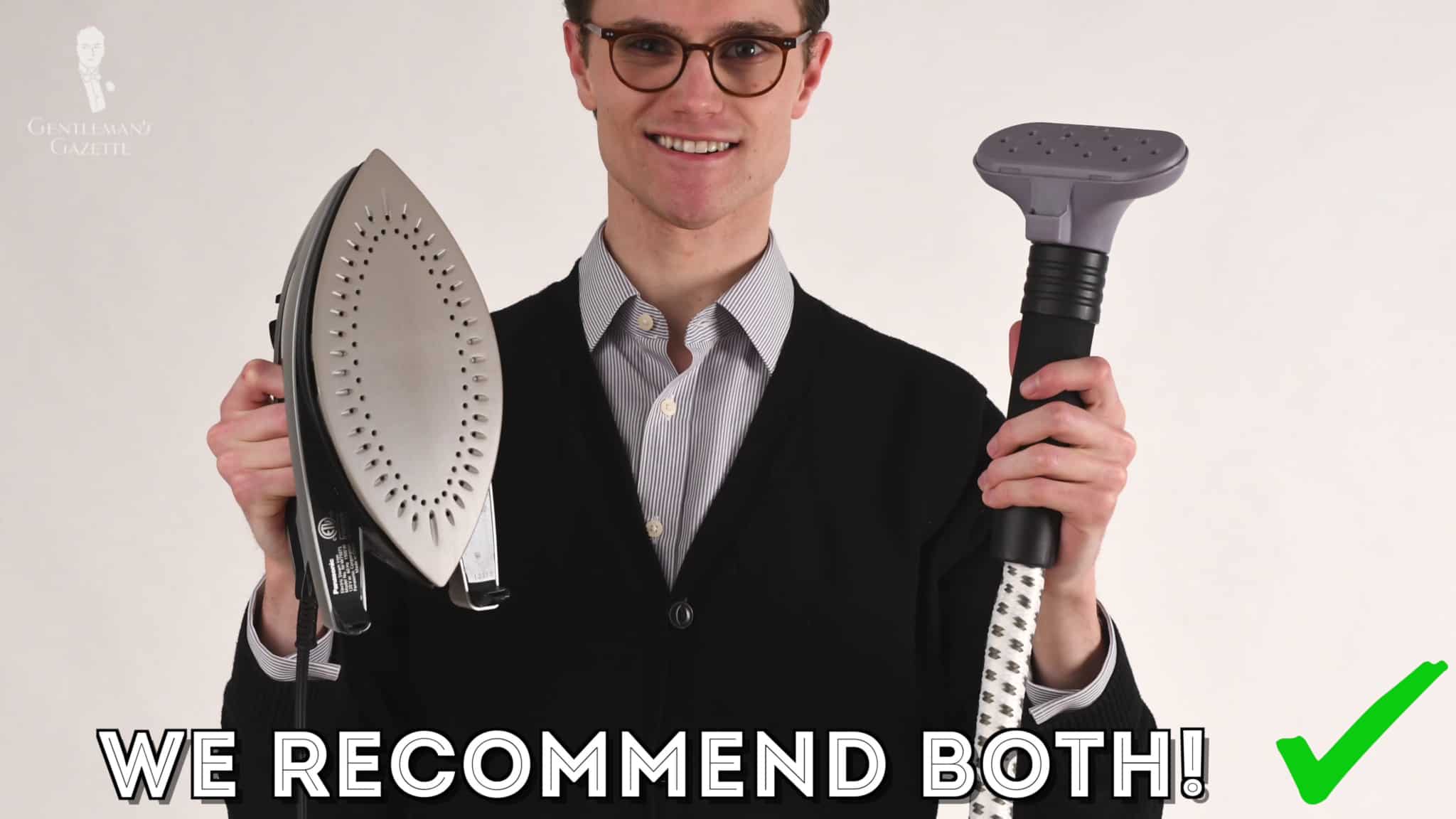 It’s best to have both an iron and a steamer in your arsenal!

An iron is better if results matter to you. While ironing takes a bit longer and requires a bit more expertise, it provides a level of polish a steamer can’t. Meanwhile, a steamer is easier to use, more versatile overall, and provides generally good results on both delicate and average weight fabrics. It’s ideal for touch-ups and for use while traveling. The well-prepared gentleman, then, should ideally have an iron and a steamer in his garment care arsenal.

Do you have a preference between irons and steamers? Share with us in the comments!