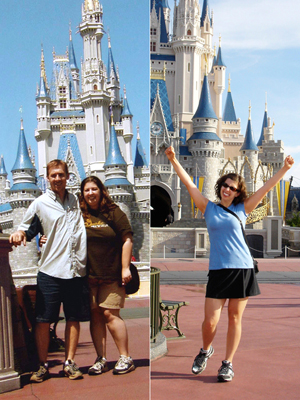 Eating Secrets from a Woman Who Lost 105 Pounds.

Once upon a time, Jackie Freitag lived on a vegetarian diet minus the fruits and veggies. But when the scale hit 230, she embraced all things green, hit the gym, and, with a little help from her Prince Charming, made a life and health transformation worthy of a fairy tale.

Id go for weeks without touching a fruit or vegetable.

Ive been a vegetarian all my life, but I never liked vegetables. Instead, I lived off the beige diet of bread, macaroni and cheese, and peanut butter and jelly. I probably had a few extra pounds on me growing up, but I never considered myself overweight. My food choices started to catch up to me in college, though. Even the aerobics classes I took twice a week werent enough to balance out my snacking and nighttime eating. By graduation, I weighed 180 pounds and wore a size 14. It got worse from there: I gained 50 pounds in the next two years. I drove to and from work, sat for eight hours at my job as a research assistant, and collapsed in front of the TV at night. Id eat two doughnuts or a bagel with cream cheese for breakfast, grilled cheese and french fries for lunch, and half a box of pasta with butter and cheese for dinner, and snack on ice cream or potato chips while watching TV. I had heartburn every day, and my clothing became so tight that I wore stretchy yoga pants instead of jeans. My boyfriend, Eric, whod always been fit, would suggest that we take a walk or bike ride, but I always came up with an excuse not to. By September 2003, at 26, I hit my highest weight: 230 pounds.

That month, Eric and I vacationed at Disney World. It was 90 degrees, and I was dripping with sweat. I was exhausted at the end of each day. I felt like a slug. One morning, Eric surprised me with breakfast at Cinderellas Castle, and we took a picture out front. I was wearing size 20 shorts and a mens size XL shirt. Youd think seeing a photo of myself that heavy would make me realize I needed to lose weight, but I thought, Thats a really good picture. I was half hiding behind Eric so you couldnt tell how much bigger I was than him, and I couldnt make out my double chin. We framed the photo and gave it to Erics parents.

A few months later, though, I got the kick I needed. My friend Jill asked me to be her maid of honor. Jill was thin, as were her other bridesmaids, and the thought of being the heavy one was horrifying. Id never been in a wedding before, and I didnt want to feel uncomfortable in front of so many people.

I barely made it through my first aerobics class.

I began eating healthier in March, which gave me seven months until the wedding. I read on nutrition labels that the average person eats 2,000 calories a day, and I read online that eating 1,500 calories could safely lead to weight loss, so I kept my daily calorie count between those amounts. I knew Id have to change what I ate. I experimented with broccoli, asparagus, peppers, tofu, and beans and I actually enjoyed them! I had cereal and orange juice for breakfast, organic frozen meals for lunch, and energy bars as a snack. For dinner, I would eat a veggie burger, soup and salad, a vegetable omelet, or one serving of pasta topped with tomato sauce. I allowed myself one snack, like hot chocolate or one scoop of sorbet. I also kept a food journal to track my calories and weight loss. Writing down what Id eaten was empowering I felt like I was doing something good for myself.

I also rejoined the gym Id belonged to in college. I was nervous to go back because I knew everyone would see how much weight Id gained. But the trainers seemed excited to see me, and that made me more comfortable. I took a cardio and weight-training class on Monday and Wednesday nights, and my first class was so hard! I huffed and puffed the entire 90 minutes. But the class got easier over time, and after a few weeks I looked forward to the gym. Working out gave me tons of energy, and I started to think maybe there was a healthy person inside of me. I weighed myself every week and lost one or two pounds. It was thrilling! Id call Eric and say, I lost two pounds! and he would be so excited for me. By Jills wedding, I had lost 30 pounds. I was still the heaviest bridesmaid, but I felt proud that I had accomplished what Id set my mind to. I remember putting on my dress and thinking, I look pretty good!

I decided to go all the way.

Since I was enjoying my routine, I kept at it. By March 2005, I wanted to try something new, so I ran the short loop in my parents neighborhood about a third of a mile. I didnt even make it halfway around before I had to walk. I dont know why I tried again, but a few days later I was back at it. I started running twice a week and adding distance each time. When I made it around the full loop a few weeks later, I couldnt believe it. Three months later, I was running three miles!

It was exhilarating to cross the finish line.

When Eric and I got engaged, in July 2005, I was down to 160 pounds. Besides our wedding, I had another event to look forward to: my first 5K. I was nervous on race day, but it was exhilarating to cross the finish line and see my parents and Eric cheering for me. By our wedding in August 2006, I weighed 145 pounds and felt perfect in my gown. Erics first words were, You look amazing. I felt like my hard work had paid off.

After the wedding, I signed up for a half-marathon. All those long-distance practice runs melted off 20 pounds, and in May 2007, the scale balanced out at 125. It was shocking to see that number! But nothing could compare to the high I felt when I completed the race that month. I figured I would do that half-marathon to say Id done one, but when I finished, someone handed me a flier for a half-marathon three months later so I ran that one too. And last year I ran two full marathons!

Just after my 30th birthday, Eric took me to Disney World and said, Want to retake that photo in front of the castle? This time around, I was wearing a size 4. We gave the new photo to his parents, who replaced the old one with it. When I saw those photos side by side, I couldnt get over it: I look like a different person! Eric always told me I looked good, even when I was heavy, but now were able to experience more together. We go hiking and boating together, and we recently went on a five-hour, 75-mile bike ride.

I returned to Disney in March with my mom to run the inaugural Disneys Princess Half Marathon. She recently lost 35 pounds and said that my weight loss had inspired her own health goals. Im so happy for my mom, and I also feel proud that I was a role model. My goal for the future is to stay healthy and continue racing. My mantra is, Nothing can stop me now and after how far Ive come, I truly believe it.

What Jackie Learned To Do:

1. EXPERIMENT. I always had it in my head that I didnt like vegetablesI wouldnt even eat tomato sauce. Then one time, Eric made me take a bite of a black bean taco at a Mexican restaurant, and I loved it! That made me more willing to try new things. The worst that can happen is I dont like something. Now I enjoy lots of different vegetables.

2. SNACK SENSIBLY. I didnt want to give up my nightly snack, so having a scoop of sorbet or hot chocolate after dinner kept me from feeling deprived. If I was still craving food, Id ask myself, Am I really hungry, or do I want to eat simply out of routine? Most times it was the latter.

3. SET YOURSELF UP FOR SUCCESS. When I first started exercising, I went to the gym straight from work. I knew that if I went home first, Id collapse on the couch and never make it.

4. SIMPLIFY PORTION CONTROL. After I was married, Id cook recipes that yielded four servings. Eric and I would each eat one serving for dinner, and Id pack up the other two servings in containers for our lunches the next day. It took the guesswork out of portion sizes.

5. BREAK IT DOWN. I never set out to lose 105 pounds; it would have been way too overwhelming. So instead I set mini goals and rewarded myself at each milestone. Id say to Eric, When I lose my next 15 pounds, can you take me to the movies or toBostonfor the day? Or Id buy myself a new outfit. Those fun rewards kept me on track, and they were a welcome bonus.

Fit To Be a Princess

Trade your (glass) slippers for sneakers to run Disneys Princess Half Marathon on March 7, 2010. REDBOOK is proud to be the official media sponsor of this race, which winds through the magical Walt Disney World Resort inLakeBuena Vista, FL. Tiara optional! Sign up at disneyprincesshalfmarathon.com.

The post Jackies Weight Loss Story appeared first on The Weigh We Were.