One of fashion’s most sought-after New York-based stylists, Gabriella Karefa-Johnson, is dropping a collection with Target’s Future Collective, a first-of-its-kind Target-owned brand featuring collections in partnerships with cultural influencers like Johnson with diverse points of view in fashion. Johnson’s impact on the industry is immeasurable. She’s built a name for herself by creating imagery for the likes of Vogue and working her way up to be Fashion Editor-At-Large, all while practicing what she preaches about being a plus-sized woman in fashion (and in general). She’s wearing clothing that doesn’t avoid attention to her body and embraces maximalism and different shapes to accentuate her body as she pleases. As an advocate for mixing prints with feminine and masculine energies, this collection reflects just that with tops and skirts featuring floral and abstract prints and pops of color.

One thing that makes Johnson the proudest of this collection is the excellent quality of all the fabrics used. The price point is also accessible, going from $10 to $50, with most items still being under $35. She grew up on Target’s clothing. Especially when back-to-school shopping came around, she knew she could count on going there to get a cool pair of pants for an affordable price. Even when she first started out working in fashion, she would turn to Target to get clothing that would fit the fashion world without breaking the bank. This collaboration is a full-circle moment.

The image architect takes time to speak with ESSENCE at Target Studios. Take a look at what she had to say about her design process. 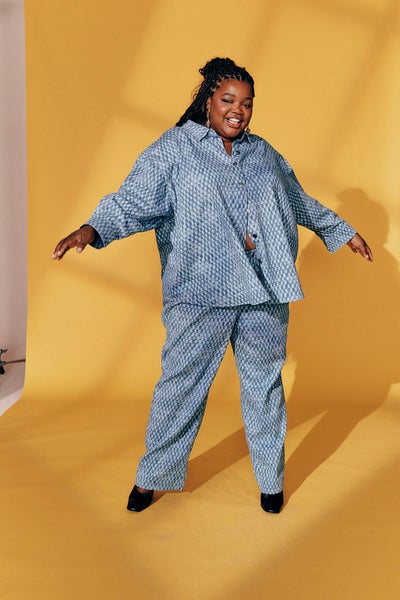 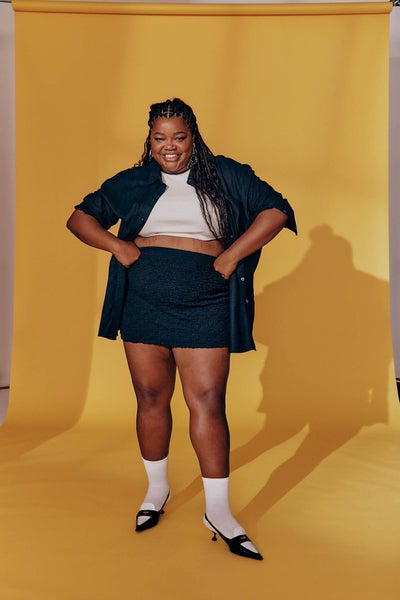 ESSENCE:  What was the design process of this collection?

Gabriella: Target approached me about it at the time Future Collective hadn’t been announced yet. It was under like a super secret codename. I had to sign like a million NDAs. I didn’t actually know who else was doing it until Kahlana’s [Barfield] collection came out, but then I saw the product once we were already in the design phase, and I was like, my impulse is right. It was like a very serious pursuit in platforming creative voices and giving them actual creative equity in the process. So, it was a really collaborative experience. It wasn’t fast at all, like we’ve been doing it for a year. This is almost a year to the day when we like started talking about it. I met with all the different Target teams, from fabrication to marketing, and we worked on the images. We ended up organizing the shoot together with me in it, and then also Target did their own in-store shoot. The process was very thorough,  from picking out swatches to approving silhouettes to seeing the first photos and feeding back as a stylist on like, “This fit needs to change this way, this fit has to be changed this way.” So, we ultimately got to a point of pure satisfaction with everything. It was really liberating and creatively fulfilling.

Was it easier or harder to design this collection with a background in styling?

I don’t know because I don’t know any different, but I will say what the challenge was like, deprogramming the idea that these clothes exist to make a picture. More of these clothes exist to live our lives in. I remember there was like one item that we were all kind of going back and forth about. Ultimately, I won, and it ended up being made; it’s coming out in a future drop. It was like one of those moments where I was like, as a stylist, I’m telling you these are going to be fab, and everyone’s gonna be obsessed with it. And then there were really brilliant expert knowledgeable merchandisers and buyers from the internal buyers for the Target team who were like, “Well, maybe,” but they were really respectful of the fact that I was, I think this is gonna work even though it was like a little bit different from what they normally offer. So trying to also realize that I haven’t made clothes before to this extent, and this is a company that has tried and true over many, many years to supply fashion to people. It was figuring out when to loosen the reins a little bit was a challenge, but in general, it was just a really chill process. We all agreed on everything. There wasn’t a huge hardship in having been a stylist. If anything, I think it helped. 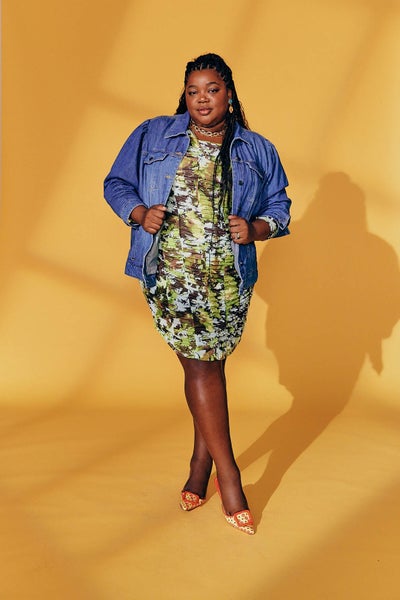 Who or what were some of the inspirations that you pulled from for this project?

Honestly, what was so interesting is that when the proposal first came to me, I think target had done really thorough research on picking their partners. So they had an idea of who I was in their mind, and it was actually very close to who I am in reality. So, there was real authentic inspiration from my life and how I dress and also my work and how I style. Then I was thinking the entire time about who I wanted to see in these clothes. So, I was really inspired. I’ve always been, in everything, inspired by my family. I pull a lot of like image research from old family photo albums; the women in my family have inherently iconic style, like most Black women, to be honest, so that’s a huge source of inspiration for me, but also, I grew up with the Target fashion collaborations. I remember the standard of the product being so high. I’m inspired to reach that same level. 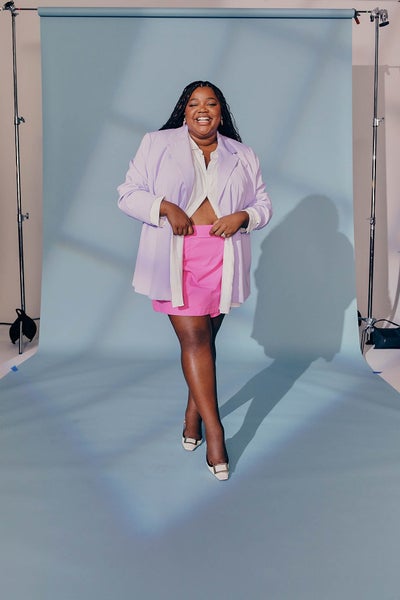 What were you most excited about throughout the whole process?

Honestly, I have like a very childlike wonder about this whole industry. So, even though I’m basically a veteran at this point, I still get very hyped and excited about things and thinking about how baby Gabby would react. This was not within the realm of possibility for me when I started my first internship in fashion; it was like, maybe I’ll get to be a stylist, and maybe someone somewhere in the world will see my photos, and now it’s like, I’m getting to influence and collaborate with a store that I shopped in as a kid that so many kids like me at the time who don’t have or aren’t interested in or don’t want to be spending thousands of dollars on their clothes. They’re gonna be able to go into Target now and use their allowance to buy something cool. I’m so excited about that. And kids going back to school like I literally know what would be my back-to-school fit if I was 15 years old, and I’m like, “That is so cool.” I would get the baggy jeans and put the cardigan over the cropped top. It excites me to think that there’ll be people engaging with a collection that I created with Target in that way.

Gabriella’s Target’s Future Collective collab will be ongoing throughout the year with three seasonal refreshes featuring over 100 items available starting on January 29th on Target.com and in select Target stories.