When it comes to men’s dress shirts, one of the more popular brands on the market today is Charles Tyrwhitt. Today, they have an expanded range of offerings, including not just shirts, but suits, accessories, and more. So, what should you buy from them (and what might you want to avoid)?

This is the third installment of our “What To Buy From” series, following our coverage of American brands Ralph Lauren and Brooks Brothers. Be sure to have a look at those installments, as well!

History of the Charles Tyrwhitt Brand

Charles Tyrwhitt Ltd. is a British retailer that specializes in dress shirts–but they’ve expanded their range in recent years to include ties, suits and suit separates, casual wear, knitwear, shoes, and accessories. It was founded as a mail-order company in 1986 by Nicholas Wheeler (whose two middle names are, you guessed it, Charles Tyrwhitt) when he was a student at the University of Bristol. During his second year there he became increasingly critical of the way his fellow students dressed, saying “They needed a decent shirt,” and he decided he could fill that niche himself.

Spending about £300 on five thousand leaflets and a simple Amstrad word processor, he started the business. It began operations in a small space on Fulham Road in London before moving to the prestigious Jermyn Street in 1997. 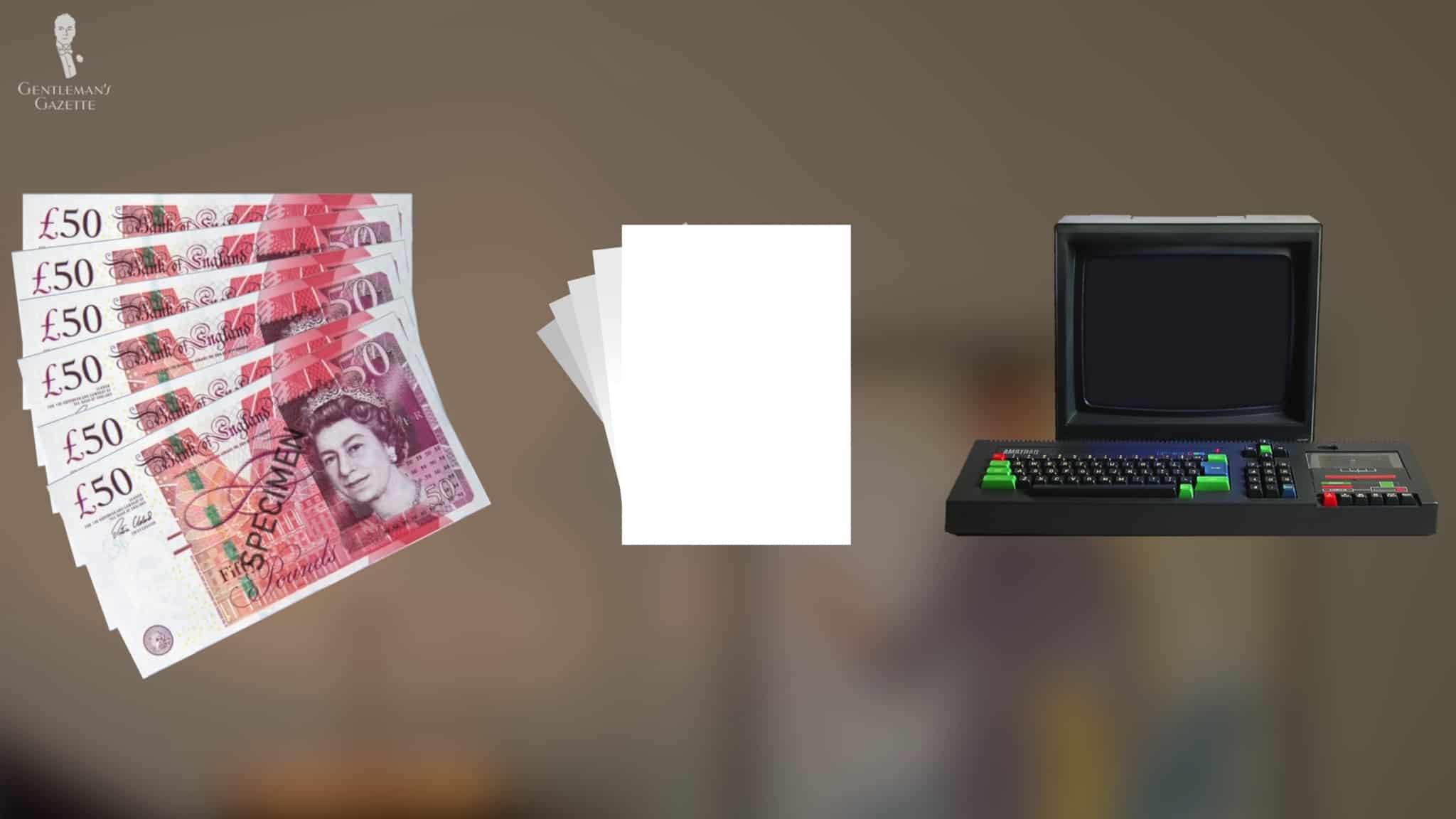 Nicholas Wheeler founded the business by spending about £300 on five thousand leaflets and a simple Amstrad word processor.

Tyrwhitt is also well-known for its mail-order catalogs. In fact, this is how I first became aware of the company back in 2011 or so, and I liked what I saw enough to place an order–which was the first of many! Tyrwhitt’s production formerly took place exclusively in England. In recent years they’ve begun outsourcing some, but not all, production to other countries including India, Romania, and Peru. 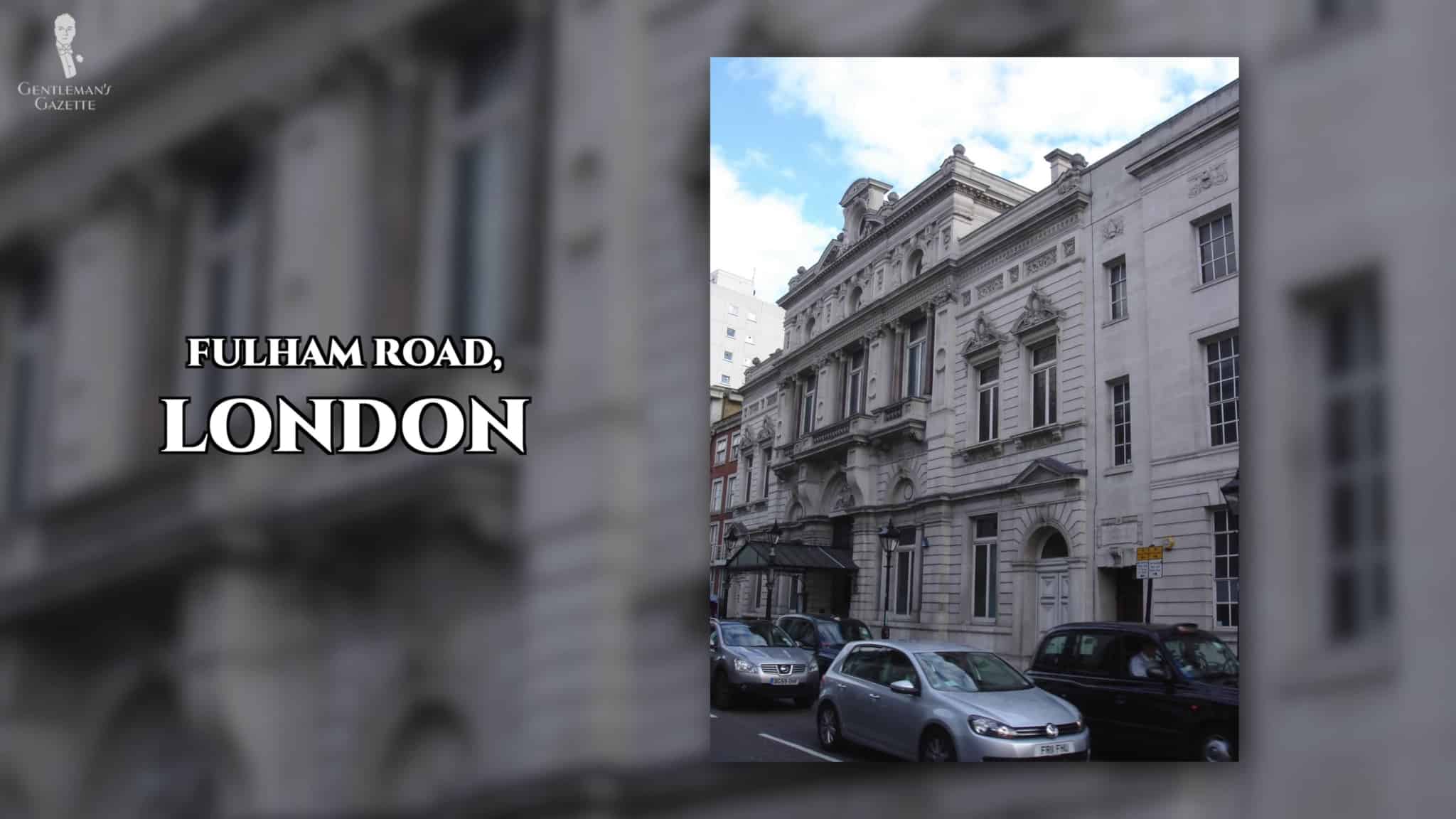 Still an active participant in the business, founder Nick Wheeler has a 95% stake in the company and has gone on record in interviews saying he’s got no intention to sell. As you might expect, he’s a menswear enthusiast himself. According to Wheeler, he once traveled the length of the island of Great Britain (from Land’s End to John O’Groats) on a bicycle in a pinstripe suit, dress shoes, and of course, a Tyrwhitt shirt. And, as a side note here, Wheeler’s wife Chrissie Rucker is the founder and owner of The White Company, which is a home furnishings retailer in Britain.

The current address for Tyrwhitt’s flagship store is 100 Jermyn Street. There are currently around 40 physical storefronts in locations including London, the greater U.K., Paris, New York and New Jersey, Washington D.C., Chicago, Houston, Philadelphia, and Massachusetts. Meanwhile, their online storefronts have sites dedicated to the U.K., Germany, France, The Netherlands, The U.S., Canada, and Australia. 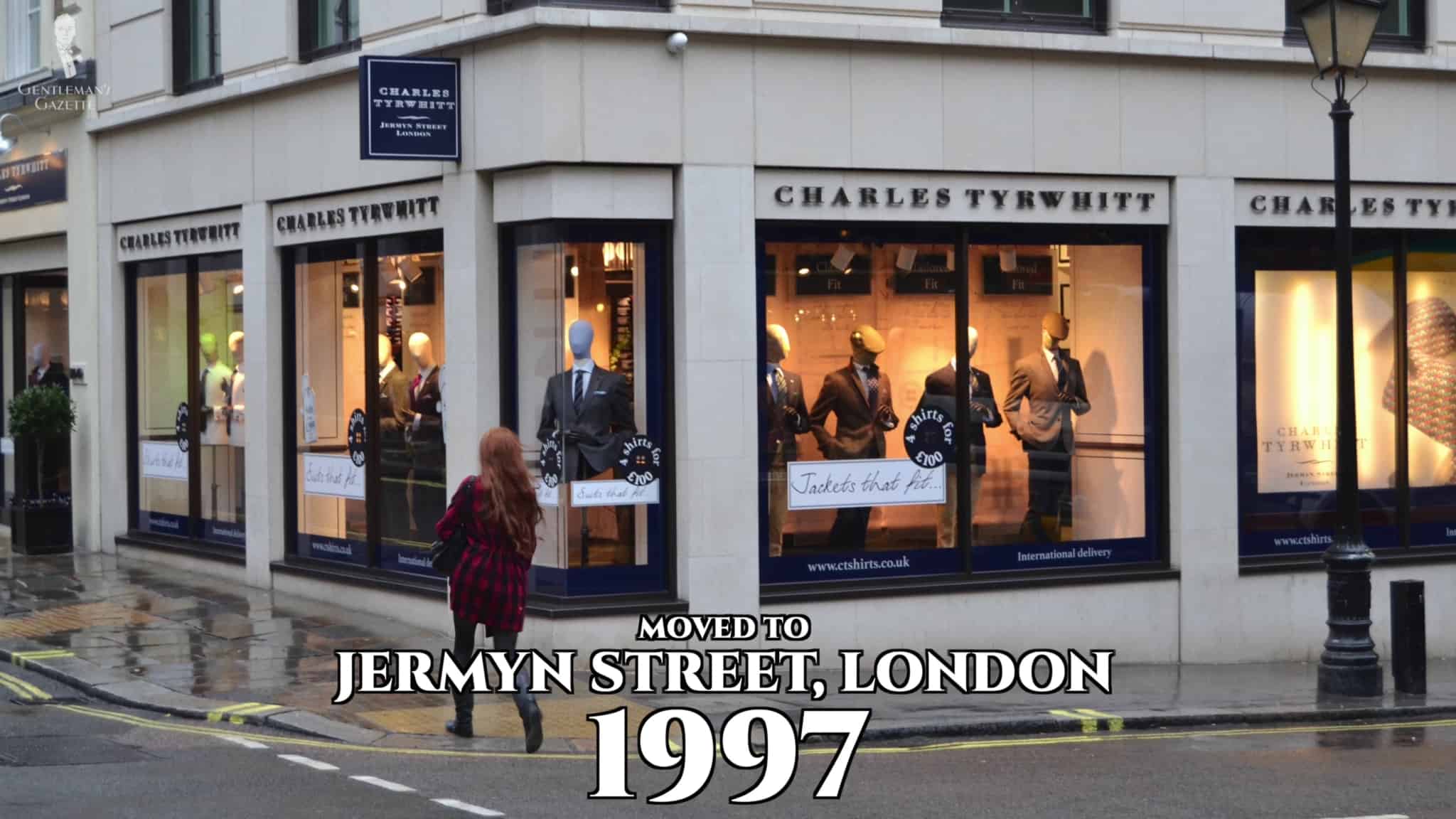 Charles Tyrwhitt moved its flagship store to Jermyn Street in 1997.

The customer service center is currently based in London & Milton Keynes, England. Customer service is actually a point of pride for the company. Their online reviews are generally strong, they’ve received numerous awards in the past for customer service, and speaking from a personal perspective, I have nothing but positive experiences regarding those times where I’ve had to return or exchange orders. They also offer a no-questions-asked, 6-month guarantee regardless of a product’s condition. I haven’t taken advantage of this guarantee, but all of my Tyrwhitt orders have held up remarkably well (and some of them are almost ten years old at this point). 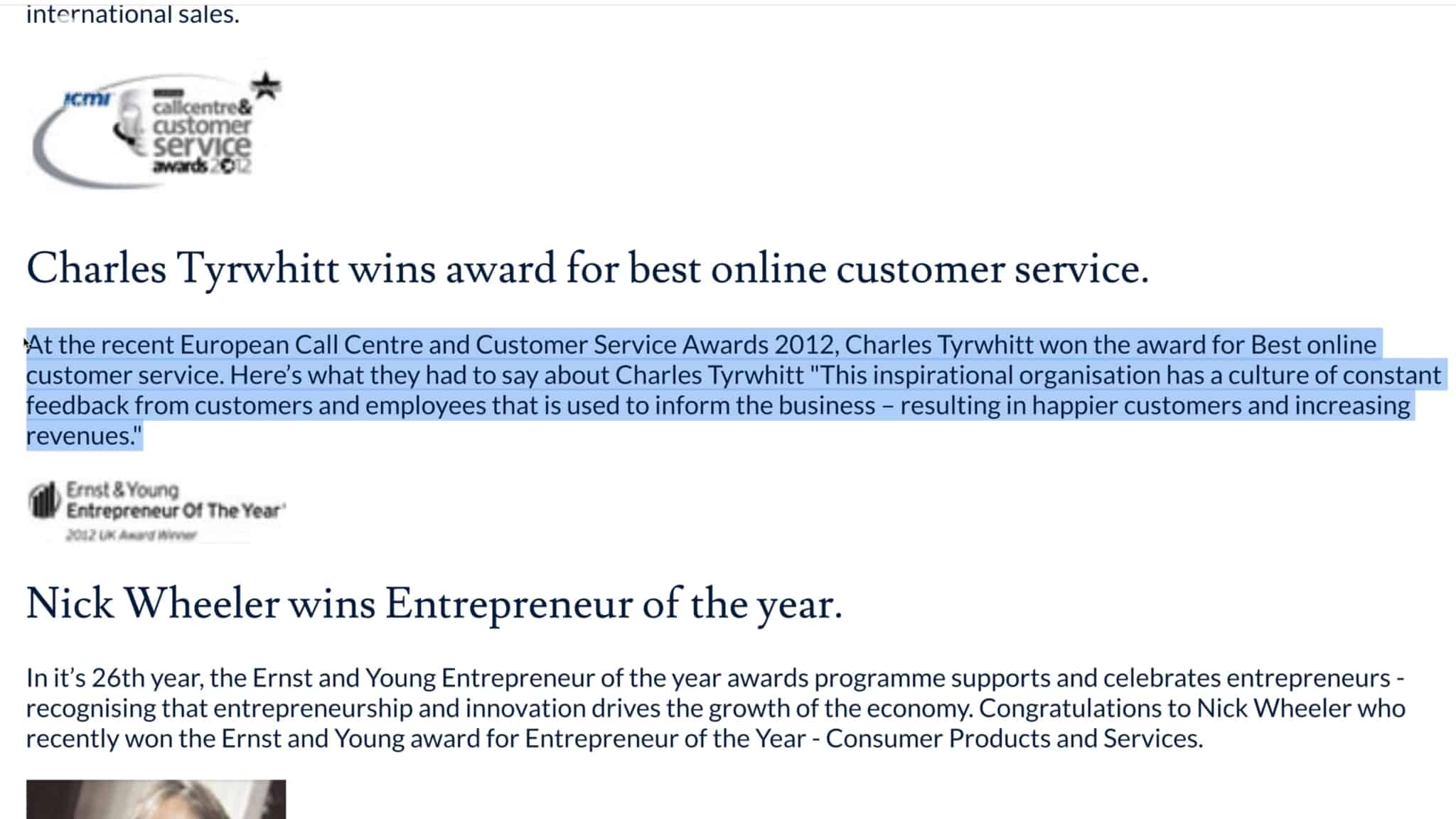 Charles Tyrwhitt is well-known for its excellent customer service.

Notable customers include former UK Prime Minister David Cameron, President of Rolls-Royce Motorcars North America David Archibald, and Lord Sugar–British business magnate and founder of the tech company Amstrad (the brand of computer that Nick Wheeler used when he was starting the business). With around 750 employees and over 1.5 million customers, the business has definitely grown since its beginnings. So, it’s no wonder that many of our commenters have been asking us to cover it in this series!

Our Experiences with Charles Tyrwhitt Menswear

Charles Tyrwhitt, to this day, is still most well-known for its range of shirts. Dress shirts are their cornerstone and are offered in a wider variety of fits than many retailers. Not only do they have a classic fit, but they also have slim, extra slim, and the relatively new “super slim.” When I first purchased from them back in 2011, I assumed that a slim fit would be relatively good for my thin frame. However, this was before I knew how to properly take my own measurements, and I’ve come to know that these slim-fit shirts are, in fact, much too big for me.

The construction of the shirts is of high enough quality, though, that I decided I could keep wearing them–and indeed, because I usually wear them below another layer these days, the fit isn’t so much of an immediately apparent issue. That said though, when I do make future purchases, I plan to experiment with their extra-slim and super-slim fit options. Their dress shirts all come with complimentary brass collar stays, so I have accumulated quite a small pile over the years. 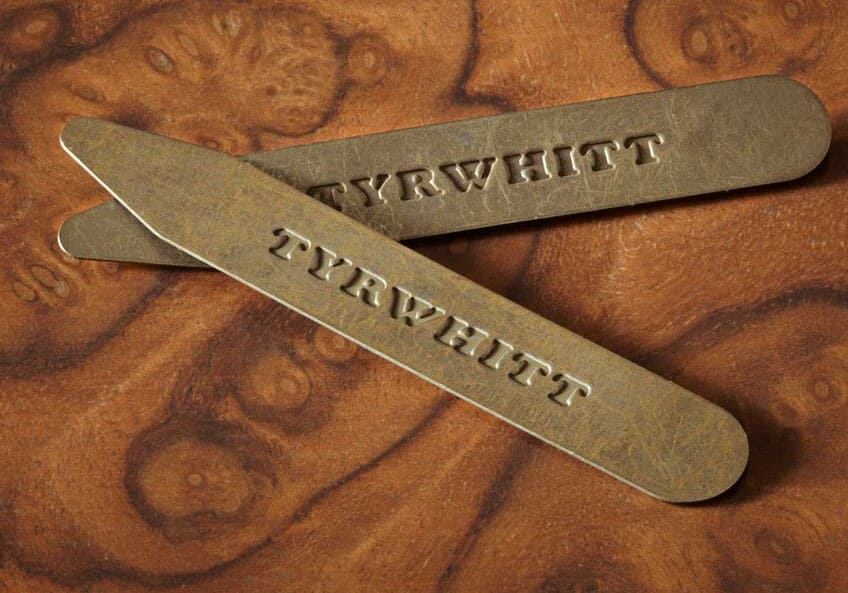 Tyrwhitt also offers casual shirts including short-sleeve button-ups, polos, and flannels. Rather than coming up with collar and cuff measurements, these shirts usually fall into the small-medium-large fit scheme. Again, speaking personally, I haven’t tried their polos yet but I do have one flannel shirt which again, is large, but fits comfortably, and a handful of short-sleeved button-ups. While we have mentioned in other posts that short-sleeved dress shirts aren’t a good choice for business wear, I’ll typically wear these shirts casually in the warmer months sometimes untucked or even with shorts, and I often prefer this lighter weight of shirt to something like a conventional polo. 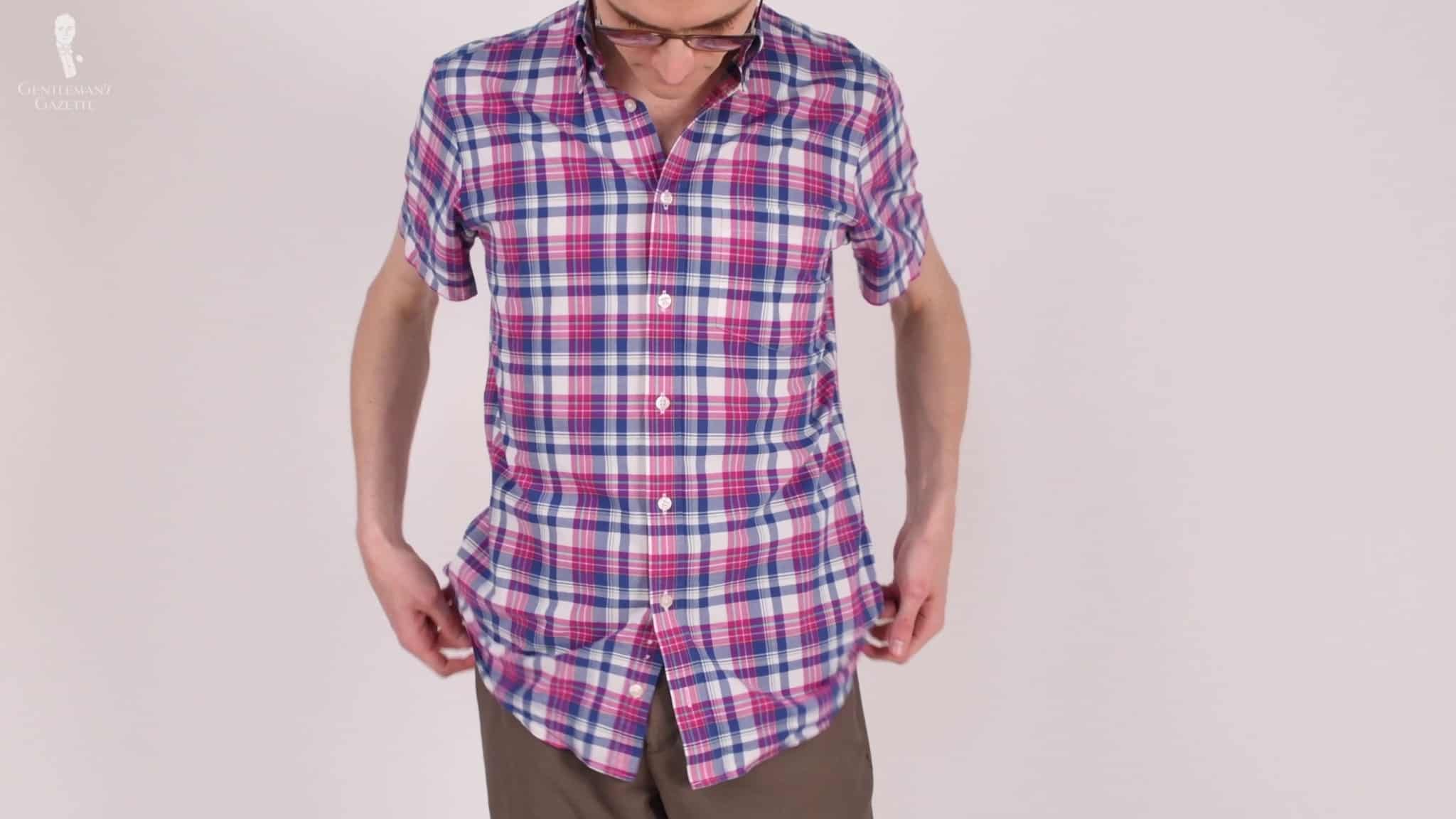 The other Tyrwhitt item currently in my collection is a wine-colored merino wool cardigan sweater. It’s quite comfortable and durable, with only the label tag having come loose. Rather than machine washing, I’ll usually just spritz with vodka (one of our favorite garment care techniques). 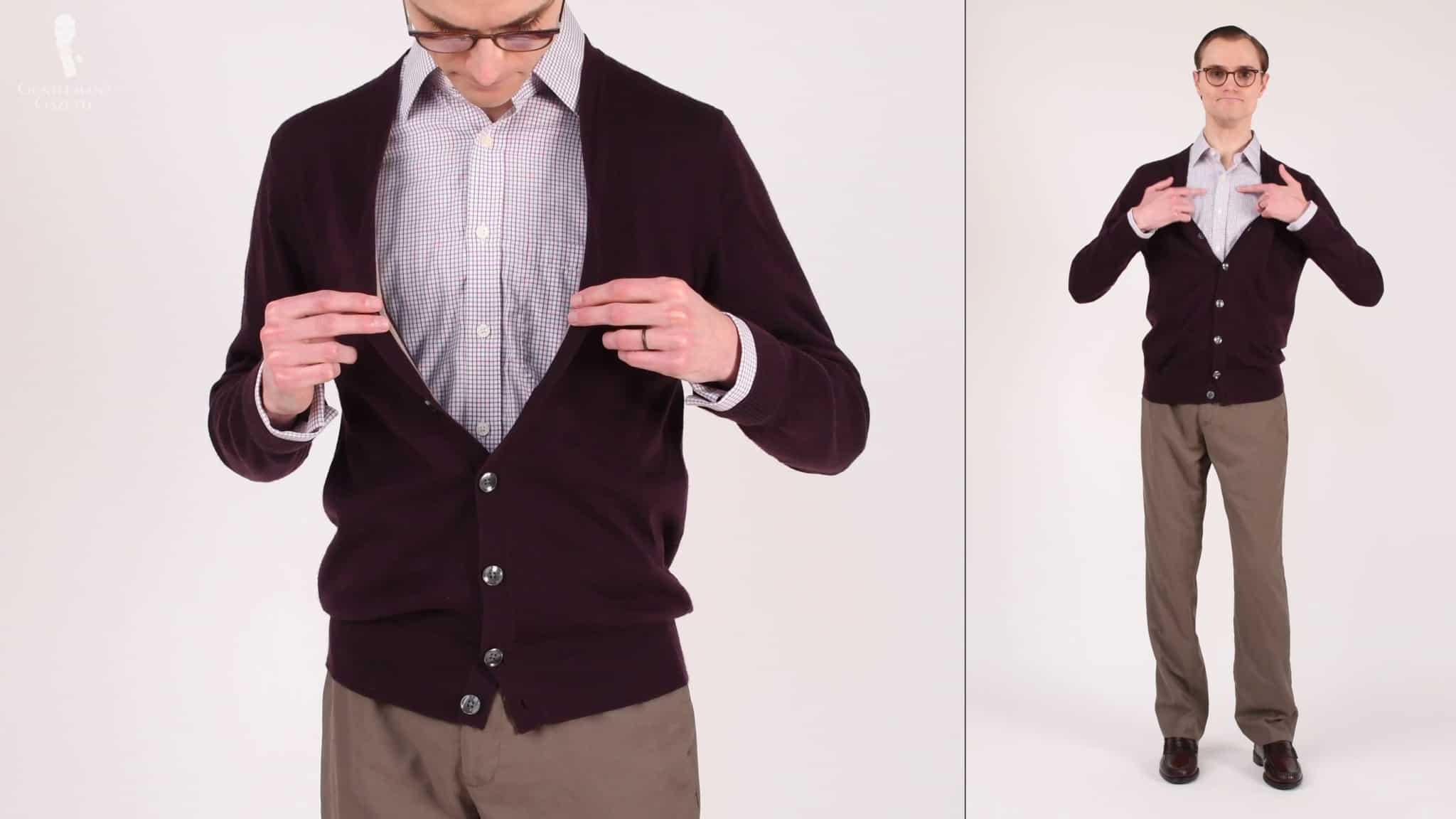 Overall, my experience with Charles Tyrwhitt has been very positive. They were my first foray into made-to-measure shirts, and everything I have ordered from them has held up pretty well. I’ve had to return a few items based on fit discrepancies, but this has always been a smooth process. And once, when a shipping box was so damaged in trans-Atlantic transit that some of the shirts were lost, working with the customer service team was a prompt and pleasant experience.

To go beyond my personal experiences for a more complete list of what to buy and what to avoid, we reached out to our Gentleman’s Gazette community on both YouTube and Facebook. With a sample size of about 250 responses, what follows is a compilation of the feedback we received.

What To Buy from Charles Tyrwhitt

In the broad strokes, dress shirts were, perhaps unsurprisingly, the top favorite. The variety of styles and fit options, as well as the ability to modify collar size and shape, sleeve length, cuff style, and other details for a small fee, earned high marks. A number of commenters did echo my sentiments that all of their fits tend to run a bit large overall, so this is something to keep in mind. 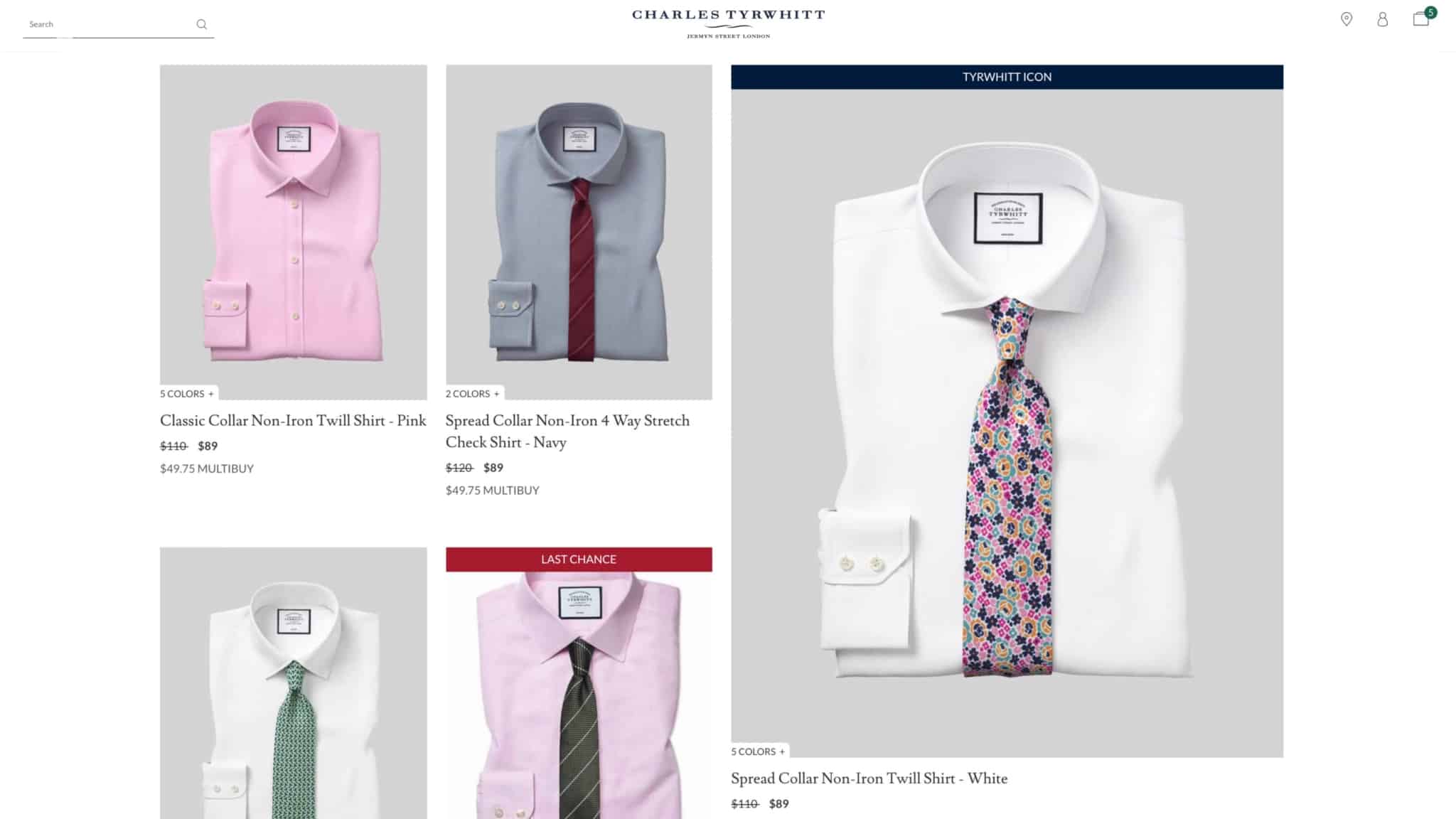 Tyrwhitt shirts are a top favorite among our online community members.

In terms of quality, the consensus is that while not rising in the level of something from a bespoke shirtmaker or a traditional English or Italian atelier, Tyrwhitt shirts are comfortable, durable, and perfectly serviceable business wear. Of course, I would agree with this assessment. Given that Tyrwhitt is also well-known for its frequent multi-buy sales, the quality-to-price ratio is definitely high (and this is good for the budget-conscious, as many student commenters pointed out).

Another favorite was Tyrwhitt’s range of ties in smooth silk or grenadine. Buyers seem to appreciate the quality of construction as well as the wide range of colors and patterns that are available. Other accessories including pocket squares, cufflinks, scarves, and even umbrellas also got high marks, overall. 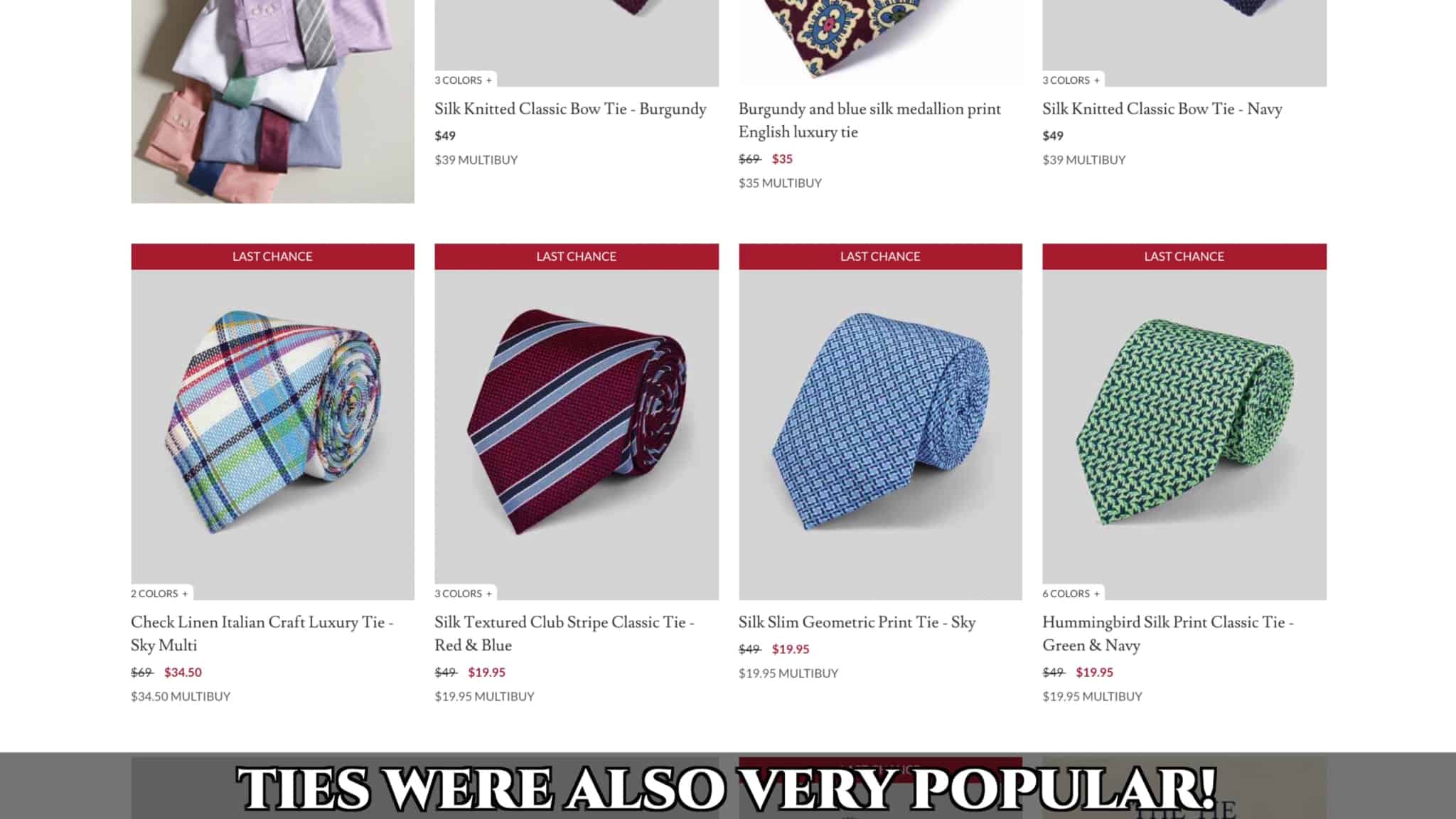 Buyers are also in favor of their smooth ties and grenadines.

Another range in the yes category would be that of knitwear. Their sweaters–or jumpers, as the Brits would say–seem to be of high quality, as my wine-colored cardigan would suggest. Commenters praised not only cardigans, but also v-necks and turtlenecks as well. 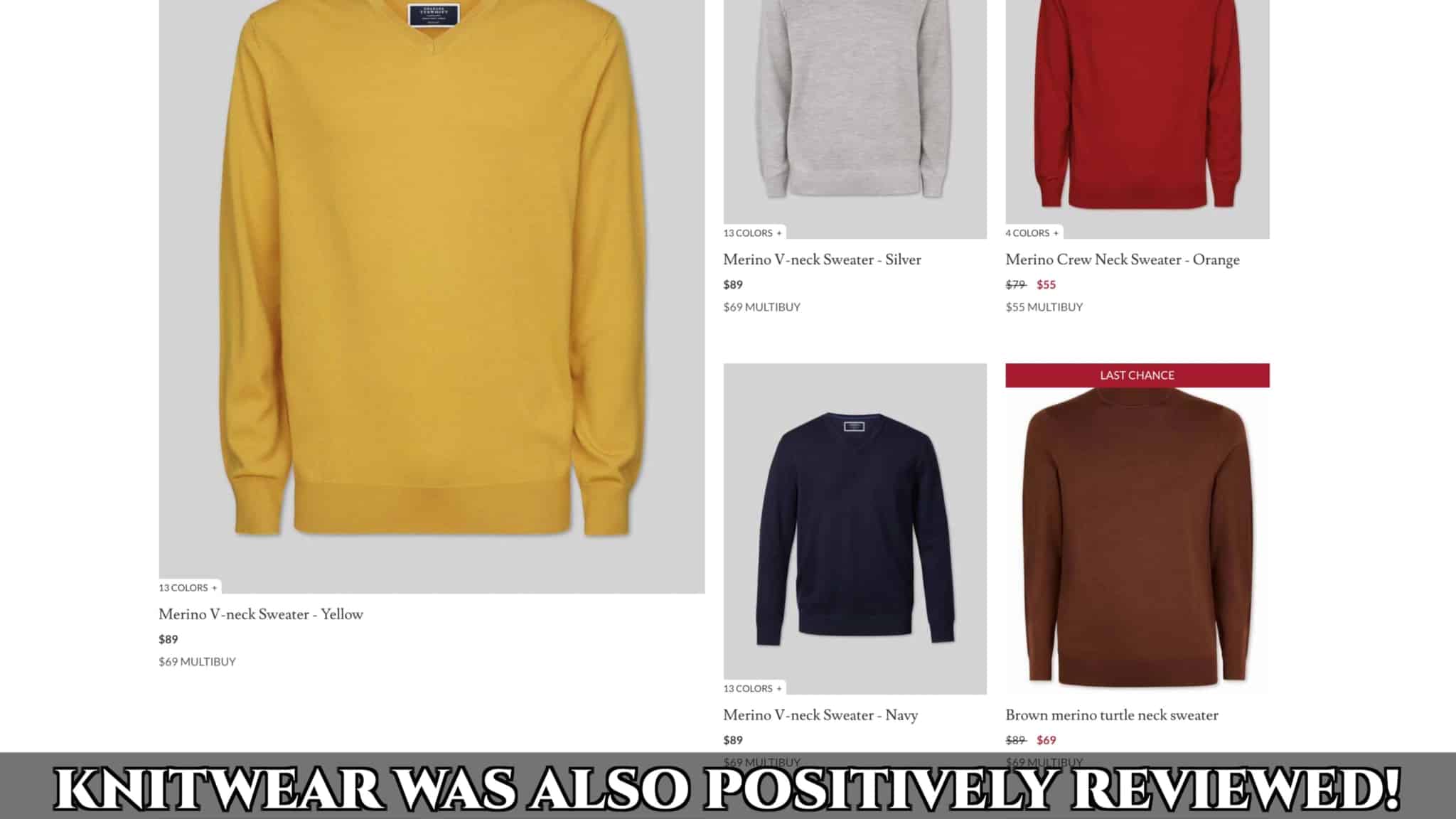 Their knitwear is also a crowd favorite.

Commenters are also generally happy with Tyrwhitt’s overcoat offerings in various styles and as well as their odd jackets, including blazers and sport coats. 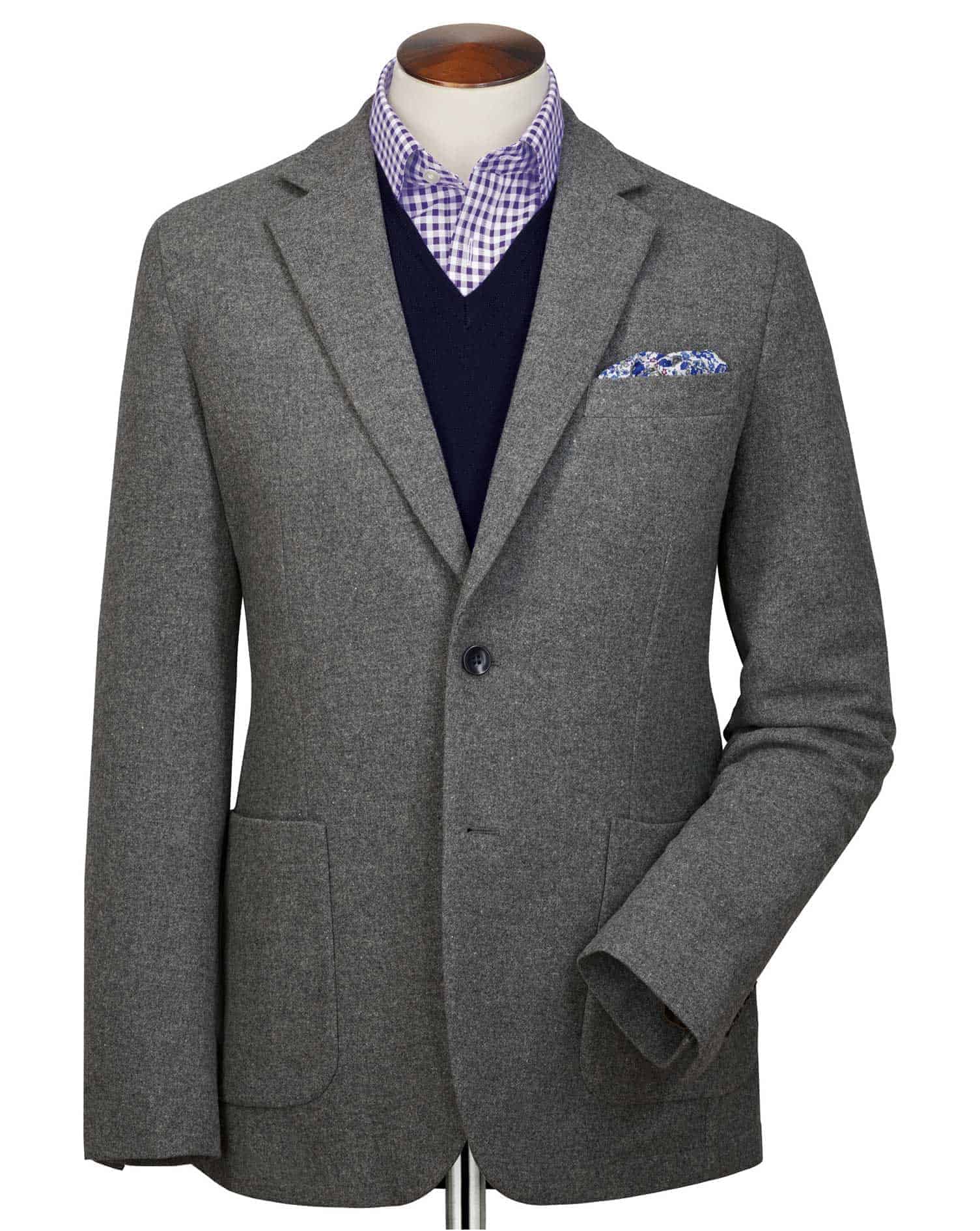 A sample sport coat from Charles Tyrwhitt, this one in gray flannel.

Finally, here, a few responses also spoke positively of Black Tie offerings like tuxedos and dinner jackets, and we’d be remiss not to mention that Tyrwhitt does offer some morning dress options as well. 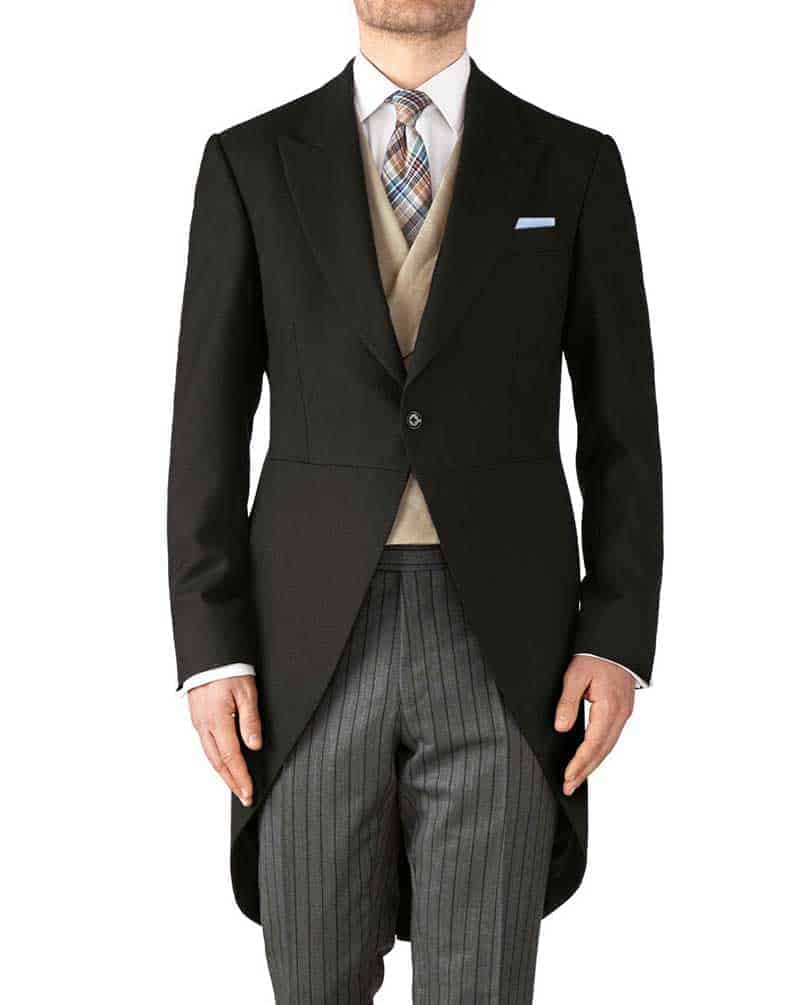 Next up, we’ll cover some items that received generally more mixed feedback from our review pool.

Some commenters had positive things to say, appreciating the variety of patterns and subtle details, like a double boutonniere loop on the backs of the left lapels. Others, however, found fabrics to be more of middling quality, fit a bit hard to nail down, and some other details to be more trouble than they’re worth, such as working cuff buttons on sleeves (as these make alterations more difficult). 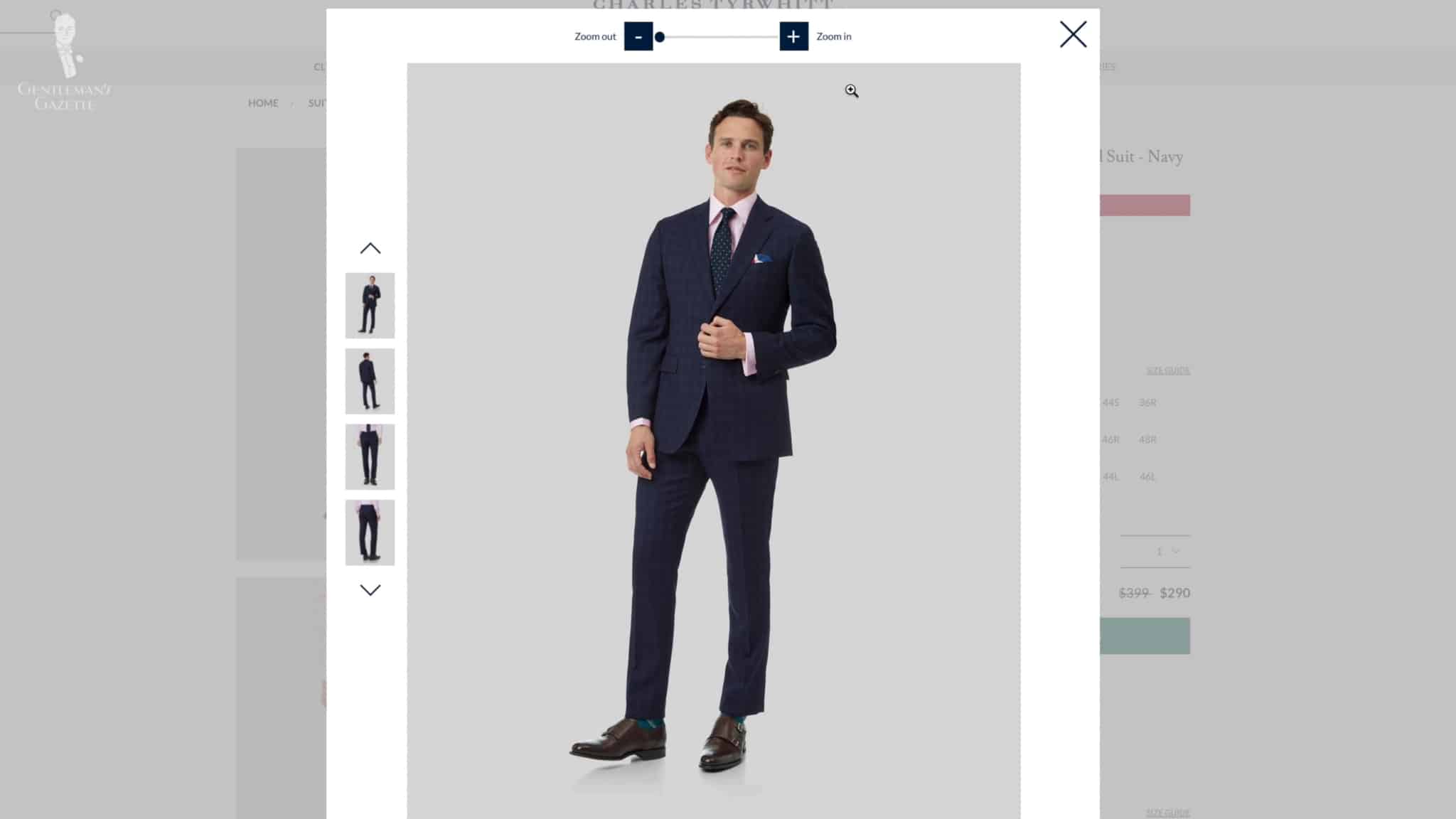 Their suits have mixed feedback from the commenters.

Also in this category would be shoes. While some commenters have had good luck with Tyrwhitt’s shoes in terms of both comfort and durability, others have found their footwear offerings to be more middling. In particular, one detailed comment made note of the fact that casual shoes like boat shoes were relatively durable, but that one should pay attention to the country of origin when it comes to dress shoes. Those made in England–particularly in Northampton–are of high quality, but those made elsewhere, perhaps less so. 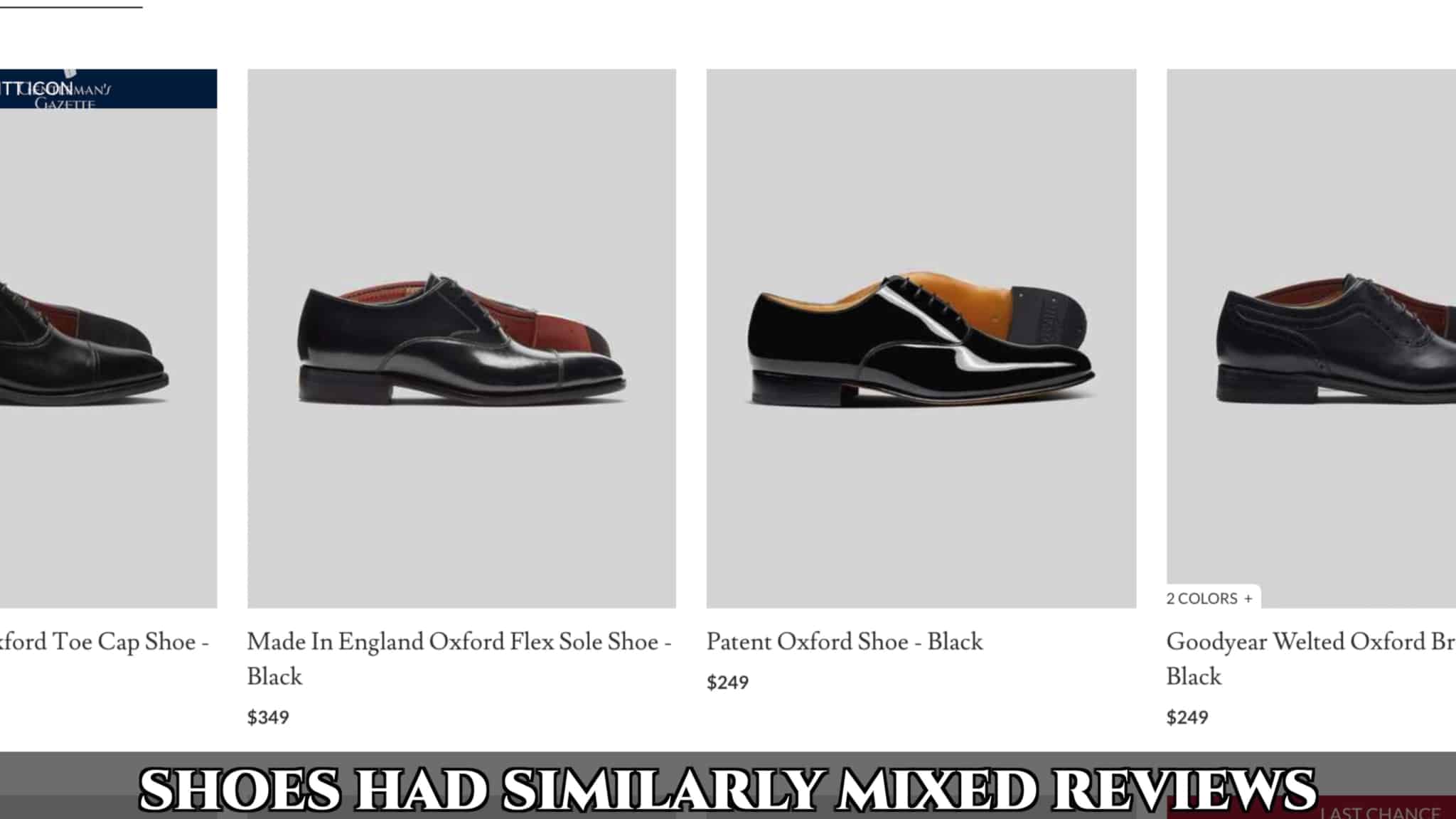 Tyrwhitt’s shoes, too, had some mixed reviews from the community.

What Not To Buy

Finally, today, let’s cover the offerings that most of our commenters suggested to steer clear of: trousers. While a few commenters thought that less formal options like chinos and corduroys were of decent quality, most suggested that in terms of both inconsistent or unflattering sizing and lower quality materials, most ranges of Tyrwhitt trousers weren’t worth their price. At the time of this review, their only pleated offerings were formal morning trousers (and also, curiously, models with drawstrings) and commenters noted the lack of traditional high-waisted options. 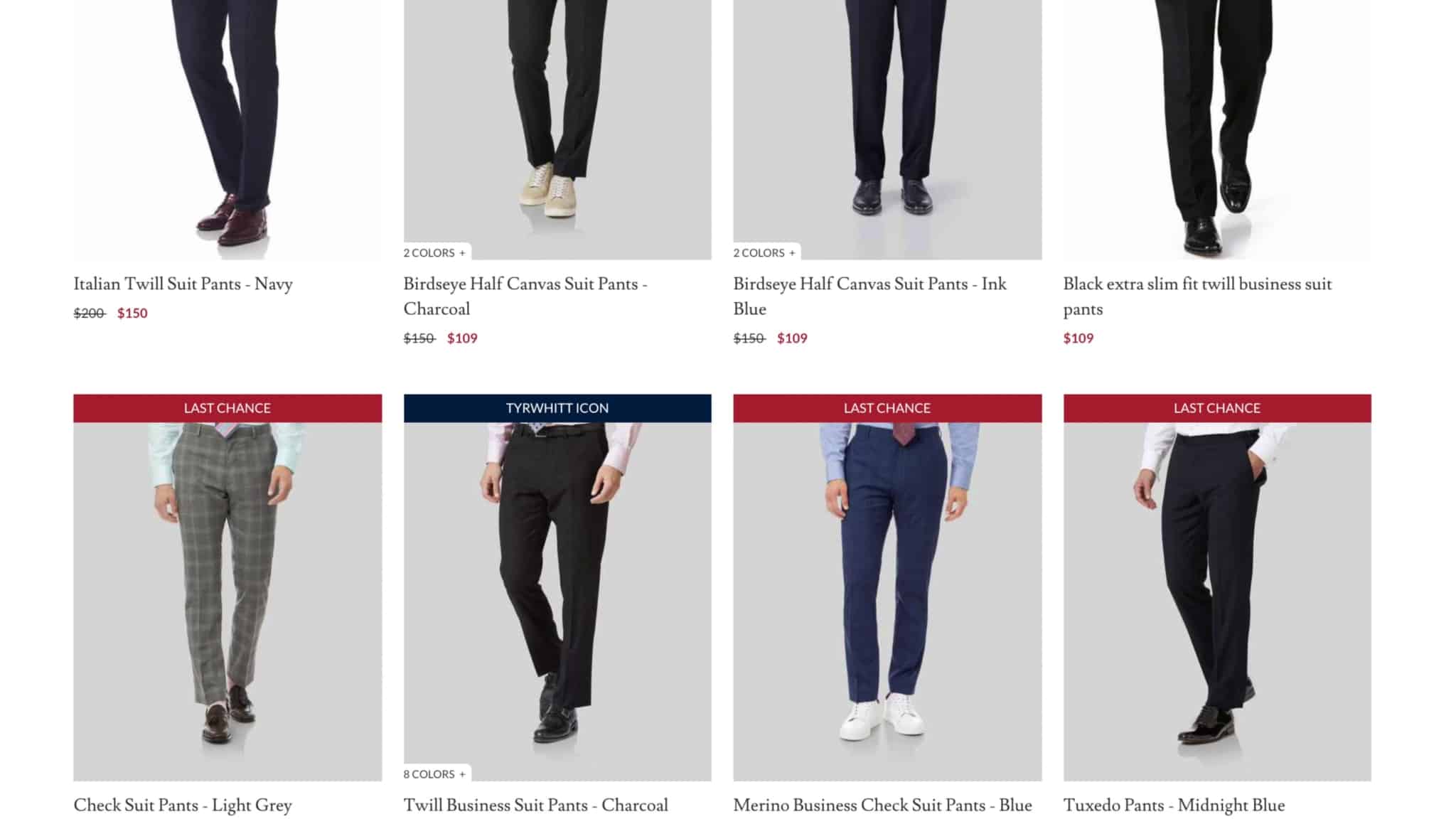 Most of our review pool was not in favor of the trousers from Charles Tyrwhitt.

To reiterate, my personal experiences with Charles Tyrwhitt have been positive, and indeed, their shirts are among my most complimented menswear items. Still, we hope that our community survey has provided some additional insight on what to buy (and what not to buy) the next time you’re shopping with Charles Tyrwhitt.

What are your experiences with the Charles Tyrwhitt brand? Do you have any favorite pieces from them? Share with us in the comments!